Even when we enjoy living our modern life, we still look back to the past. At school, students are taught about World War II and how it had damaged Europe’s economy. Nowadays, gamers all around the world can enjoy a diverse range of World War II-themed games such as Battlefield 1941, World of Warships, Day of Defeat, etc.

Yet, one game that has stood out among all of those is “1941 Frozen Front Premium”. The game was originally released by HandyGames in 2013 and has been warmly welcomed ever since. Many people may wonder why it is so well-known and played by such a large number of players. After this review, we have to agree that “1941 Frozen Front Premium” has got the features that players are looking for in one game.

“1941 Frozen Front Premium”is a turn-based strategy game, which reflects many horrible aspects of the famous battles in 1941. You will play as the German commander, leading your army towards the East, or defend Russia on the Soviet side. You can select between a number of infantries, planes, and tanks as you wish.

Before starting your journey, you will be given a brief informative tutorial that helps you with your future battles. During the game, in the snowy Eastern Europe, you can command an army of troops and various vehicles in a number of different battles. Players will have to use their intellect, with some luck, so that they can lead their own army to defeat the enemy in an instant.

Each battlefield is split into hexagonal blocks so that you can handle and position yourself effectively. All you have to do is simply tap the desired block to move your tanks, soldiers, or planes. Attacking the enemy is effortless, and you certainly do not have to be a military strategist to win the battle.

Starting off the game, you are given a set of units to go with, a supply depot to build more units, and a foggy landscape that you have to clear in order to find and defeat the enemy. Moreover, when attacking an enemy that players encounter, they often take damage in return.

Your unit will be destroyed once it has taken too much damage, yet it can be repaired with resources from the supply depot. Remember to use the resources carefully because they are finite. 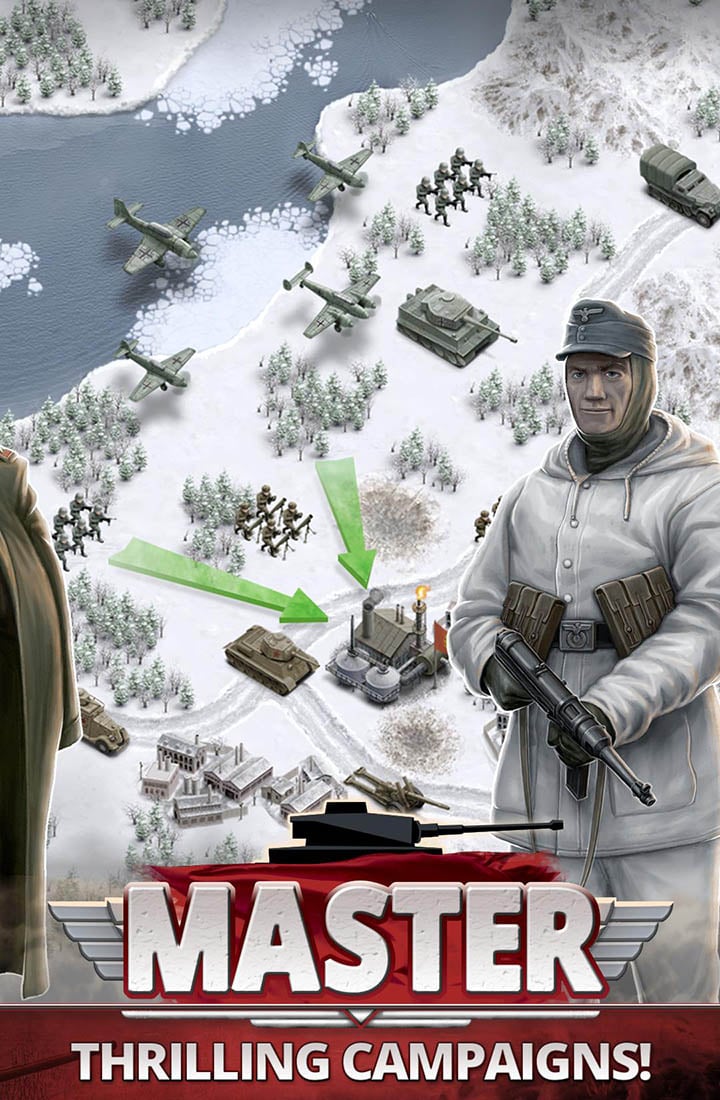 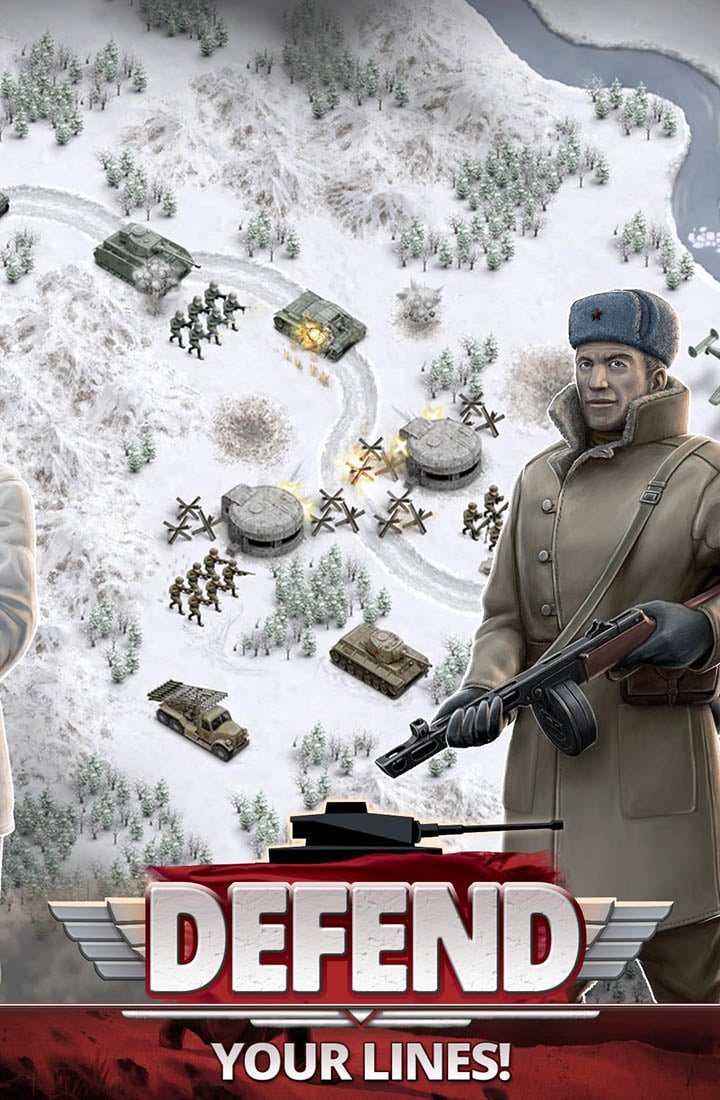 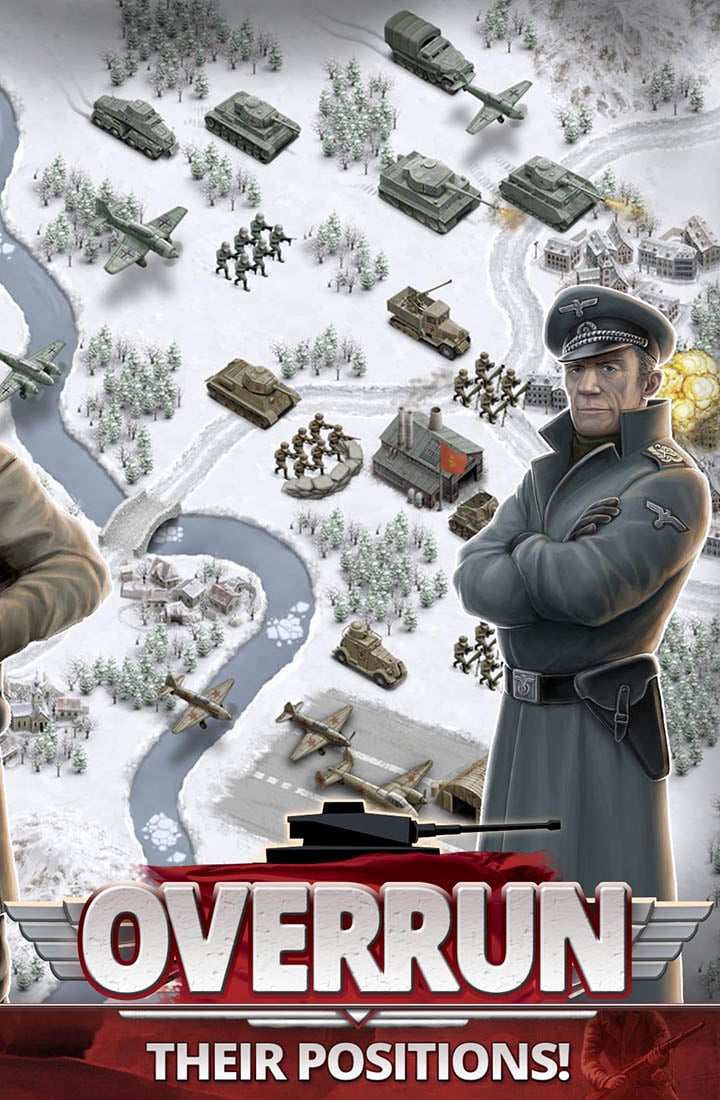 Each task has a different type of enemies with different units in a different location on the map. There is a diversity of objectives for you to complete. While enjoying the game, you can be asked to capture the supply depots or wipe out the opponent’s forces, destroy a certain number of units to weaken the enemy’s strength, etc. If players wish to have a better score, extra gold, or medal, they can replay the match.

Just like other games, completing a mission will gain players rewards such as a score that contributes to their rank, and a set amount of gold. If players complete all objectives of a mission, they will receive a medal that will give them a bonus score.

Going in the battles

Your army consists of 2D soldiers and units moving around a hexagonal grid map. Each player is given a certain amount of action points, which can be used for moving, attacking, and other activities. When your move is made, you must end your turn and wait for the enemy’s response.

Since units are the target of the rival, resources will be used frequently to repair the damage. This action will lead to the lack of in-game repair supplies, and instead, players can use the gold which is collected from the fallen enemies. The units also have limited ammunition, so you can restock them using gold.

In order to stand stronger and last longer in the battle, the units have the ability to dig themselves in for protection with additional supply trucks darting around the battlefield, providing health and resources, so make sure a supply truck is close to your more powerful units. Some areas are covered with fog, encouraging you to send out scouting parties to track down wreckages.

The game is divided into two modes: single-player and multiplayer. Single-player is the basic mode that players have to complete objectives as I have mentioned above. In the single-player mode, there are five military operations, consisting of four levels, and players will need to perform the job in each level.

On the other hand, multiplayer mode allows you to play with up to five friends on one device. The features stay the same for this mode, the only different thing is that you get to play against your friends. There are two different kinds of supply depots: German and Russian. The German one has a large tent with some crates, a tower, and some sandbags, and an MG-42 on top. In contrast, the Russian has a shack with some crates, barrels, a Russian flag, and an MG. The supply depot’s main ability is to have large supply storage. In some missions, the enemy’s supply depot cannot be captured, and unless they are destroyed, they can provide infinite resources. After knocking it down, a supply depot will reward players with amazing prizes.

The MG-42 works similar to the Bunker. It has less health than the Bunker and deals less damage. You will likely start with one or multiple MG-42 Positions if you play as the German side. They can destroy most infantry units in a close distance in one shot but need resupplying after firing four times.

The game is originally sold on Appstore and Google Play for $4.99, but with the APK version, players can enjoy “1941 Frozen Front Premium” for free.

The game is well-designed in 2D art style with stunning high-resolution landscapes. The battleground turns into a newsreel color effect when it is the enemy’s turn, which is such a nice visual touch.

The soundtracks and sound effects are also well done, making you feel like you are truly in an intense epic battle.

To sum up, 1941 Frozen Front Premium APK is an excellent turn-based strategy game, suitable for gamers who are interested in WWII as well as thinking strategically, or for everyone because the game is not too hard after all.