Now, the game is available for Android devices. However, you can also download Football Field Kick for enjoying on desktops or laptops. You know, the more practicing, the better you get.

The game offers 3D graphics with variety in shapes, colors, contents, and challenges. The field to kick stretches from a regular grass field to street scenes so that players get to change the vision and also develop tactic moves.

Having Football Field Kick means pocketing a little entertainment for your solitude. You can still elevate it into a competition with friends and families provided people to have the game installed. When people only see their own business, having a little game to share may pose a significant bonding moment.

Are you ready to make friends with this game?

Football Field Kick is a game of solitude which presents the player as the only person on display. You will get a sight to the soccer player so that you can control his kicking. Characters appear in either male or female features, depending on the user’s choice. Hence, you do not get the virtual vision like seeing with the eyes but feel like a coach.

Fields that the ball may go through are almost unlimited. The further you reach, the broader view you can see. Scenes around where the ball can reach will expand every time you reach the 500m-milestone. The graphic offers you a diversity of fields so you can barely get bored. Space moves from a regular grass field to familiar spots in the park near your house, neighboring streets with many parked cars, lampposts, and trees. You get all the necessary obstacles in moving the ball, such as walls, tree pots, poles on the street, cars, hills, and so on. The game, therefore, will pose not only a simple kicking game but more tactical and challenging.

The best and easiest way to enjoy the game is to kill time alone. However, you can also declare your challenge to friends and families. It would be more like a cyber-bonding activity than the competition.

For customization, you have hundreds of balls to choose, of which something is extraordinary to kick. Options for customs also vary in colors and patterns. The characters are verifiable to your gender if you would like to. Missions and up-gradation during the game also change level to level so that users find interested always.

With Football Field Kick, there is no end. You could go as far as you can.

The game has been developed several times, and now, the latest version is 1.21, which offers better graphic and smoother interaction.

In the latest version, there remains the joy of kicking the ball but in better quality. The library for characters, spinner, and balls never seems so abundant—some show extra fun to choose.

The game remains its missions that consist of numerous requirements to get you up to the next level. The background scenery shows more scenery. Besides the center field, surrounding areas appear with more details; therefore, more gifts and obstacles pose on the bouncing ball.

The new version allows users to play both online and offline with minimum differences. It would be one of the best games for killing time for simplicity and endless refilled thrill.

How to Play Football Field Kick

Getting to know the game, you will be shocked because of its simplicity. There is merely a rule: kick the ball as far as possible. No sooner you see the display will you know how to do it. But, to save you from wasting the first minutes in confusion, here comes the instruction to play as below. 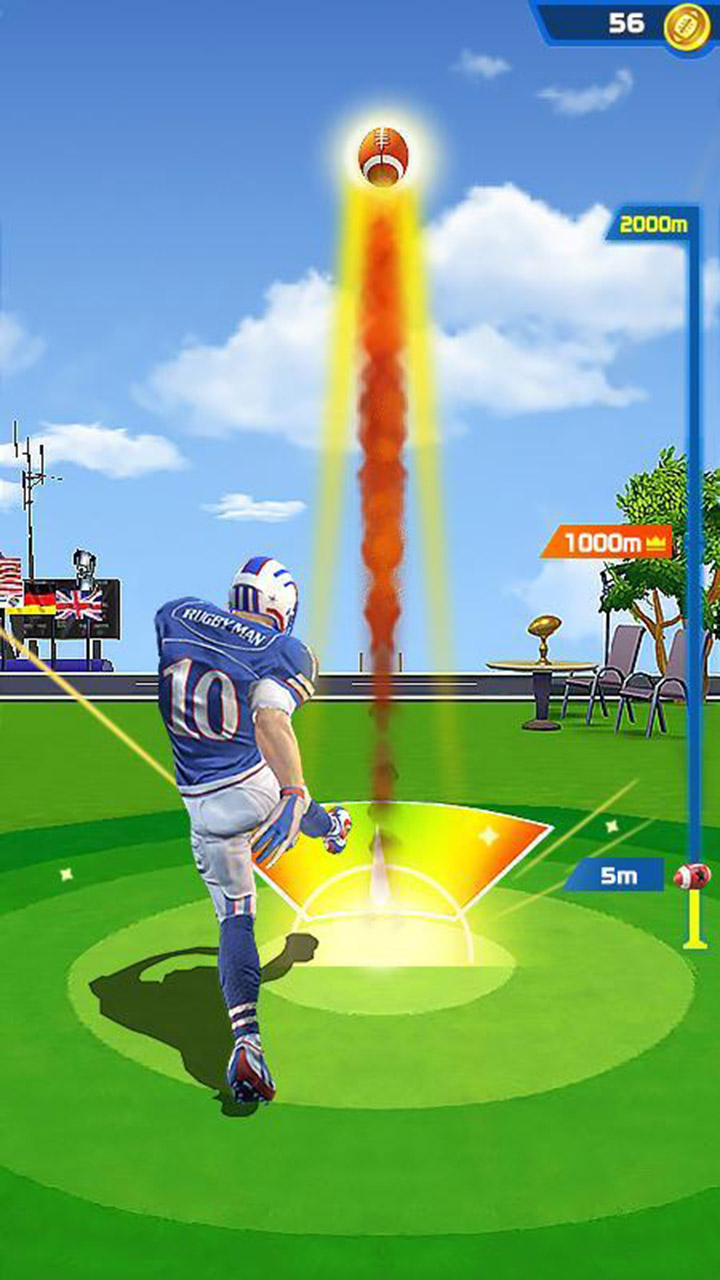 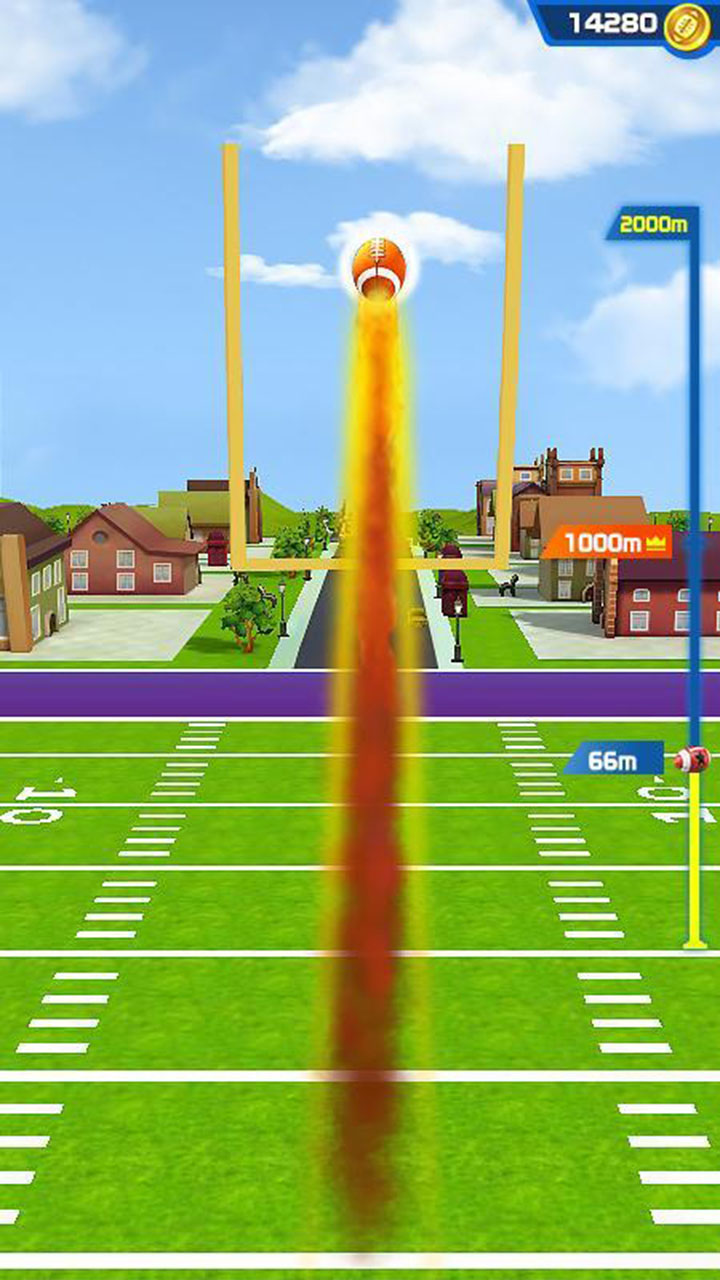 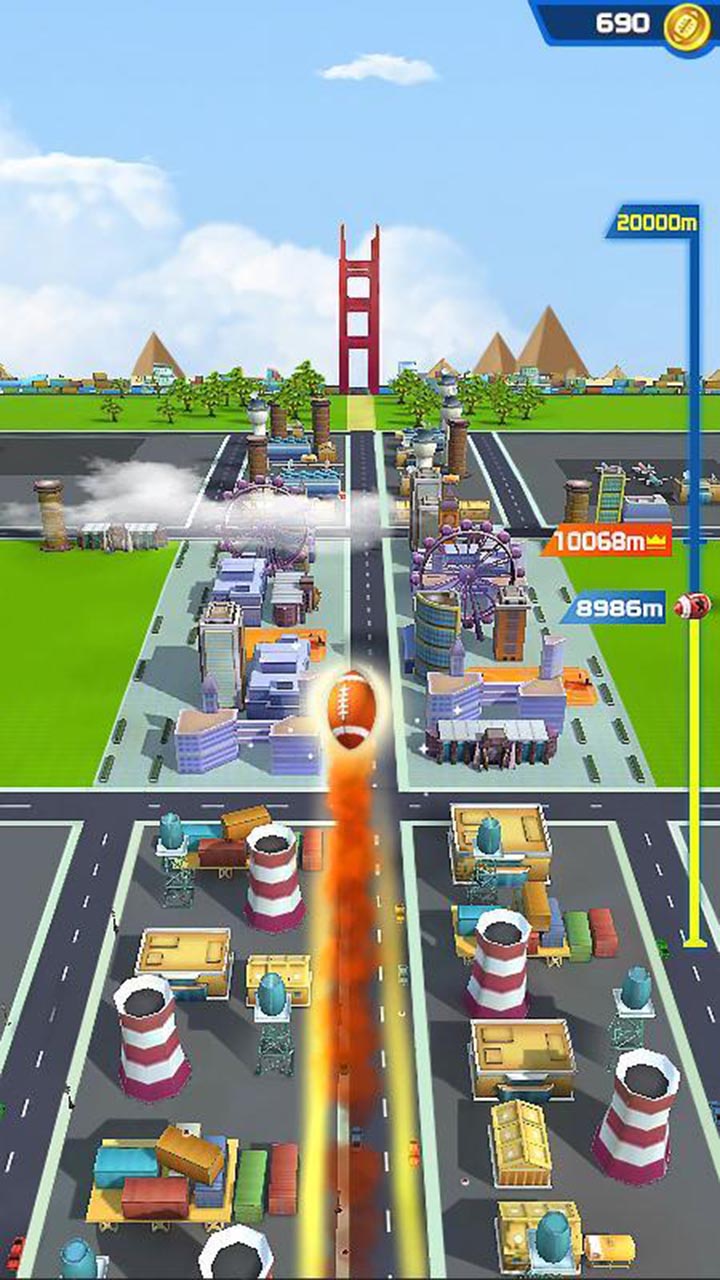 How to customize your character?

In the beginning, the character and ball are all chosen for you. Accessing other options is only allowed at the next level. That means you have to invest your time in playing the game to have more options.

Unlocking balls is easier. Every time you go up to the next level, a new ball is available in your accessories. The new character only pops up when you complete a certain number of missions. So does a new dial plate.

You can quickly level up by reaching a new milestone, which is marked every 500 meters. The tip is always leading the ball to go in the middle where few obstacles get in your way. The sideline presents many hills, trees, poles, and houses that can stop the ball.

How to reach a new level?

The most important of the game is bringing the ball as far as possible. The further the ball goes, the more coins you will get. Supporting you in taking the ball further and further are functions to upgrading strength, bouncing ability, and speed. These functions need you to spend coins on them.

Then, you will come to the question of how to get coins?

Coins gained after every kick depends on how far the ball has gone. And this way is to get most coins in the game easily and quickly. You nearly never spend your coins to the bottom as you have them always, no matter how badly you perform. Moreover, suffering an advertisement also has your newly gained coins doubled.

Coins are only spent as your will so you can save them round after round. Using the coins in strength and speed and bouncing helps the ball to go further and gain more coins provided you aim well.

Besides, there are other ways to get coins.

For example, you can pick up the gift box on the way. Gift boxes with coins get in the way of the ball regularly. However, because you cannot review the map, so you have to remember the distribution when the scene opens up. If you can aim the ball in the middle lane, there are always three boxes on the count.

Finishing missions is also one of the ways. Missions are around 40 raging from easy to challenging. Usually, by kicking to the houses 30 times, you can get 15,000 coins for bonuses while flying the ball to 1,000 gets you less than 1,000 coins! So, completing missions poses a big reward. Easy challenges like hitting grass, desert, or updating your strength, offer fewer coins, but you can always go for it.

Sometimes, getting to the new level appears to be one of the missions.

How to fly the ball?

Flying the ball as far as possible is the technique that the game promotes. To go far, for sure, you have to lead the ball to deserted fields where there is barely anything capable of stopping the bouncing objects. Usually, it is the direction of the middle where the game calls “perfect spot.”

Increasing strength and speed will help.

You can tap on the screen when the objects touch the ground to continue bouncing but not exceed three times. If you are about to do so, increase the bounciness in advance for better effect.

On the way, you can also see many trampolines. When the object falls on one of them, physically, it will jump very far, making use of these accessories. The roof of the car also offers such effect but less.

Hitting trees, walls, or benches may cause the object to fall backward. But hitting them certain times may win a mission.

You can count on practical knowledge about contact between objects to play this game most of the time. The ball reacts to contact sensibly so you can predict movements. The last thing is to always aim by the dial plate and upgrade your skills beforehand.

Offer simple actions, but the graphic appears beyond expectation. The character is made lively. You can even catch him stretching his muscles or jumping up and down while waiting for the kick.

The constant movement of the dial plate and changes in sceneries also praise excitement. You would hardly control the route of the ball as well as the obstacles it may encounter.

Along with it, the movements of the flying object appear so real. It bounces, spins, and stops as we see it in real life. The game also presents physical contact.

Among collections, balls are the most varied. The list consists of ordinary objects in many colors and shapes. However, you can also unlock irregular options.

Further, you will see fruits, cubes, hamburgers, lifesaver, coke, and so many other items that you would expect the least in the kicking game at a higher level. Would you like to try how to feel when kicking them virtually? If yes, then spend your time upping levels.

The next exciting option could be bounciness enhancement. To make the ball go further, we tap on the screen for a bouncing effect, but the problem is we cannot do so more than three times every kick. Therefore, the bouncing enhancement function comes in hand. It helps to extend the distance per time. You can feel that mighty bouncing thank for the illustrative visual effect.

The game is not just for football fans but anyone who enjoys something to kill time. The kicking movement is so easy that children even feel excited about it. Besides, extraordinary objects to kick boost the thrill of playing. Wouldn’t you be curious about how it feels when kicking a hamburger?

Playing the game submits chances to practice aiming, memorizing, and even redirecting. There is no map available, so that you will play it blindly with your memories. It would be confused at first, but soon, you feel triggered.

Everyone can play the game without instructions. The interface happens to be so simple that you know exactly what to do as soon as opening the app. Then the more you play, the better you become.

Being such an easy-peasy game to play, it even remains lively, unexpected, broad, and tempting.

Football Field Kick takes place only 25 MB to download. It is free, low, and smooth that every kind of smartphone can contain.

For the same motif, kicking games are abundant. But, if you love Football Field Kick’s graphics in more vital football’s vibe, we suggest these two games as an alternative.

Perfect Kick reminds us of the old Mario game with 2D characters. However, the background occurs in 3D space that resembles a football court.

The game mimics movements and rules applied for penalty kicks, so it’s sure to be tempting to authentic soccer’s fans.

The graphics are cruder but cute enough to call for your attention.

For devices running on the iOs operation, we recommend Final Kick: Online Football. Graphics here proves to be the best of three. Characters appear with human figures, so does the background.

The scene will give you an exquisite football game with vibrant color and realistic movement. Final Kick: Online Football displays competitiveness among players, encourages teamwork and strategic plan.

The high-quality and sophisticated app can now be purchased free in-store. What are you waiting for?

Football Field Kick Mod APK is a good game for solitude, but also, you can turn it into a competition among family and friends. With a 3D visual effect and smooth in-app operation, the app seems to fit any phone.

More importantly, the content does not get old. There is always fun to explore during the game, as the flow of events is unexpected. There is not yet anyone who reaches the final spot, so the goal remains anonymous to users. Would you be the one who uncovers it?