The world of Indian mythologies will now unveil under your eyes and ready for you to dive into, as you engage yourself in the exciting gameplay of Baahubali. Explore the magical world of Indian epics in Baahubali, one of the greatest cultural works of the old Indian civilizations. And at the same time, fans of the awesome movie series of Baahubali will have their chances to join their favorite movie characters in their ultimate journeys.

Have fun with the exciting gameplay of strategy and discover many interesting features, which will allow you to fully immerse yourself in the awesome world of Baahubali. Explore the interesting gameplay of simulation as you build up your bases and your armies. Construct multiple buildings and prepare your defenses for enemies’ attacks. Attempt to invade other kingdoms as you look for resources to further improve your bases. Conquer and dominate other gamers as you attempt to top over them.

Find out more about this interesting gameplay of Baahubali: The Game with our in-depth reviews.

Here in the game, Android gamers will have their chances to join your favorite mythological characters from the famous epic of Baahubali and other amazing characters from the movie series. All of which will be available in this interesting game from Moonfrog, where you can enjoy your exciting gameplay of strategy and simulation.

Baahubali: The Game offers its similar gameplay to Clash of Clans, which most Android gamers can relate to. Here, you will take control of your ultimate armies of Baahubali, Kattappa, Bhallaladeva, Devasena, and many other great heroes from the movie series. Build your base with many available buildings and constructions. Set up and improve your defenses to protect your armies from invading enemies. Get your armies ready and attempt to conquer other kingdoms to enjoy total dominations in the game.

Play with friends and online gamers whenever you want and find yourself discovering many interesting in-game mechanics from Baahubali: The Game. Come up with many interesting strategy and army setups to further enjoy the exciting gameplay of history. Bring glories to Mahishmati with your strong armies and incredible bases.

Create your undefeatable fort to defend the empire

For those of you who’re interested, you’ll now find yourself enjoying the addictive gameplay of base defend in Baahubali: The Game, especially if you’re fascinated about Indian history. Feel free to engage yourself in the awesome gameplay of strategy as you construct your undefeatable bases with brilliant defense setups and powerful structures to protect your goods.

Start by introducing the powerful archer towers and spear walls which can be constructed to defend your base. Set them up in different formations and orders, as you come up with amazing ways to protect your important resources. Make uses of the incredible ambushes, each having their own unique effects and debuffs on the enemies, to halt their advancements. Play with spike traps, snake traps, and more. Take down your enemies with superior weapons and gain the ultimate advantages in your battle against the enemies. 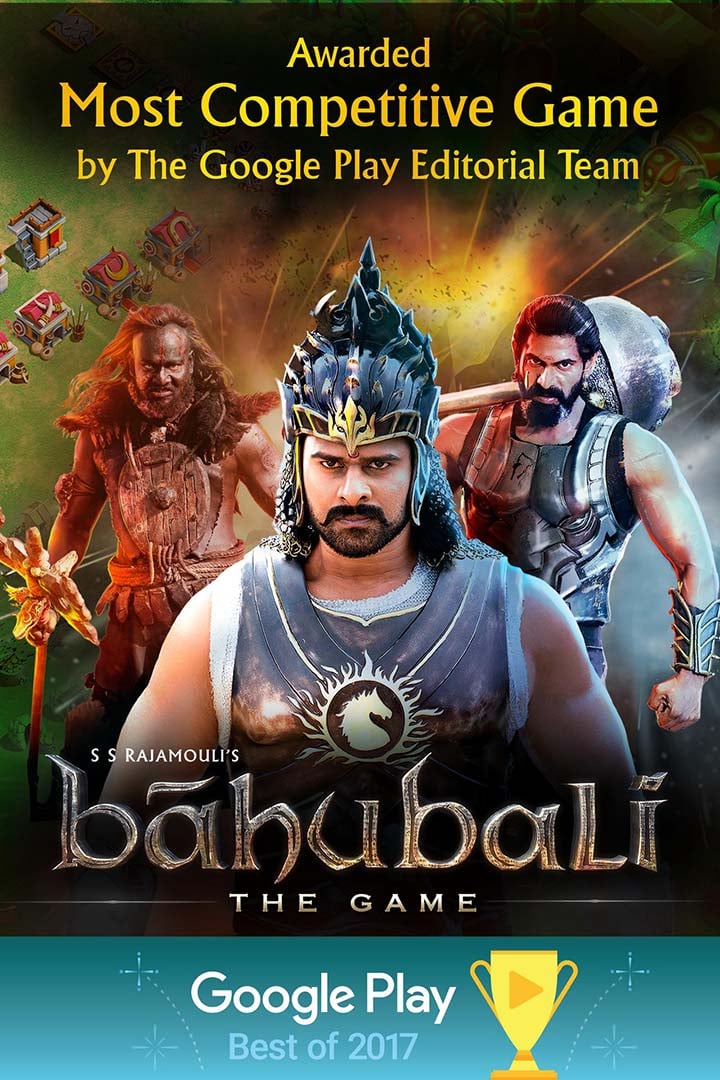 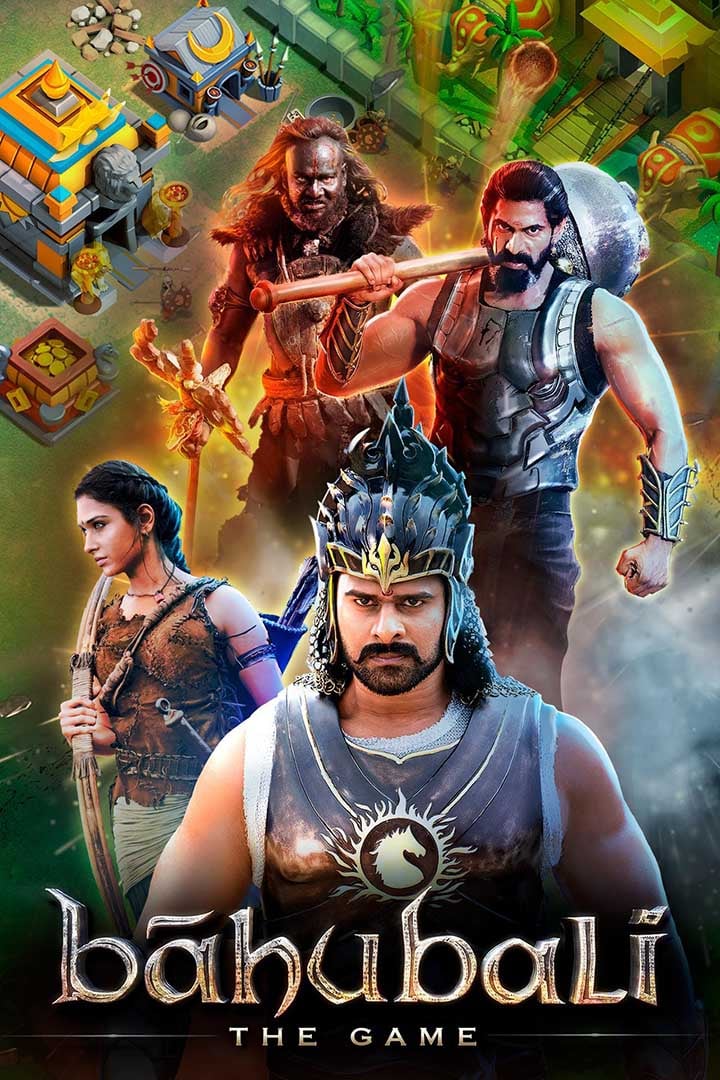 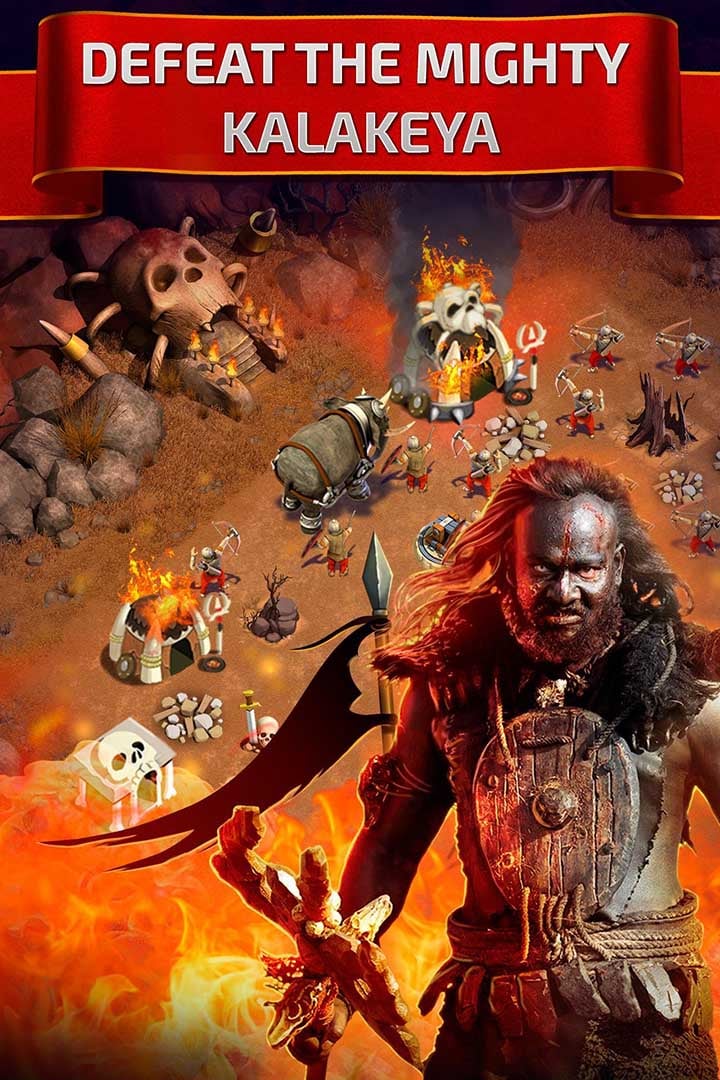 Get the troops ready for an invasion

And at the same time, also find yourself readying your awesome armies to prepare for your upcoming invasions. Feel free to discover the online world where you can find other people’s bases. Look for those that are exploitable and plan out your different moves so you can attempt to defeat the opponents. Crush their defenses with your powerful troops to collect bountiful loots from their storages.

Research and recruit your troops to power up your armies. Get the armory upgraded and readied so you can further improve the units. Smash through your enemies defenses with your powerful military advancements and execute proper tactics to easily plunder into their resources.

A variety of different units and towers with unique abilities

To further improve the exciting gameplay of Baahubali: The Game, Android gamers will find themselves making uses of the different in-game units and towers, each having their own unique traits and abilities. Here, you can freely combine different towers and unit setups to improve your defenses and armies.

Make uses of their unique powers to counter that of your enemies, so you can successfully defend your base. Or you can also unlock powerful troops with proper tactics to effectively penetrate through the enemies’ defenses. Feel free to explore 10+ different troops and multiple towers as you attempt to enjoy the game even more.

Defeat your opponents and get their loots with your powerful infantries, war elephants, or unlock the powerful catapults. 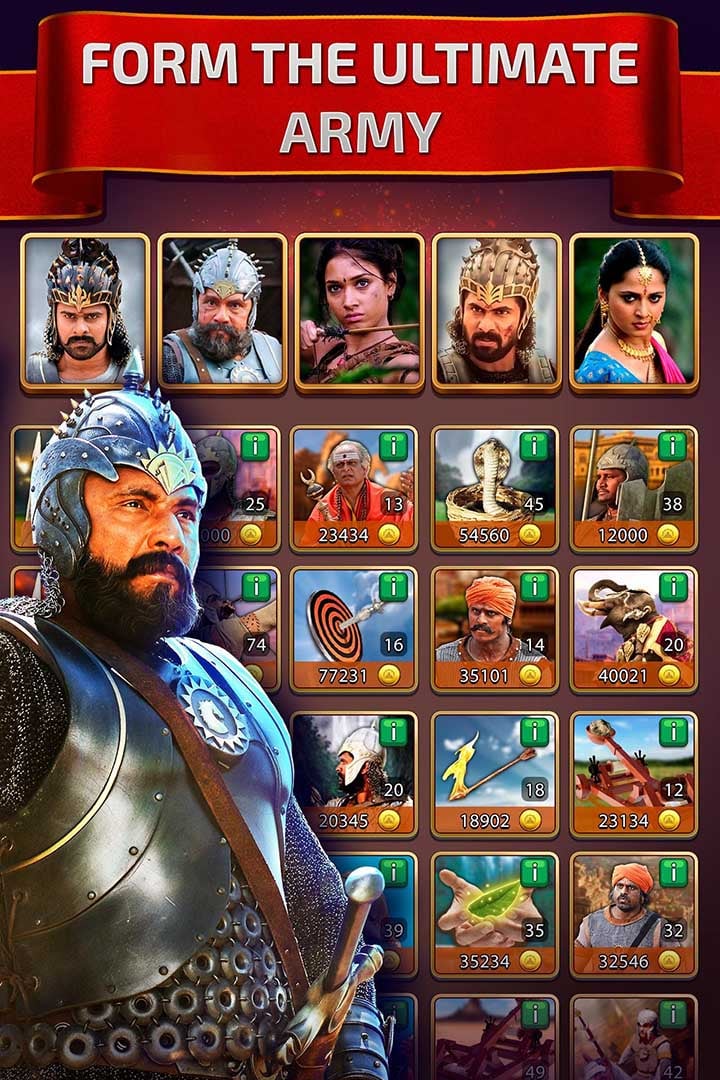 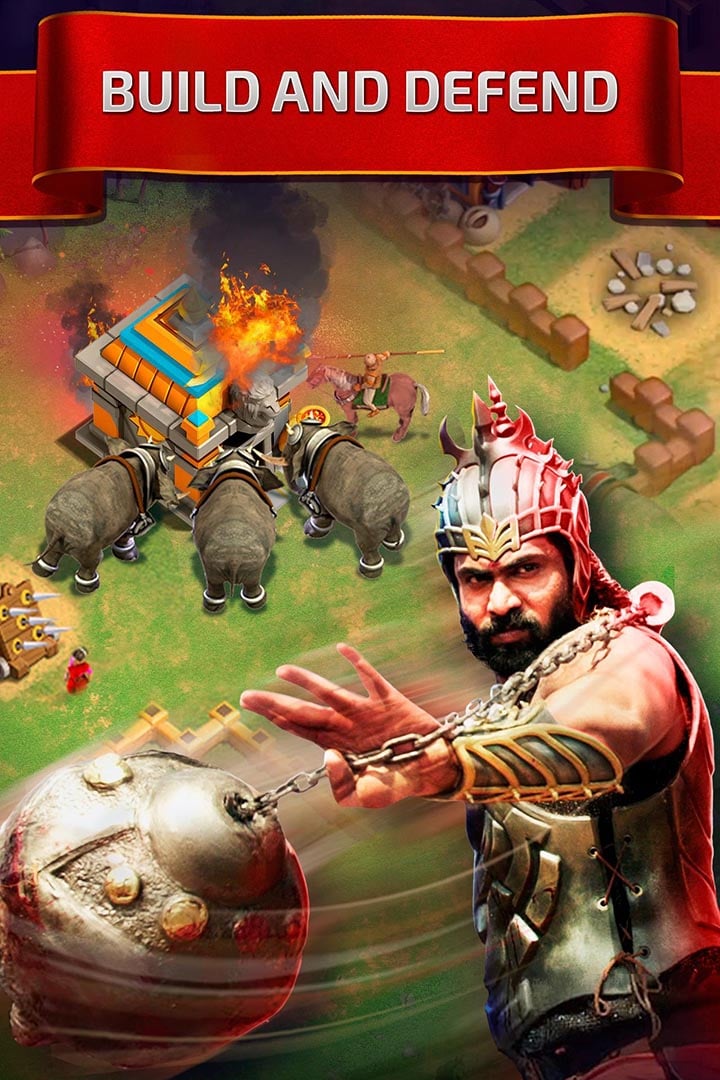 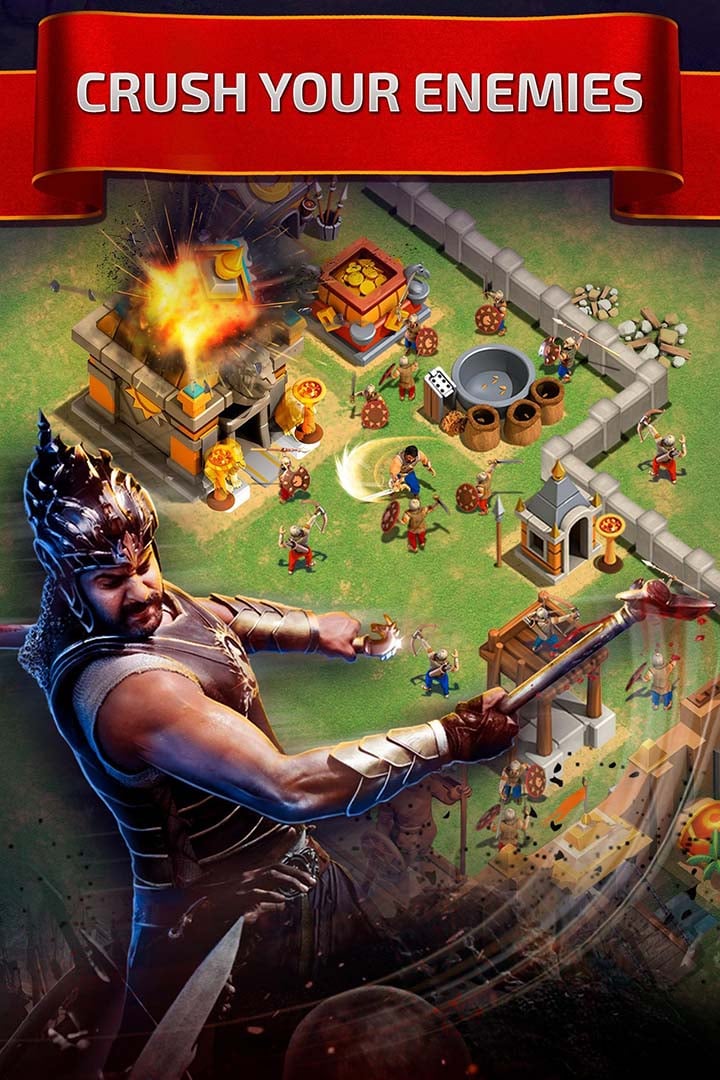 Amazing heroes to have in your armies

Now, along with the powerful troops, Android gamers in Baahubali: The Game can also summon their powerful heroes with incredible abilities, who can lead your armies to the ultimate victory and glories. Have fun playing with Baahubali, Kattappa, Bhallaladeva, and many other heroes, as they execute their unique powers against the enemies. Put your Lion Punches, Summon Guards, Chain Mace, along with other weapons and abilities to good uses. Enjoy the exciting gameplay of mobile strategy and simulation to the fullest.

Powerful boosters and power-ups to make uses of

For those of you who’re interested, you can now enjoy the powerful boosters and power-ups, which are available for you to make uses of at any period of the game. Feel free to enable your power-ups at the right time to effectively turn the courses of the battle. Make uses of the available Spells and Rally tools, as you temporarily power up the troops. Also enable the priest’s healing abilities to give the blessing from Gods to your armies. All of which will give you better chances of winning the game, if the powers are used correctly.

Take on a series of exciting Solo Missions

Also, to make the game more interesting, Baahubali: The Game also offers its exciting Solo Missions, which consist of a series of exciting single player gameplay for you to enjoy. Have fun as you engage yourself in the awesome story-oriented missions by taking your ultimate journeys to defeat the cruel Kalkeyas and his deadly armies. Take on the exciting missions and enjoy the interesting gameplay of Baahubali: The Game with many amazing features

Have fun with friends and online gamers

For those of you who’re interested, you can now have absolute fun with the addictive gameplay of online strategy and simulation. Not just engaging yourself in the exciting battles, the game also offers many interesting interactions, which you can pick up and enjoy with your friends and other online gamers. All of which should make the game a lot more fun and enjoyable.

To make the game more interesting, Android gamers in Baahubali: The Game will have their chances to dive into the exciting in-game action with the available Clan mode. Feel free to join an existing clan or create your own clan and start to enjoy the exciting gameplay of Baahubali: The Game in this mode. Discover many interesting features from this mode and have fun with the addictive clan wars whenever you want.

And despite all the exciting in-game features, Android gamers in Baahubali: The Game can now enjoy the free version of the game on the Google Play Store. Here, you can freely install the exciting mobile game on any of your mobile devices, no payment is required.

For those of you who’re interested, you can now engage yourself in the unlocked gameplay of Baahubali: The Game, which offer many interesting features and experiences. Here, there won’t be any ads or in-game purchases to bother you. And all you need is to download the Baahubali Mod APK on our website, follow the provided instructions to successfully install the game, and you can start to have fun with it.

With interesting in-game graphics, Android gamers in Baahubali: The Game will now find themselves enjoying the exciting pieces of actions to the fullest. Have fun with amazingly designed characters, explore the addictive in-game actions with immersive visual effects, and more. All of which should allow you to enjoy the game to the fullest.

And combined with the interesting audio experiences in Baahubali: The Game, Android gamers will certainly find themselves hooked to the exciting. Have fun with powerful in-game audio as you attempt to smash your enemies’ bases. Or have fun with the engaging and on-themed soundtracks throughout your different gameplay.

For those of you who’re interested in the classic base defense and loot battle against your online enemies, Baahubali: The Game is undoubtedly a great mobile game to enjoy. With in-depth gameplay of strategy and exciting in-game features, Android gamers should find themselves enjoying the exciting in-game experiences to the fullest.