Blast your way through enemies and challenges ahead of you in a 3D action game with powerful weapons! Bazooka Boy never lets you down from the first stages. Your job is to collect new guns and master their individual qualities. Sounds fun, doesn’t it? Give it a go and start wiping out the bad guys blocking the way to win! The game fits all Android devices, and with its addictive levels upon levels, you won’t ever get bored.

Getting published by Supersonic Studios Ltd, Bazooka Boy is also available for direct downloads from Google Play Store. Throughout the game, you have to pass different levels of brilliant content and barriers. These are where you encounter flying foes and fun-looking boys.

Don’t panic! Let’s blow up the bases and destroy their buildings. More interestingly, the game offers you a chance to be anything you want – Well, I mean different characters. You’ll love that feature, which enables you to even change from an assassin into a Batman. Or how about becoming a vampire for a bloody Halloween holiday. Trust me, it’s rare to find a unique game just like Bazooka Boy.

It’s worth referring that Bazooka Boy has more than +̀500,000 installs on Google Play Store. This situation only demonstrates that thousands of users in various parts of the world choose to play the game. Go to download the game to your Andriod device, you surely love Bazooka Boy for most parts. Besides, note that the game is rated 12+ plus moderate violence in the game.

The players have gotten into 400 levels, which is satisfying enough for all adventure lovers. However, you must pay to get rid of the ads. It generally costs $3 to remove all of them. The remaining issue here is that you still keep watching ads.

After proceeding to the next level, the players earn more cash, but it becomes useless after that. In other words, there’s no money unless you watch the ads. What if the players want to unlock more special skins? Shall they use cash to make that happen? Nope, you need to view ads to unlock them all. No doubt, Bazooka Boy is a solid and fun game everyone would love to try it once.

One thing that makes this game much better than other classic shooting genres is the possibility of upgrading the weapons or adding your favorite armors. After purchasing these, your money sometimes piles up. Like Drawmaster, a bow and arrow shooting game that demands the gamers to aim the target and hit the bull’s eye each level, Bazooka Boy needs you to shoot your way to the final victory.

What an entertaining game to pass the time, we recommend you to turn on the airplane mode so that you can play it without an ad. But a few people hate the fact that they’re sometimes stuck on a level since their character automatically dies once the level begins and they can’t do anything about it at all. So it’s kind of buggy, which has gotten them through some dull moments.

Not only that, but you also see no particular bonus or certain advantage to finishing a level with a bomb and three bombs. In this situation, it would be great to have a higher score type thing here. It’s true the recent update fixed a few irritating bugs, but now the bunker bomb becomes invisible. Honestly, Bazooka Boy is a good game, but it still owns some issues it needs to repair.

Besides, the in-game levels tend to repeat once you surpass 100, and some players have already past 800. Other than this, the game remains an endless amount of fun. Also, it offers gamers a great variety of weapon choices to make. You usually have ad-free challenges when reaching level 437.

Sadly, one or two players admit that at this level, though they shoot the red guy with all kinds of guns, it’s impossible to go through the level. They even emailed to ask for help but with no reply. The gamers end up waiting and starting over the game at the same time.

The most amazing thing about the game is a bunch of weapons you can use to eliminate the foes in the game. There are grenade, shotgun, Bazooka, Cluster, Burst,  and many more types of weapons available. Each gun features brilliant qualities that are waiting for you to explore.

Come to download Bazooka Boy to work your way through several levels and experience this 3D shooting battle.

As you stand at level 70, you can own different guns, but once the game begins repeating itself, then you will see ads after passing level 100. At this moment, the players can only purchase guns and after you’ve got all of them, you won’t have anything else to purchase. Therefore, the shooters have to build up money for further upgrades.

After collecting the equipment you want, utilize it to make your opponents fly while you’re eliminating their bases and houses. What’s interesting is that the shooter has endless possibilities and destruction to reach the victory. Many levels are available for you to complete, so take the time to experience them all.

Sure enough, Bazooka Boy is a worth-to-try challenge game, and you would love to try every corner the game offers. It doesn’t just consist of outstanding physics but also the realistic explosion effects that make every level the most unique among other games of the same genre.

In sum, Bazooka Boy delivers a good way to “kill” at times, especially when you get to come across the little figures that look funny. Everything looks great except when you stop at level 437, the game glitches and won’t let you move forwards. The game educates you to get the right weapon for each mission. Despite some repeats, it’s still fun. 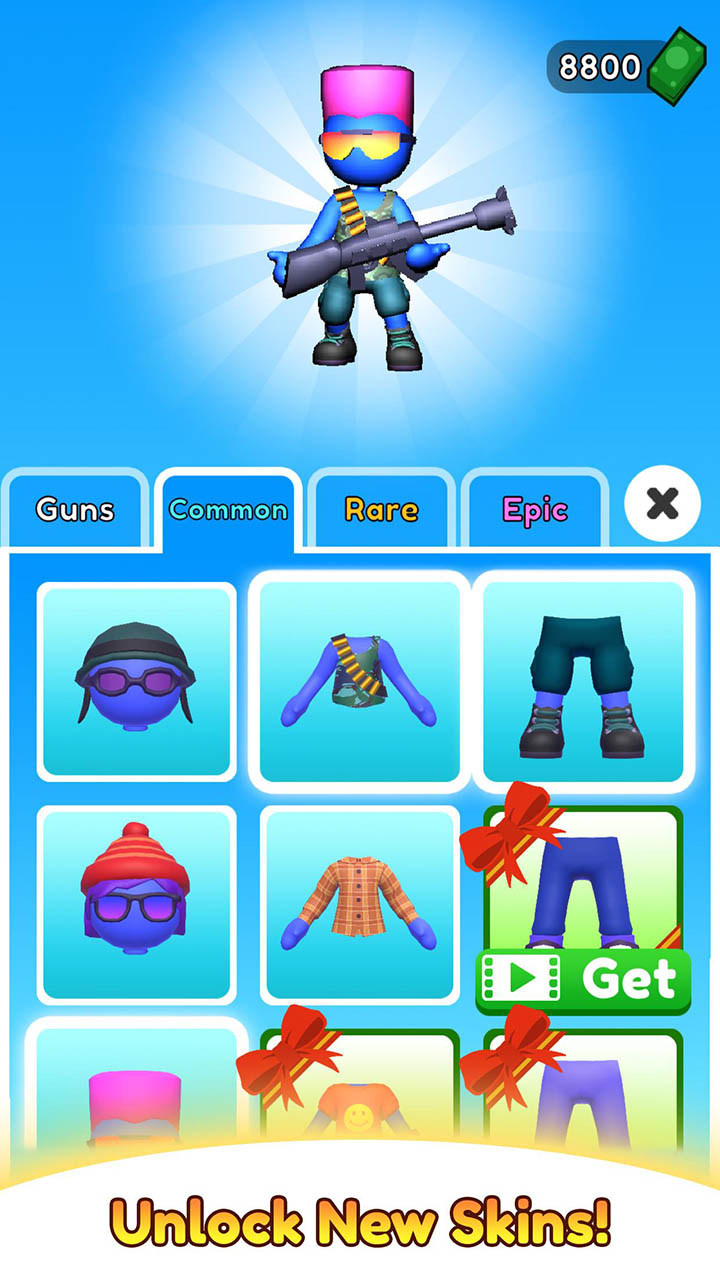 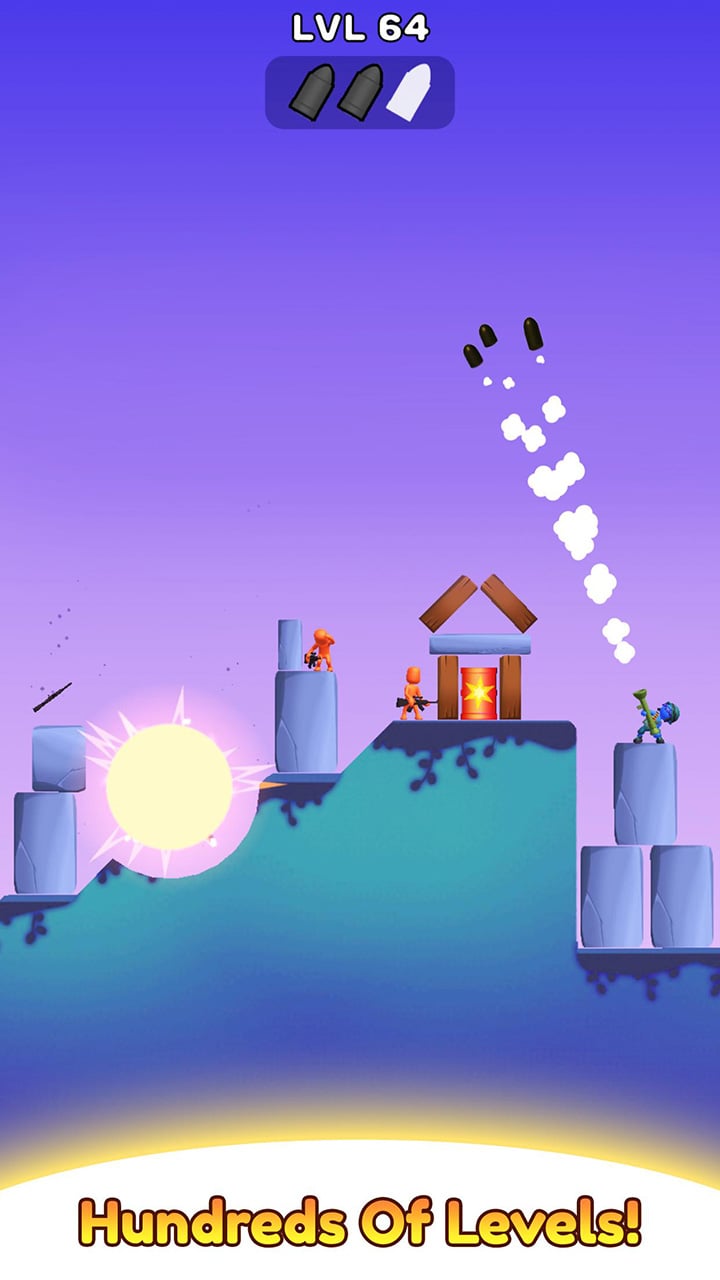 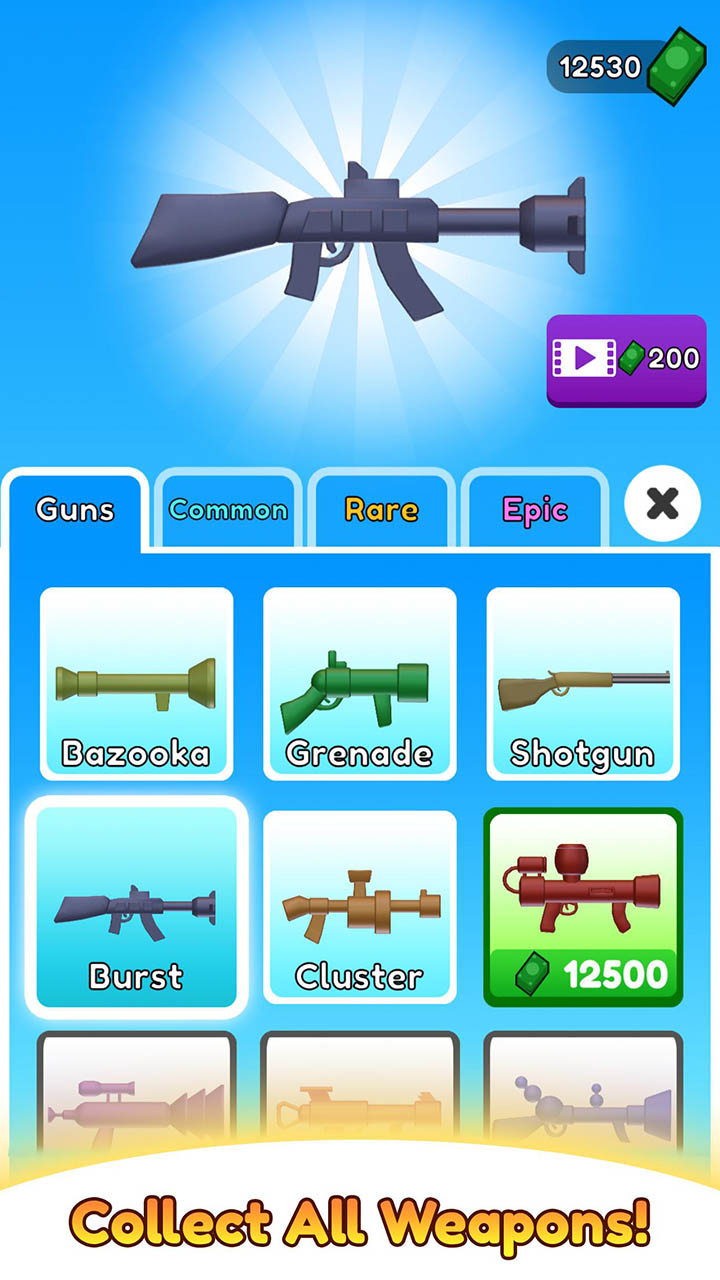 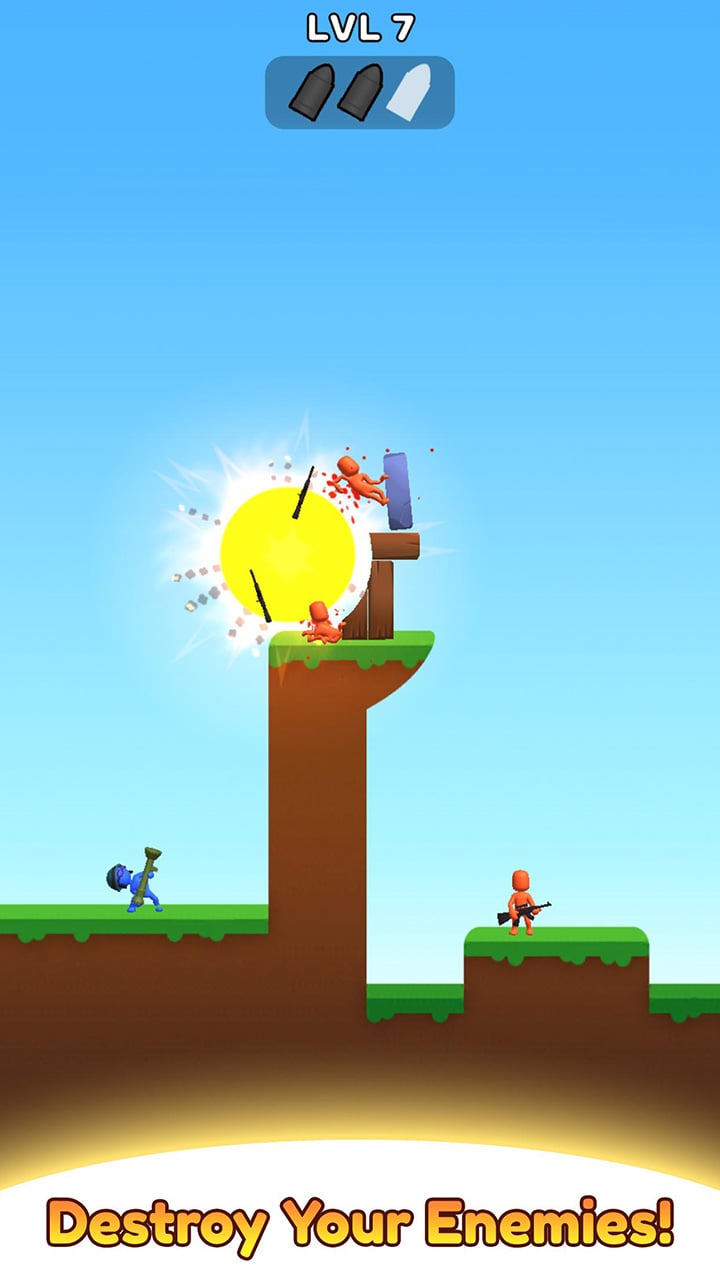 The Android game brings good-looking graphics to every player from the beginning. Not to mention the flashy explosion effects, Bazooka Boy owns the amazing physics making each level more special than ever.

This strategy game is more of a time passer! It looks simple enough for anybody but don’t underestimate it. Based on which weapon you choose to use, it helps your strategy a lot. Foes will die from the explosion and collapse of different buildings. Only successful actions on the battlefield enable you to get new grenade launchers, clothes,  and accessories.

Playing it gives you stress relief and lets you pass the time comfortably. It will be better if more features and challenges are added to the game. To make it nicer, a Pro version of the game should be made where you pay $6 to use the family sharing feature.

Bazooka Boy is a badass explosive action game you can play on your smartphone. Not only having puzzle elements, but the game itself also allows the main characters to kill enemies with the bazooka and many other weapons.

For hundreds of levels, you must destroy all of the red guys by shooting them up and destroying their bases. New bug fixes, improvements, and even spooky skins are available all in the new version. Waste no time but give it a go now!