The Cookie Jam presents a combination of three sugary entertainment: Crush saga, cake preparing, and also a puzzle. Getting into the game, you may mistake it as a version of Crush Saga because of how sweets are distributed. However, it offers more than just sliding and scoring.

Now, you can easily install in on any devices by downloading Cookie Jam free. Once opening it, you are already trapped in the continuity of the game. You would find it familiar enough to start away but also exciting enough to go on. Features are changed to relate more to reality while preserving the fanciness of a desert game.

The graphics in Cookie Jam pop brighter but not so glowing. It would help to ease your vision when you stick your eyes into it for too long. However, the funky movements of sweets and visual effects are kept almost identical to Crush Saga. Something’s remained, but many features are elevated for players to attain the sweetest feast of all.

Once having Cookie Jam, you can enjoy it in many ways. The game is built to enjoy solitude, more to kill time. However, you can appeal to your friend to join the combat. The actions in the game would never stop surprising you. First, you might swap and crash like in the average Crush saga, finishing simple orders like in Cake Factory. But soon, you are introduced to new tools, a new strategy, and for sure, a new fun time. It is like a never-ending feast.

Cookies Jam provides simple graphics. Its original collections of sweets are not as varied as Crush Saga. However, it’s the feature that attracts many people. Your eyes will not be worn out because of overwhelming colors or matrix construction. The game outline seems chilling, considering it’s the combination of 3 games.

They built this game easily so everyone can play without reading long paged instructions. Even children would know what to do as every opening of the game comes with an illustration move. The explanation is available at the beginning of the game whenever you’ve got something new.

The requirements and collections will change from level to level. The hardship also increases so that people always catch thrills. The game provides unlimited challenges and additional features every time you reach the next level. The requirements are never the same.

The game offers a connection to Facebook to socialize with friends, organize competition from a distance, or have chats during the game.

Cookies Jam displays the best out of three popular games, so it’s worth your longing. They trimmed the unnecessariness of the three to make rules and moves compatible together.

The latest version of Cookie Jam offers swaps and crashes and a sensible story. Chef Panda is given tasks at the beginning of the game, along with his warning and instructions, if necessary. The flow of the story gets through levels; hence, players will feel doing a real job.

The latest version of the app also extends the circle of the game to socialize. Making friends would be more comfortable with Cookie Jam as long as you connect to social media while playing. The app proves itself a multitasking option, which you can customize as the way you want.

There is no reason not to try it. The next thing should be how to play it to the fullest, not if to install it.

So, we hope you are already with the Cookie Jam installed and ready to figure out how it works. Not long after this line will you explore rules and specialties about the game. Along with it, we present a thorough understanding of how to nail it!

Are you ready to swap? 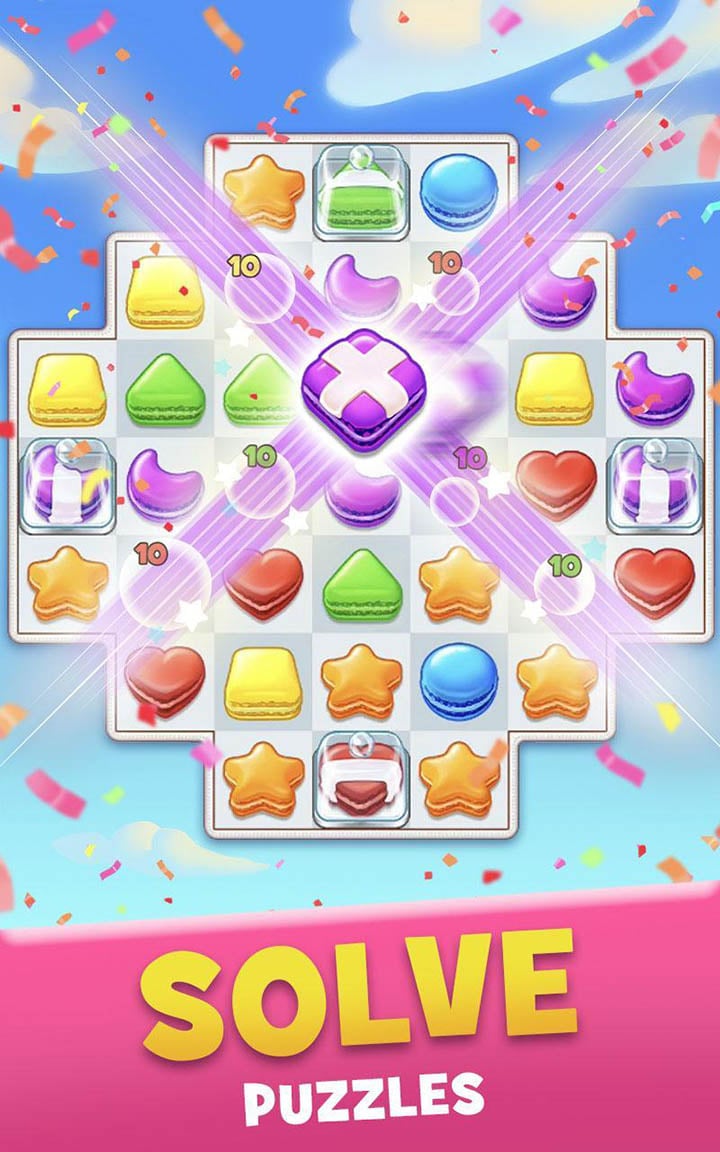 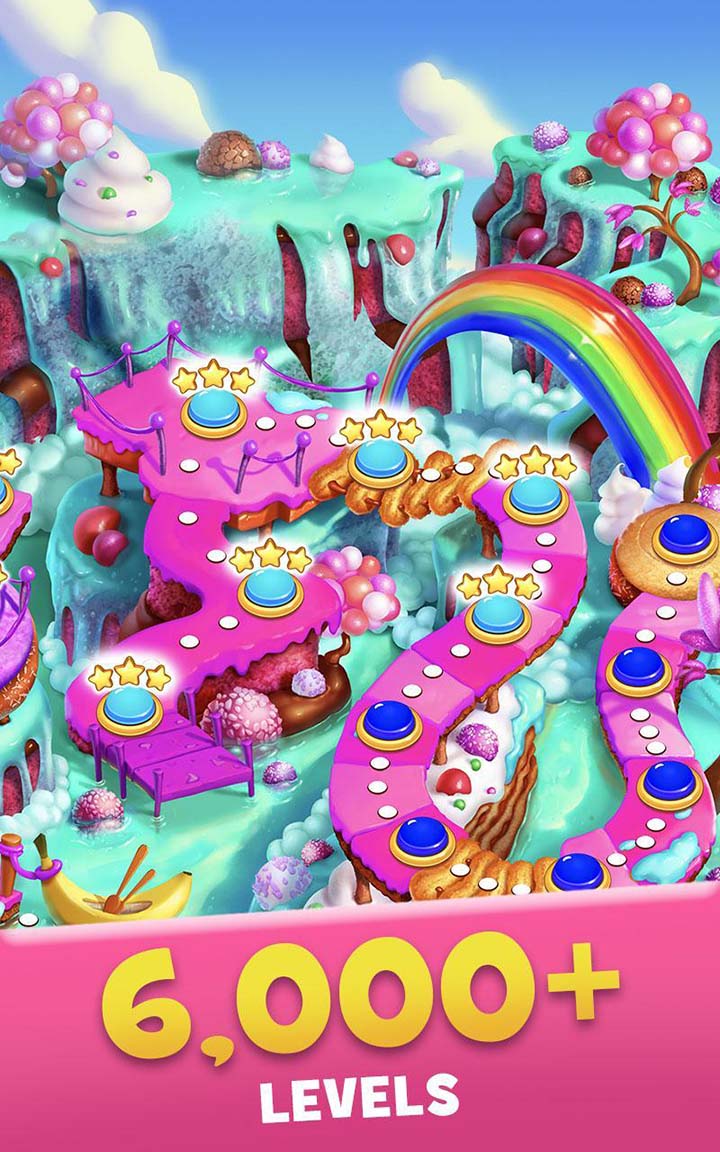 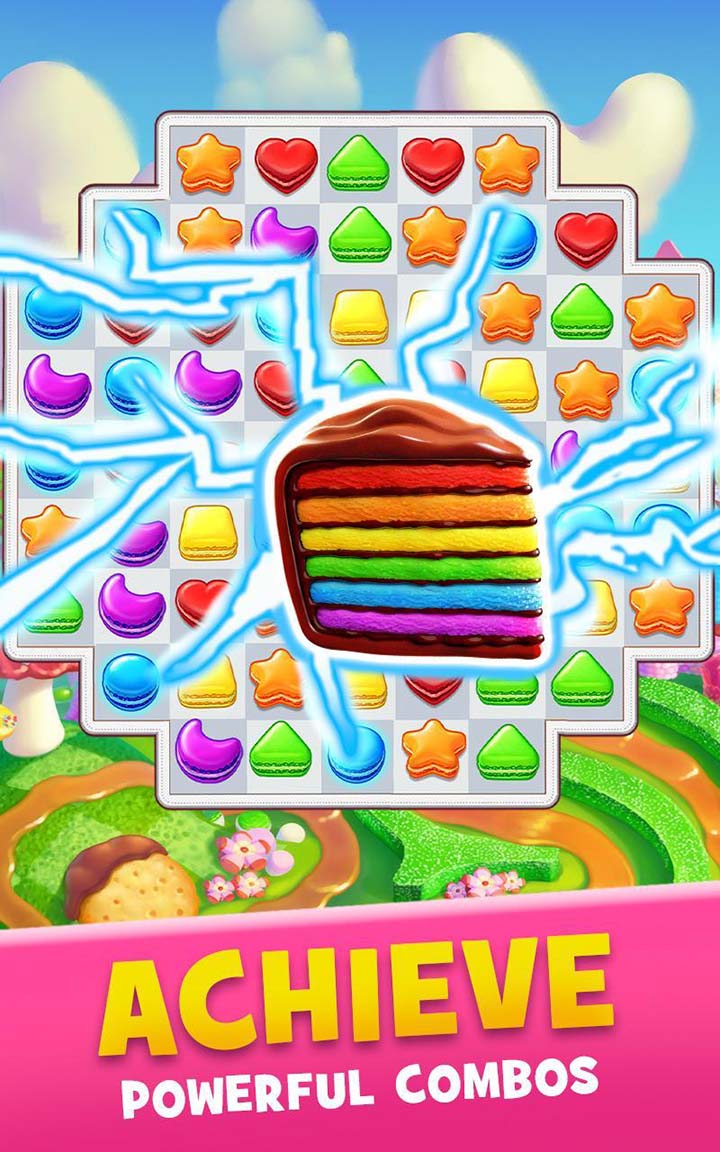 From the first level, you will hear from Chef Panda. He will tell you what to collect and how many. The saying pops up in the middle of the display, and then the order will be noted on a corner so that you can easily keep track of how much you have done.

On display, the game shows you your points, privileges you earned, and steps allowed to take. Points are counted continuously and won’t be reset after finishing a level. Privileges that are not used yet can be saved for the next round but not steps. That means, generally, you have 30 moves to use and finish it, you must finish the order; otherwise, you fail. If you have any left, the system will play random moves that always get you points.

Only by finishing the last level can you come to the next. You can replay the failed level, but after three times of rewinding, you must pay for replaying or wait until the system allows you to.

Happenings of each level

Level 1 and level 2 are superficial. The combos are only from 3 and 4, so not yet any unique sweets present. However, it is to warm up.

After level three, you start to find more 4 and 5 lines of similar items that can produce treats such as stripped sweets or rainbow cakes. As Chef Panda instructs, you will know how these items of privileges function.

The lovely city map will come on the show at the end after you finish the round, succeeded or not. The system, based on your performance, will rate from 1 to 3 stars.

Starting from level 4, you will see the game more challenging, and sometimes, 30 steps are not enough. You will have to take advantage of new tools, buy more life, and purchase some selective functions by gaining coins. 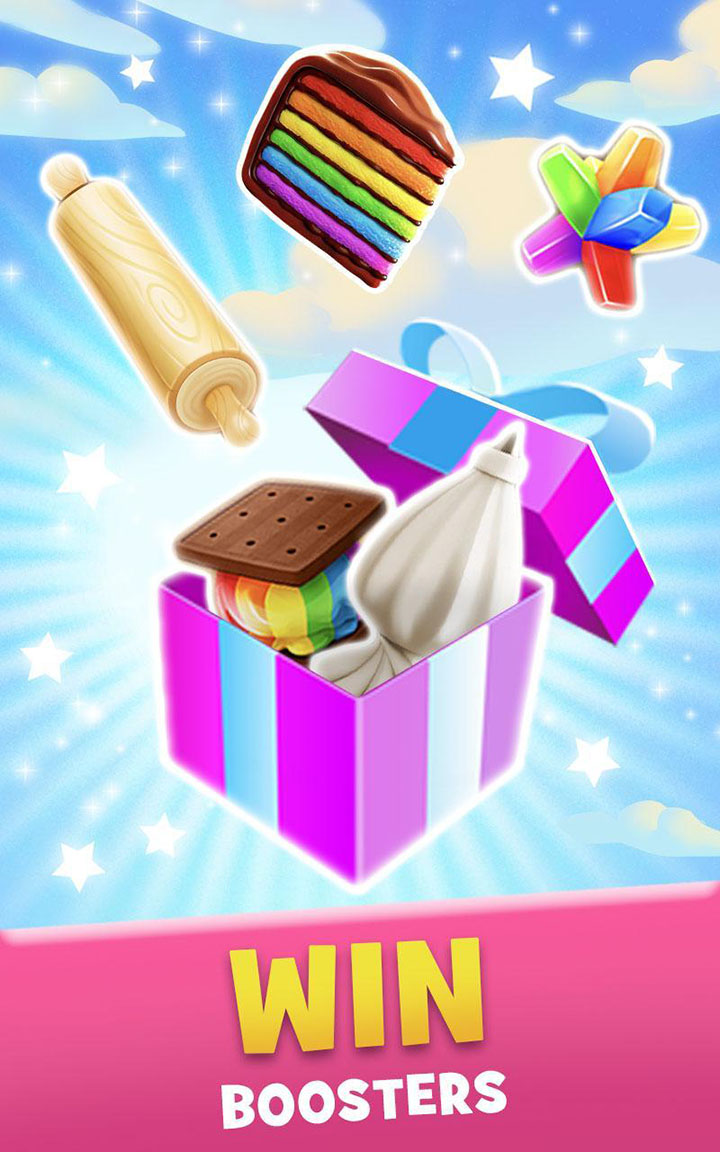 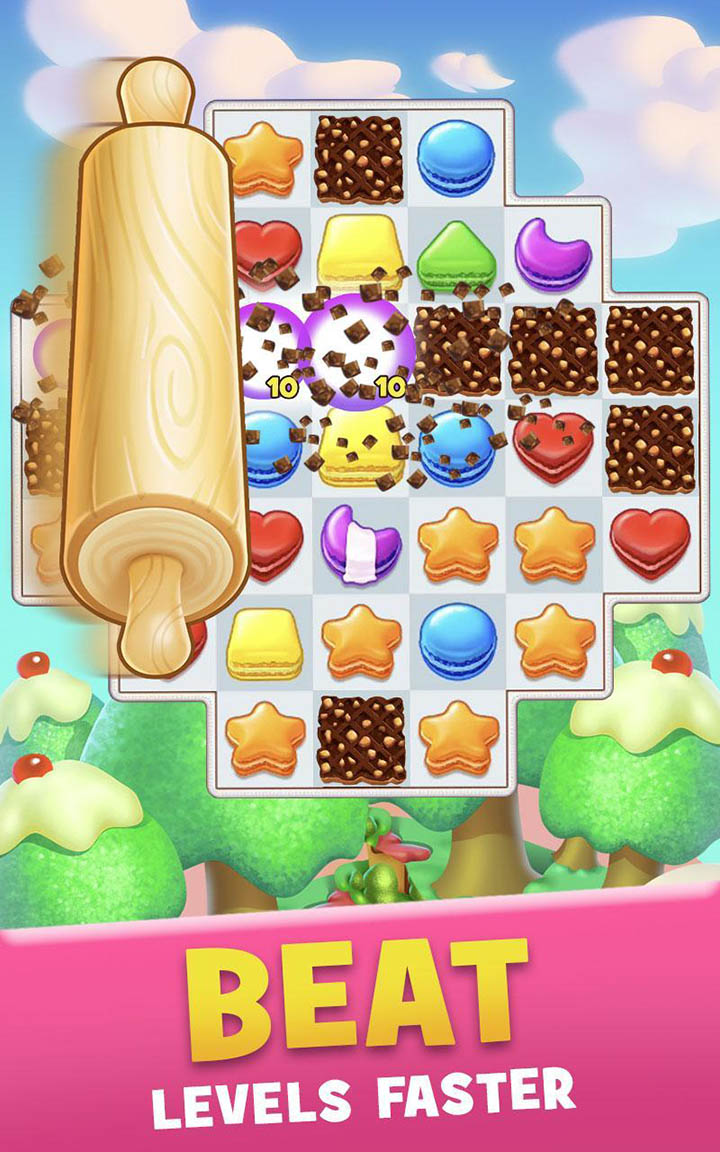 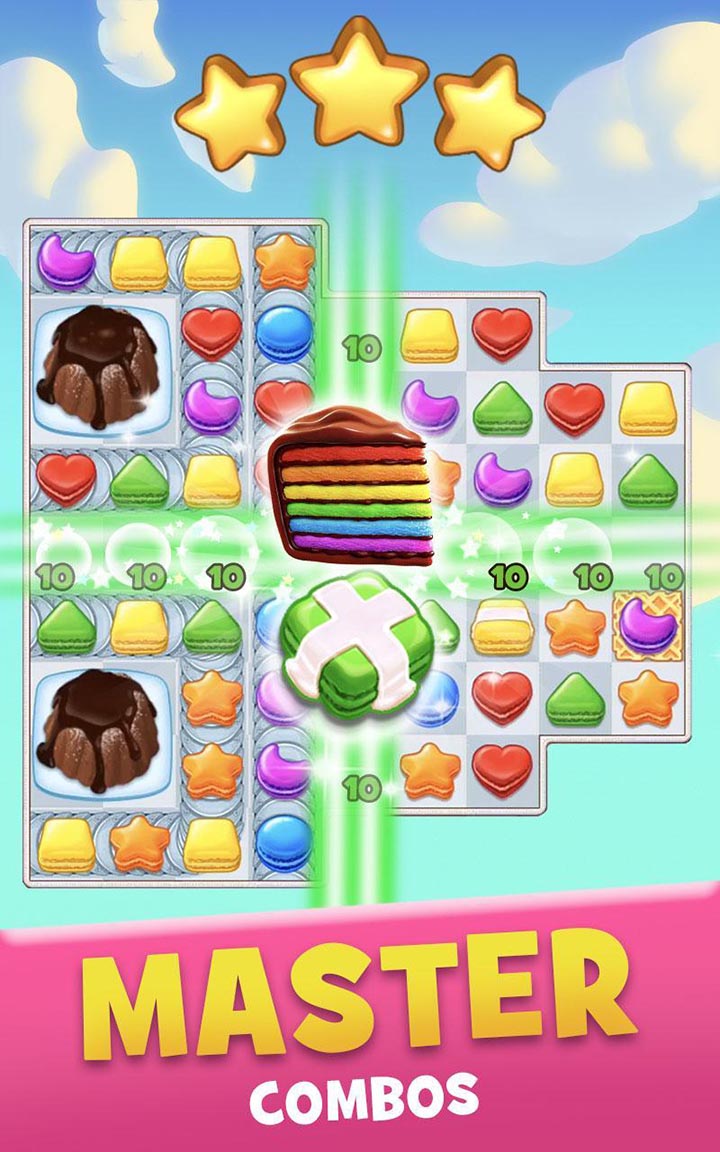 Privileged items and their uses

Usual waffles show up starting from level 5. Waffles lay under a jelly, and when the sweets on them become collected, the waffle also breaks into pieces. At levels with waffles, breaking all of them is the order, so do not waste your moves on jellies out of the waffle zone.

Brown waffles are more challenging to break than ordinary ones. You have to pop the jelly twice to break them. Same with the previous, breaking all waffles remains the goal, so always focus on them.

In the beginning, the collection includes only four jellies in 4 colors distributed randomly. Players have to collect three similar pieces that will disappear from the collection after being a match and come to fill the order.

Sometimes, you can create striped jellies from a gathering of 4. The strip represents if the combine is made out of line or column. Next time, when you gather three within that stripped cake, not only three pieces but the whole row or column will be collected.

A sandwich is made of 2 sweets by accidentally gathering 2 kinds of combos at a time. The sandwich has its identity interchangeable between two kinds.

When you gain the combo five pieces, the system gives you a rainbow cake. It is harder to get but worth trying. When you swap it with any piece nearby, it and all of its kind will be collected to the order. That is also true of striped jelly and sandwiches.

Interestingly, when two rainbow cakes get swapped, everything in the matrix will be collected, then a new one appears (If you have not yet finished the order).

With the coming of waffles and so on, 30 given steps are no longer enough to tackle the problem. Then come more help.

Spoons to break cookies. A spoon can be used to break a specific yellow waffle but only one every time. The game gives you three times at first, and you can save them for the next round. The tip is to use them when you know for sure left moves are not enough.

The rolling pins appeared in rounds after spoons had shown up. Once rolling, you can break the whole line of waffles. To crush the column of waffles, pastry bags come to help. But, this item only turns up after rolling pins.

Oven mitts are ones that can tackle brown waffles by just a move.

By spending the coin, you can buy a rainbow and striped cake for the upcoming round. You can also buy five moves but only in advance of the game. Make a wise choice because those moves will not be saved. However, they are not in unlimited numbers. After buying 3 of each, you have to pass some levels or pay to get the offer.

The more you play, the more items and challenges will get in your way. But at the same time, it helps come along.

What makes Cookie Jam reachable to a wide range of users is its explicit instruction. In some games, rules are said in the beginning, and players have to remember. That’s hard for children.

However, Cookie Jam puts the instructions in the saying of Chef Panda, with demo moves at the beginning of the game. Hence, players feel engaged in the game, less stressed to remember steps.

Order and allowed moves pop up on the corner of the screen so that people can keep on track. Tools also appear around where users can put their hands on at any time of the game.

Every time starting the new game, the system will notify you of your scores, remind you of purchasing necessary items and introduce additional functions if necessary.

We believe no one could have any problem understanding this game.

Register for an account of Cookie Jam. You can keep the performance record and come back to continue at any time. By doing so, you also have a chance to connect your achievements to Facebook, show it to your friends, and together enjoy the game in cyberspace.

During the game, you can chat with friends, keep a record of competition, and provoke the sweet war at any time.

By this function, the game presents a reasonable time of entertaining but not cut you off from the world unless you choose to.

Usually, games will convey more or less a vibe of gender. You can say this game is for boys, and some others seem to fit better with girls. But Cookie Jam does not promote that idea. Colors, images, and context of the game appear unisex.

It shouldn’t be any games that girls can play but boys. And, Cookie Jam succeeds in building that image. That’s also how the game attracts many downloads.

Charm King also follows the same motif but here, you connect charms, not sweet. The game tells a story that might interest fairytale lovers. What’s interesting about Charm King is its daily events. The system designs different challenges for the price every day, so it makes the story even better. Also, the account setting can keep records of more than a player.

The better about this game, in comparison to Cookie Jam, is graphics. They put more effort into creating characters and the story in Charm King. Colors are much more vibrant.

Toy Blast, on the other hand, proposes a more straightforward construction. The interface reminds of an old-time puzzle game. However, Toy Bast does bring a colossal blast. Construction for the map and the flow of the story seems sophisticated. The idea is as thoughtful as the others by giving thrilling challenges from time to time.

Games such as Cookie Jam Mod APK never seem out of date. It always imposes a particular temptation to bring you back to the game. Moreover, the latest Cookie Jam has been a combination of influential 3 games in people’s hearts. You can now enjoy the trickiness of puzzle, sweet images of Candy Factory, and surprising Crush Saga, all in one.

The graphics seem already ripe for everyone, not alone easy-going content. There is no reason to turn down this invitation. Moreover, the game is available for any device. Why don’t you pick up your phone and get it installed?