Crash Fever is a Japanese-made RPG game that is combined with lots of new factors, making many people enjoy it. It is an online game published by the Land of the Rising Sun. As you may know, this is a socially collaborating game, so players will meet in this game, in a virtual way, to finish a mission. Besides, it will provide you with many exciting events and rewards for players. So, it kind of creates valuable choices for each player.

On the other hand, it is not difficult to play the game. Put it simply; you just need to destroy groups of puzzles or balls of close distances and a similar color to get points or bits. However, to push the excitement of this game, the publisher makes it more complicated with the game rules or the role you play. After exploring a little bit about the game, it is high time for you to start playing Crash Fever. This game application is now available on iOS and Android devices.

The game core of Crash Fever is not only a puzzle game but also a hero collecting game. It seems to be similar to Puzzle & Dragons, but you will collect some anime-like characters in lieu of dragons. To play this game, you will create a party consisting of four units. Then, you take these units on quests. Every quest will have separate stages, but all of them require the same playing method. Usually, you have to fight against the enemy until you meet the boss. After beating the boss, you win and go to the following stage. But how can you control your units to attack?

Simply, you just need to burst an orb on the field. If you can explode the orbs matching the color of your character, you earn bonus damage. And you should remember the mechanics of rock-paper-scissors. In this game, the fire will beat grass; grass will beat electricity, electricity will beat the water, and water surely will beat fire. If you follow this rule, everything in the game becomes a breeze.

Keep in mind that your units will not level up through completing quests. You have to provide them with material units and bits to level up. How can you get these materials? Do not worry; you will be rewarded, after each stage, with materials, units, and bits that are used to promote your rank and your units.

Apart from the regular quests, you also can get some limited time ranks and units through the event quests. However, to do these event quests, you have to be at level 30 upwards. Additionally, you have to earn Polygons through a thousand missions. Polygons are a sort of currency you can purchase with real money. It may sound costly, but you will use Polygons to buy lots of powerful units.

Eventually, the feature that makes this game outstanding is that you can choose to complete stages with other players. Honestly, you are able to create a room, then people will join in, and each surely will control a different character. This seems to be the selling point of this game.

Overall, this game is combined perfectly between puzzles and role-playing adventure factors. The gameplay of Crash Fever is simple, but it requires players to prepare an appropriate strategy based on the game process. Besides, the gameplay is also unique when bringing a brand-new experience to players and containing many factors from other games. Furthermore, all the characters in the gameplay a crucial role to players as well. They have funny and lovely styles with colorful and eye-catching costumes.

A Puzzle Game Having Characters

All of the characters have unique characteristics that are determined by personality, strength, and appearance. Based on the playstyle of the player, these characters build a squad with powerful skills for combat. Furthermore, players can upgrade and empower all characters. More specifically, upgrading characters helps to improve their overall stats, and they can fight stronger enemies then. While empowering helps to reduce the activating conditions and enhance some special skills during combat.

Totally, there are 11 units available in the Grad Party hatcher, including Marie Curie, Swan, Pascal, Stokes, Napier, Fleming, Crookes, D’Alembert, Galileo & Galilei, Pavlov, and Foucault. Here is some detailed information about each unit.

Besides the catchy character graphics, this game creates continuously simple mini-games and exciting events for players. This feature makes the gameplay more diverse than other puzzle games. Taking part in events, you have opportunities to get rare items while participating in mini games, you will have peaceful times to relax. 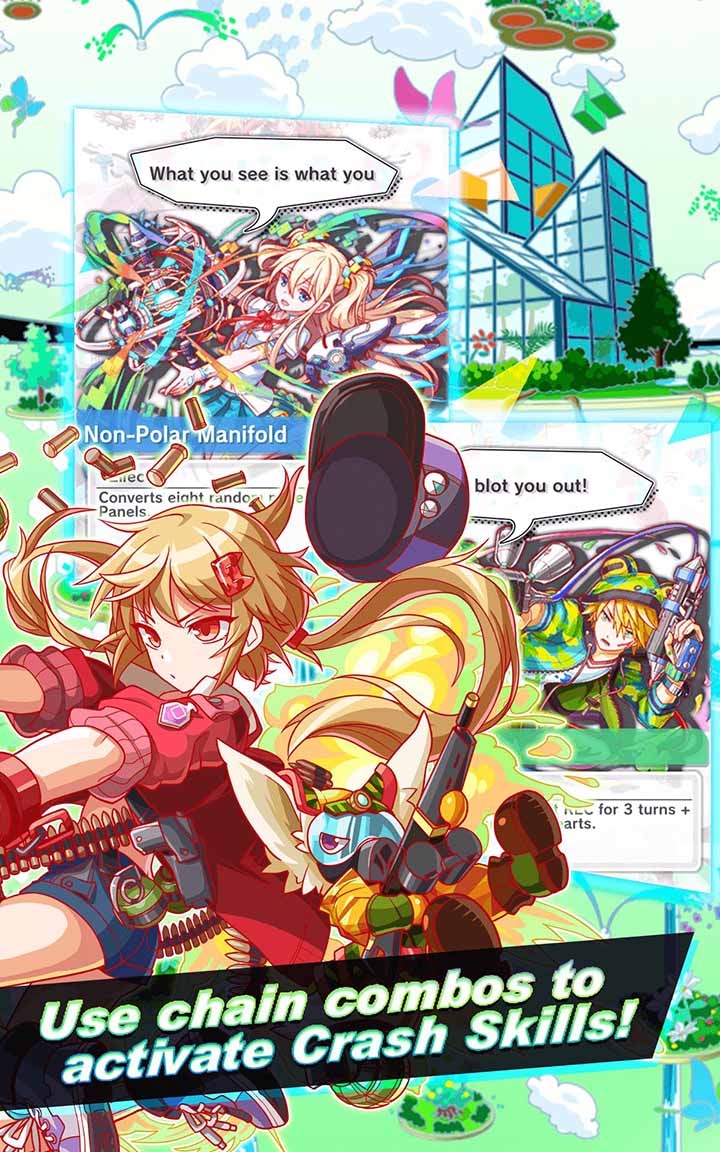 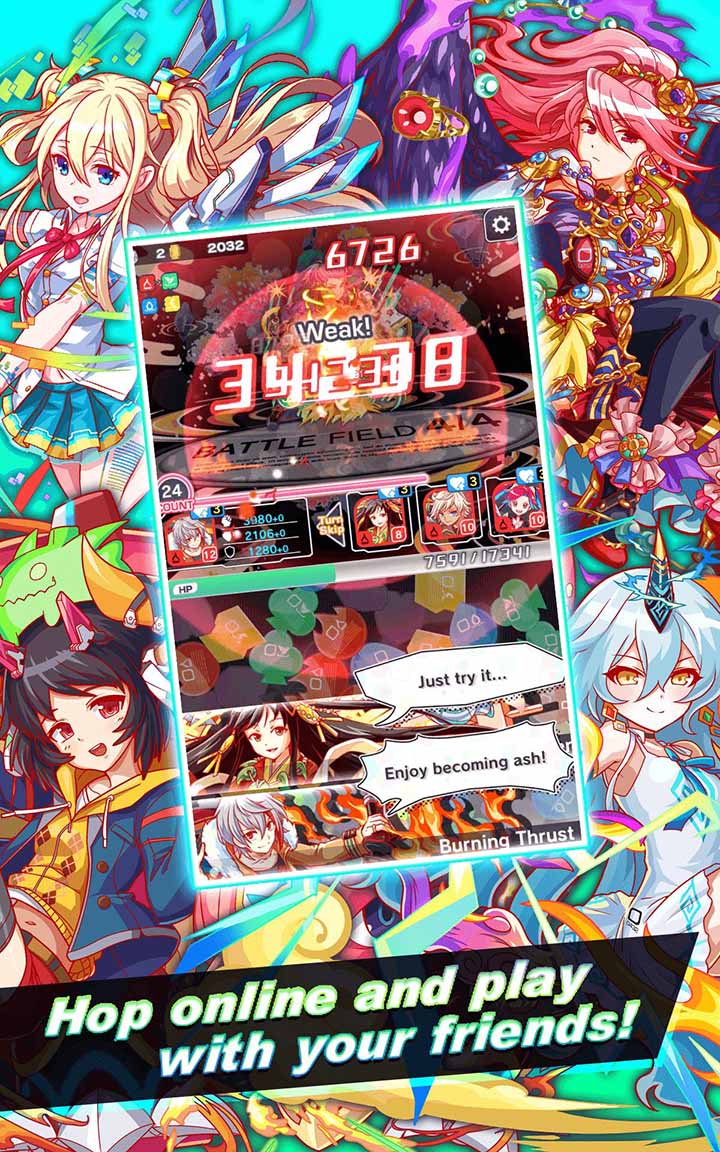 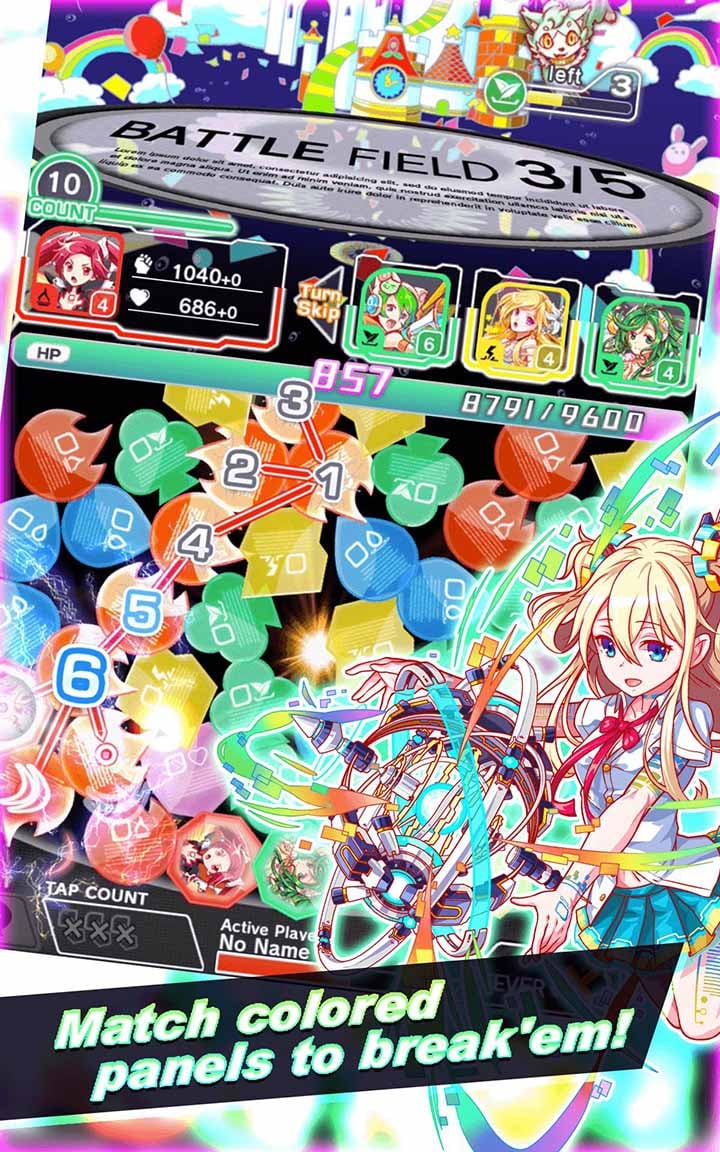 Entering the combat, you will see the screen interface is divided into two parts. The place that shows the match progress will be at the top, while the puzzle area is at the bottom. Then, the party will start with different characters and different power types. Depending on the power type in the player’s squad, the puzzle area shows the corresponding number of colors which match with that power type. Plus, the puzzle area has a different design in comparison with other puzzle counterparts. The first thing players will see in this area is the messy arrangement of colorful blocks. However, their positions are still close to each other, helping the battle not stressful much.

The combat is based on the turn, and players need to connect the same colour blocks. You have to join them as much as you can. The damage attribute will base on the colour of the block to produce a corresponding power. For instance, the red block deals with physical damage, whereas the blue one deals with magic damage. However, if you can connect the coloured blocks at the right time, your character can be activated their special skills. As mentioned before, each character owns an ordinary skill which is activated after players connect enough blocks of the corresponding colour.

And the RPG factor here is that the player makes an adventure in a vast fantasy world that is surrounded by lots of mysteries. When the player paths further, the challenge is more complicated, requiring the player to overcome hard times. But after completing these difficulties, you will be rewarded with a very generous prize.

What Are Festival Units?

The Festival Units are gained through Festival Banner or Festival Gacha. They are considered as the top unit tier in their respective factor. Some Festival Units can be earned during advertised festival gacha, but they may have a low pull rate. In terms of power, they have potent stats. Their skills allow you to have board control and counter a gimmick.

How Can I Defend It?

There are three main ways to defend. First, you can heal or skip your turn, which helps you to avoid triggering the bosses’ mechanic. Second, you can prepare the field by removing 1 or 2 panels, which are in the way. The last method is using a defensive skill, and there are three kinds of defensive skills as follow:

How Can I Skip My Turn?

You can skip your current turn anytime you want by tapping the Turn Skip arrow. It is on the right of the active unit. And when you skip your turn after touching some panels, the panels’ effect will still occur.

When and Why Do I Have to A Fever?

The Fever helps you to restore health and deals with damage, which depends on the average panel hit amounts. It means that you can use it to finish an enemy or employ it as a panic heal. Even if you get enough confidence, you can use it to deal damage. Frequently, people use Fever before using skill Lancelot to wipe the board and get back Fever meter. By doing that, none is wasted. Nevertheless, this will require your understandings of the whole quest.

What Is the Ranking?

When you play the game, you will be split into different groups. Then, you have to compete with each other. This is used to rank your position. To be more specific, you run the Ranking Quest. Here, your performance will decide the points you can gain, and these points will be counted and accumulated when the quest finishes. So, every player needs to compete to achieve the highest score overall and in a group. From that, they can get a more top ranking.

The ranking score will be determined by three following factors:

Which Apples Do I Need to Feed My Unit?

Each type of apples will give you absolute power. Red apples provide an attack. Blue apples increase healing, while green apples are used only for units having skill scales off damage. Depending on the situation, you can mix up some apples. You should consider which method is suitable in your case most.

Crash Fever is a beautiful game. With the white background, every graphic in the game looks so vivid. Although some people complain that they are a little bit turn-off when they cannot play the game offline. Is this evidence that Crash Fever is all the rage? It is apparent that it worth your time, and you will not regret it when falling into this game. So, why do you still hesitate? If you are a puzzle game enthusiast, this Crash Fever is just for you!