Originally released in November 2011 by Gsam Labs, Gsam Battery Monitor by far has received immense love and attention worldwide. The app is now available in over 20 languages; all of the most popular languages are included.

Suppose you are frustrated with your Android device’s battery drainage. In that case, Gsam Battery Monitor can help you find out everything from which apps drain it the fastest to how much time you have left before recharge and much more.

Gsam Battery Monitor offers more utter monitoring features than the Battery Usage app in Android by default. It operates based on the same battery data with the default component. Still, it allows users to have complete control and deep exploitation over their battery usage.

This app doesn’t have a fixed design. It provides users with 8 different themes and dozens of color arrangements to let you customize its appearance.

It also offers a set of add-on icons to replace the battery symbol. You can choose one of them to show in the notification bar, indicating how many battery percent left until the next charge. To customize the icon, go to Preferences to select the theme.

The developers keep adding more icon packs in some recent updates and allow you to download available icon packs or create your own ones. For more information, you can read the detailed instruction on their Blogspot. We’re not going to dive deep into this to keep the article concise.

Besides, Gsam Battery Monitor displays quite a lot of data on its main screen. You might feel a bit confused at first, but the longer you use the app, the more information and feedback it reports to you.

When entering the app, you can see the main screen showing most of the standard functions. They are time estimating, different components’ power usage such as the Screen, the Data Connection, the Bluetooth, etc. Other additional options are in the Menu button.

On top of the page is the Time Remaining zone. The time shown in this area is estimated average usage time and the last minute usage time. For instance, “last 1 min usage: 5:16” means there are 5 hrs 16 mins left based on the device usage over the last 1 minute.

Under the Time Remaining is the used percentage at a certain time. For example, “Used 10% in 30m50s” means your battery has consumed 10% in 30 mins 50 secs (from the moment you unplug your device).

At the bottom lay the Averages Per Complete Charge. This section calculates the average time the battery lasts and the screen on time on a given charging period time after time. These numbers can fluctuate tremendously at first, but they tend to even out over time for more accurate tracking.

Gsam Battery Monitor can tell you which individual apps are the battery drain-source on your phone with the App Sucker function. It will help you understand exactly how an app is using your phone. In this task, you can sort all of the apps on your phone by many categories and see each app’s battery usage details by clicking on them one by one. 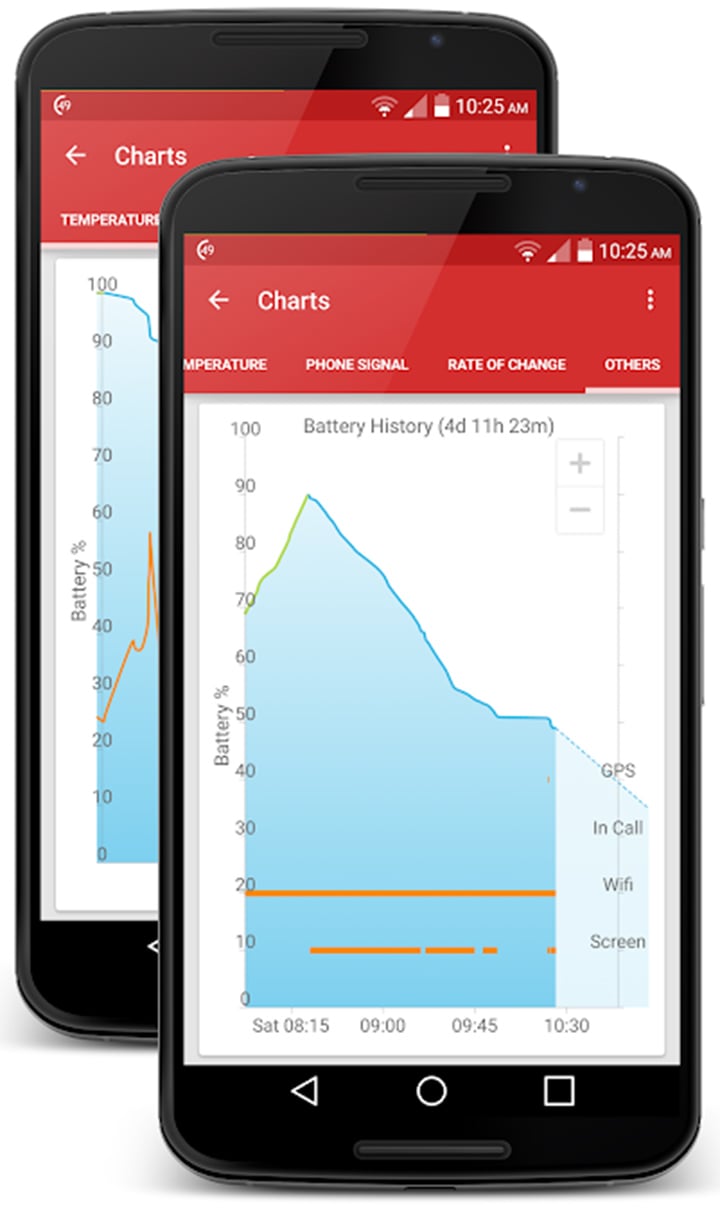 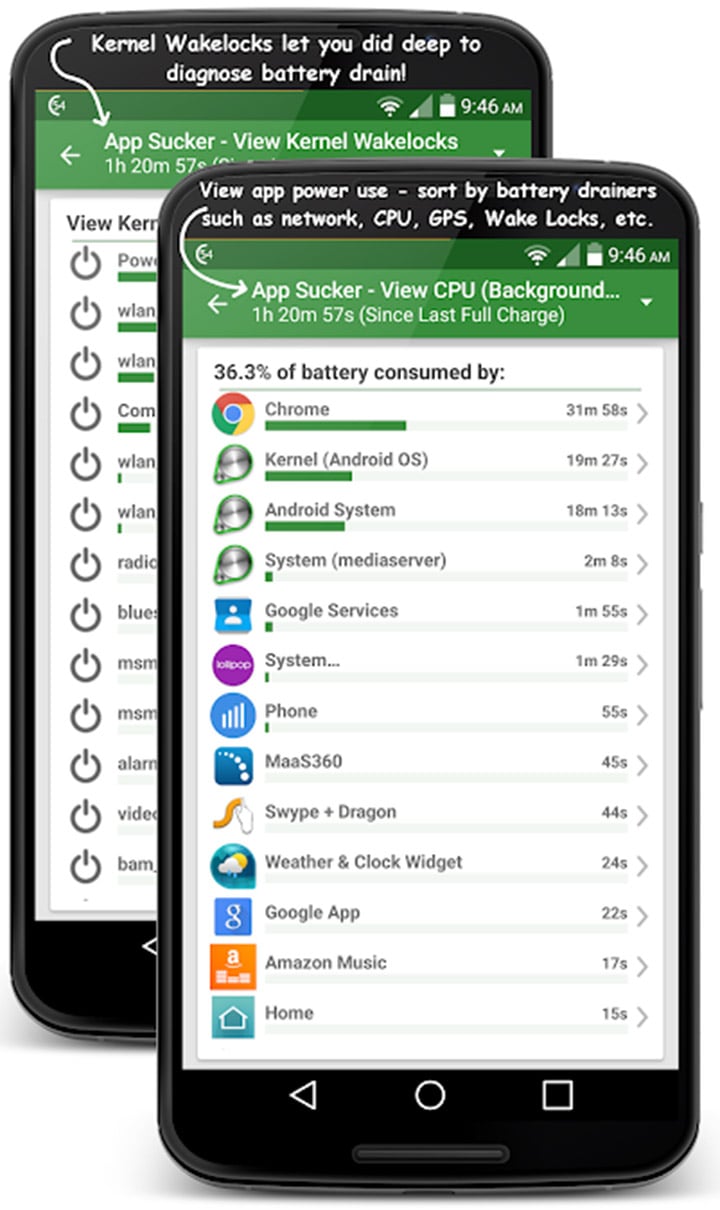 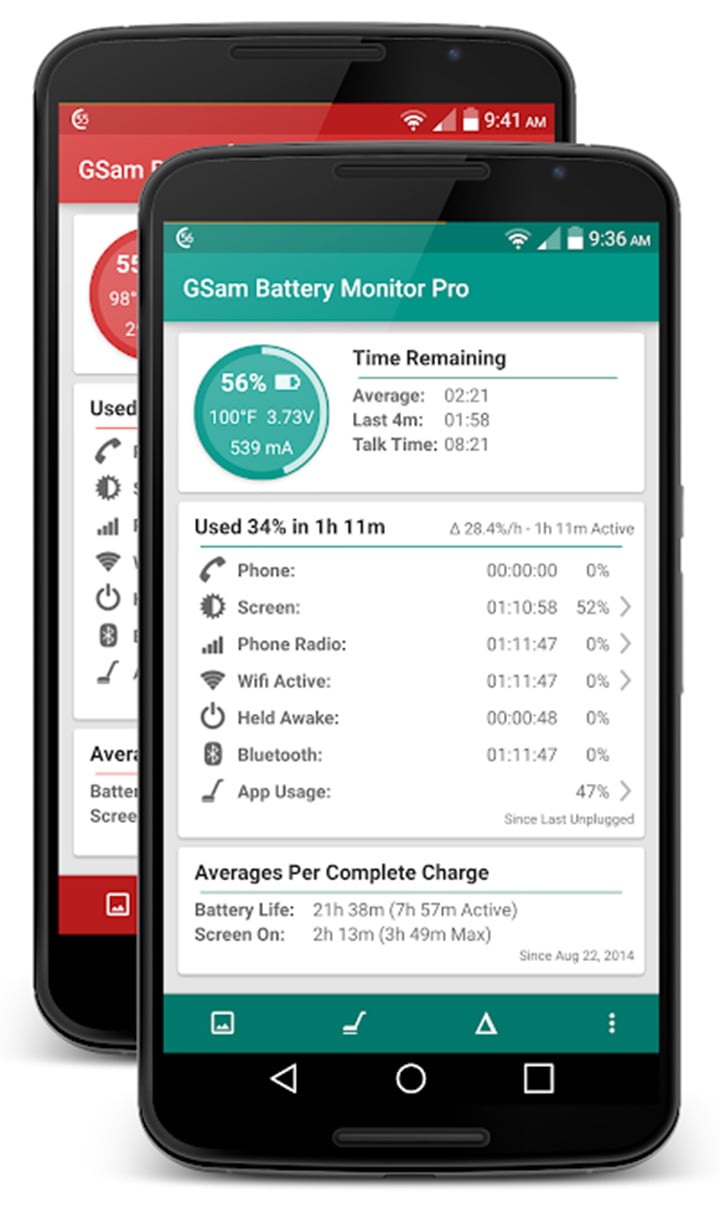 Some filters you can apply to view the apps’ statistics consisting of:

The battery percentage will be shown through charts, which expresses the change over time and what is happening at a reference point. There are 5 types of graphs as below:

Gsam Battery Monitor gives you a review over the battery life, screen time, Doze Time averages, and so on through history statistics. It shows you the data since a certain point of time, such as:

Gsam Battery Monitor not only digs deep into the battery statistics but also displays the collected information in an easy-to-track way.

There’s a notification bar that shows battery status and estimated time remaining. This is an optional feature; you can hide it whenever you want.

In addition to the bar notification, this app includes widget options for quick tracking battery status. You can choose to add a widget displaying battery percent and time remaining on your device’s home screen. There’s also a DashClock widget showing all sorts of battery details. You can enable this widget via the DashClock Extension.

Besides, you can set alarms when the battery hits a certain temperature or a specific charge status.

The Pro version comes with some upgrades compared to the free version for better operation. On large mobile devices or even tablets, it can run on full screen and optimize the view for a clearer vision over tons of data.

Besides, GSam Battery Monitor edition also adds more accuracy to the time left estimates on devices with long standby time. This feature helps you get more precise battery time when leaving your tablets in standby mode for a long time in a day.

The Gsam Battery Monitor (free edition) always has advertisements shown at the bottom of the screen. It’s kind of annoying, but not everyone knows how to turn it off in the Preferences setting.

The Pro version also gets the upper hand this time. It completely blocks all ads without requiring any action from users.

On the downside, the app itself eats up about 2-3% of the system’s battery. But at the end of the day, this consumption is not a really high number.

There is also an option called “Allow Anonymous Usage Reporting” in the Preferences menu. This feature will send your battery usage details to Gsam Labs. According to the developers, they use this option to improve the app, no confidential information is required. However, mobile apps collecting personal information is quite a big concern these days, so you can turn it off if you worry about this problem.

Overall, GSam Battery Monitor Pro makes your mobile device’s battery work more efficient and last longer. Not only does it monitor the battery life of your Android device, but it also shows you which functions or apps consume the most battery.

By installing the GSam Battery Monitor Pro APK, you will have the approach to one of the feature-richest battery tools without any credit card subscription. Although there are a few demerits, we believe the merits will override the downfalls.