Besides, the game is designed with bright graphic. You will see the treacherous terrain with a mixture of ice, snow and rock. Time also can change in Hang Line: Mountain Climber. You will start to climb the mountain in the morning with a blue sky. But with some levels, the players can climb the mountain in the afternoon when dusk is falling or at dawn. In addition, to increase the level of difficulty, the publisher has added some obstacles to the game. For example, ice, boulders, and molten lava, … Besides, sound is very powerful and realistic. The noise of a helicopter is hovering overhead. Or a cry for help of the people is in the mountain. They will make the game be more realistic. 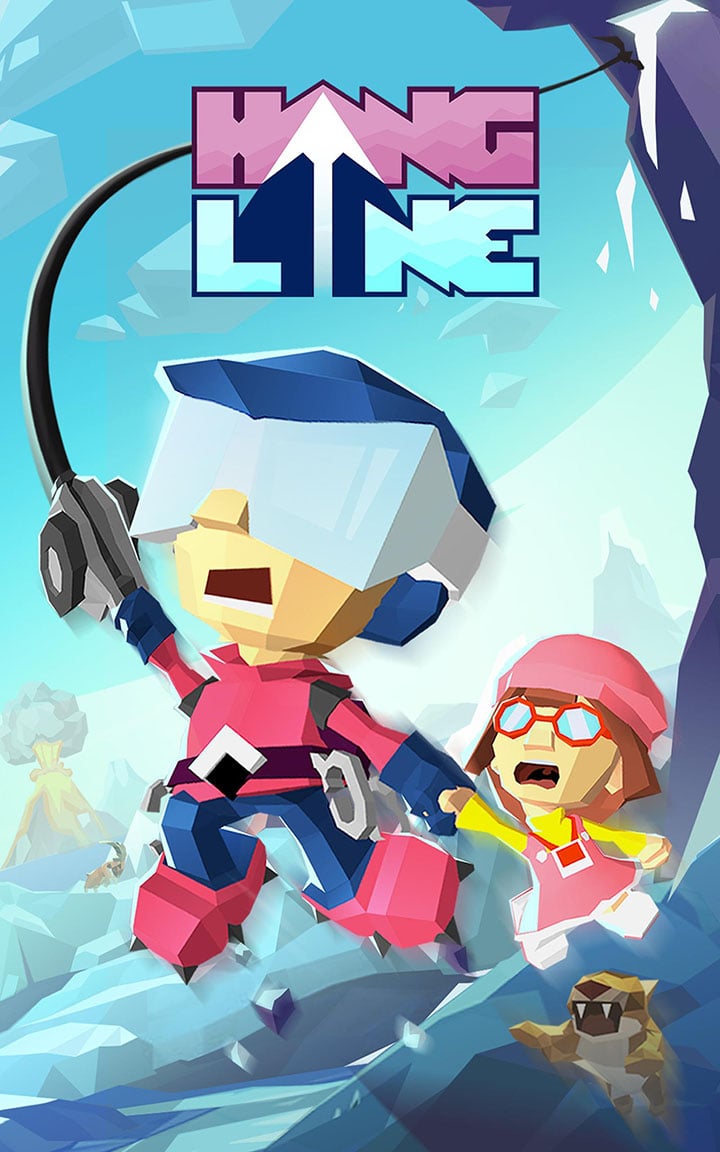 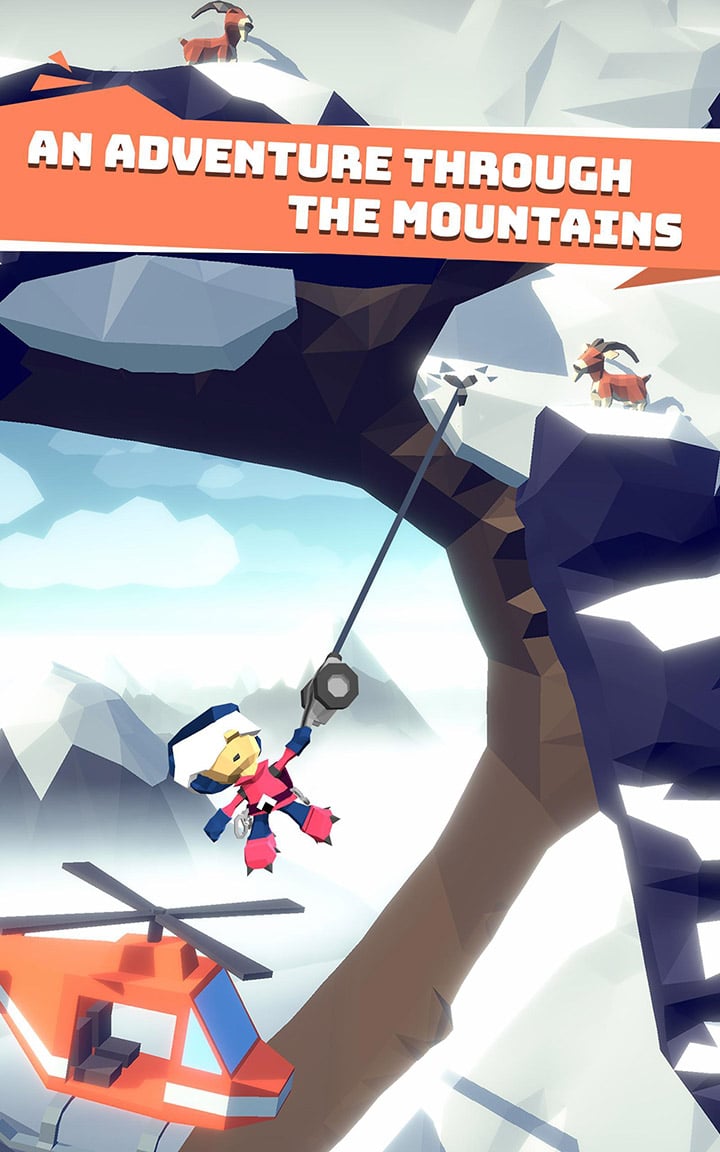 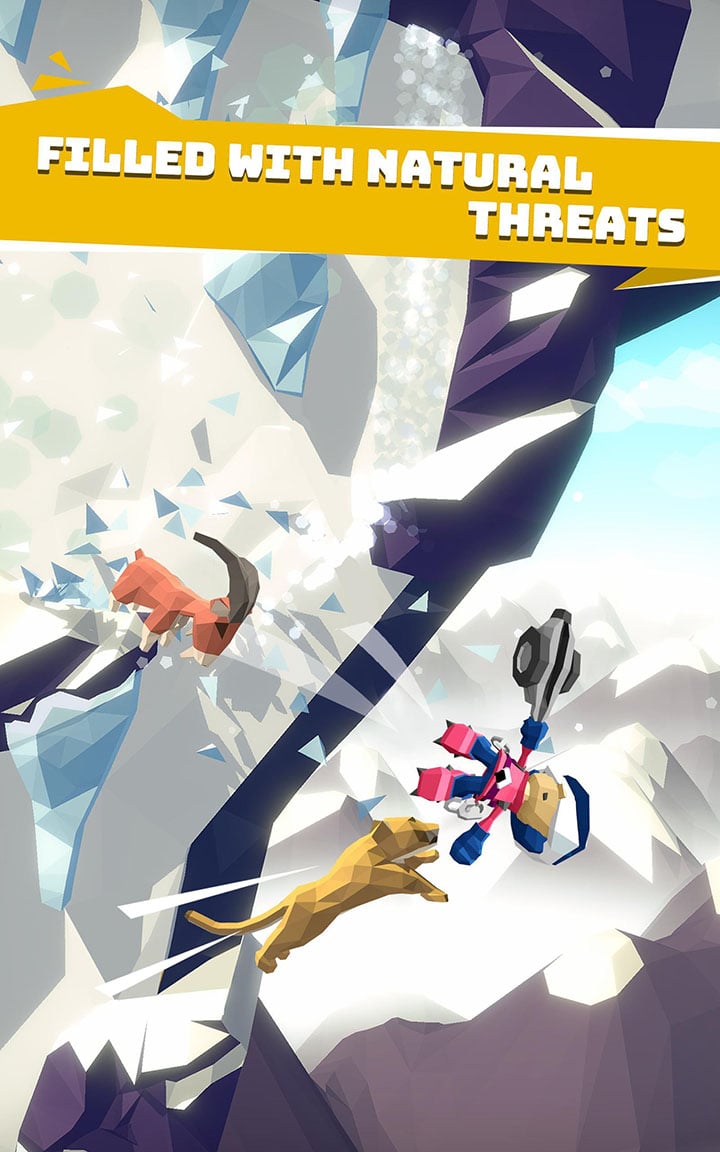 In real life, the climbers will take a lot of time to climb a mountain top. But with Hang Line: Mountain Climber, you can climb the mountain top in a minute. Start the climb, the helicopter will drop you in a certain location of the mountain. You will use the grappling hook to climb by touching places where you want to move to. But it’s not easy to climb the mountain top. Disasters can strike at any moment. The large rocks and ice are precarious. They can fall down and crush you to death. An avalanche will also appear while you are climbing. Billy goats and mountain lions are potential hazards to the players. They will pounce on you or butt you. If you don’t be careful, you can finish the climb when you still haven’t reached the mountain top. In addition, there will be some explosives boxes in some mountains. They will explode if you touch them. Let’s notice everything around you.

Each mountain will have their own story. So besides climbing, you also have to perform many different missions in the mountains. For example, in the first mountain, an extreme weather research lab was exploded; scientists and workers were separated. Your mission will be to search for and save survivors. The survivors will be in many different locations. They can be easy to find. But sometimes they are clinging to the side of a cliff. This is a challenge for you. Let’s pay attention to the objects around to rescue the characters. There are over 90 unique characters in the game, from normal people such as workers, students to members of royal family like the Queen. But with the second mountain, filming of “Planet of the Goats” ends in disaster as earthquake flattens set. So the player’s mission is to collect cameras, clothes and so on. You will receive gold coins if you rescue characters or collect objects. In Hang Line: Mountain Climber, you will have to complete the missions in the previous mountain to climb the next mountains. The game also allows you to look through the mountains that you will climb by clicking on “WORLD” button.

To attract many characters, each game will have their own special points. Hang Line: Mountain Climber is the same. There are 3 special points in the game. The first game is the diversity of the character and transport. To reach the mountain top and rescue the survivors quickly, the helicopter will take you to the certain location of the mountain. To bring the new things, the publisher has provided many transports for the players. For example, Bunny Balloon, Sharkcopter, Helibus, Bubblecopter, Oversized Drone. You need to use the gold coins to have these transports. Besides, there are many characters that you can choose to climb. You will receive the new character when you have overcome the certain level.

To support the players when they climb the mountain, the game has supplied some gadgets. A radar helps you to see the location of the nearest item or survivor. Thruster will recover back into the mountain after the character is falling off the edge. Repulsor can knock away any small incoming threats such as the goats, cats or dynamite. Or stasis field will protect against falling rocks, avalanches and high speed collisions. You can collect them by logging in and receive daily rewards. Let’s explore the gadgets left. This is the second point.

In addition, the publisher has supported 12 languages in Hang Line: Mountain Climber. Those languages are English, French, German, Italian, Spanish, Portuguese, Russian, Arabic, Simplified Chinese, Traditional Chinese, Japanese, Korean. These languages will help many players in the world to understand their missions more easily. You can choose the language in Setting of the game. This is the last special point. 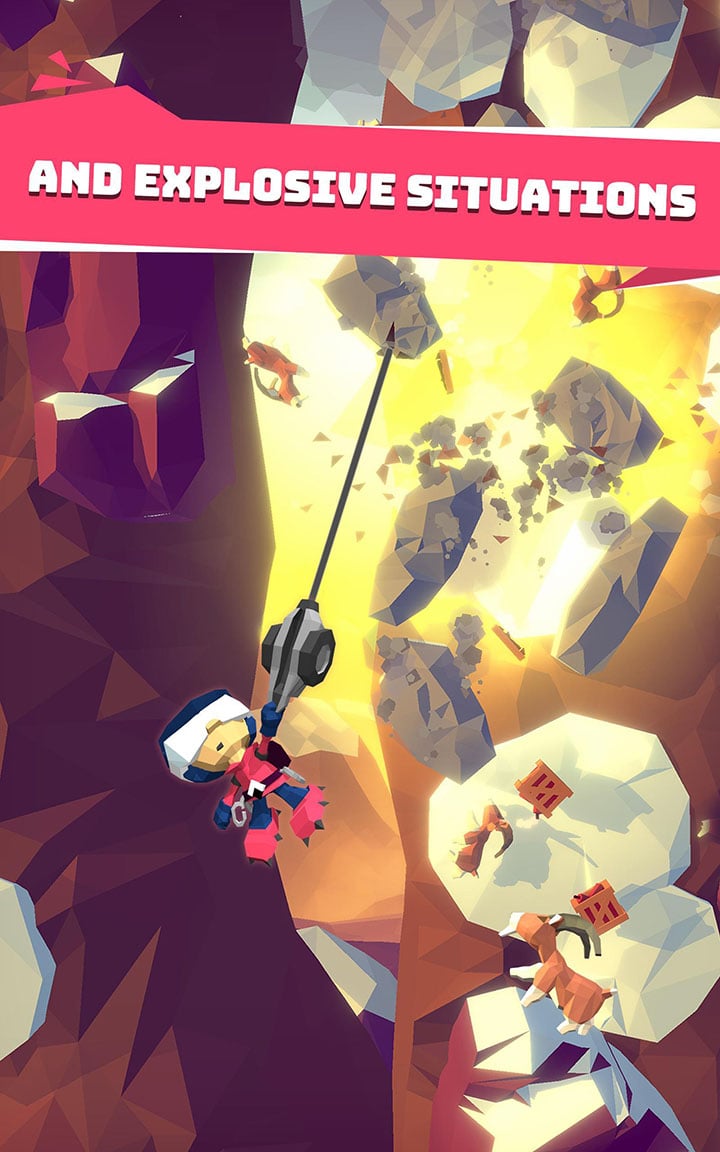 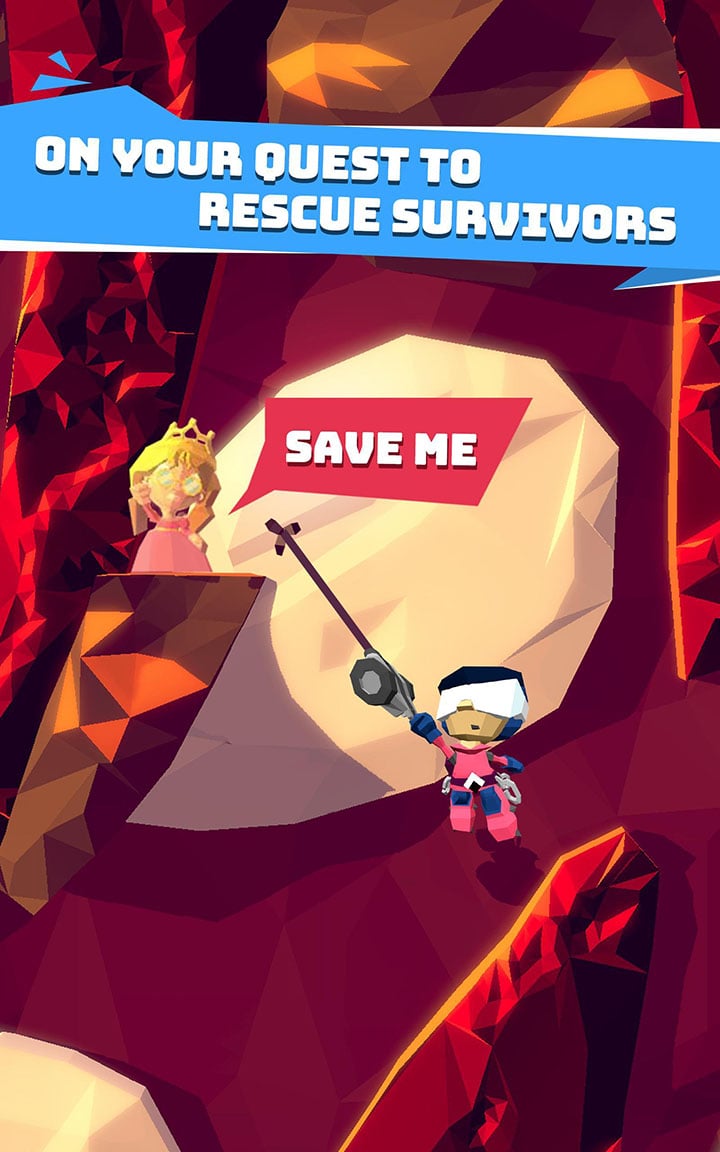 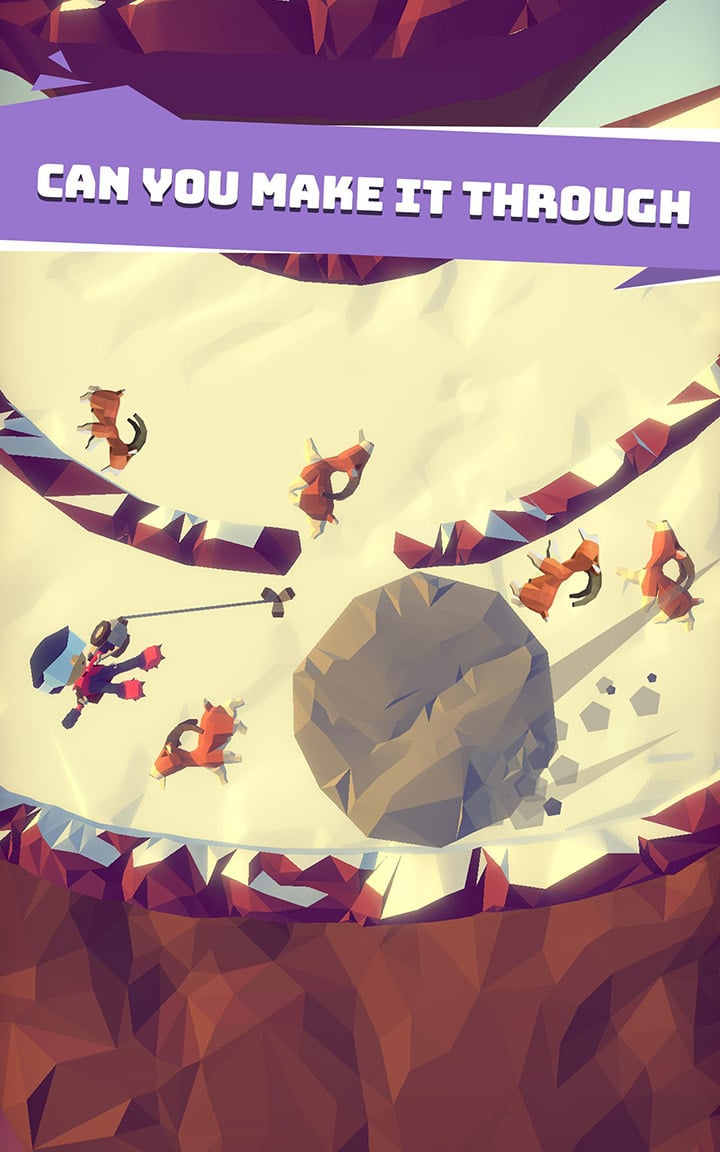 Practice and become the best climber

With simple gameplay, the player just need to use the grappling hook to climb the fiendish icy mountains. Besides, bright graphic and vivid sound is also elements that have attracted many players, from children to adult. Hang Line: Mountain Climber doesn’t require the Internet connection, so it will be suitable for the people who don’t have more time. You can play the game when you want anywhere.

In addition, the player will have to avoid the obstacles and rescue the survivors. This will test your skills. Try to overcome a lot of levels and mountains to show yourself. 4 endless mountain modes and 5 dangerous mountain environments with over 50 levels will help you to improve your agility and observer ability. Moreover, the new characters, transports and gadgets make the game more interesting. Hang Line: Mountain Climber will bring the new experiences for you. Let’s join in the game and experience them.