Who doesn’t love the adorable yellow Minions? If you’re a fan of these crazy creatures and into simple rules games, then the Minion Rush is ideal for you.

Developed by Gameloft and was first released in 2013, This game is now one of the most popular mobile runner games, alongside Temple Run and Subway Surfer. It is definitely an innovative and highly addictive game for everyone to enjoy.

Minion Rush has attracted over 950 million downloads worldwide. Now it’s time for you to feel the rush with these gibberish-speaking creatures! Scroll down for more details of this hilarious running game.

Minion Rush is a single-player game created based on the infamous 3D animation franchise Despicable Me’s most loved characters – the Minions. The game inherited all the characters’ personalities, concepts, and abilities. So get ready for the unbridled funny experience and vibrant 3D cartoon style of graphic design.

The Minion Rush’s story is mainly relevant to the movie Despicable Me 2 & 3. Gru’s loyal beings are now working for the top-secret organization called AVL (short for Anti-Villain League). They need to perform specific tasks, including collecting bananas or collecting stars on the Moon, etc. to combat supervillain activities.

Your primary mission is, of course, running continuously without any restriction. You will play the game by controlling a minion who escapes from the bonds and passes through an assortment of obstacles while trying to “eat” every coin and banana on his way.

Your Minion is eager to do whatever he can to catch as many bananas as possible. The innocent character will face evil bosses on the way without realizing it.

You will visit various locations along your journey, such as Gru’s laboratory, the Durakavalian, the Mignon beach, and several other areas. These places are also inspired by the original movies. To complete tasks and gather bananas, you can earn virtual currency to unlock colorful clothes for the major character, boost his skills, and activate additional bonuses.

We use mainly the items collected for rank upgrading and improving the jam’s recipe – the Minions’ all-time favorite. In old versions, they converted bananas into tokens for unlocking costumes and buying costume cards. In the new arrangements, bananas are used to increase the chance of getting unique Banana Prize Pods. We will discuss this more in the Instruction section down below.

There are many characters in Minion Rush, and they are categorized into three main types: The Minions, other principal characters in the movie, and the villain bosses.

The Minions are the only characters you can control and customize. They can either be Dave, Carl, Jerry, or Mel (a new character from the third movie). On your first visit, your default character will be Dave. Besides their primary missions, these four Minions can also compete with each other in some fast-paced challenges. Paul is recently introduced in the particular mission video clip, but this character isn’t playable until now.

Players can increase their Minion’s more vital stats by buying various costumes for them. Dave is the one who has the most available costumes among the four selections. Later, Carl, Jerry, and Mel’s outfits are also added in the same Wardrobe as Dave. You can go to this section to purchase and unlock different costumes.

The instruction characters consist of Gru, the three girls, and other AVL agents such as Lucy and Dru. Each character will give you guidelines to complete specific in-game missions. They are controlled and built by the developers and not playable or customizable.

In addition to the obstacles, Minions can be hindered by bosses, just like the movie’s supervillains. Currently, there are four bosses, and they’re all available in Despicable Ops. Vector and El Macho are the characters you may know because they’ve already been featured in the Despicable Me series. The other two are Meena and The Villaintriloquis – non-canonical characters created by Illumination Mac Guff.

These bosses usually throw objects towards the Minions and sometimes even try to smash them. You should avoid the attacks and throw the items back to defeat the villains. Otherwise, your Minion is dead, and the game ends. 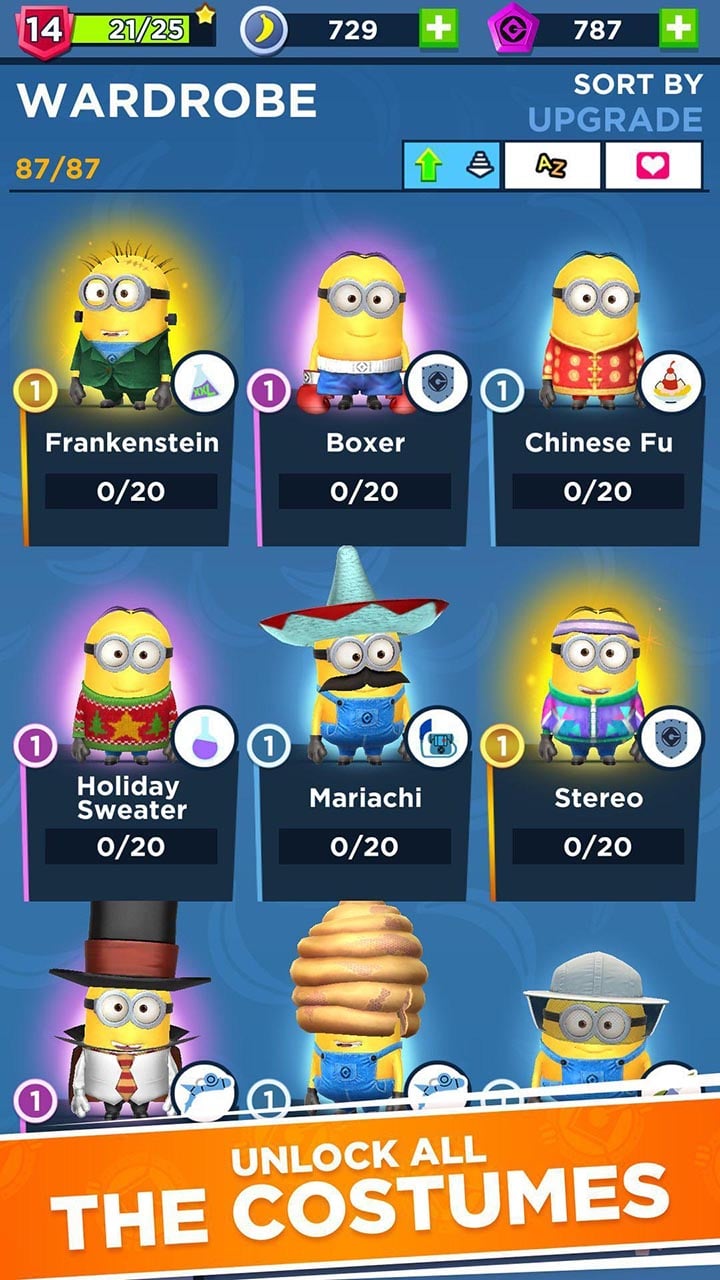 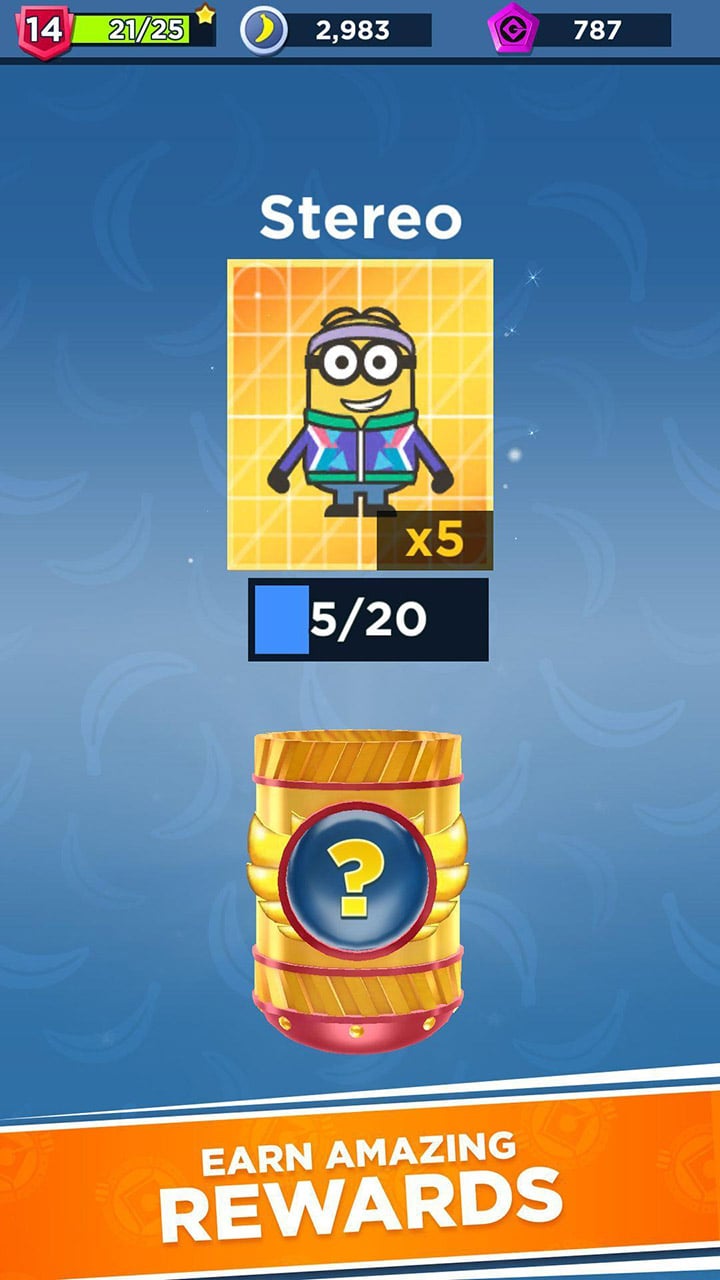 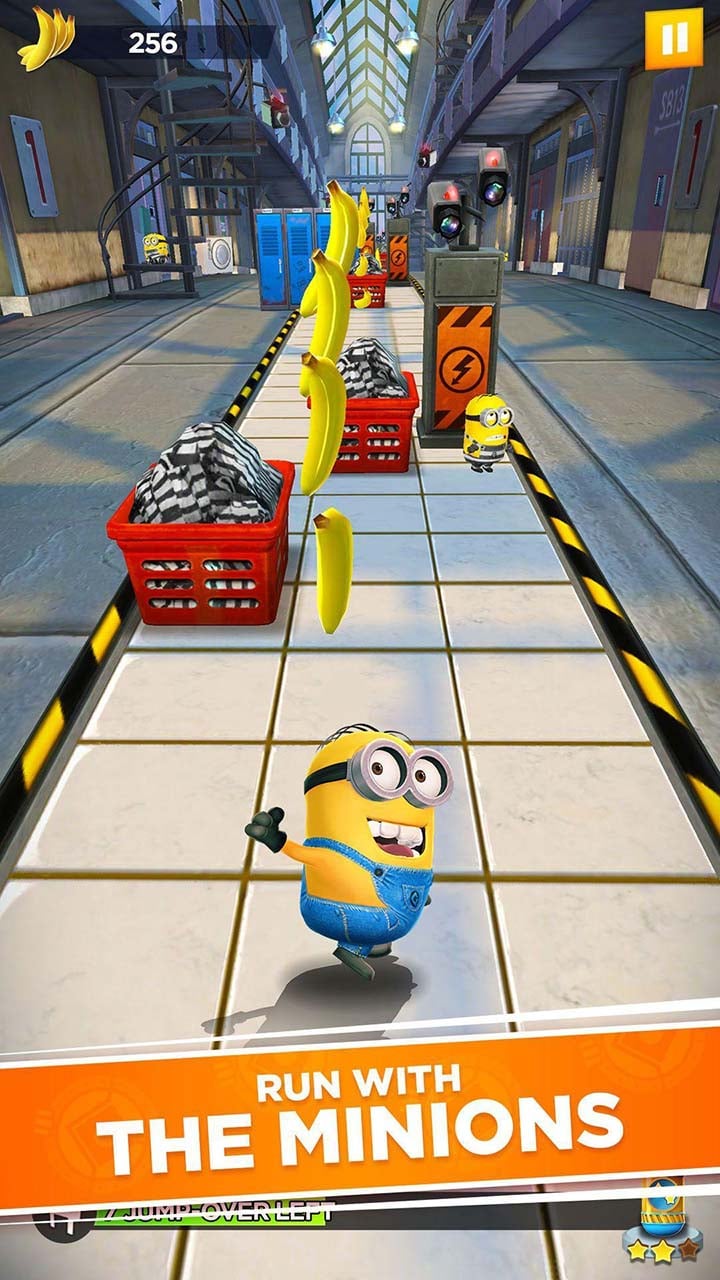 Your main goal is upgrading your level in the game. You will achieve a new title for every five ranks you upgrade, including Up-and-Comer, Covert Operator, Clandestine Operative, etc. The labels also come with coins and costume cards as awards.

As we mentioned before, you will start the game by running with Dave. There are three lanes to run on, and you will see bananas floating on the race, waiting for you to “eat” them. So how to eat them? Like other runner games, let the character pass through them.

To avoid obstacles, you can swipe up to jump, swipe down to duck, or jump onto another lane. Switching between three lanes is easy, too. Just lift your Minion left or right to get to the route you want.

To counterattack the bosses, you need to equip your Minion with certain power-ups. During the race, you can change the Minion’s costumes several times to beat different bosses.

Power-ups are gadgets that execute a particular function in the game. Your Minion can use them to collect bananas, clear obstacles, or attack other minions & bosses.

The costumes are not just the clothes your Minion is wearing. Each costume has its own statistics and power-ups to help the Minion get his missions done. The costumes also have various dashes of styles, not only the jeans overall like in the movie but also the new design added every updated version.

The power-ups integrated into the costumes perform particular abilities. Remember to charge them before use, and you can use them at any point to activate the needed power-ups once fully charged.

Jumping, sliding, and dodging the obstacles are the way to charge the abilities. Combining these actions with collecting bananas and picking up power-ups on the run can boost the charging time. Remember to pay attention to any power-up you pick up while running because it only lasts for 5 seconds.

Besides normal single-player mode, the game also offers special mission mode, requiring players to collect special items at specified places during the race. These locations are separated from available rooms, and each special mission has six different stages, unlike standard missions. At each stage, you will obtain various items, and at the end of the whole tasks, you will be awarded Market Tickets, Fevers, coins, and the special mission’s prize pods.

If you’re getting bored with playing alone, practice in the training mode and bring your own Minion to compete with other players worldwide. By winning the race or beating some of your friends, you will reach a higher rank in the world leaderboard. 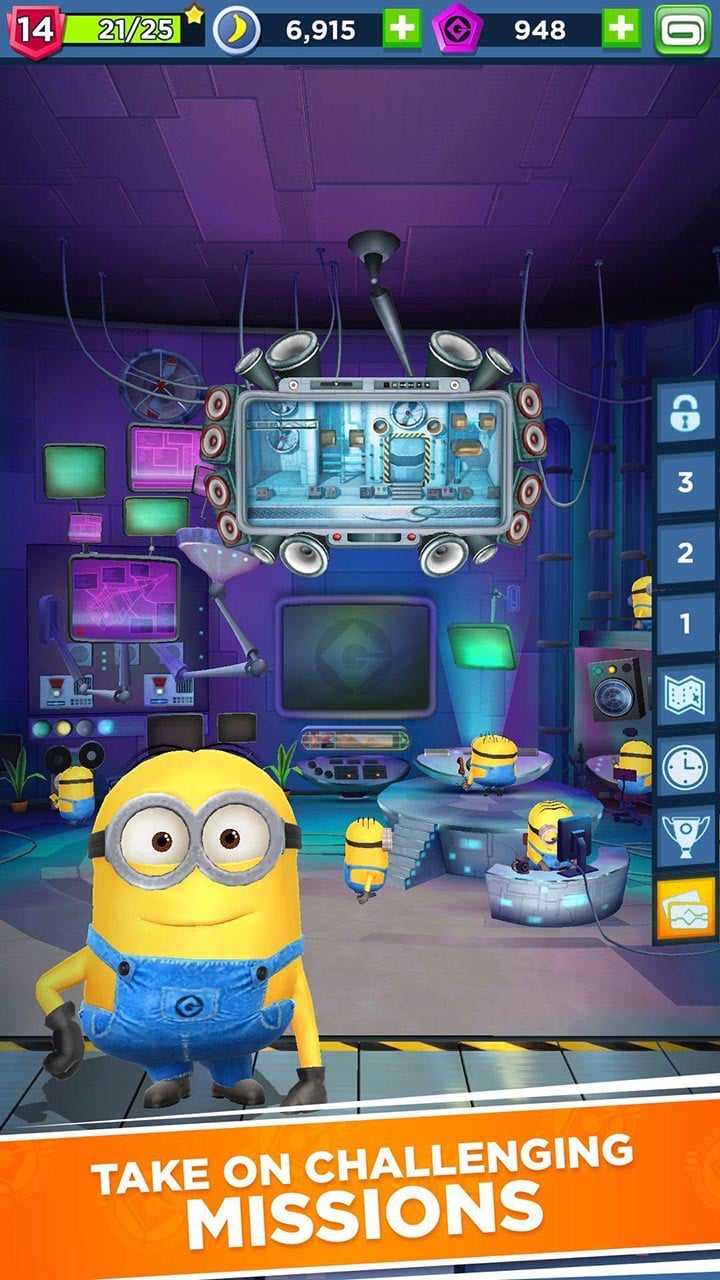 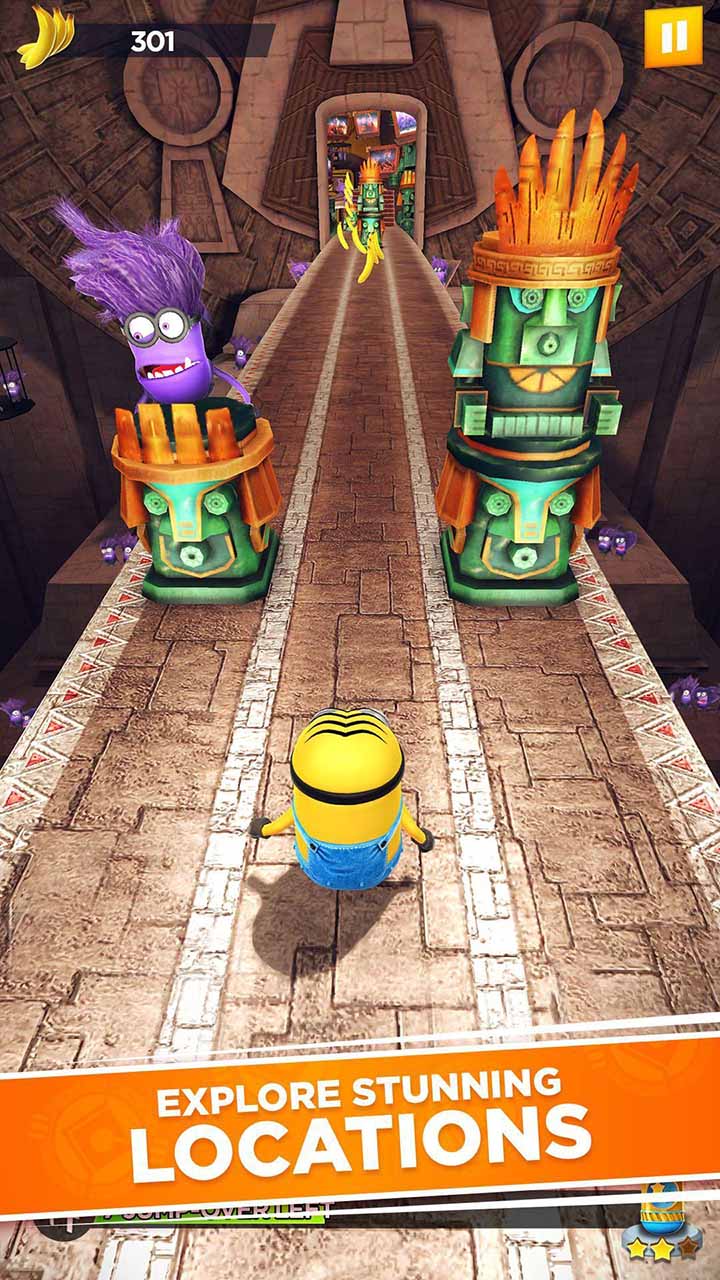 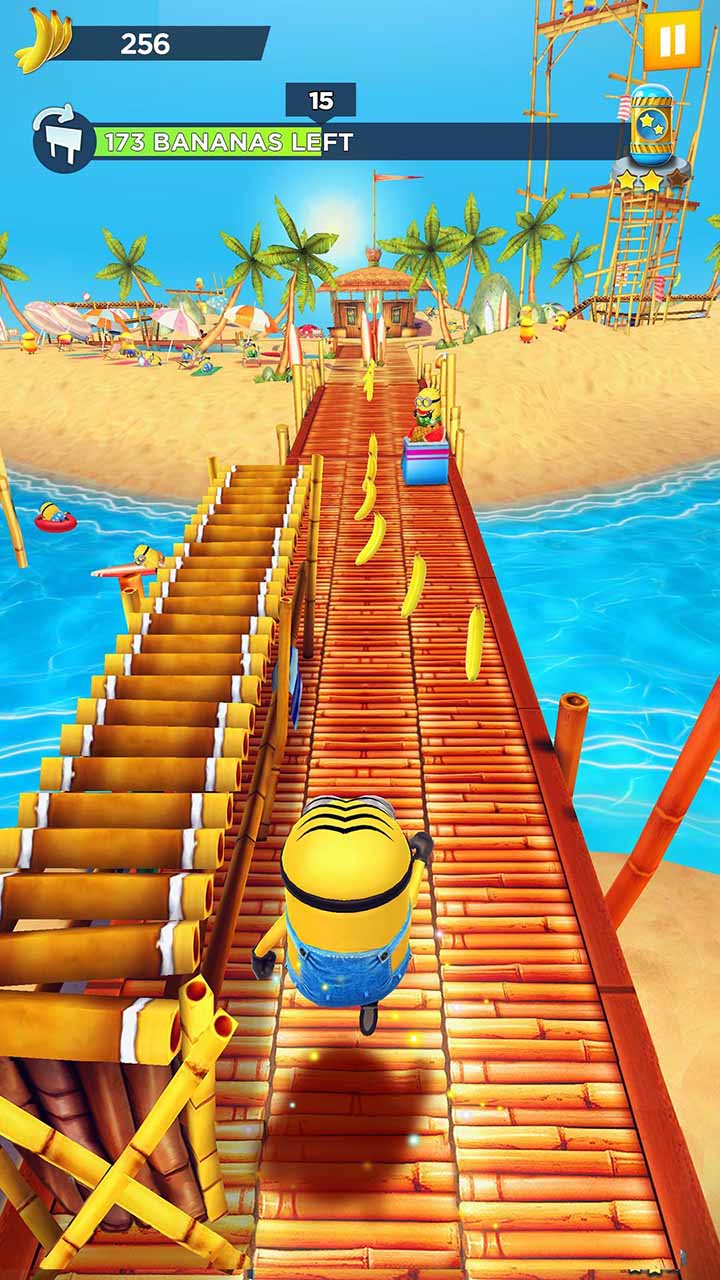 The game has stunning tones of color and plenty of variation even in the same area. The Minions’ voices and gestures are mimicked precisely to express their personalities correctly. Each Minion has a different way to die, and each style is crazy in its own way!

The gameplay also delivers a good mixing experience to the players. It swaps perspective to a side view usually and tosses you into sliding parts controlled by motion.

If one power-up lasts for 5 seconds, then two power-ups totally change everything for their duration. The XXL Potion flips the camera to the front; meanwhile, you tilt the screen to control your giant Minion while smashing everything on his way.

The Minion Rush simulates accurately and recreates the design, graphics, and many characters of the memorable franchise vividly.

The costumes often go in sets, and each has a unique concept. You can choose either Surfer style, Ballerina style, Spy style, Cupid style, Cancan Dancer style, and more for your characters.

The cute and hilarious Minions, alongside unexpected twists, can make you laugh together with your kids, your friends, and even your parents.

No complicated game rules and plot twists. No troublesome weapons. All you need to do is running, swiping to jump, dash to continue rolling your adventure. If you’ve never tried any running games, we’re sure that it only takes you a minute to get used to this game.

Different game modes, such as the special missions and the training modes, are updated regularly. Each contains tons of exciting new stories and costumes. Moreover, they are only available in a limited time before the recent version comes out. Therefore, the game still has refreshing adventures that keep players coming back every day to discover.

In case your swiping acrobatics are fast enough, you will get to a secret area hidden in every usual location in the game. These areas are more challenging and require excellent skills in running games.

The Minion Rush MOD APK gives you access to unlimited money to play whatever you want. It has been modified to use the tokens unconditionally for purchasing.

For the first time, you can choose the Chinese flag in the game, and the download part of the data are also given in Chinese selection. This is also the first time the data packet inclusion has been omitted without importing the game data. The cheat detection is removed as well for a more satisfying experience.

To conclude, Minion Rush has absolutely nothing new to tell. Still, it does much of what it does very well, and the minions sure do uplift their identities with it. It’s enjoyable, it has lively graphics, and the developers did a good job keeping it fresh and challenging regularly.

Be ready to tackle the biggest challenge you will face in Minion Rush. Many obstacles and evil bosses are going to ease you down, but you are overcome by ambition. Let’s prove that the gibberish-speaking Minions squad is unstoppable!