The description of We Are Illuminati MOD APK 3.0.1 (Unlimited Money) We Are Illuminati is an action game that simulates the dark organization Illuminati. You will be a member of the organization, performing every act of pulling strings, manipulating power to create a powerful empire, and dominating the entire universe.

In the world of Illuminati, do you think pop idols, world leaders and aliens have in common other than money, power and cleverly disguised spaceships? They are all Illuminati.

The Illuminati are an organization allegedly conspiring to control world affairs by setting up events and placing hands in governments and trade groups to establish a New World Order. As a pivotal part of conspiracy theories, they have portrayed the Illuminati as hiding in the dark, pulling strings and manipulating power. They appear in dozens of novels, movies, television, comic books and video games.

We Are Illuminati is a great simulation game featuring the dark organization Illuminati. You will join their ranks and the mission is to influence as many people as possible through the means necessary. Then, you will control people’s minds, create fake news, hide hidden messages in music videos, and put strange chemicals in water sources. These are the ways you do for you to dominate the world in game.

However, first, you need to choose your favorite character. Practice world domination skills by influencing everyone and turning them all into docile sheep. Conquer, dominate the minds of people around the globe by clicking on your master plan and waiting for the result like a true boss of secrets. And work hard to dominate everything and everyone.

You will wiretap in secret conversations by wiretapping in the offices of world power leaders and generate fake news to manipulate their plans to match the dark plans. Then, consider all your influences that can help you create a new world order and prove the conspiracy theories right and give them more theories. Finally, make deals with aliens, take control of world affairs from the dark, recruit pop idols and Hollywood stars, and gradually climb to the top of the Illuminati.

The Illuminati were a secret Bavarian organization during the Enlightenment period and were established on May 1, 1776. They often portray the Illuminati as their members trying to conspire to control the world behind the scenes. They sometimes use Illuminati as a synonym for new world order.

In the European Reformation in the 16th century, many mathematicians, physicists, astronomers, and artists at the time were members of the Illuminati such as astronomers Galileo Galilei, Nicolaus Copernicus, Gior Dano Bruno, and master artist Gian Lorenzo Bernini.

With the increasing strength of the Illuminati, the Holy See felt a great threat. They would not tolerate the continued existence of such an organization that aims to promote science and oppose the church. Therefore, the Holy See launched a purge campaign, using brutal killing and deterrence to force the Illuminati to disappear.

Adam Weishaupt, a professor of practical philosophy at the University of Ingolstadt in the Kingdom of Bavaria, promoted the Enlightenment-Perfectibilism (Perfectibilism), which was established on May 1, 1776. The Possibilities’ Association was renamed the Bavarian Illuminati in the same year. 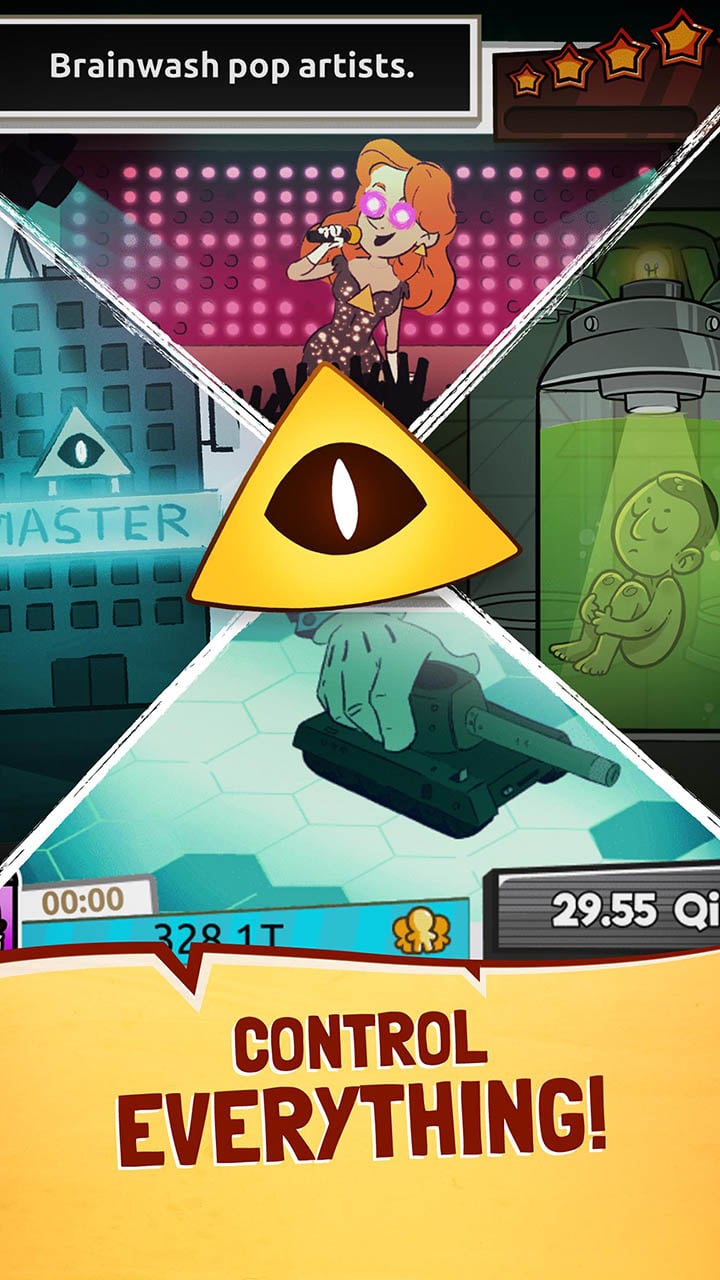 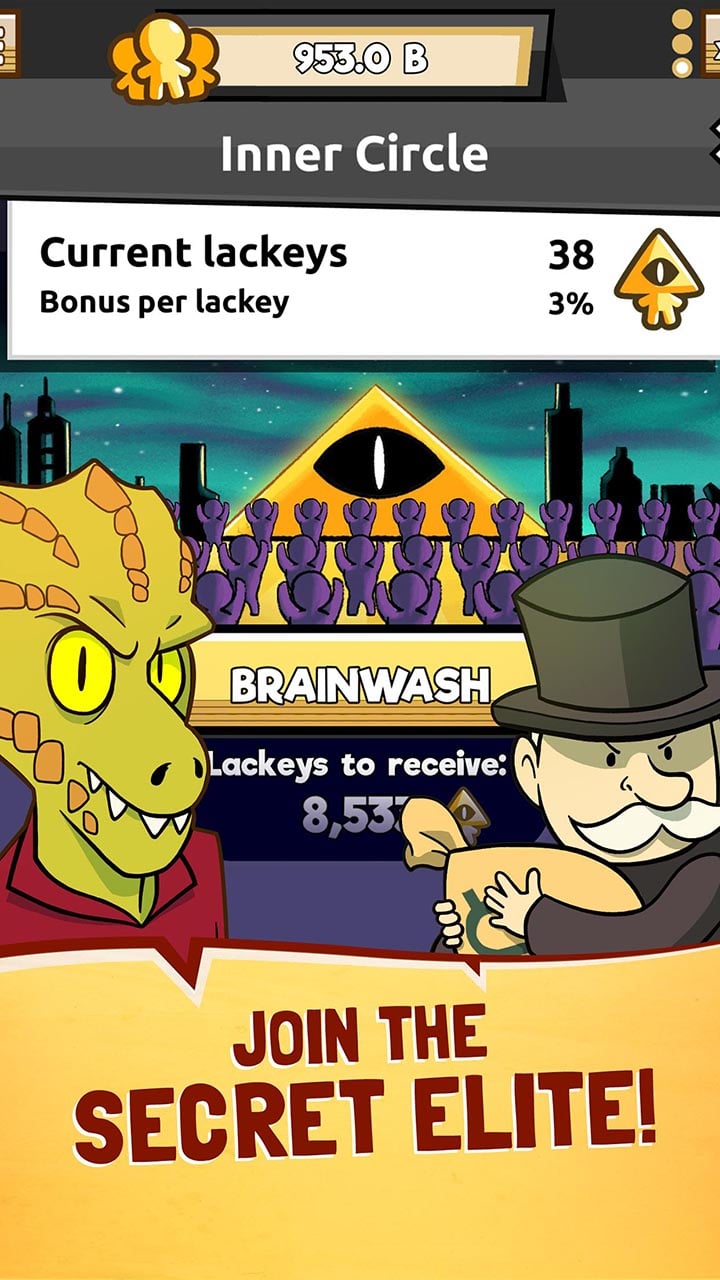 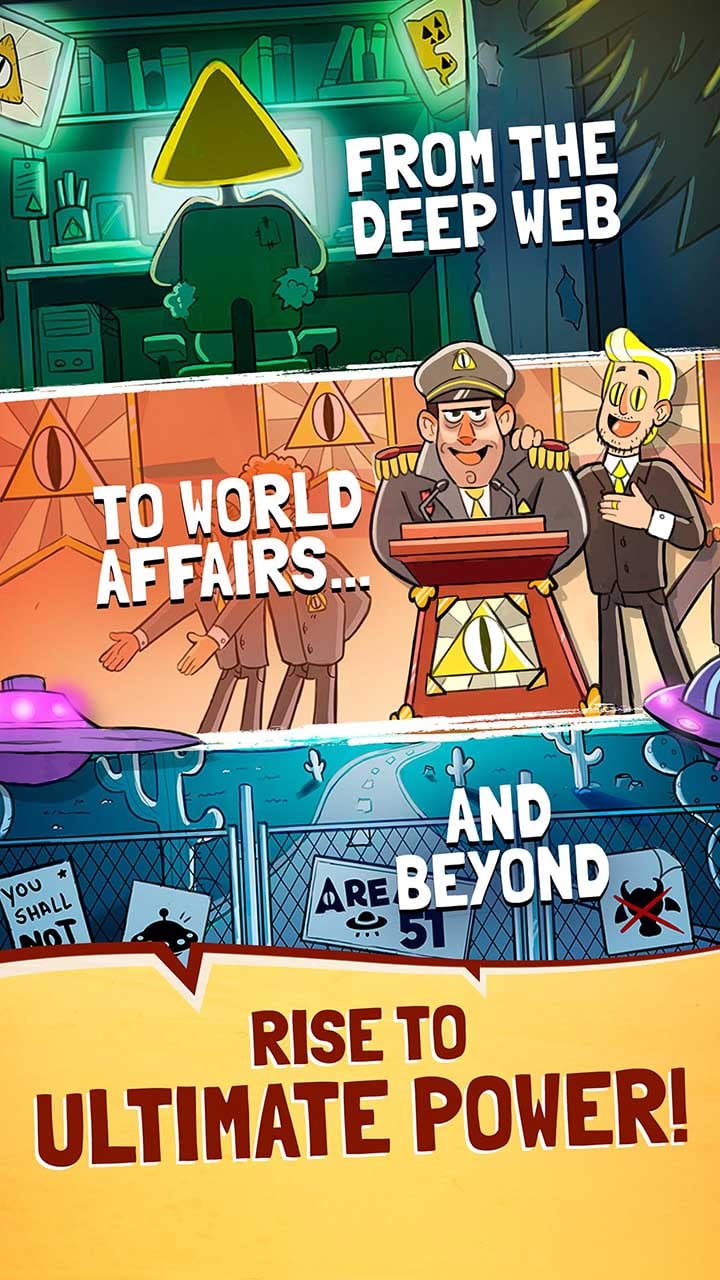 We Are Illuminati is a click-and-place casual mobile game with animated comic style. It uses the historical mysterious religious organization Illuminati as the theme element. It has fun and spoof gameplay. Players need to expand the light in various ways, and the influence on the world will eventually rule the world.

We Are Illuminati is an interesting simulation click game in which players will control the world through the Illuminati. Distribute flyers, control your mind, hide information in song videos, and influence more people to join the Illuminati. Practice the skills of domination of the world, you know that you always want to practice by influencing people to turn them into happy submissive lambs.

You will surpass your fellow Illuminati members and take over the earth in the game. But remember that if you do not sit on the highest chair, you are still a lamb. Trying to dominate not only our world, but the other two planets as well. Why stop on Earth when you have a strong connection in the universe? Eavesdrop on secret conversations in the office of powerful world leaders and manipulate shady plans that suit you.

Enjoying all your influence can get you to create your own new world order! Prove the rights of conspiracy theorists and give them more inferences. Make deals with reptilian aliens to control world affairs from the shadows, recruit pop idols and Hollywood stars in your way without doubt, and slowly climb your way to worship the bright boss. 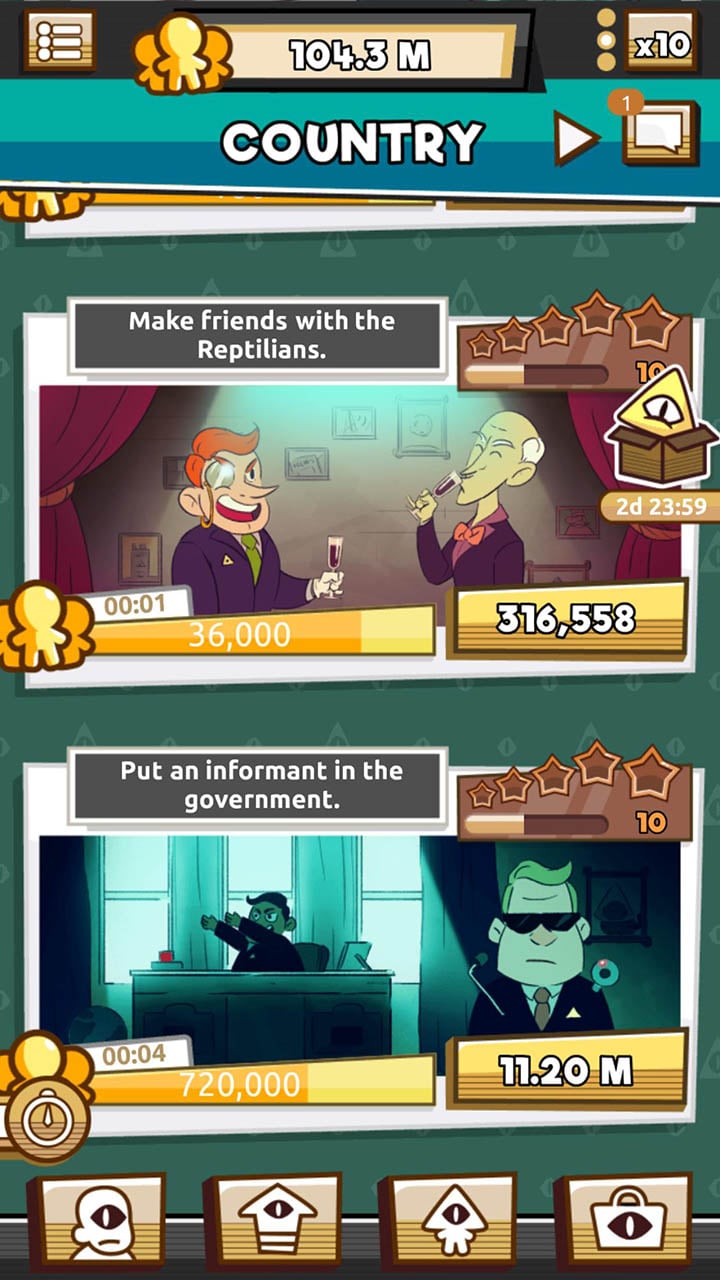 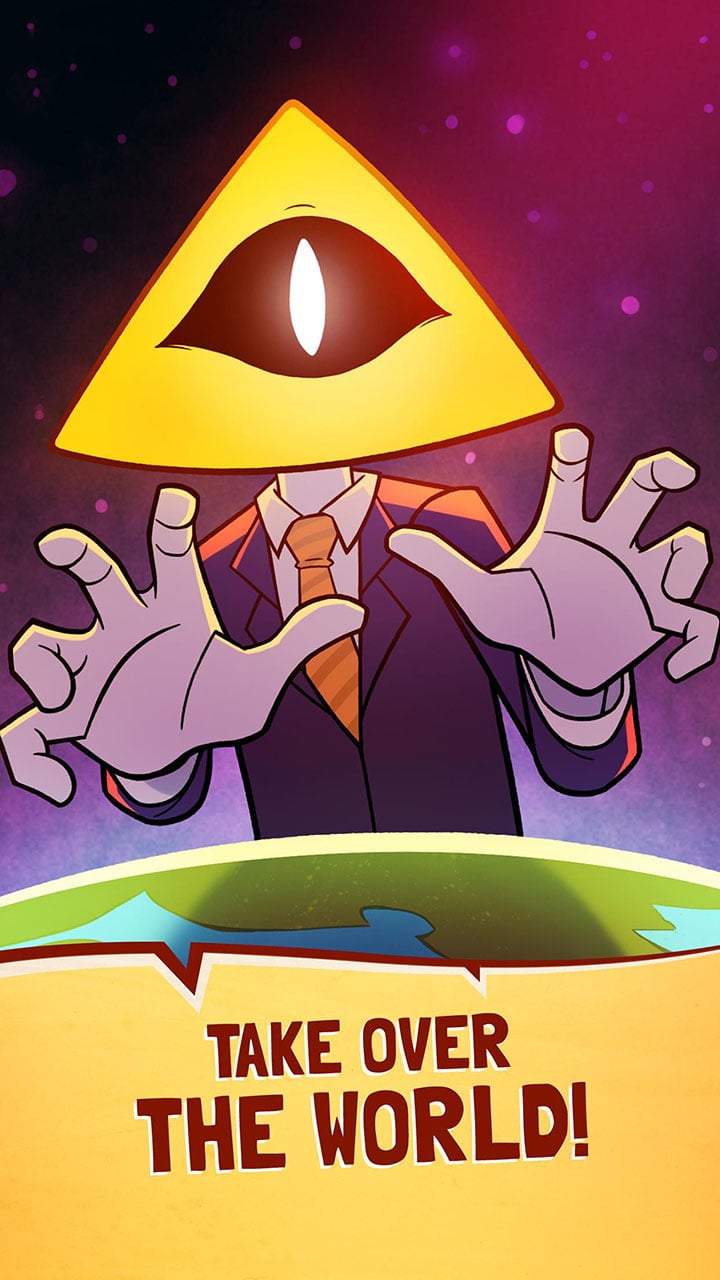 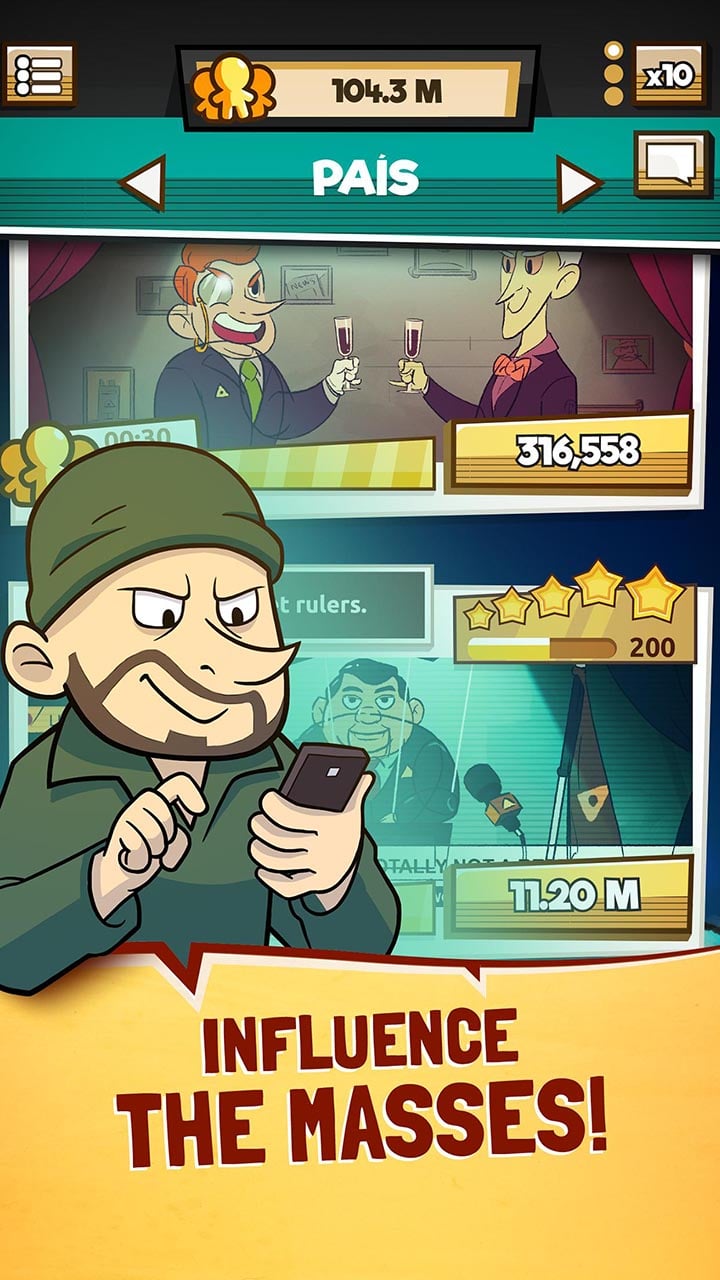 Forming the universe has gone through over 4.5 billion years. During that time, there are many unknowns, interesting things that very few people can fully understand. Cell to Singularity will give players an overview of the formation of the earth and the evolution and development of humans and creatures.

In Cell to Singularity, the entire process of the earth’s development and the evolution of cells, animals and plants are summarized in a general analysis. It can be called the Evolutionary Tree. Plants will develop from the world’s first cells and develop through stages of division until the first animals appear. And even when humans formed, they developed through bronze and iron civilizations until modern times.

At each evolutionary level in life, players can perform upgrades to increase the number of individuals, ingredients of the ranks. Each individual will give players growth scores per second in the game that can help players upgrade higher levels of life.

In We Are Illuminati, the omniscient eye of the Illuminati is your character image. With various methods, whether open or dark, your goal is to control the thoughts of people all over the world. Help you one after another who are trapped in the dark to help them move towards the light and achieve the goal of ruling the world!