The description of Where’s My Water 2 MOD APK 1.9.9 (Unlimited Money) Where’s my water? 2 – a unique puzzle game was released by Disney Mobile in 2011. The game is so unique that when it was released, there was not any similar game  to it to compete.  Why is it special? This puzzle game does not require you to match gems or candy, does not require you to move blocks or arrange the pieces of the puzzle, all you need to do is to “dig” the ground so the water can go to the character’s bathroom and fill their tub. It might seem easy but is it really easy? Because an easy to play game will not be attractive enough to keep people playing it. But the game is actually not as easy as it looks, proof is until now the game reached over a million downloads on Google Play only with almost two hundred thousand positive reviews and reached 4.7 out of 5 overall rating. Two year after the first part was released, Disney Mobile finally released the second part of the game to continue the story of part one with many more interesting features. The game was a big hit at that time, it’s so successful among puzzle games that it reached over one hundred million downloads on every platform, over 2 millions reviews on Google Play even though the overall rating was only 4,3 out of 5. What makes the game so successful? Let’s find out, shall we?

Just like part one of the game, players will again meet three main characters: Swampy, Allie, and Cranky – Personality and mischief alligators. Swampy – our main character, is a very nice and organized alligator. He likes to be clean and even though he is shy, he loves his Rubber Duck and loves collecting items in the sewer for treasuring. Allie is a pretty lady alligator and is the only female alligator to inhabit the city sewers. She used to be Cranky’s girlfriend – the alpha male and leader of the alligator clan. After Swampy gives her a purple bow, she starts to understand Swampy’s human quirks and starts to see him as charming and sweet, the opposite of macho and stubborn Cranky, and she sees Swampy as her boyfriend ever since. Finally, Cranky is the largest alligator in the sewer, he is always hungry, eating anything whatever he finds. As his name suggests, he is very cranky and always shown with an angry face. He is disgusted by Swampy’s quirks since they remind him of how humans live. He sabotages Swampy’s showers out of resentment and bullies him in other story moments. In additions, there are several other characters like Karl, Pushy and Shovey, other citizens of the sewer involved during play.

This time in “Where’s my water 2”, players will be taken to 3 new locations including: the Sewer, the Soap Factory, the Beach with many other new challengers. The unique gameplay of the first version is unchanged in “Where’s my water? 2”, there is no move limit, all you need to do is use your finger to cut through dirt, guide the fresh water, purple water, and steam to help Swampy and his alligators friends! While Swampy needs clean fresh water to take a shower, Allie needs steam to play her favourite instrument and Cranky needs poison purple water to clean algae away from his food. 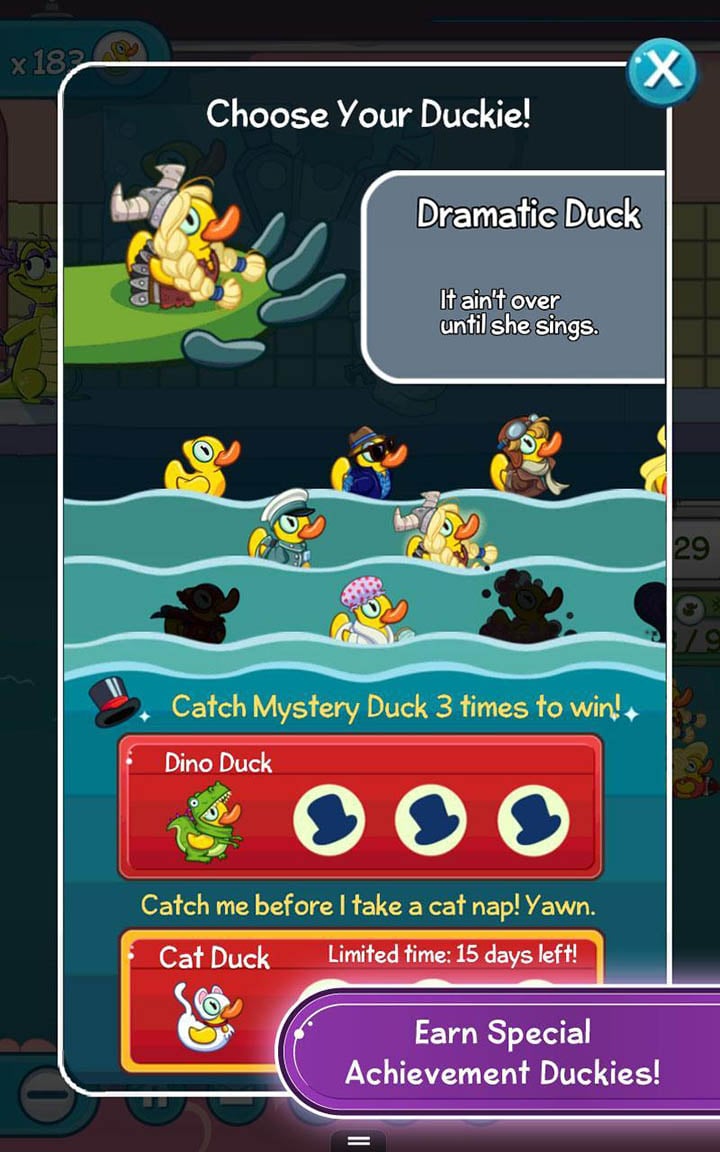 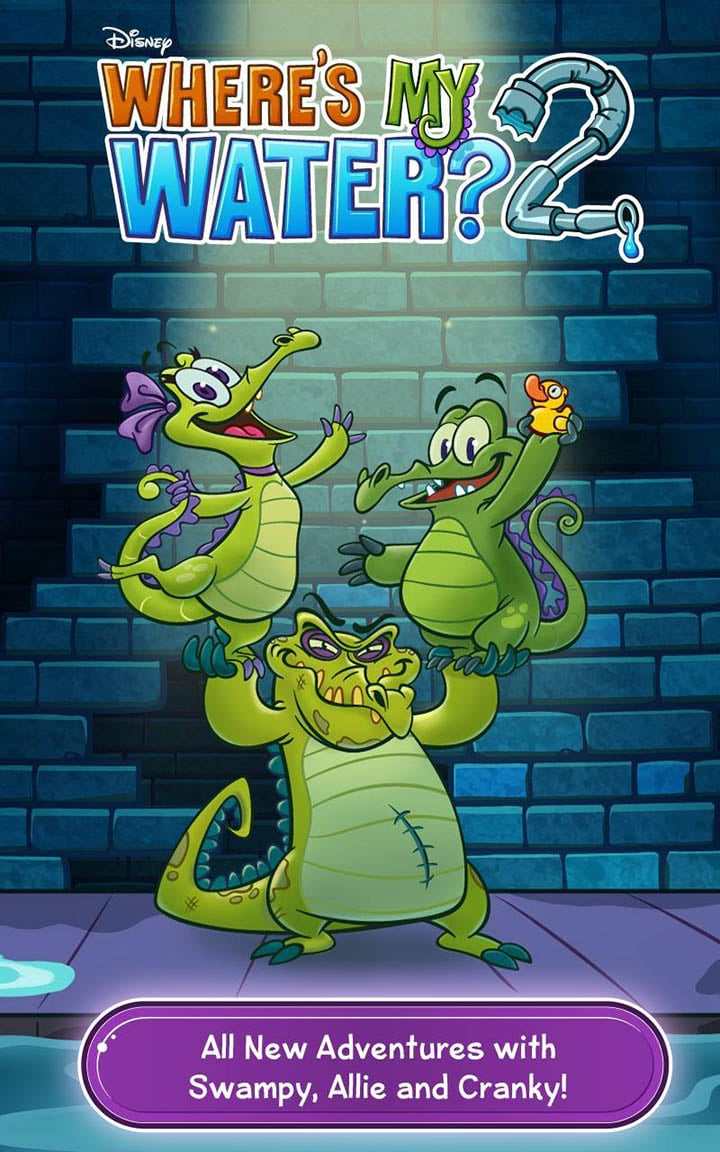 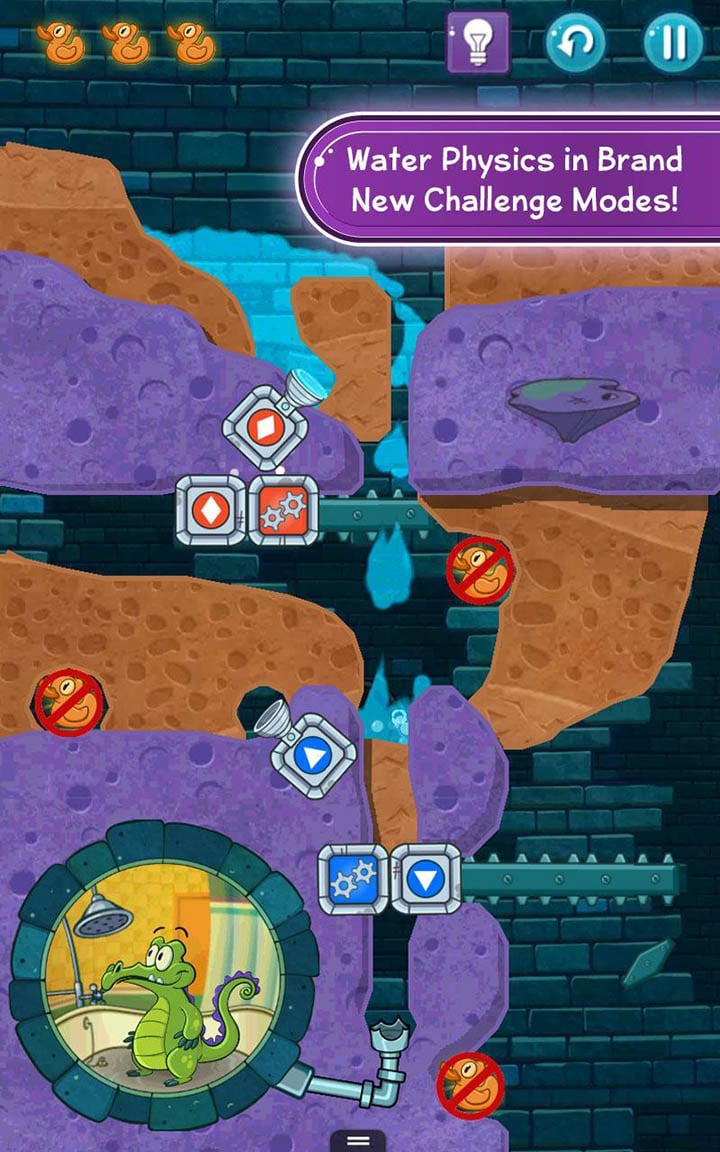 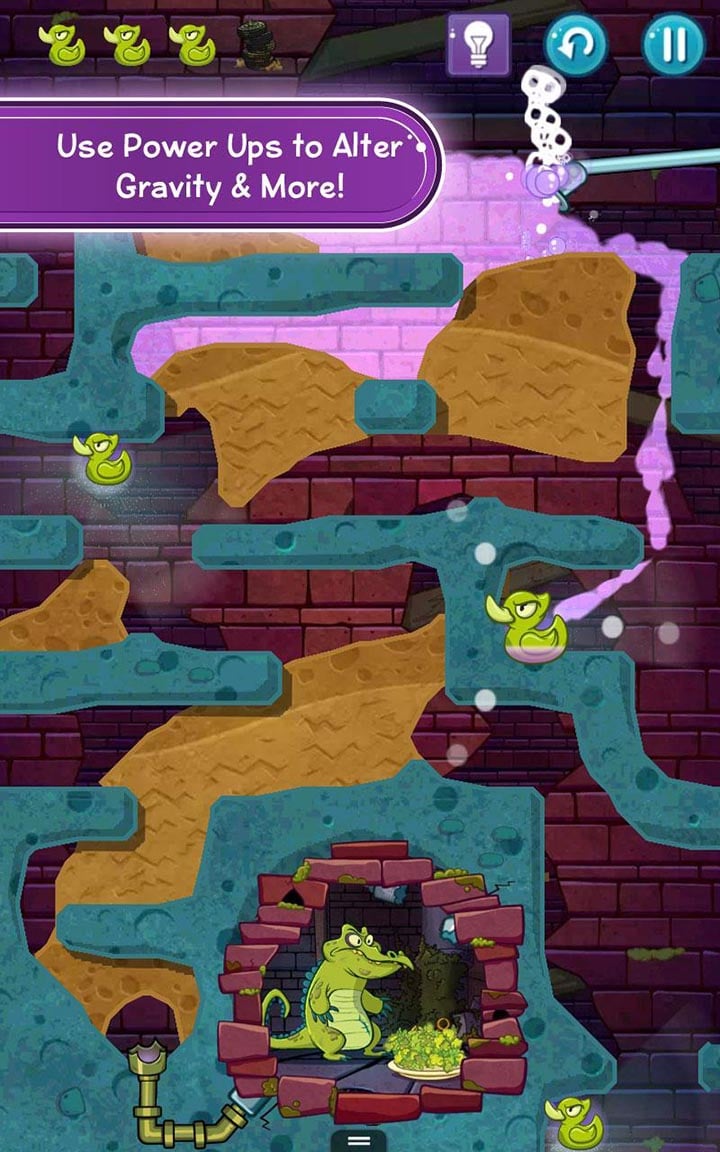 Besides regular gameplay guiding the water to Swampy’s tub or steam to Allie’s instrument, players also need to guide it through Rubber Duck to collect it for them. Rubber Duck is where almost all challenge modes of the game start from. Sometimes, players will need to guide the water upside down and collect rubber ducks eventually, sometimes they need to avoid touching the rubber ducks. There are also levels that they can cut through rock but must avoid switches and duck rush challenge is when you need to rush, keep water on the scrolling underground while collecting as much rubber duck as possible. Besides, another interesting feature is “Choose your Duckie” where you can change rubber ducks outfits. All you need to do is finish the challenge and collect three duckies of the same type to unlock the outfits. There is total of 34 different duckies that players can collect, they are all super cute designed outfits. In addition to the rubber ducks, players also need to collect interesting items such as Gnorber the gnome or Bingo the flamingo for Swampy’s treasure.

The game was designed for children above three years old and older. Therefore, the game is adorned with bright colors to bring a fresh, positive feeling to the players.

Besides positive feeling that the game brought, “Where’s my water 2” is also a puzzle game that requires and enhances player intelligence. It might seem easy to play but to complete all the tasks require some calculations and it could takes several tries before players can achieve it. All these calculations are extremely helpful to the growing of childrens in logical thinking. If your childrens like playing video games a lot, you could consider this game with all the benefits it might bring.

It is not just the game for children!

The game is not only good for childrens actually. It also benefits adults and even elders. While adults can release their stress with this simple but relaxing game. Elder who have signs of aging in mind, could play the game in their free time and because of calculations while playing will keep their mind lucid.

One more advantage of the game compare to its first version is that it is totally free to play. Unlike the first part of the game that requires approximately two dollars to download and play, “Where’s my water 2” is totally free to download and play. The only one thing players might concern is that sometimes advertising might pop up while playing. But that is just the way to support developers to continue with many other cool games!