1945 Air Force is a classic shooting game style shooter where you control a fighter bomber to destroy opponents on the ground and shoot down enemy aircraft in the air. OneSolf, developer of attractive games like Galaxy Attack: Alien Shooter or Metal Squad, has just released a new classic shooting game called 1945 Air Force. The game takes you to fierce air battles where you are single against enemy forces both on the ground and in the air in a fly shooting style.

With a simple concept and endless fun, the 1945 Air Force will let you re-enjoy the classic 90s shooter experience on your iOS device. 1945 Air Force is a remake of the classic arcade experience with simple control mechanisms. The game includes 16 types of famous fighters from World War 2 and many attractive game modes for you to explore. You can play games on any iOS device running iOS 9 or later.

The game comes with stunning visuals. Do you feel that aerial games and laser bullets are no longer attractive? So, playing the 1945 Air Force screen-reading shooter has never been so great. Experience the war in the sky full of excitement. Choose your fighter and free the country from invaders. The dogfight symphony and the hero’s charisma make for an unforgettable experience.

1945 Air Force is a unique dogfight game of the warfare genre. In the 1945 Air Force, players will have controlled their aircraft to destroy the enemy’s fleet to protect the territorial airspace. The more enemies you shoot down, the higher your score will be. Besides, do not forget to collect blood and fuel during combat. 1945 Air Force is a vertical plane shooting game with exquisite graphics. The game is about the bombing of Tokyo in 1945, creating a beautiful shooting game. The game has a very retro style. All kinds of aircraft from the War of Resistance against Japan are on the scene. Use your flexible operation to kill all the enemy bosses.

1945 Air Force is an arcade flying combat game with very classic gameplay. The STG entry elements are quite retro, but it has a more refined screen and gameplay system. Players can upgrade fighters, carry auxiliary aircraft, and have DIY matching skill effects and affect upgrades. A variety of different fighters have their characteristics, and the ability of the auxiliary aircraft is best to complement each other with your fighters. It is a very passionate retro STG arcade game. And it has very exciting innovations. Hurry and download the 1945 Air Force to start the experience.

The hottest airplane shooting game is coming now. The world is hanging on a thin thread. Our lovely earth is under attack by mysterious alien attackers. Huge bosses and evil enemies are saving our peace. We have no choice but to stand up and fight this merciless war.

1945 Air Force is a cool adventure-airplane shooting game with different tasks to complete. Are you bored with the familiar classic shooting game? 1945 Air Force brings you a brand new shooting experience, equipped with a variety of fighters and upgrade options. With various maps, countless characters, amazing battles, you will never be bored. Airplane wars are full of passion. Squadron attack, rocket army, or pilot makes this space shooting game highly addictive.

The touch screen can move the fighter plane up, down, left, and right. Upgrade the aircraft with coins, bullets, rockets, and aircraft types. Choose the cooperative multiplayer game mode and join the battle with the squadron. Are you ready for an epic war? Join our sky power and fly to the galaxy now. You will face the enemy and kill all to make your device boom with our endless shooting game.

This is a vertical shooting game with anti-war as the theme. A variety of levels are waiting for you to challenge. The powerful weapon upgrade system helps you to pass the levels smoothly. The game can exercise your hand-eye coordination and reaction ability, avoid enemy attacks, and use you to Destroy and bomb the enemy with the weapons. Come download and experience it! 1945 Air Force is a flying shooting game with the theme of World War II. They build the game with a 3D physics engine. The graphics are exquisite, real, and delicate with cool skills. There are a variety of weapons and models. The game is simple to operate and is fun and interesting. It can let players fully experience the game experience of flying shooting. Download it now and fire on the evil Japanese fascism.

The classic long-term shooting games that began in 1941, 1942, 1943, and 1944 have been perfected for smartphones. With its simple concept and endless fun, the 1945 Air Force can now be enjoyed again on your mobile device.

1945 Air Force is a masterpiece remake of the classic arcade experience. These controls are simple to learn and use, reminiscent of the exact feeling of playing in an arcade. There are 16 famous World War II fighter jets available for military fans to choose from. Compete in leaderboards and achievements. Support a variety of devices, including low-profile phones and tablets.

The game uses the Unity3D physics engine and precise and delicate art design and strives to restore the scene of the war. They base it on historical truths, and it creates original operation modes of contact control and release of freezing. You will experience a flexible release of kills, adding wingmen, swapping weapon levels, and attack skills. Cultivate players’ combat strategies and tactical qualities, and eliminate enemy aircraft, tanks, and poisonous gas factories. 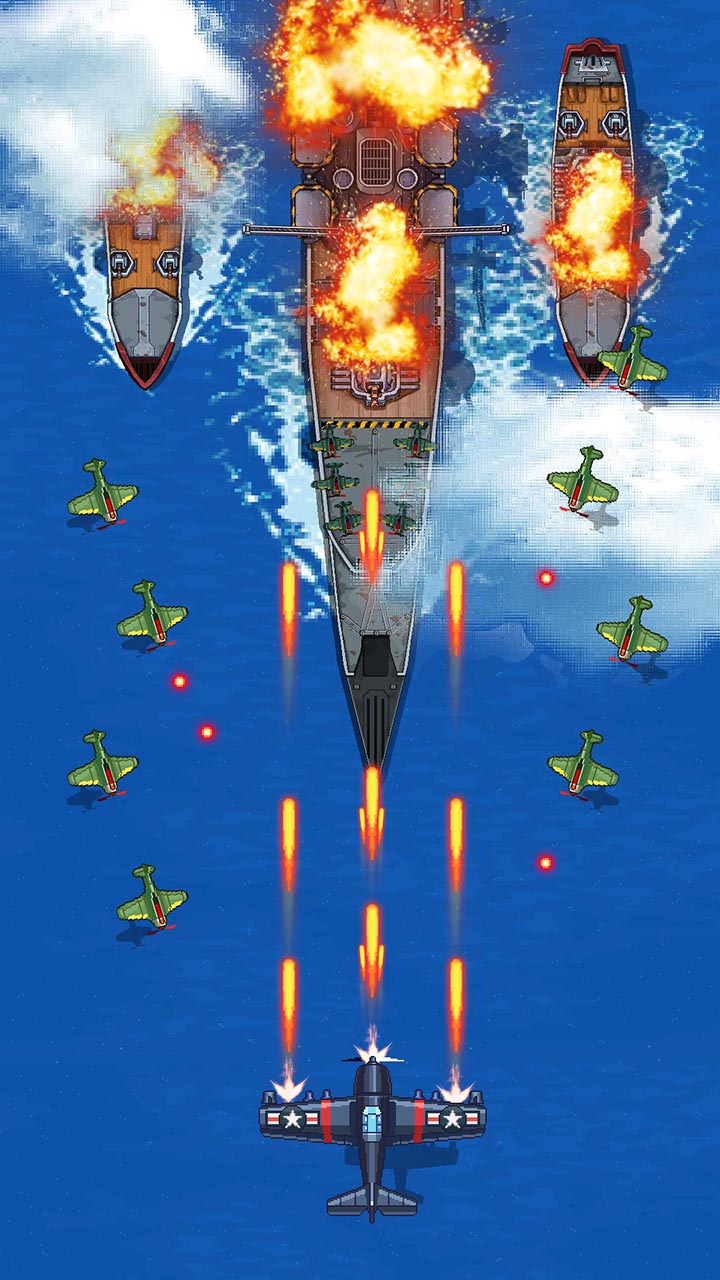 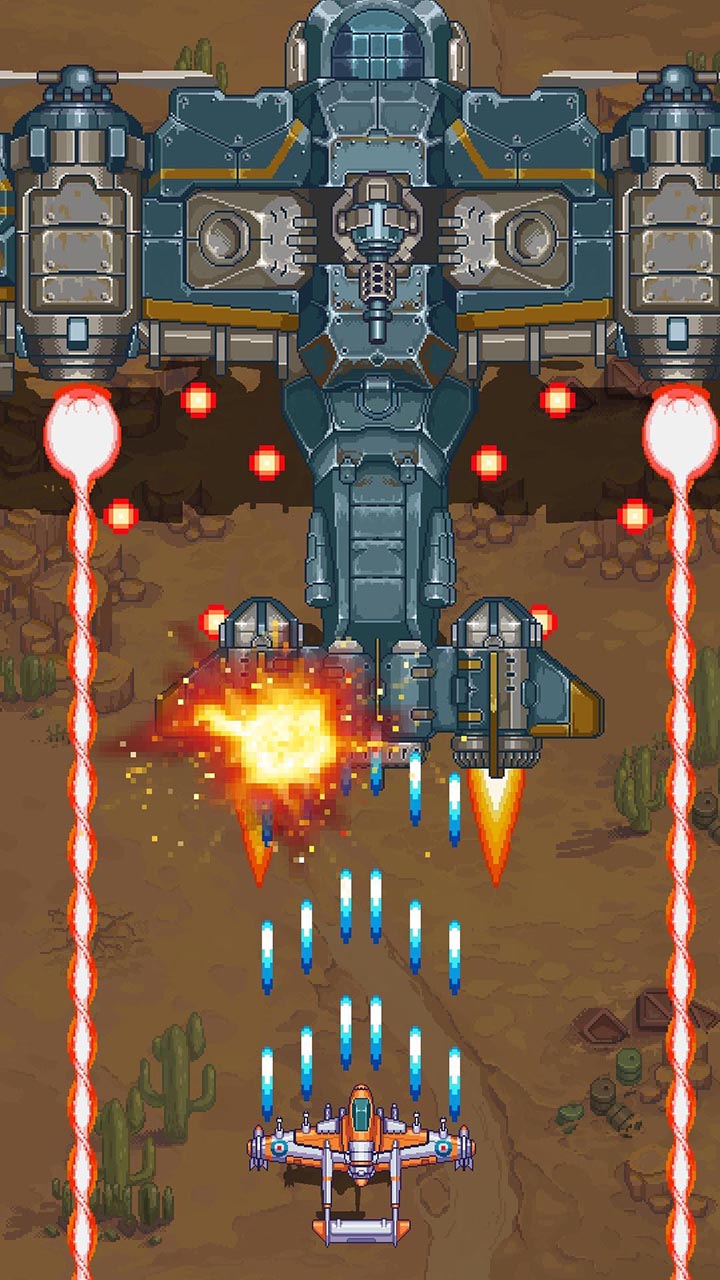 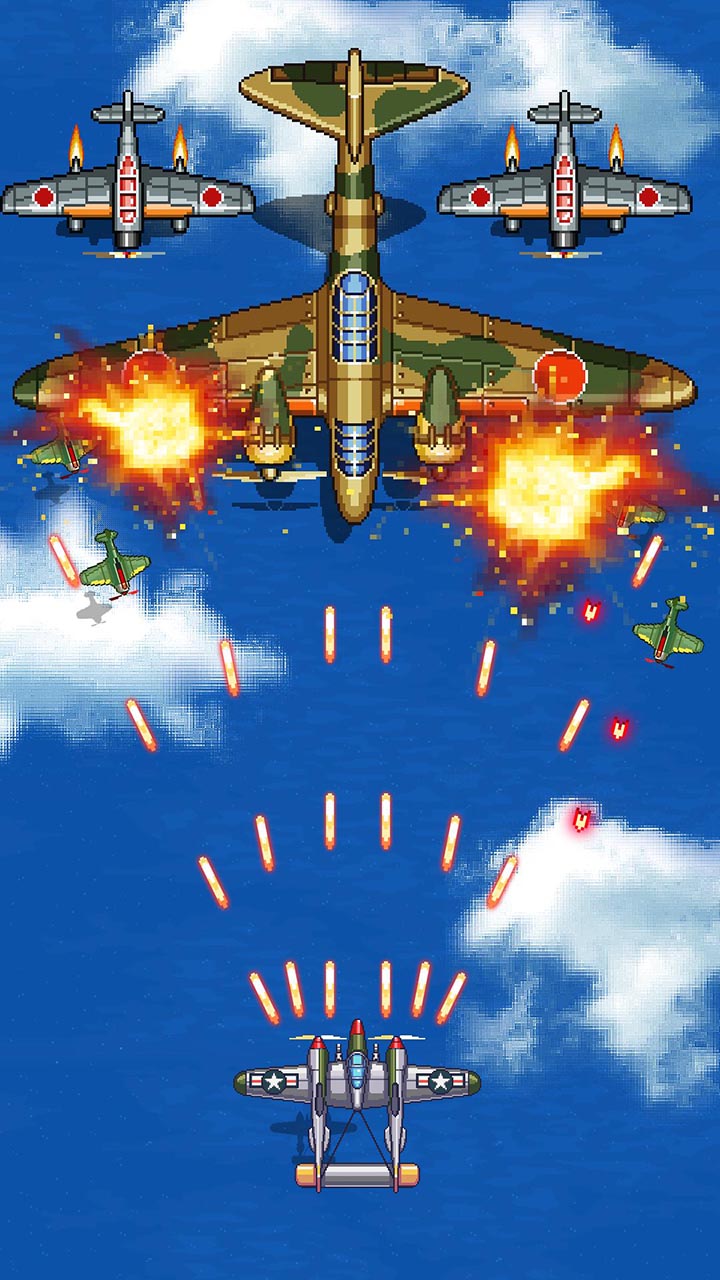 Galaxy Attack: Alien Shooter is a very attractive fighter-themed shooting game. The last hope of the earth is in your hands. Drive the spaceship alone, defend against the crowds of aliens, and defend the earth. Your goal is extremely challenging because you must save the universe from evil enemies. In this game, face more and more enemies in a dangerous environment. During the game, you can win the opportunity to upgrade the spaceship to release its full lethality.

In the distant future, humanity has expanded and prospered in the galaxy. One day, mysterious alien forces from different dimensions appeared and attacked the border planets. The struggle for human survival has begun. As an experienced pilot, they call you to defend the galaxy from invaders.

Galaxy Attack: Alien Shooter combines the feel of a classic shooting game with modern mechanics. It features all kinds of enemies: from ordinary soldiers and waivers to powerful elites and huge bosses. Everyone has different appearances and behaviors. There are difficulties when encountering unique challenges on the road. Constantly update new content, upgrade, and develop your spaceship to a new form and gain new power.

There is an extensive collection of spaceships, each with unique skills and game styles. As an extended version of Galaxy Attack: Alien Shooter, this version has a better graphic design. We also changed some things in the core game mechanics, such as weapon skills, item skills, ship parts, and evolution types.

Through various types of spacecraft, you can build a powerful air force and join the galaxy war. The old-style shooting game is now modernized with a fantasy theme. We continue to use retro shooting game mechanics such as waves, bullet hell boss but added more interesting content. You can see the feeling like Galaxy Attack: Alien Shooter, as another retro shooting game.

The 1945 Air Force is an Android vertical version of a flying shooting game. Fly a World War II plane and destroy all enemies on the screen. The game has over 80 actual models and buildings of World War II weapons. Players can choose six aircraft, three-game tough challenges, four control modes, and challenging boss missions. It is a perfect choice for thousands of players who enjoy flying shooting. Do not miss it.