The description of Almost a Hero MOD APK 5.3.2 (Free shopping) Finally, Android gamers will have their chances to enjoy the simple yet extremely addictive experiences in this idle RPG gameplay from Bee Squares Games. Explore and enjoy the unique in-game mechanics with the exciting RPG battles with endless enemies and awesome combats. Play alongside your hero warriors as you assist them in defeating their enemies with amazing gameplay.

Advance through a series of exciting levels and embark on your amazing adventures in Almost a Hero. Have fun with the unique combats which combine both the idle clicker gameplay with exciting RPG elements. Fight against bandits, monsters, and giant bosses as you take down your endless enemies in this awesome RPG title.

Find out more about this amazing game from Bee Square Games with our reviews.

In the game, Android gamers will find themselves in a kingdom in turmoil with bandits and criminals roaming the lands. Here, you are tasked with the ultimate quest to defeat the bandits and bring peace to the people. And to do that, you’ll be granted the ultimate power with the lightning ring. Make uses of the ring’s powers as you explore the vast lands of Almost a Hero. Takedown enemies as you unleash the endless thunder strikes by constantly tapping on the screens. Unlock the powerful blast of lightning to wipe off all approaching enemies.

And at the same time, as you embark on your righteous journeys, powerful heroes and warriors will start to join your causes. Recruit them as you join forces in epic RPG battles against the incoming enemies. Fight hard to defeat your enemies and collect the precious gold coins. Make uses of your collected money to power up the in-game characters, along with your lightning ring, gamers can have their crews ready for the upcoming challenges. 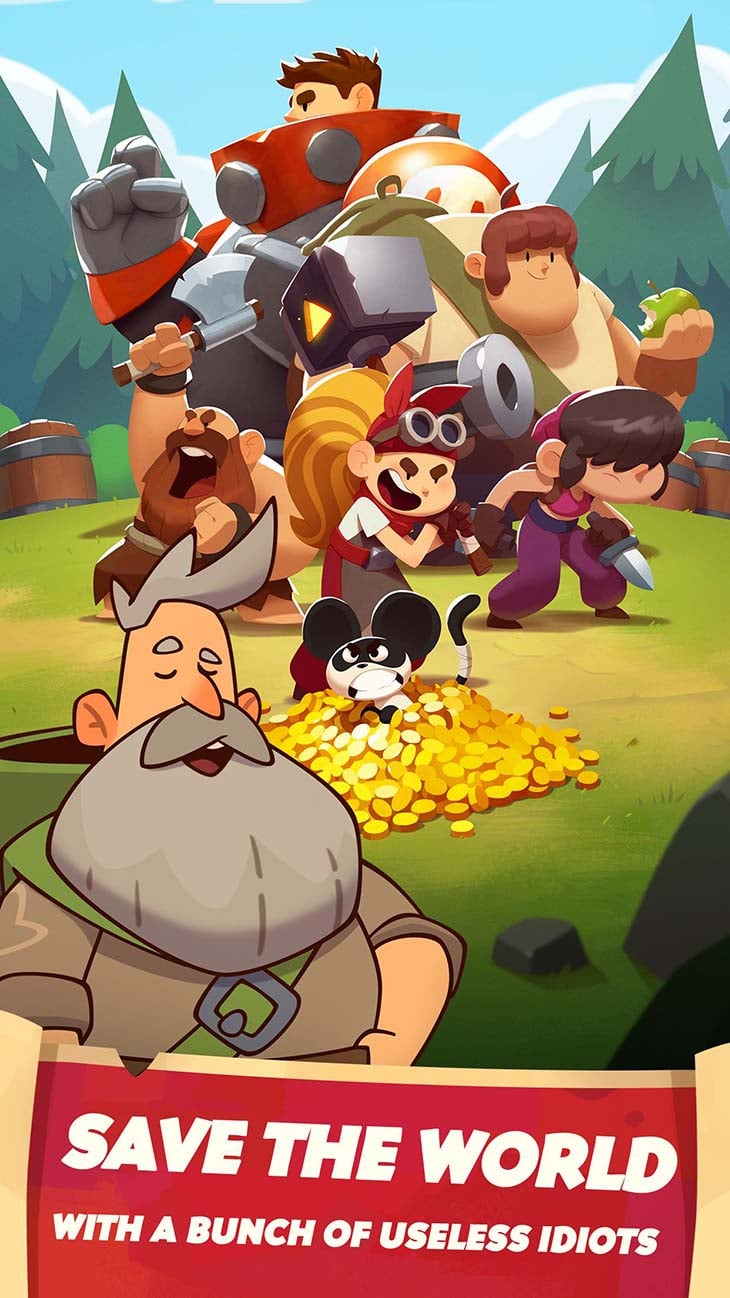 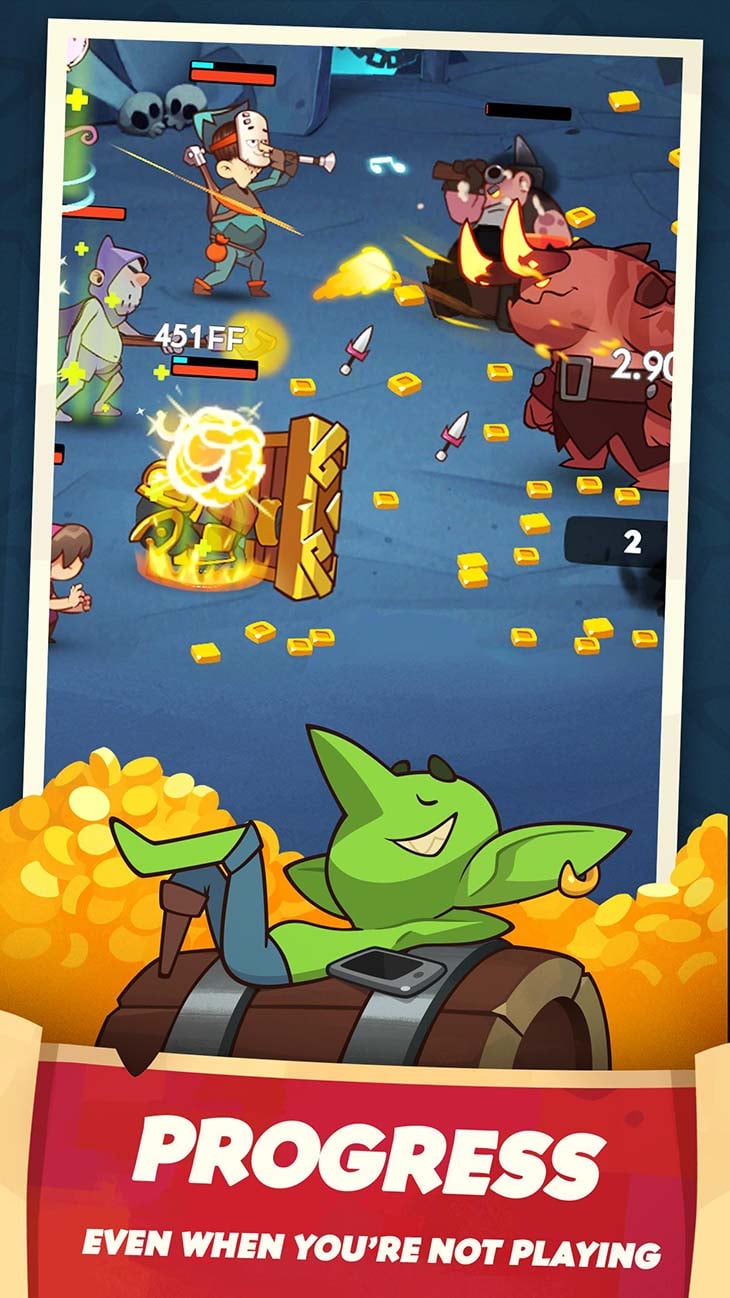 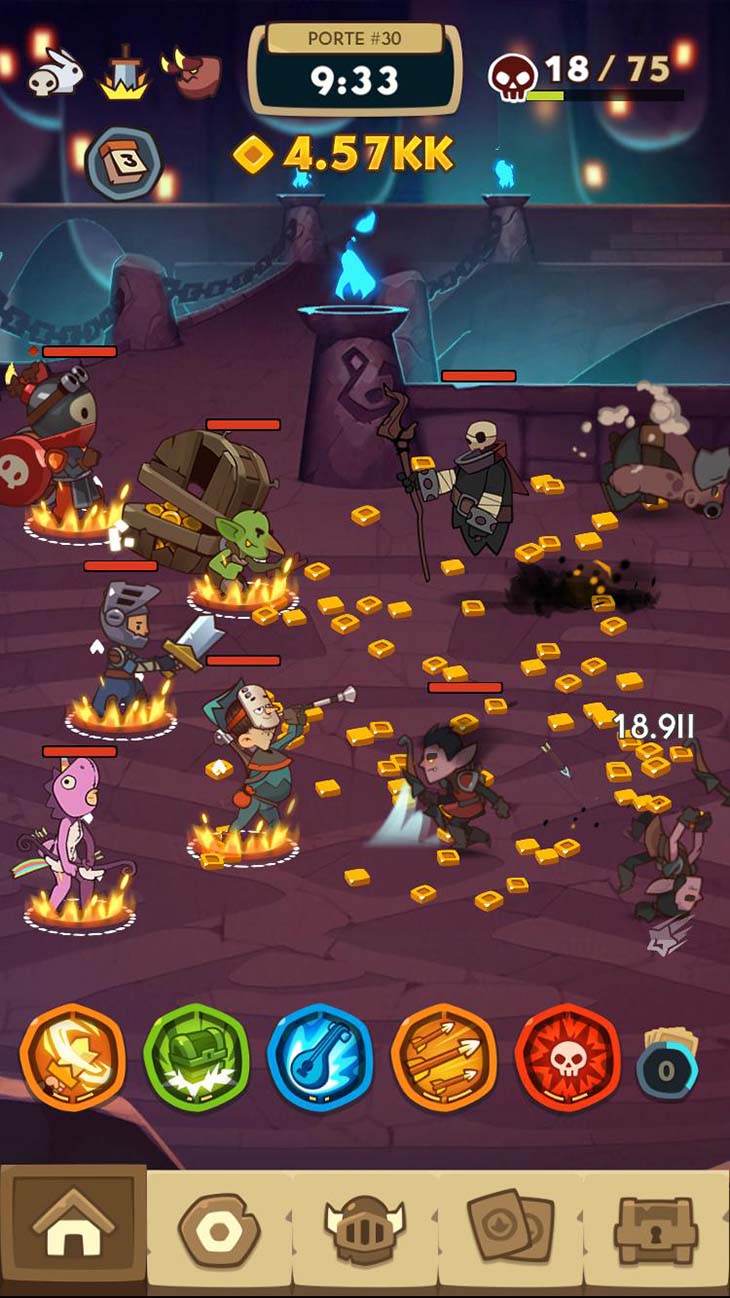 To start with, Android gamers in Almost a Hero will find themselves having access to the simple yet extremely addictive gameplay of idle RPG in their newest mobile gaming experiences. That’s said, the game introduces gamers to the world of monsters and bandits, which you can easily eliminate with your powerful taps of lightning.

Feel free to make uses of the powers of the ring and unleash unlimited blast to your enemies. Take them down with your speedy attacks and recruit heroes to assist you in your idle RPG adventures. That being said, the game allows Android gamers to enjoy their progress even without them playing the game. Here, the warriors and heroes can do the fighting job for you while you focus on managing the team composition as well as powering up your characters.

Enjoy the adventures in many exciting game modes

In addition, for those of you who’re interested, it’s also possible for you to enjoy the awesome in-game adventures with many exciting game modes.

A variety of different heroes with amazing powers

For those of you who’re interested, Almost a Hero also features many amazing heroes that you can field into your ultimate squad of the strongest warriors in the entire realm. Make uses of their unique abilities to effectively defeat your enemies. Combine all of their amazing powers as you advance through the awesome challenges in Almost a Hero. Create your ultimate team compositions with a wide range of epic powers. 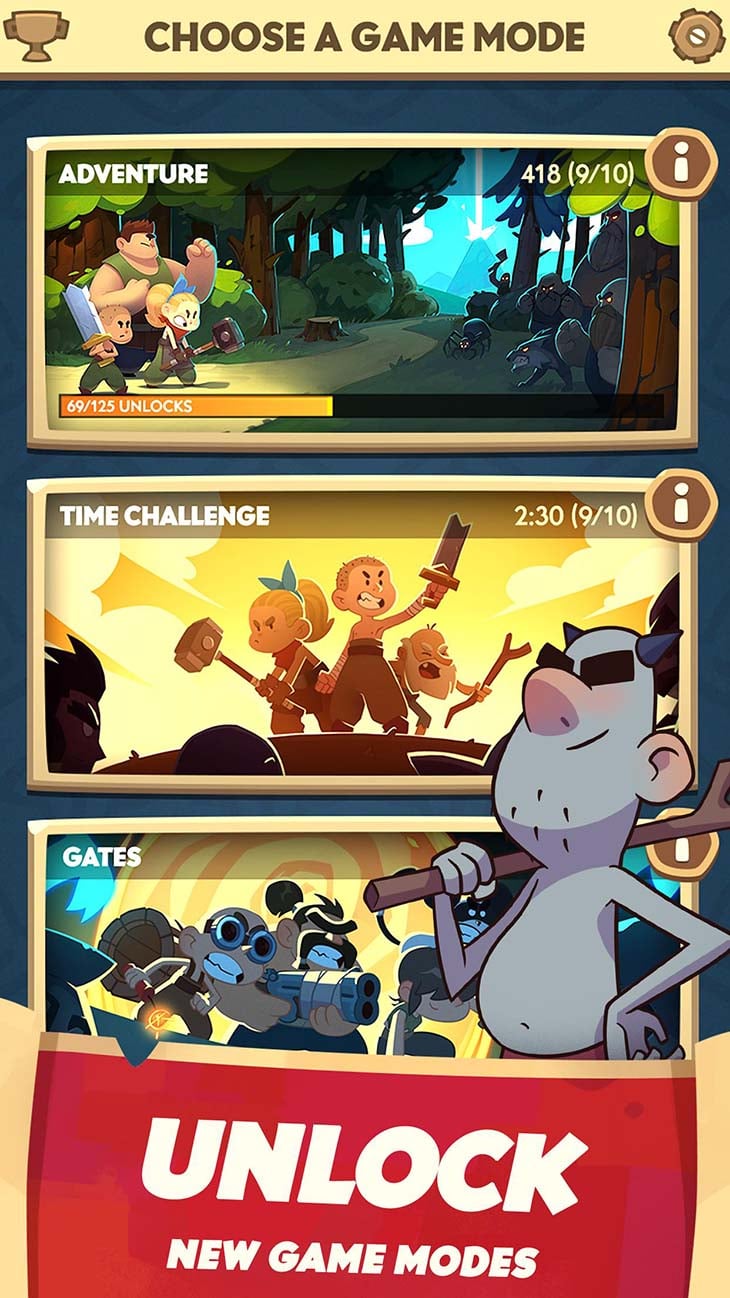 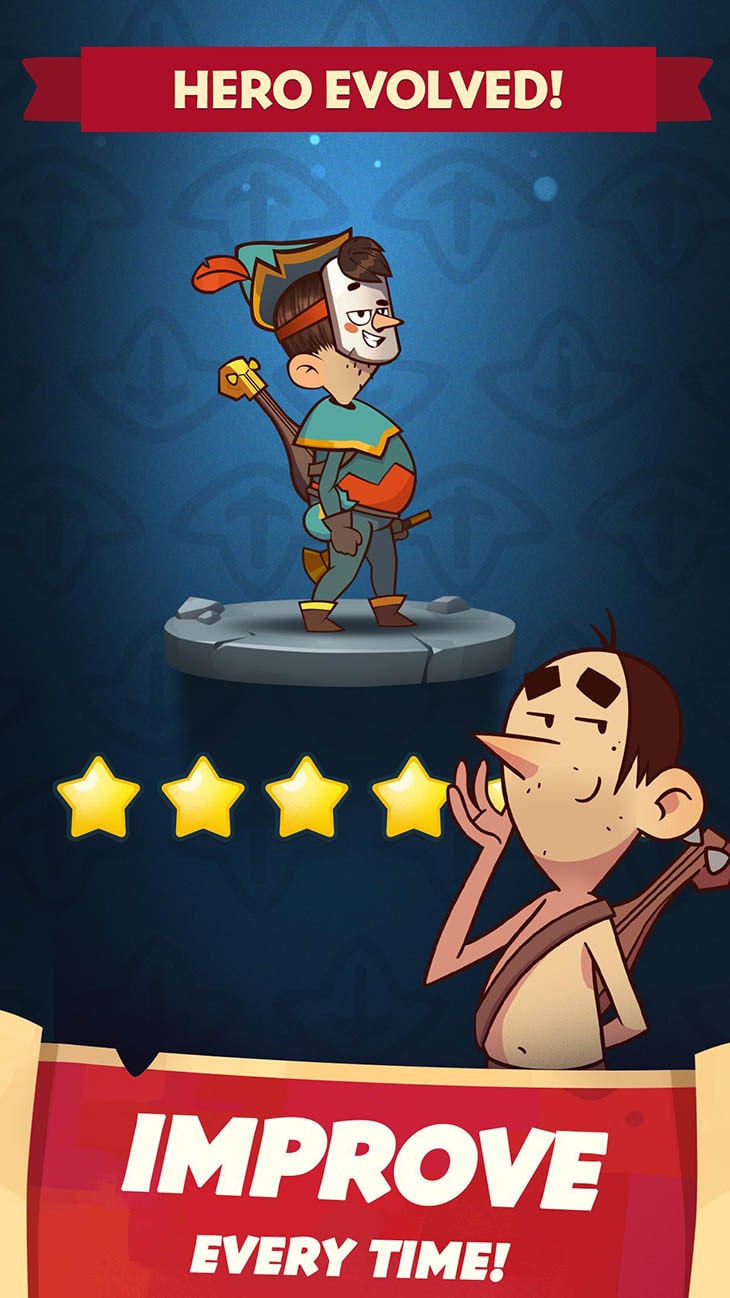 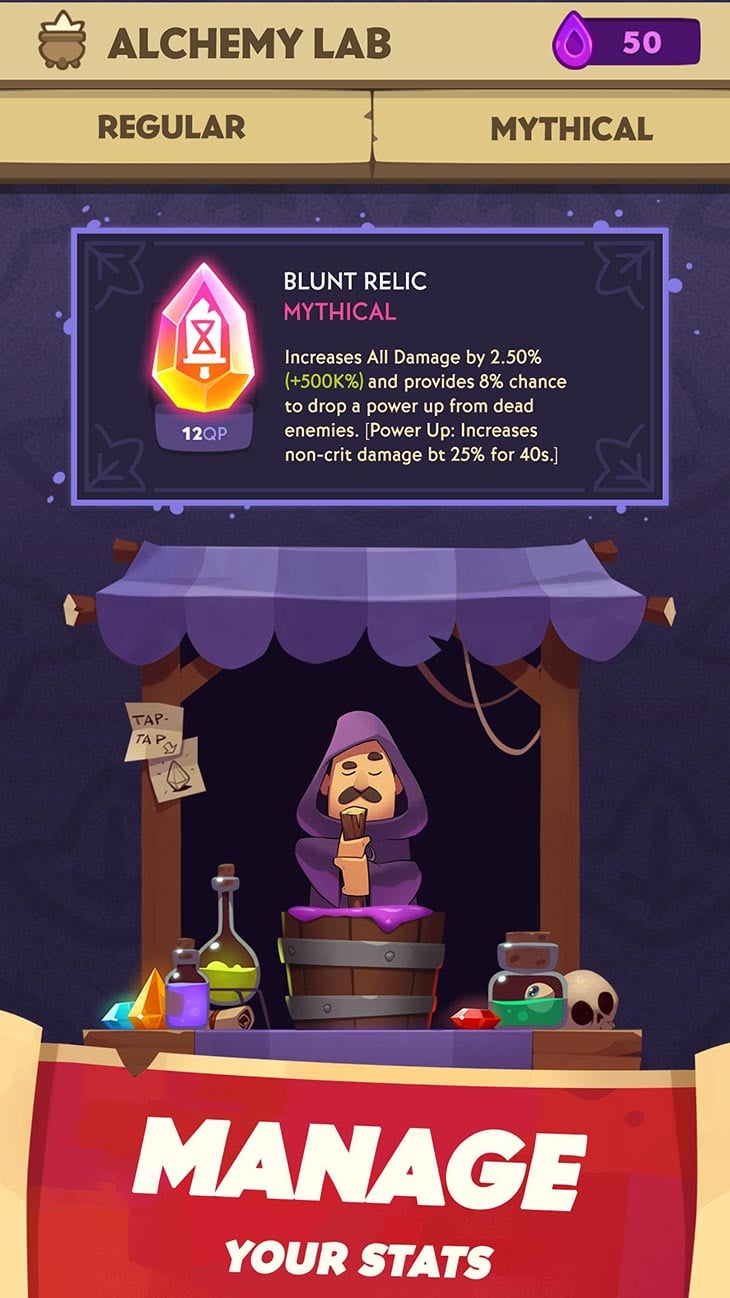 More and more challenging enemies as you progress

In addition, as you progress in the game, gamers in Almost a Hero will also find themselves being challenged by more and more intimidating enemies. That’s said, with escalating difficulties and tougher enemies, the game will enable new approaches and tactics for you to experience. Enjoy the exciting gameplay of Almost a Hero as you explore the awesome in-game experiences.

Unlock awesome abilities and spells with the rings

On top of that, for those of you who’re interested, you can also find yourself enjoying the awesome in-game abilities and epic spells with your powerful rings. Tap on the screen endlessly to unleash your zapping attacks. And at the same time, build up the energies for your final thunder strikes, or deliver powerful skill attacks with many available abilities with the rings.

Multiple upgrades to power-up your team

As you embark on your journey and progress through the exciting levels, you’ll also find yourself being challenged by more and more intimidating opponents. This requires you to step up your game by achieving new powers from your heroes and the ring. Start by level up your heroes to increase their stats, evolve them to unlock better abilities, and upgrade their existing spells to make them more powerful. As for the ring, you can increase its damages, make more effective trikes, and unlock many unique abilities with the available in-game upgrades and power-ups.

Awesome artifacts and items to equip

And along with the available upgrades, the game also features multiple artifacts and items that you can equip on your heroes, which would make them a lot more capable against their enemies. Feel free to put on the pieces of armor, enhancement ruins, and all kinds of exotic items as you help your heroes achieving their ultimate powers.

To allow gamers to enjoy the absolute portable gaming experiences, gamers in Almost a Hero are also allowed to have fun with the completely offline gameplay without having to connect to the Internet. That’s said, it’s still possible for you to access all of its available features whenever you’re outside and don’t want to waste your mobile data.

And for those of you who’re interested, you can also have the game ready on your mobile devices without having to pay anything. That being said, Almost a Hero is currently available for free on the Google Play Store. Feel free to have the game installed on your Android devices whenever you’re ready.

Plus, for those of you who’re finding the in-game purchases and ads a little annoying, it’s also possible for you to go for our modified version of the game. With this, you can enjoy completely unlocked gameplay, ad-free experiences, and unlimited money so that you can do whatever you like. And all you need to do is to download and install the Almost a Hero Mod APK on our website. Follow the provided instructions and you’ll be good to go.

Get ready for your ultimate idle RPG experiences as you dive into the awesome battles in Almost a Hero. Enjoy a wide range of different skill effects, awesome animations, and intuitive designs as you fully immerse into the experiences. Take on multiple in-game challenges and find yourself dealing with dozens of epic enemies in stunning visual experiences. Plus, with undemanding graphics, the game will offer smooth and satisfying experiences to all of you who’re interested in its gameplay.

Together with powerful in-game audio, Android gamers in Almost a Hero will undoubtedly enjoy themselves with the awesome gameplay. That’s said, you can find yourself exploring the incredible world of Almost a Hero and enjoy its immersive battles with powerful soundtracks and amazing sound effects.

For those of you who’re interested in the unique idle RPG gameplay of Clicker Heroes and Nonstop Knight 2, Almost a Hero will offers exciting in-game experiences that most of you would find enjoyable. That being said, the game also features in-depth gameplay, many exciting game modes, and unique RPG elements that would hook you to its entire experiences.

Plus, with the game being completely free and unlocked on our website, there is no way that you could overlook this awesome mobile title.