The description of Castle Clash APK 1.9.6 Hello, all my lovely friends. Welcome back! Have you ever tried to imagine yourself as the commander of a mighty army? Have you ever had a headache thinking of special tactics to counter an onslaught of enemies? If you are a person who loves strategy games, Castle Clash is a superb choice for you.

Ever since I experienced this game, it has fascinated me. It brings together all the factors that can make players enjoy beautiful graphics, creative gameplay, interactive events. If you feel interested, let me learn about Castle Clash!

As far as I know, Castle Clash is a strategy game that has been released by I Got Games (IGG) – a highly appreciated browser and mobile game maker in the US on mobile devices using the operating system. Android and iOS operating systems. Castle Clash was the top 10 best-selling mobile game in the US in 2013, voted by a reputable game industry magazine. Considered being quite similar to Clash of Clans, this strategy game doubles the impressive construction management style.

Castle Clash has the potential to make a gamer addictive quickly after only a short period of experience. This is probably understandable because a functional and attractive strategy game format will lead players to penetrate the game right from the tight plot details and how to show the simple gameplay, Castle Clash has done it. There.

Castle Clash is an MMORTS game that combines tower defense elements and explores the world, set in the Nordic mythological world. The task of the player in the game is to develop bases, raise troops, build a structure of buildings to combat enemy attacks.

The game possesses a diverse array of heroes with many abilities and fighting styles. Based on the research of the strengths of armies such as Fighter, Ranged, Mounted, Mage to come up with creative and effective strategies before the challenges you face. In addition, players can also use powerful magic to turn the situation around and gain the upper hand in combat.

Besides the Clash of Clans, Haypi Kingdom, Clash Royale, Castle Clash is also a veteran name in the good and free empire game series on many platforms. Designed harmoniously with the elements of image, sound, gameplay, and content and the number of players, Castle Clash easily attracts hardcore gamers around the world.

Castle Clash opens up a vast arena with fast-paced tactical battles and many factions confronting. Through individual fighting or alliances, players will lead their army to become the world’s leading empire.

Regarding the plot, Castle Clash is staged in an epic style, with fierce battles and fast-paced battles. Players will manage a powerful army and build their land right from the beginning or possess elite soldiers with melee armor, healing, support, or perfect magic ability.

In Castle Clash, you must defend and develop your base. In addition, you must regularly raise your army and set up your buildings to resist attacks. Basically, the game supports the system of construction, and upgrading is quite complete.

The combat system takes place in reality with fast and thrilling speed. The strategy also takes place closely with the recruiting, together with training some elite troops to fight. To make it easier for you to visualize, here are some archers and assassins. The troop classes are leaning towards power and, ultimately, magic to defend or fight giant bosses in order to gain more resources. Besides, you can dispel troops to other players’ houses to invade their residence. Unique features are the essential elements of a game. This is because it determines whether the game is attractive enough to the player or not? Naturally, every game has its own exciting points, so does Castle Clash. After experiencing this game for a while, I have found some addictive features.

The combat system takes place in reality with fast speed and thrilling with strict strategy. Features close interaction and so players can ally with their friends or challenge potential rivals. The game has a comprehensive system divided into three levels: Ordinary, Elite, and Legend. Champions have a diverse skill system and are revived after each death. You can upgrade, train generals, so they become legendary heroes.

The easiest tip for you to win is to focus on recruiting several top generals in combination with training some elite military classes to fight, such as archers, assassins, military classes that lean toward strength, and last. The same is magic.

Building a strong fort is a top mission

With the characteristics of a castle player, Castle Clash gamers must keep their stronghold by all means. The construction and protection of Castle Clash castle is also the clearest strategy and tactical thinking of Castle Clash players. 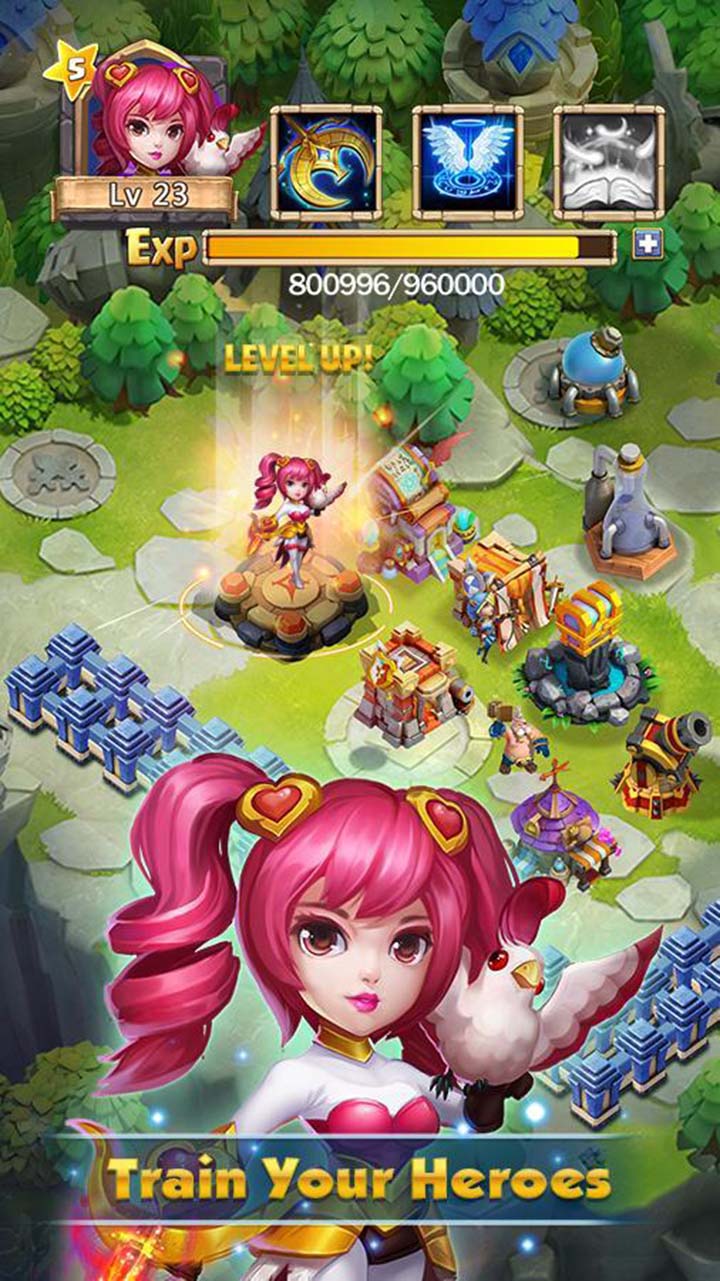 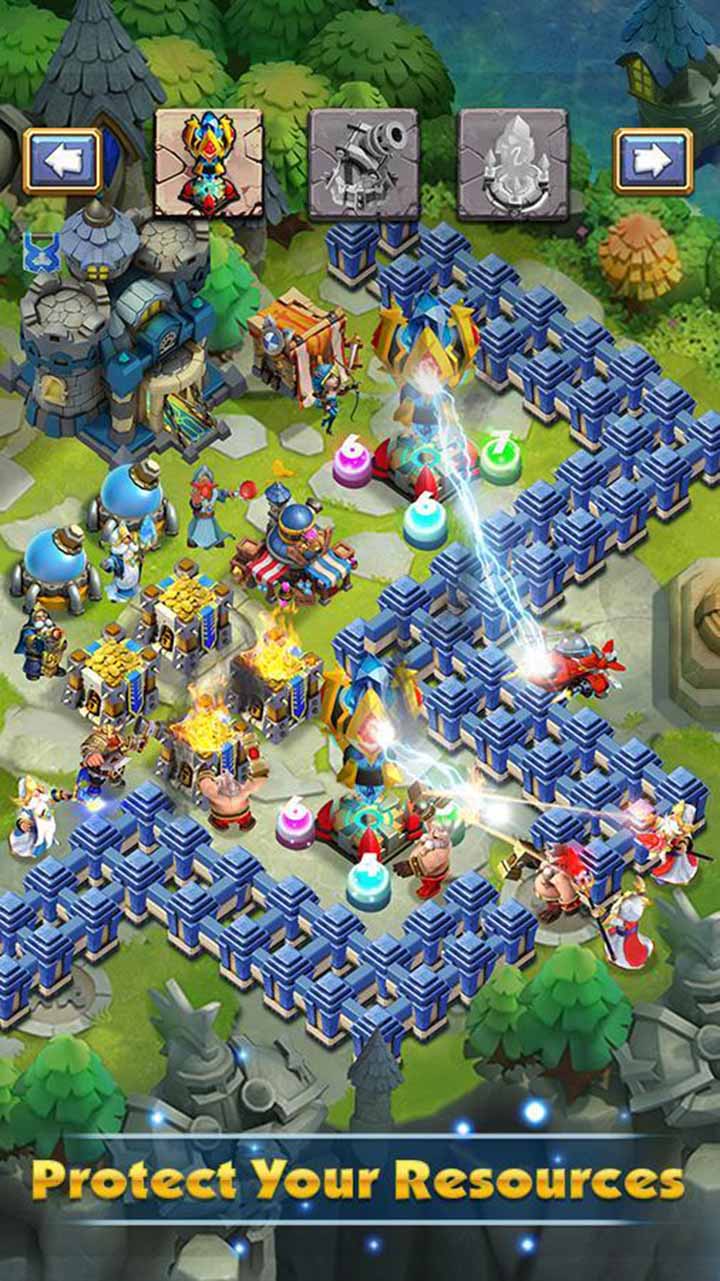 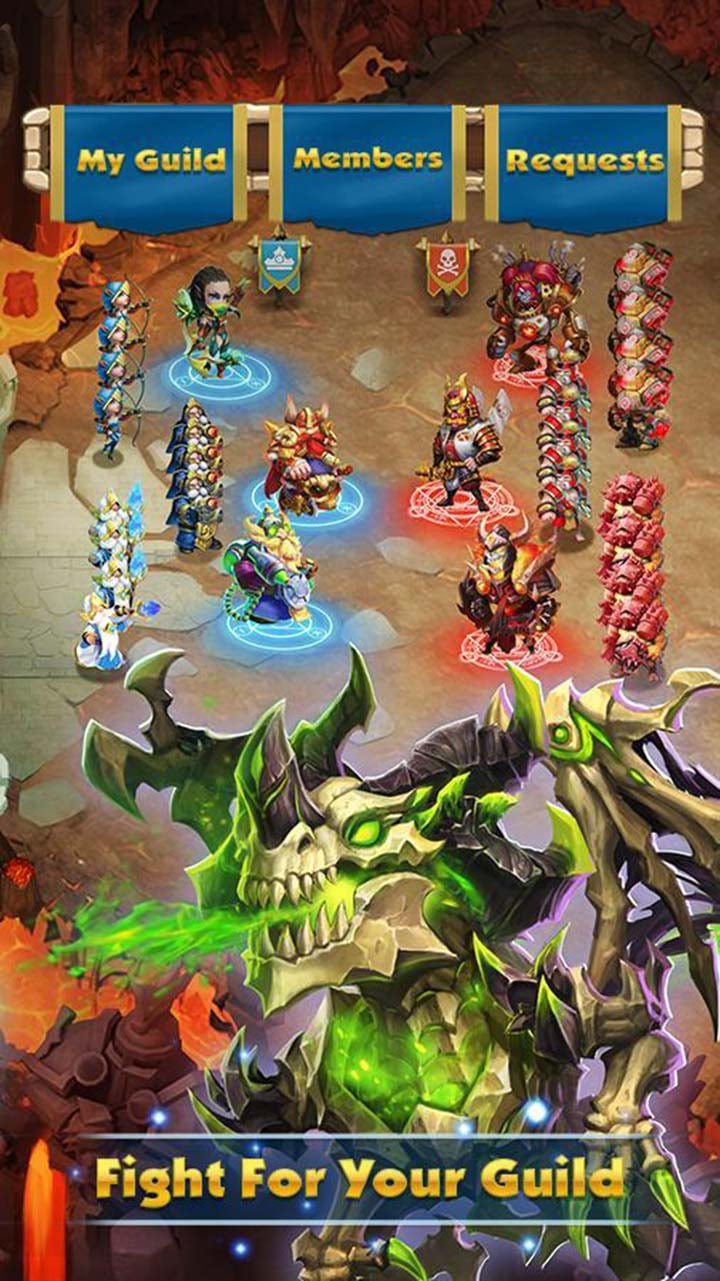 Create the Strongest Army with The Right Generals

In the Castle Clash game, gamers must be fantastic leaders when you command an army to fight. Not having to assemble any of the groups you have to promote strength, there must be a secure fit among the champions you can win.

Receive support from your pet

Although a role-playing game and tactical squad combat, Castle Clash unexpectedly functions and is strengthened by pets. Now, when fighting with other troops besides the strength of the general, there is the support of pet power in Castle Clash.

Communicate with Friends from Around the World

Strategy game requires the cooperation of many other players, so the exchange and discussion are indispensable. Play Castle Clash game, you have the opportunity to interact with a lot of passionate gamers around the world.

Download Castle Clash game for Android gamers to experience a variety of game modes with attractive Co-op properties. Players can join in fighting and completing quests in Castle Clash. They can also compete against each other through PvP matches.

Besides, Castle Clash also has the key features that players will experience.

Game genre construction but not cumbersome, mostly home upgrading. There are two types of resources, Mana and Gold, and you will have to use these two resources properly. Overall, Castle Clash is rated quite well in terms of graphics, beautiful and smooth game images, quite compelling storyline.

For the basic features, the game helps the transportation system to build and upgrade quite wholly. The anti-traffic system is implemented in reality with fast and thrilling speed. The strategy part was also tight and staged under a Free to play motif. The feature is close, and therefore players have the opportunity to ally with their friends or challenge potential enemies.

In my opinion, Castle Clash is excellent and easy to play. The most straightforward trick for you to win is to focus on recruiting some top generals combined with training some elite military classes to fight as well. Assassins, troop classes are leaning on the strength and are ultimately magic.

How to Get Free Gems in Castle Clash?

At the primary interface of the game Castle Clash, click the arrow icon in the screen’s corner (next to the Shopping system) to enter the Achievement interface.

There are many Achievement quests that you can perform, choosing to suit your ability at the present time to complete and receive the free Castle Clash game.

Received from The Sword Event

Get Free Gems from The Rank

In the Castle Clash game, the Stripping point is shown instead of the character’s Power of War; the higher the Title the Pearl gets, the more the combat skills of the champion are increased. To access the Title box, just click the hand icon in the top left corner => click the gift box => get a free Castle Clash game every day from the current Title.

The Mission Table is located on the upper-left edge of the territory map when the Main House reaches level 7; you can proceed to edit the Mission Table to complete receiving free Castle Clash Pearls, the quest system at This is refreshed every day.

Monthly or weekly events for free Castle Clash game Jade is usually held on Facebook, Group, and Castle Clash game community. Please stay tuned and take part in events to have the opportunity to own more attractive rewards.

There are some tips to earn Jade Castle Clash game for free you need to know if you do not want to load but still have pearls to use. Be smart in using Ngoc to recruit generals, buy more workers, speed up the construction, buy resources, and many other things reasonably.

Some Generals in Castle Clash

Level 1: Strengthen the defense. Receiving Damage is reduced by 40% for 5 seconds.

Level 9: Consolidate defenses. Receiving Damage is reduced by 90% for 5 seconds.

Level 1: Deals 100% damage to 3 random nearby targets, stunning for 3 seconds.

Level 9: Deals 310% damage to 3 nearby random targets, stunning for 3 seconds

Level 1: Lightning 1 random target, dealing 200% Damage, and stunning all nearby enemies for 1.5 seconds.

Level 9: Lightning 1 random target, dealing 440% Damage, and stunning all nearby enemies for 1.5 seconds.

Level 1: Cover Pharaon with a sandstorm for 6 seconds. Inflicts 120% Damage and Stun all enemies within a sandstorm.

Level 9: Wraps Pharaon with a sandstorm for 6 seconds. Inflicts 280% Damage and Stun for 1 second to all enemies within sandstorm.

Level 1: Deals 250% damage to targets with the lowest health level.

Level 9: Deals 510% damage to targets with the lowest health.

Recently, IGG has released an update of this hit game. Many features have been added to make the role-playing Castle Clash even more powerful. Interesting, isn’t it? What are you waiting to experience this strategy game now!