Farm Heroes Saga is a product in the famous match-three game by the publisher King. In Farm Heroes Saga, the player’s task is to move and pair farm produce together according to the required number of each game screen. Through the screens, you will rescue animals and your farm with hundreds of unique and intellectual levels.

Join Farm Heroes Saga, players will step into a large farm with a variety of agricultural products. The agricultural products are all under a funny form when they are no longer inanimate objects, but faces and movements. It will assign you the responsibility of preventing attackers from destroying fertile and valuable breeding lands.

Farm Heroes Saga immerses players in hundreds of levels with delicious strawberries, fertile carrots. In the beginning, it will give each player five hearts equivalent to five lives. If we lose our goal, we will lose a heart. Otherwise, it will take all five minutes to get another heart if the player loses all five hearts. The first trick is to join three cells of the same type together. If you are familiar with the gameplay of the cross-linking genre, it is impossible to ignore the tasks that must be performed at each level.

Farm Heroes Saga is a game with simple gameplay. It is easy to play but difficult to win, especially at high levels and marked difficulty levels. Players also get to experience some additional exclusive tables every two weeks. Besides, there is the integration of rankings to compete with friends and gamers around the world. You can also sync Farm Heroes Saga on your mobile devices and unlock full features when connected to the network.

If you have ever loved Candy Crush Soda Saga, you cannot take your eyes off Farm Heroes Saga, a King’s farm hero game. Through the diamond-shaped puzzle screen, players must rescue animals and their farms through hundreds of unique, intellectual levels.

Compared to the mobile version, Farm Heroes Saga in BlueStacks has a larger screen, stable connection, and easier play. The mischievous cats will destroy the farm, rob the crops, and run away. Players will accompany the farm hero to collect crops and rescue unknown lands. Conquer hundreds of levels in the style of a match-three diamond matching game in Farm Heroes Saga.

How to Play Farm Heroes Saga?

To complete collecting agricultural products, you need to identify the fruits of the same type when swapping positions as we can line them up in a row. With a few simple taps, touch and reposition the left, right, top, and bottom areas. In each successful arrangement, you harvest that fruit with the corresponding quantity. If you put them in four or five in the same row, it creates a supernatural effect, helping you to get more fruits.

Especially, when you arrange five fruits of the same type in a row, an effect will explode, capable of harvesting all the corresponding fruit in the vicinity. Besides, there are also support spells in the bottom corner of the screen that will be a tool to help you pass the levels more easily.

In this game, there will be a pet appearing. You can choose one of them to accompany and support you on difficult levels. Each animal has its features and players need to choose the right animal to help themselves at different levels.

The impression in this game is the Heroes Farm feature. In the game screen, if you have over one left after completing the task, we will transfer it to Heroes Farm mode. Here, players need to observe to arrange for as many points as possible to compete for the top position in the rankings. Each day, Booster Trial mode will be open and players will have a horse at their side. As you win your horse will grow older and give you lots of free boosters. 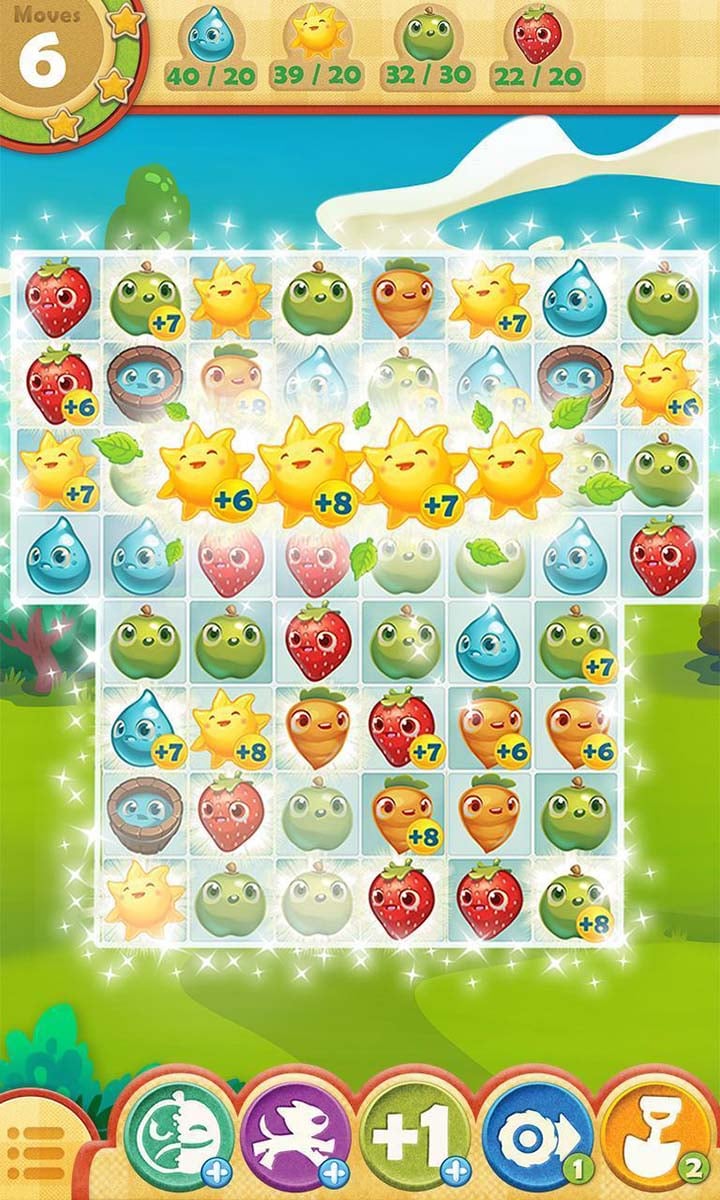 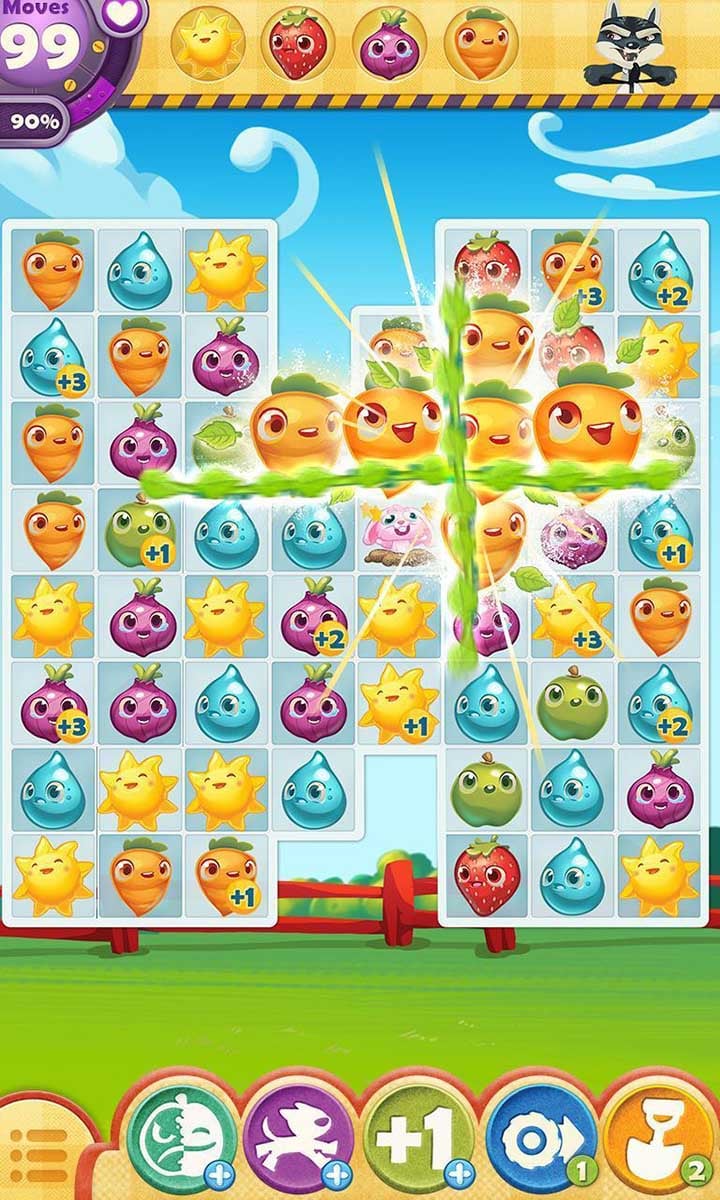 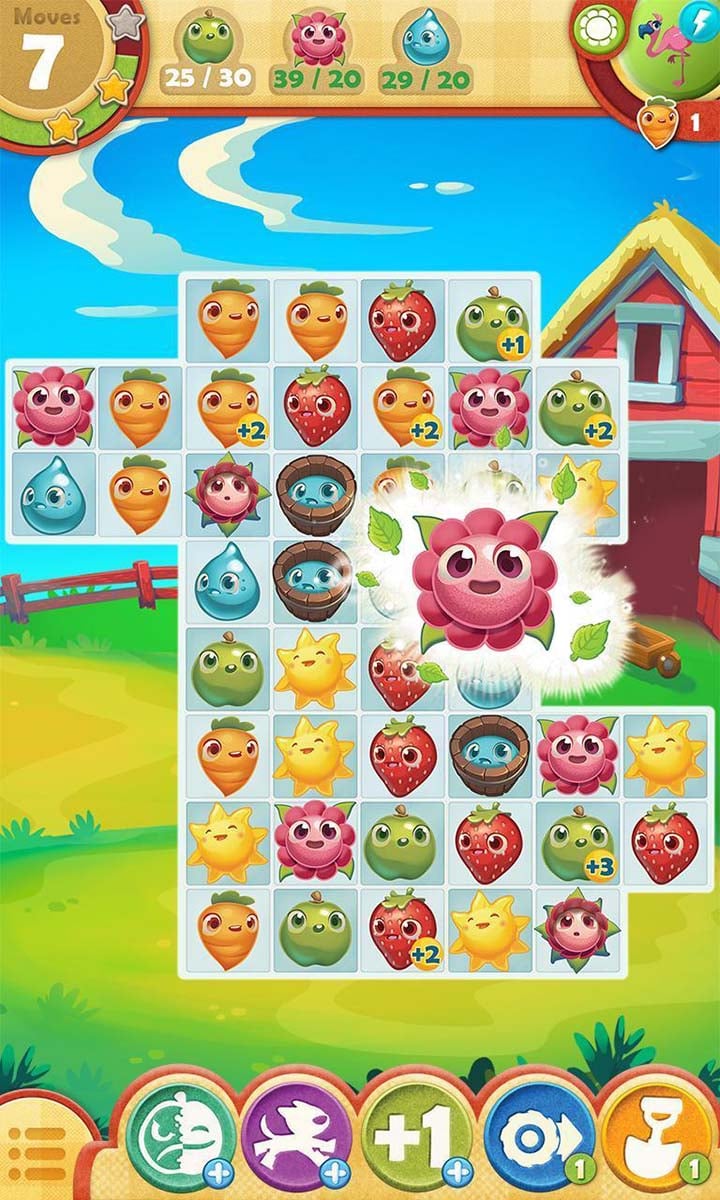 Like most of King’s games, they built Farm Heroes Saga with the criterion as simple as possible. Or Farm Heroes Saga is a game you can only play by yourself. For people of you who are fans of Candy Crush Soda Saga or Bejeweled, you will surely feel very familiar with the gameplay of Farm Heroes. Players only need to swap fruits and vegetables for each other to form rows (or columns) of three or more identical things. When you line up like that, they will explode and disappear, creating space for the fruits above to continue falling.

In each level, you will get one different mission that is mainly in the form of having to collect all kinds and the number of given fruits or vegetables in a certain number of turns. A special point is that you can combine elements in the game to create another interesting animal and get a higher score. For example, players will combine three eggs and create one duck.

Also, if you can collect enough animals in Farm Heroes Saga, the game will give you interesting items such as energy boosters to increase your play. The boss battles are also quite new in this game. Players will have to collect certain fruits or vegetables to lose boss blood.

Like Candy Crush Soda Saga, gamers will also only own a certain number of plays. And when the network runs out, wait about 30 minutes to continue the experience. However, with Farm Heroes Saga, King seems easy-going to the player when the power-ups that increase turns are much more affordable than the predecessor game. Besides, when you reach certain levels given by King, the player will be rewarded with three power-ups immediately that will bring more fairness to gamers.

The game offers simple 2D graphics with bright and youthful colors. They design photos of fruit very cute and friendly with beautiful special effects when placing fruits in rows of four or five. Falling leaves look soothing and eye-pleasing. Farm Heroes Saga has a playful, exciting soundtrack that adds to the fun for players. The sound effects of the fruits when ranked in rows four is hilarious and interesting. 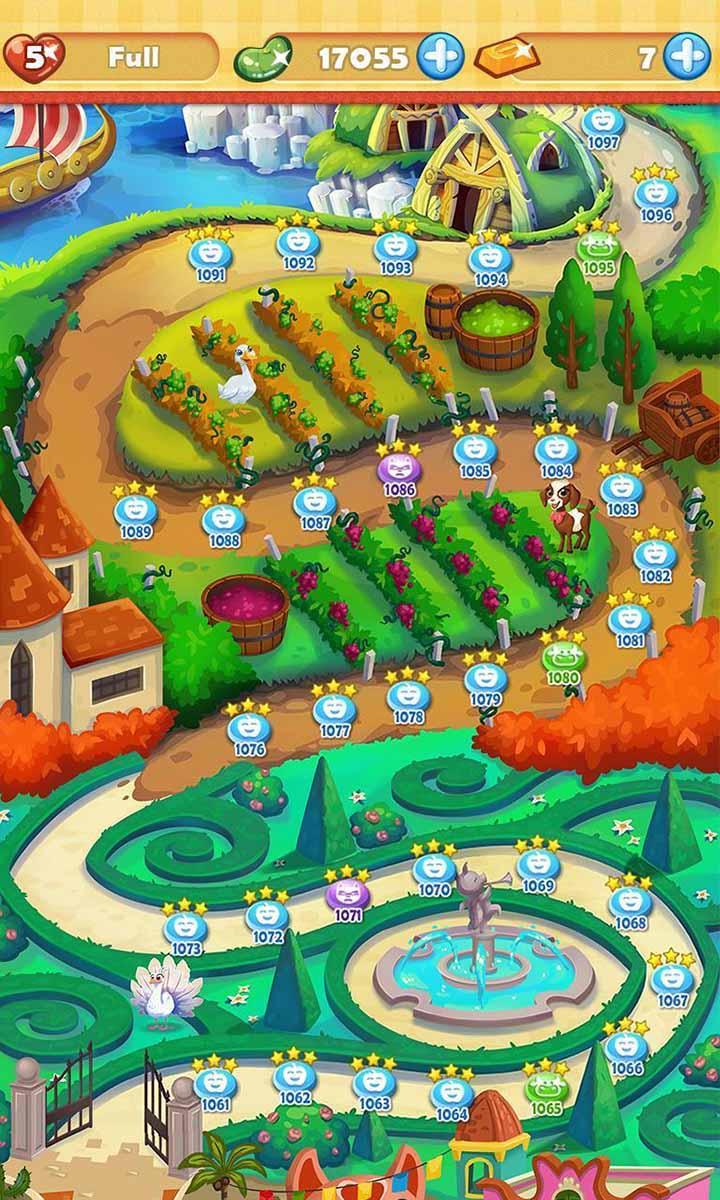 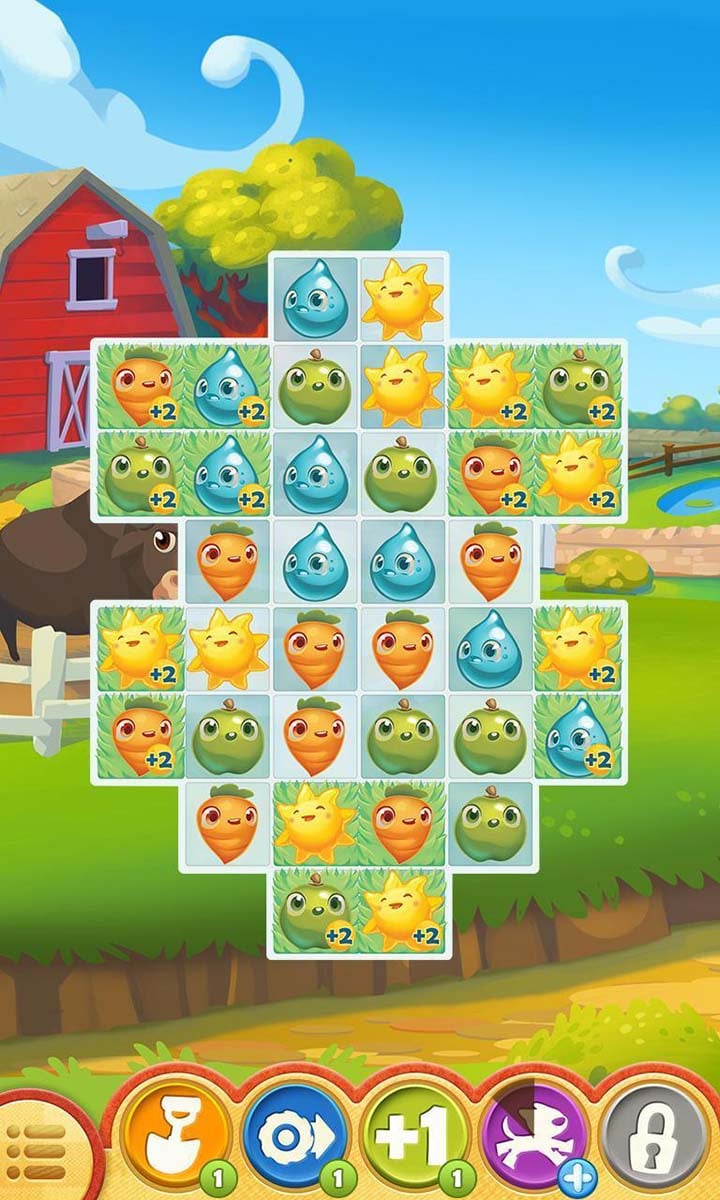 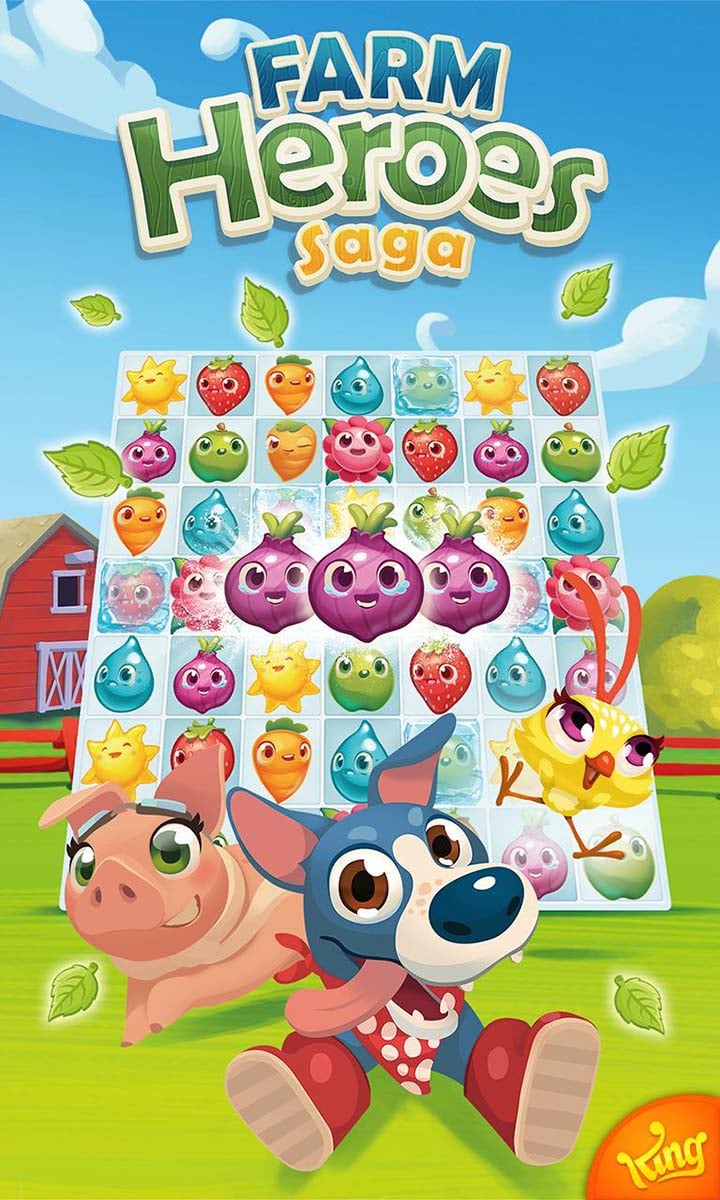 Farm Heroes Saga MOD APK is a fascinating farm-themed game. It is the last Saga game in the Saga Series, including Candy Crush Soda Saga, Pet Rescue Saga, and Farm Heroes Saga. The gameplay style of the game does not change much. So, you will not need to get used to and can enjoy relaxing moments with Farm Heroes Saga.

Farm Heroes Saga will entertain you quickly with cute graphics suitable for everyone, especially young children. Harvest fruit as required as the gameplay is like Candy Crush Soda Saga. Farm Heroes Saga will bring you wonderful moments of relaxation. What do you think about this game? Leave your comments below!