Iron Kill is a free fighting robot game being released on the Microsoft Store. The Iron Kill game will take you to the war of robots in the post-apocalyptic world with attractive 3D graphics.

Your mission is to create an invincible super robot to take part in spectacular turn-based battles. Players will choose weapons and equipment for the robot they have made in their style. When entering the war, act quickly and use all your strengths to destroy the opponent.

After each battle, the robot created by you will be upgraded to a new level to unlock special skills such as throwing fire, throwing bombs, or unique weapons. We must join the war of resistance to destroy all hostile robots and prevent them from coming to the future world, built with a modern, unique fantasy space.

You can download this fantastic game via this link.

Iron Kill is a beautiful fighting robot game that stands out with bold action, a massive collection of robots, and fierce online game modes. Iron Kill runs on devices with operating systems 4.0 and above, optimized for both smartphones and tablets.

Iron Kill is an action game with a beautiful fighting robot theme. The game takes players into real-time battles for championships on a worldwide scale with millions of gamers’ participation.

Join the game, and players will take on the task of building a team of steel punches, customizing them to their liking, and starting to compete with other opponents’ boxers. With a system of up to 30 giant robots with fast, powerful, and challenging gameplay, Iron Kill will make you up all night and day without getting bored.

Choose a robot and assemble it into a powerful robot warrior. Fight against mighty robots in the action game Iron Kill. Are you ready for this epic fantasy war?

Suppose you love the excellent war robot game series like Synthetik: Arena or Insane Robots. In that case, you will not hesitate to download Iron Kill and experience it on your Windows 10 device. It is an incredible fighting game that offers a battle between two giant and aggressive robots on realistic 3D graphics. Go head to head in the deadly war and see who will be the winner?

Liberated from the post-apocalyptic world, take your robot warrior into the arena in Iron Kill . The power of iron fists, giant physique, and powerful moves will help you win. With a worthy opponent, the Iron Kill game’s confrontation is always fair and thrilling to the last minute!

Start your character by touching the attack button on the screen. Go in front of the opponent and activate the Blow button to perform blows, punches, swing the blades at the enemy, copper. Then, it’s time to touch the Block button to defend when the enemy counterattack.

Once you focus and understand your opponent’s weaknesses, you will quickly adjust your character in both distance and speed to master the match. Remember that any robot possesses unique skills that only when they reach the top, will they be discovered. Therefore, a rush or delay can become a weakness for the opponent.

The fighting style in Iron Kill seems to be the combination of a series of boxing skills that are very popular in other robot games such as WWE, MMA, UFC, and Wrestling. However, K. O, your character’s name in this game seems even more aggressive when equipped with many modern weapons, from sticks, swords to power-ups, protective gear, and energy. It makes every appearance, K. O becomes more potent than before.

The main feature of the Iron Kill robot fighting game:

– Upgrade and customize the robot to increase the power of attacks and equip the character with high technology to unlock more powerful energy.

– A series of lovely time-limited events matches with strict requirements or tournaments featuring 12 belligerents to win the championship.

– Multiplayer online game mode allows you to compete against other players. 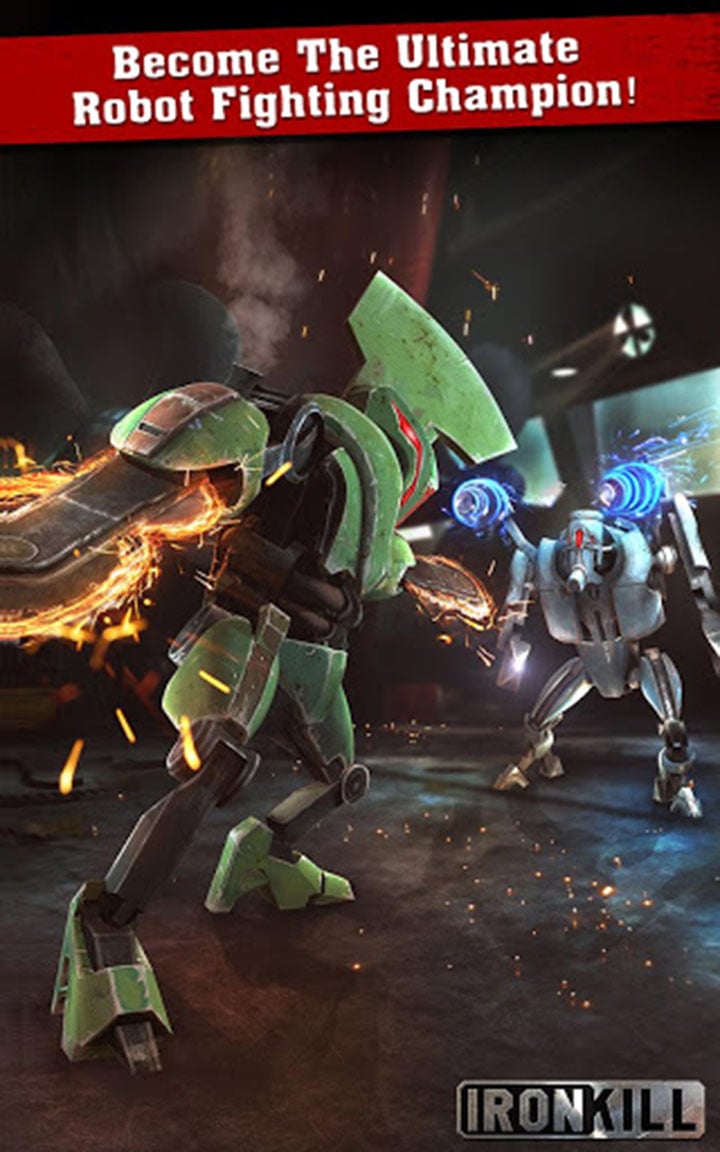 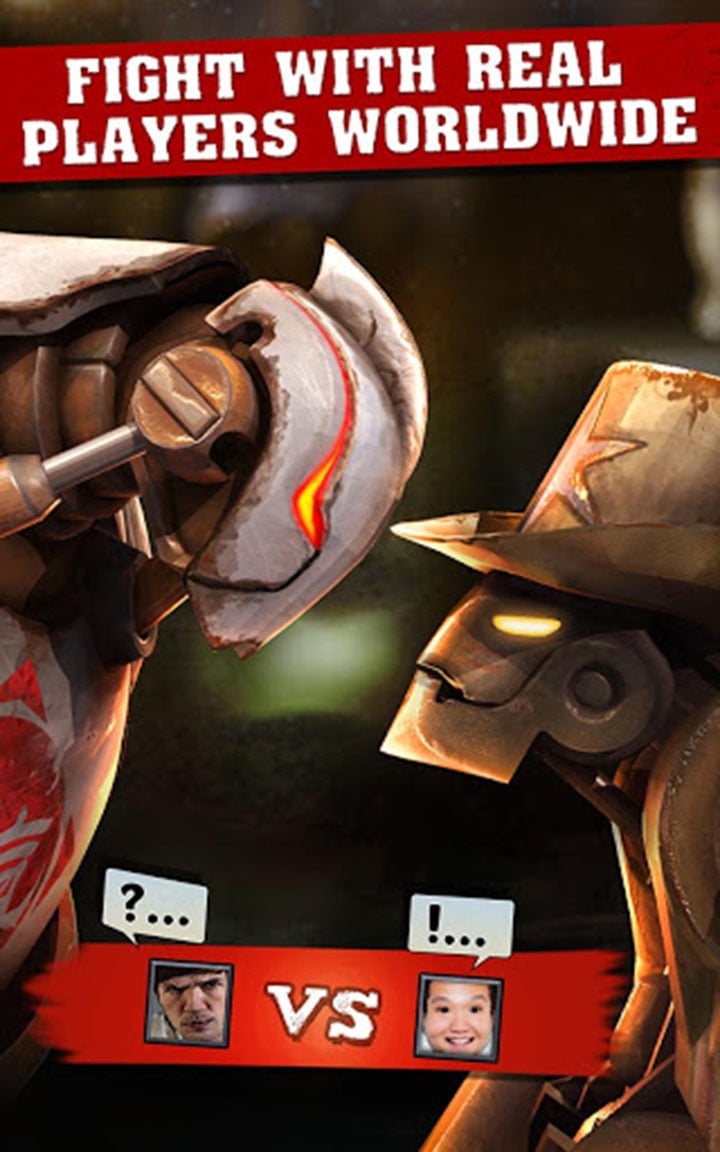 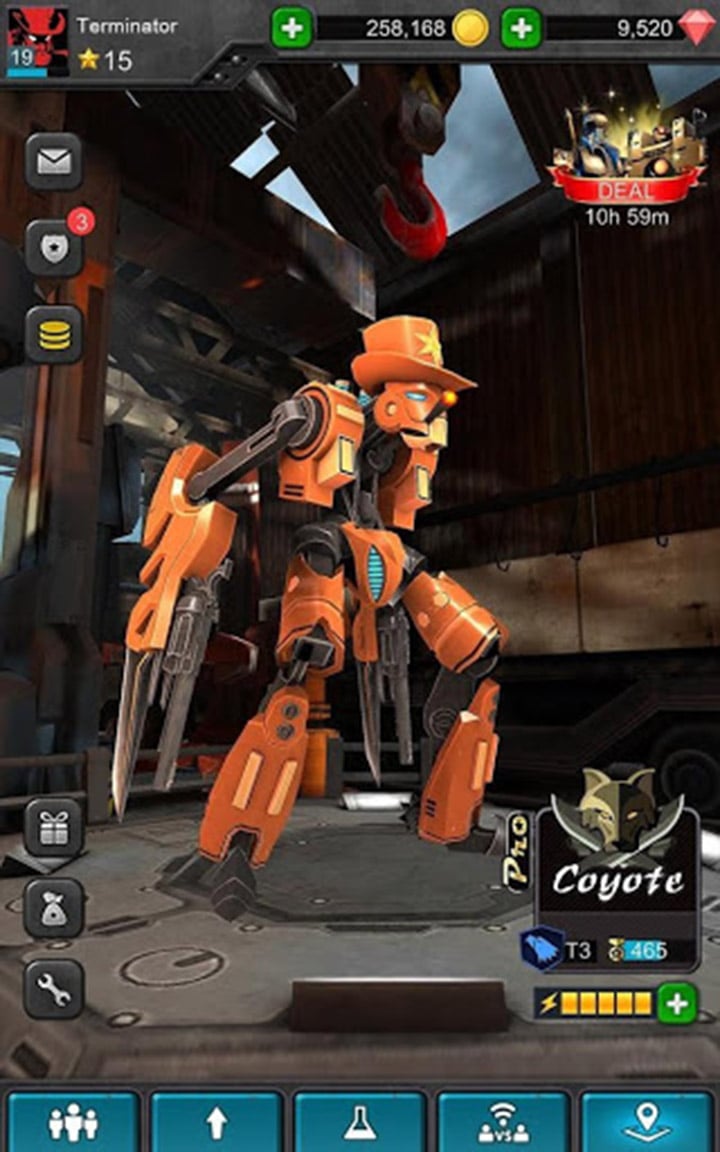 Since the Red and White Game era, many players have been keen on fighting games. Street Fighter was the hottest game of that era. And when the game hall appeared on the street, we became obsessed with a King of Fighters game again.

Robots, fighting, boxing, and the arena, these elements that stir the boys’ nerves, what will be the result when they come together? Why not try this Iron Kill fighting game?

The game story of Iron Kill unfolds like a robot coach. Players take part in various competitions by training, configuring, and upgrading their robots and improving their combat effectiveness by winning the game.

When you win the game, your level will rise. After you enter a new level, you can unlock more robot types. In principle, all robot players can buy and use it, and it will cost you gold coins and diamonds.

Game of Maps and Challenges

The left side of the game map is the path of the fighting game. Only by defeating opponents at each level can you compete with opponents of higher levels. It sets a challenge up on the small island on the right. And you can get direct rewards of gold coins, diamonds, and even robots by completing the challenge.

There are also some exhibition matches for viewing and challenging player operations. And we can get high gold coins for completing such games.

Different from other fighting games, the operation of Iron Kill is more straightforward. There are three primary attack buttons, which represent light punches, heavy punches, and defense.

Switching between light punches and heavy punches during an attack can complete a certain number of hits. The blue progress bar of defense value accumulated through the attack reaches the full state, and we can activate the shield of Shark Shield.

Similarly, if the cumulative attack makes the yellow progress bar’s attack value full, the ultimate “Damage” can be triggered. However, the activation of “Damage” requires a second operation by the user to determine the ultimate move’s attack power.

The user needs to activate the bar when it is activated. The more accurate the clock on the critical node, the higher the attack power. During the “Damage” attack, the game will show your beautiful actions in slow motion.

Iron Kill has reached a high level in both the screen and the game design. We believe that many readers, like me, think of the movie “Steel Fist” starring “Wolverine” Hugh Jackman when they mention this robot fighting game.

Although it was not the game “Real Steel” launched, it was later remade based on the original game. However, if you try this game and watch a movie, we believe you will think of some scenes in the film when Adam defeated his opponent.

It is worth mentioning that Iron Kill supports offline play. So, no matter where you are, you can pick up your phone to build your robot fighting team and start a legendary journey!

Your principal task in Iron Kill is using a variety of weapons to crush the enemy into a hundred thousand pieces. Combining the right equipment, skills, and tactics will help you gain an edge over your opponents in the robot arena.

Iron Kill features dramatic turn-based battles, which is an excellent chance for you to become a legendary super robot. First, choose weapons, armor, and equipment to form the elite robot warrior. Create your gameplay and become the most robust robot. It only takes a few minutes, and you have finished your battle machine and are ready to go!

Aim for enemy weaknesses and destroy them with the click of a button. Throwing bombs and shooting frantically, continuously, so that the opponent could not turn around. You can increase your strength and endurance by continually upgrading the robot. Wipeout cold-blooded robots and turn them to ashes in Iron Kill!

Can you become a super robot, possessing maximum power and mastering the Iron Kill arena? It is an excellent game for Real Steel World Robot Boxing fans, but this time you can experience it comfortably on a bigger screen!

– Many types of enemies display power to confront.

Iron Kill is a robot war game with epic shooting scenes. In this futuristic robot game, you play the role of a robot with a top-secret mission. To defeat enemies, you must master the gaming environment and complete challenging tasks as a robot warrior.

Note that, behind the underground constructions, there is always a sniper robot ready to destroy you. Takedown all robots until the level is over. Victory will belong to the bravest and most elite robot. Let’s build a robot and step into the ring now!

Synthetik: Arena is a standalone expansion of the top-down shooter Synthetik: Legion Rising. The game upgrades the modern shooter’s line, where technology shines in a vibrant arena. In the match of Synthetik: Arena, players must survive against powerful opponents in five unique challenges.

Master modern weapons and customize freely to match your fighting style. Explore the diverse arsenal of weapons, items, perk, and character upgrades. You can fight alone or Co-op two people online to prove your hidden strength.

Referring to the shooter. At present, people will immediately think of the Battle Royale style in PUBG Mobile or Fortnite. But not because of that. The heat of Synthetik Arena P.C. is reduced.

Combination game mode helps you to combine strengths and exploit each other’s strengths and weaknesses. Share perk, item, buff, and loot together with your teammates. When they run out of ammo, you can instantly share.

The background of Synthetik: Arena game began in 1985. After years of slavery, A.I. minions of Kaida Corporation, the world’s leading robot manufacturing company, established the Machine Corps and destroyed the species.

With Synthetik: Arena, the developer wants to give players an immersive and technical shooter experience, allowing you to play the game the way you want and create new gameplay. Inspired by the 90s shooters’ series incorporating novel elements, Synthetik: Arena will be a practical choice.

In the game Insane Robots, you will fight to the death in a unique card arena. Compete in intense 1v1 matches. Lead the robot rebellion through randomly generated survival arenas.

Overthrow the evil robot boss in a 15-hour single-player campaign. It is a tremendous card-style robot battle with lots of unknown elements.

As its name suggests, Insane Robots are a battle of crazy, violent robots. Instantly discover a collection of over 46 diverse robots in five intense game environments. Unlock new robots during the game to create an unbeatable team.

In this adventure into the sci-fi world, you will accompany crazy and powerful robots, passing eight tournaments (can be played again). Do not forget to buy and sell robots and cards to enrich your forces. It is an endless war, and there are countless scenarios for you to exploit.

Players will fight all the most powerful robots in the world by participating in the online game arena or taking part in significant fighting tournaments to get high on the rankings quickly. The events you take part in will have valuable rewards that help the robot increase its power to create players’ reputation.

Iron Kill MOD APK game will be an attractive choice for those passionate about robots because too great graphics builds robots’ battle. The realistic game sound creates a fantasy world to enter the game like proper warriors quickly. Download the game Iron Kill MOD APK to start the great war of the planet’s cutest robot.