Let’s play the role of Luffy to experience endless adventures with One Piece Treasure Cruise, the new Japanese role-playing game. The cult manga One Piece has never let fans be less crazy with the challenging journey on the sea with super special friends. Let’s play together to experience these adventures with One Piece Treasure Cruise. Launched a Japanese version in May 2014 on both Android and iOS platforms, they base One Piece Treasure Cruise on the super popular One Piece manga. By the end of 2014, the game had over 10 million downloads in Japan. It is enough to understand the level of popularity of the game. The game landed in the West in February 2015 as One Piece fans are present everywhere in the world. Entering the world of pirates, the first thing that hits your ear is the dexterity combined with the fun sound of the game. Luffy’s voice is playing in confusing Japanese. If you are not his fan, it will annoy him. Otherwise, One Piece Treasure Cruise is a perfect choice for fun hours with relatives and friends.

One Piece Treasure Cruise is a mobile online game based on the One Piece comic series famous for its turn-based role-playing game combining an impressive orb system. This game gains excitement in the gaming community because the gameplay is both familiar but also creative. The most amazing feature of One Piece Treasure Cruise is the turn-based combat system with orb – the property of jumping around. Gamers must convert the character to the most suitable attribute. The games around the One Piece have always been interested in developers, publishers, and gamers. And perhaps with One Piece Treasure Cruise, a world-class playground will be available for fans of this series. It is good news for One Piece fans when recently, the developer Bandai Namco has released One Piece Treasure Cruise worldwide. Since its launch in Japan from May 2014 up to now, this game has had over 10 million downloads. But it is only a domestic number. True to what we have always craved, this game follows the main plot of the manga and anime One Piece. It means that Luffy will accompany you and selects other familiar faces as your crew to fight with powerful bosses such as the Royal Seven Emperor, the Yonko, or the Navy. In terms of gameplay, we can say that One Piece Treasure Cruise is like Heroes Charge, a game that has been raging lately. You will also have to use the unique skills of each character on your team to win. With vivid and majestic sound combined with a sharp 3D graphics platform, One Piece Treasure Cruise will bring players into the world of Pirates in the most authentic way.

One Piece Treasure Cruise is a new role-playing game for both iOS and Android, built on the most famous manga series in Japan. This pirate-themed mobile game comes with both a storyline and an active combat system that promises to be expensive in a test of RPG’s unique strategy and speed. Also, in One Piece Treasure Cruise, players will play the role of Monkey D. Luffy to recruit many members to the team and unleash many unique things such as new ships or characters and collect many members. Players will only have a certain number of rare team members at each stage. However, the player can increase the number of these members by increasing the amount of the total cost. The Total Cost statistics will increase as the player levels up the character. It is also a way to increase maximum stamina. Battle chains are what players can use to attack against the enemy. Click on the target you want to defeat, then let everything complete. However, be very careful because the player will most likely sink instead of restoring health points. At the end of each combo, a Doom attack will appear, and a massive attack will take place. Pay close attention to the organization of the team members because if you combine the characters properly, they will use Tandem attacks. But wait for TND slits to appear to use them. We will activate them as part of the attack chain. We will use special attacks by swiping the character upwards. Keep these attacks down to take out dangerous bosses. Gathering members for your team is simple. But we should detail that the further players go in single-player mode, the more new ships they will unlock. The new ships will strengthen the entire team. The special characters are usually rare characters that improve each time the player upgrades. Focus on upgrading only one character at a time. At high levels, upgrade the characters of the same type and similarity. And special combinations are essential. And players will have to use up too many cards combined. 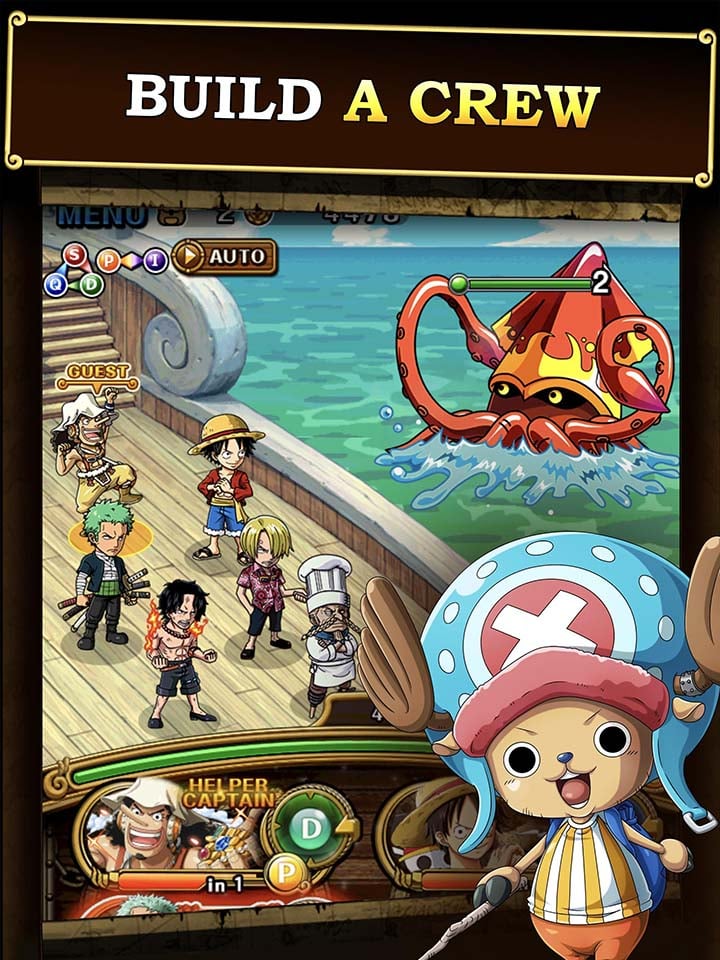 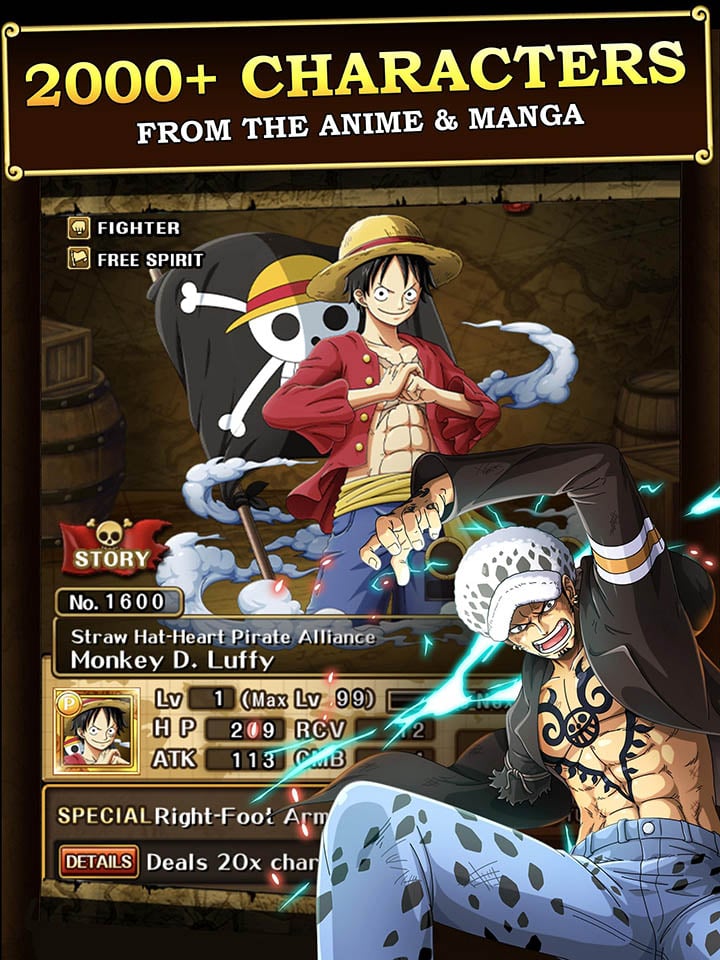 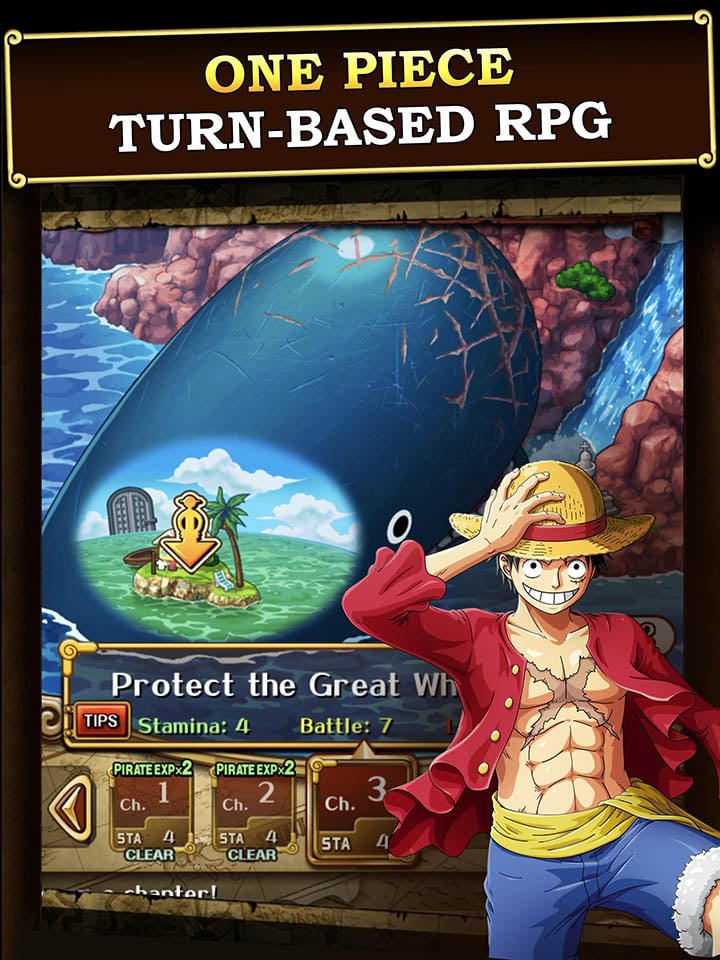 How to Play One Piece Treasure Cruise

Opening the game is a classic Japanese narrative show with familiar images. If someone has the patience and the endless passion for these adventures, they will translate each page meticulously. But if you are already in the plot, you will want to skip this section to step into the real journey. The image in this mobile game is cute. And the developers redesign the characters in an adorable Chibi style. You will take the mighty power from every pirate’s punch. The game designers also put lots of effort into each attack and movement. With vivid sound combined with a sharp 2D graphics platform, the game brings players into a real-world that makes it easy to feel the urge to fight. Entering the real adventure, players will have to play the role of Luffy and teammates to face the evil pirates with easy-to-understand gameplay. But it’s not that simple. When taking part in the battle, it will divide the screen of One Piece Treasure Cruise into two major parts. The first part is the characters with tough progress of the match, appearing in a charming context. A second part is almost a place for you to control this match. It includes thumbnails to show each character’s turn. Tap and Create Combo is the reminder and also the only strategic key to this battle. Be quick and choose the right time to combine the attacks of the characters to create powerful combos. Each character has a forte and different modes of attack, which is also a cool point of this game. The game offers gamers four classes to choose from as Fighting, Slashing, Strikers, Shooting. From here, you can create a powerful character system with an impressive skill combo. Players can also comfortably watch characters fight without getting bored. However, with the auto fight, your job is tapping in the right places. Many people will think One Piece Treasure Cruise is just a simple game for kids. Please correct yourself if you made a big mistake. The game will make you tired. To get a combo, you will probably have to wait for the first time to study how the combo works. One Piece Treasure Cruise does not allow creating innocent combination skills, but only allows the related characters to create attacks. Not to mention having to use intelligence to analyze the game or perseverance to overcome bosses with powerful enemy forces. An amazing feature of One Piece Treasure Cruise is that it allows you to connect online with your friends and invite them to watch the top battles with other players. Thanks to that, the game has a growing and growing community. Since this is a free mobile game, you can completely download the MOD APK Version here. The game connects smoothly. You will not have to do anything else. 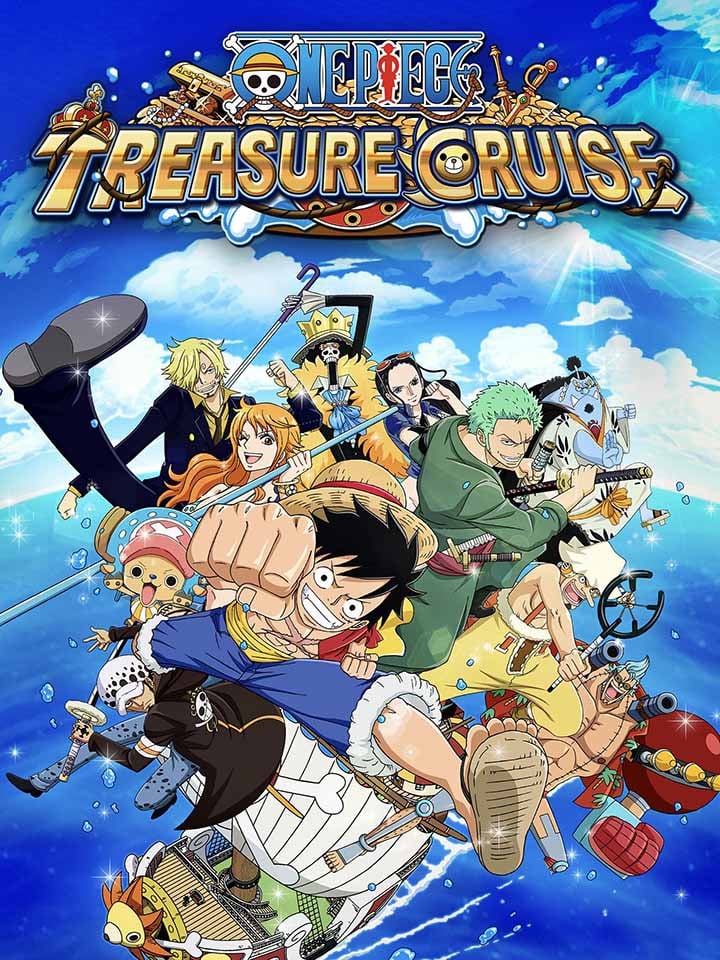 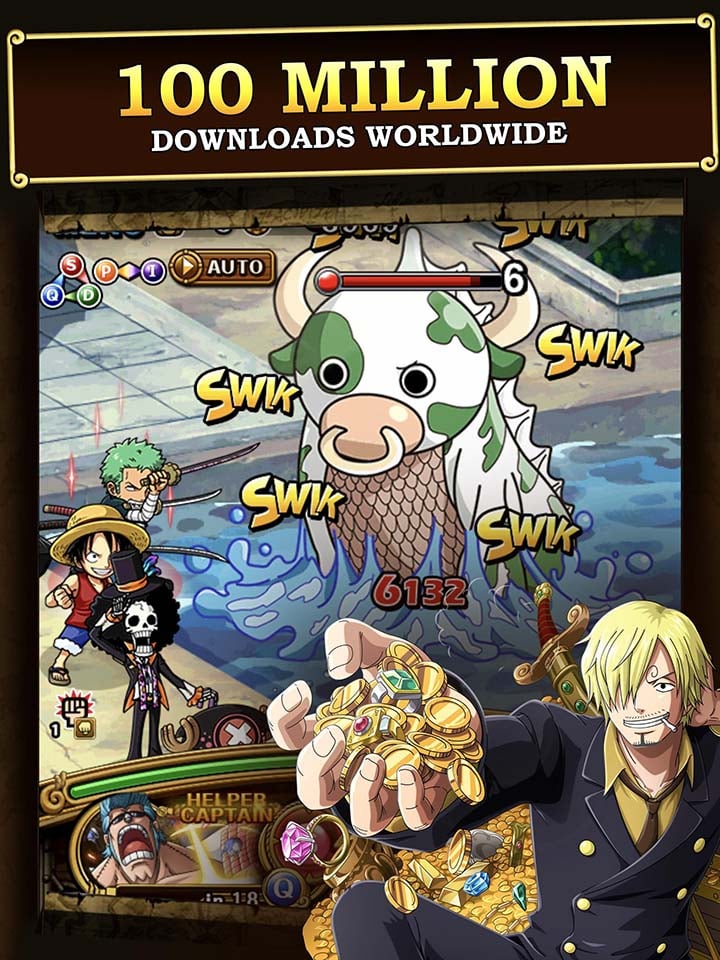 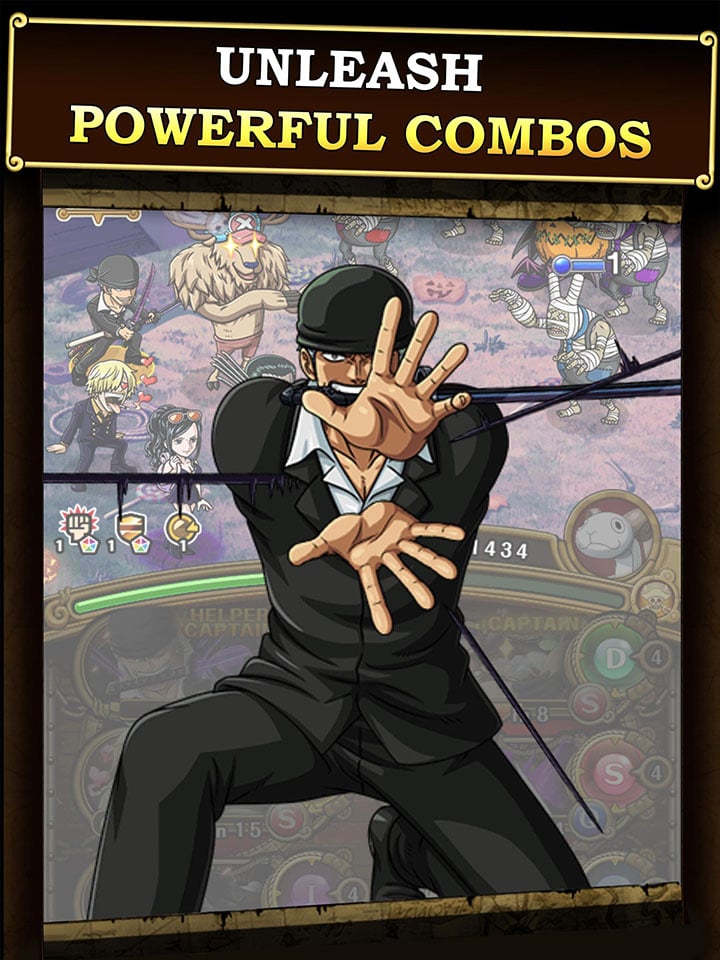 Real Meaning of One Piece

One thing that fans are most interested in in the One Piece world can tell the truth about the pirate treasure that the pirate king Gol D. Roger discovered. And until now, we only know that this treasure turns out to be the legacy of Joy Boy – a legendary figure. It contains all the facts about the world, the unanswered things like what is The Void Century, the meaning of people with “D” in their names, or ancient weapons. Based on Roger’s words, this treasure is something that will make hunters turn their heads because of the unexpected ending. And after 800 years, no one has set foot on this island, so Roger said to his teammates, “Let’s name this island Laugh Tale.” Thanks to that, after his journey, Gol D. Roger was famous as the Pirate King and named the treasure he found as One Piece. But everybody is curious about the great treasure of One Piece. There must be a reason for everyone to name this great treasure. It must imply something like Roger had named the island Laugh Tale. As we all know recently, there have been a few signs that Roger’s last adventure did not get Joy Boy’s complete treasure, because he arrived too soon. And as the prophecy said, there will be TWI new kings appearing. And they are the heir to the Joy Boy legacy. Perhaps that is why people just named this treasure One Piece because for them the treasure that Roger discovered is only part of the endless story of the pirate world. And there will be many more One Piece. And each of these “pieces” will contain part of a giant map leading to the veritable treasure.

Adventure content can be held permanently or for a limited time. And the difficulty level is indicated by the number of stars. Beginners should proceed with the adventure according to the following flow.

First, it is an adventure that beginners challenge. It is also an adventure targeted by Chopper’s request. The purpose is to develop characters to challenge the next decisive battle adventure.

Coliseum characters play an active part in type formation parties. Chaos Difficulty is challenging. So, beginners should try the underground.

The game holds once the treasure map a month. Content that goes around the map. You can collect EXP by going around. And you can get the limited breakthrough material with achievement reward and ranking reward.

You can get characters limited to Kizuna Battle and Stone Plate, which raises the potential level. And also, Proof of Friendship can raise your support level.

It is an adventure that can be challenged by holding it permanently. In a long-term battle with 20 battles, the clear reward is a ship. Since it is permanent, it has a low priority, so let’s challenge it when you finish the above adventure.

It is a permanent adventure where rewards are reset once a month. You can get not only rainbow jewels but also all-purpose deadly books and proof of friendship.