If you have to work on a design project, editing a source file is something unavoidable. QuickEdit Text Editor is a quick and stable text editor optimized for smartphones and tablets that might help you in this case. Nowadays, there aren’t several text editors on Android that is good at this, but only QuickEdit could be one of them.

How come? That’s because the app combines many essential features for code editing with a well-ordered interface. More than that, it comes up with everything you’d expect from a professional text editor. It could be the syntax highlighting for you’ve most likely to work with, line numbering, indentation, and more. Are you ready to explore it further now?

Undoubtedly, the coder has been one of the hottest jobs lately. It’s because this era is known as the era of information technology where things get influenced by technology and modern machines. This career involves the whole creation of codes for computer programs that allow them to function according to human preferences.

Due to such a great impact, finding an application that can support programmers is totally worth it. With QuickEdit Text Editor, your code editing task becomes less frustrating than ever on a mobile phone. Don’t miss a chance to check out different features available in the app to make the most of it.

These include quick and smooth scroll support, line highlighting, and a quick & powerful search or replace. You can do this by using the search button on your device, which is a little detail that a lot of text editors almost forget. If it was before, you had to utilize the computer to begin coding and writing code, now you’ve got this powerful tool to help you.

At the present, smartphones are all functional enough to take advantage of. Only a Bluetooth keyboard could make your device become a useful laptop. And QuickEdit is just one of many handy applications enabling you to work with dated code as smoothly and fast as if you used to work with a computer.

Among a great abundance of features that QuickEdit owns, we prefer its huge series of handy syntaxes, availed for more than 40 programming languages. Such a thing is obvious since to serve the high demands of all programmers, the app has to serve many platforms out there. And the syntaxes here are probably the most useful ones for them to use.

All they do is to access the available repository, copy the line, and then place it in the existing code. When there’s something incorrect showing up, they will have to fix a bit of it. The app delivers a great convenience enabling them to respond to the demands of the clients instantly. Speed and reliability are exactly the keys to the developers earning more money than others.

Overall, the application features a basic and clean user interface with two icons on the top right of the display. One is for opening and saving files while the other for simple editing actions such as redo, undo, indent, and insert color values. Aside from these, you will get to experience some other familiar functions, from search, replace, share, the syntax to preview. Everything is available on the 3-dot menu. 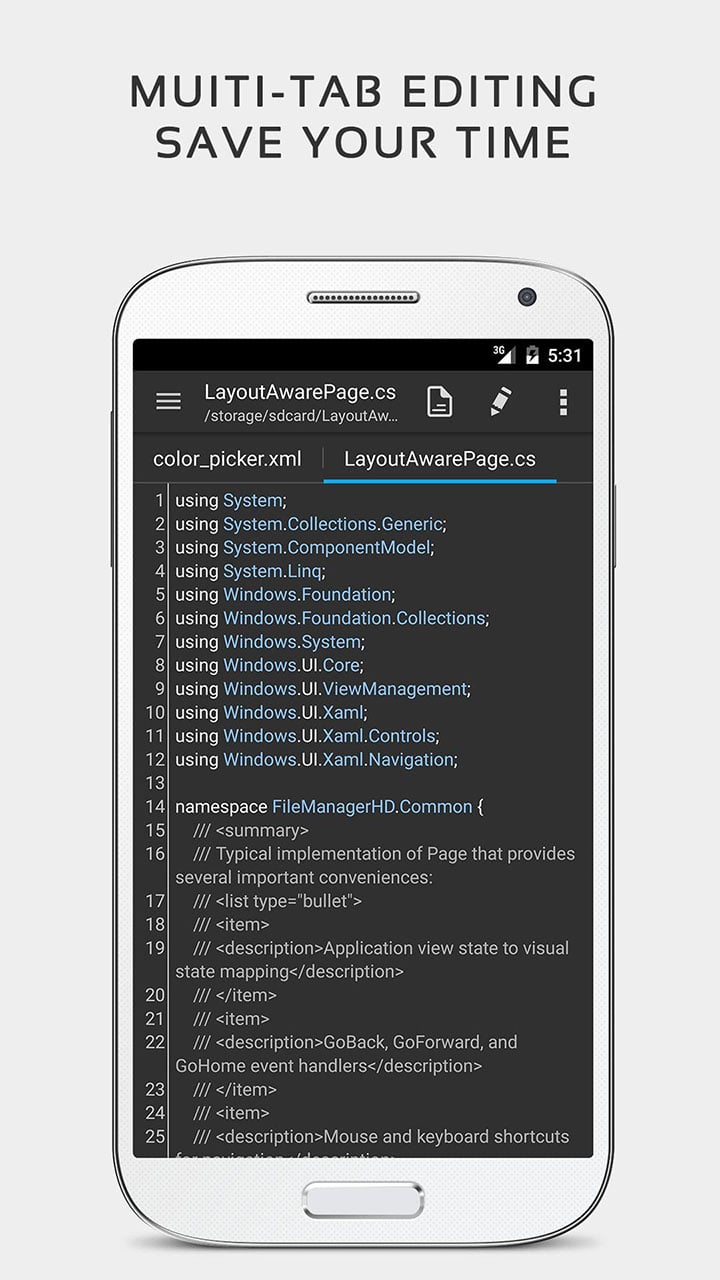 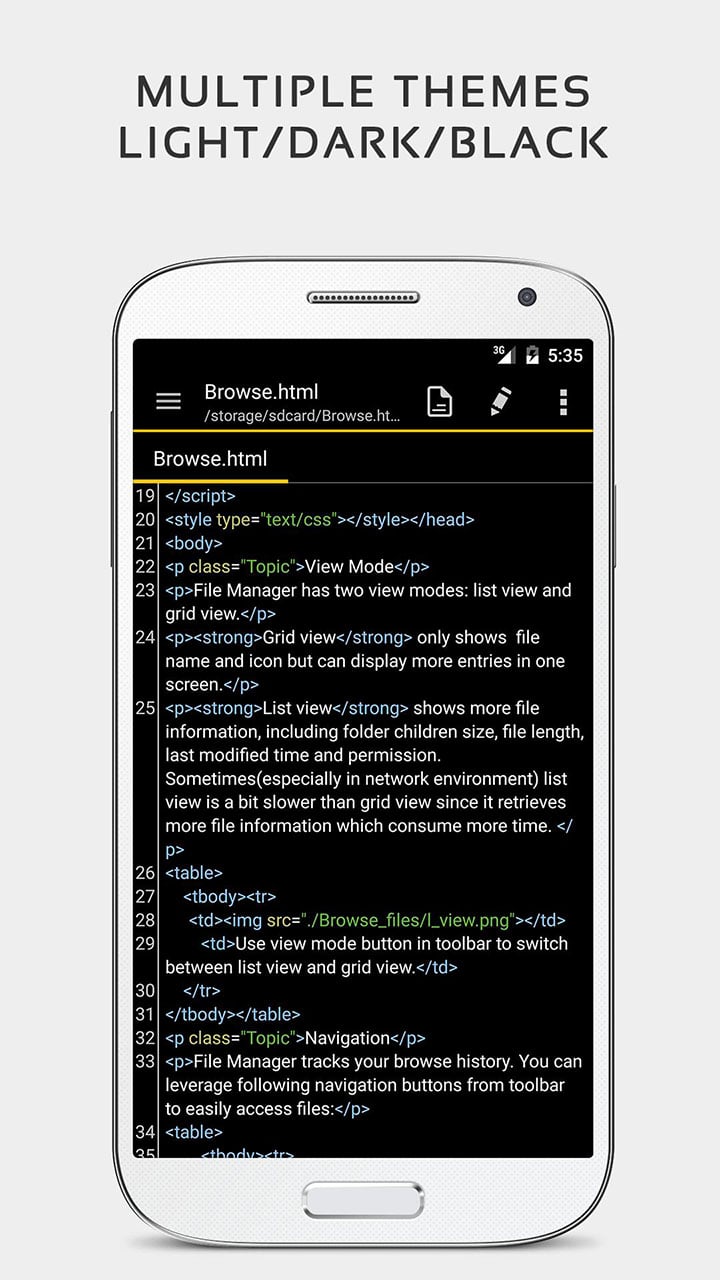 QuickEdit Text Editor is a nice app to use for editing and writing codes you can find on the play store. Though the screen is small, the editor still enables you to open multiple files at the same time with scrollable tabs. Besides, the users can form and edit text files not just on their local devices, but also access or sync files on Cloud storage via Google Drive, Dropbox, and OneDrive.

This editor is overall good, but some users complained about two issues with it. First of all, it doesn’t deal with TAB characters in the plain ASCII text file. Now it shows them as four spaces and generally neglects columns. Therefore, it’s impossible to avail the TAB character to line up the columns. The second problem is the change in menu arrangements.

Once switching to the full-screen mode, you will see that change. It also means that the available screen space won’t increase, and this also changes the way the users interact with the program. Despite such problems, QuickEdit is the best by far. A lot of apps have a poor interface or are not stable to use as this app. It owns sensible options, to make the whole process of working on text files a smoother experience.

With an application that is well-made and loaded with essential features, you can gain more productivity with less mess. It’s certainly a high-quality text editor for working with simple text files and a code editor for programming files. The application suits both general and professional use. It consists of several performance optimizations and the users’ tricks. 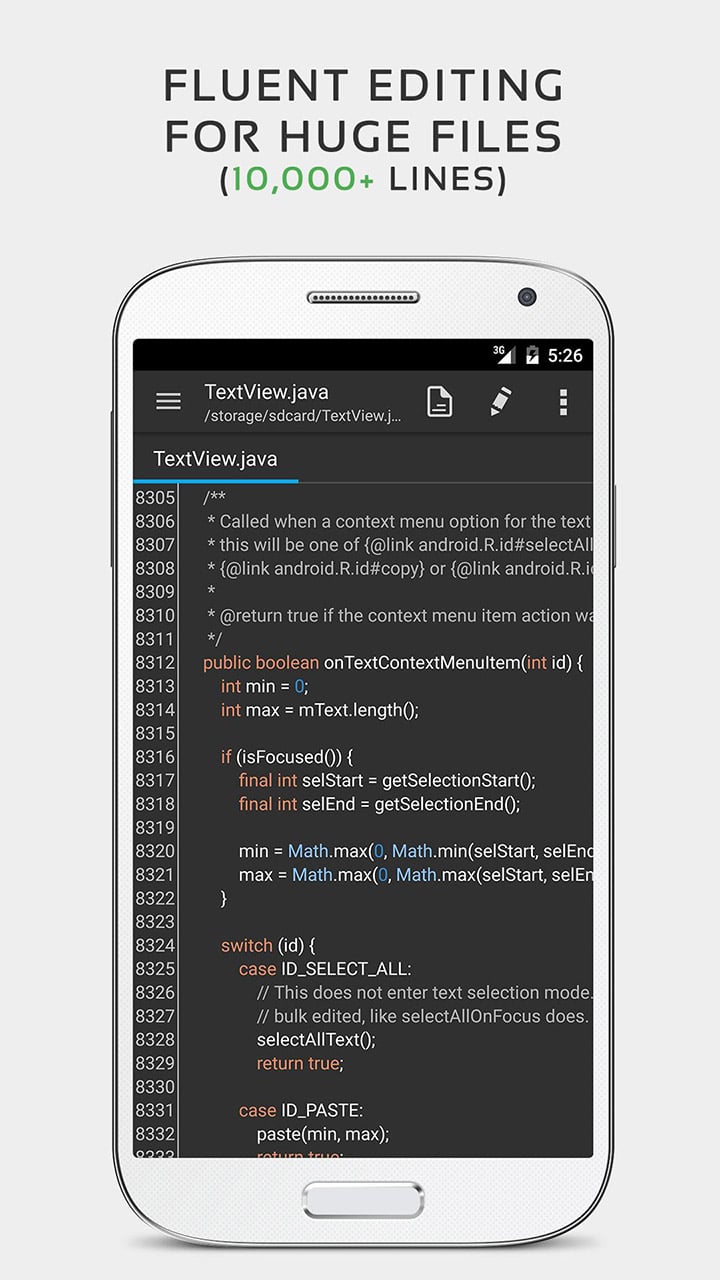 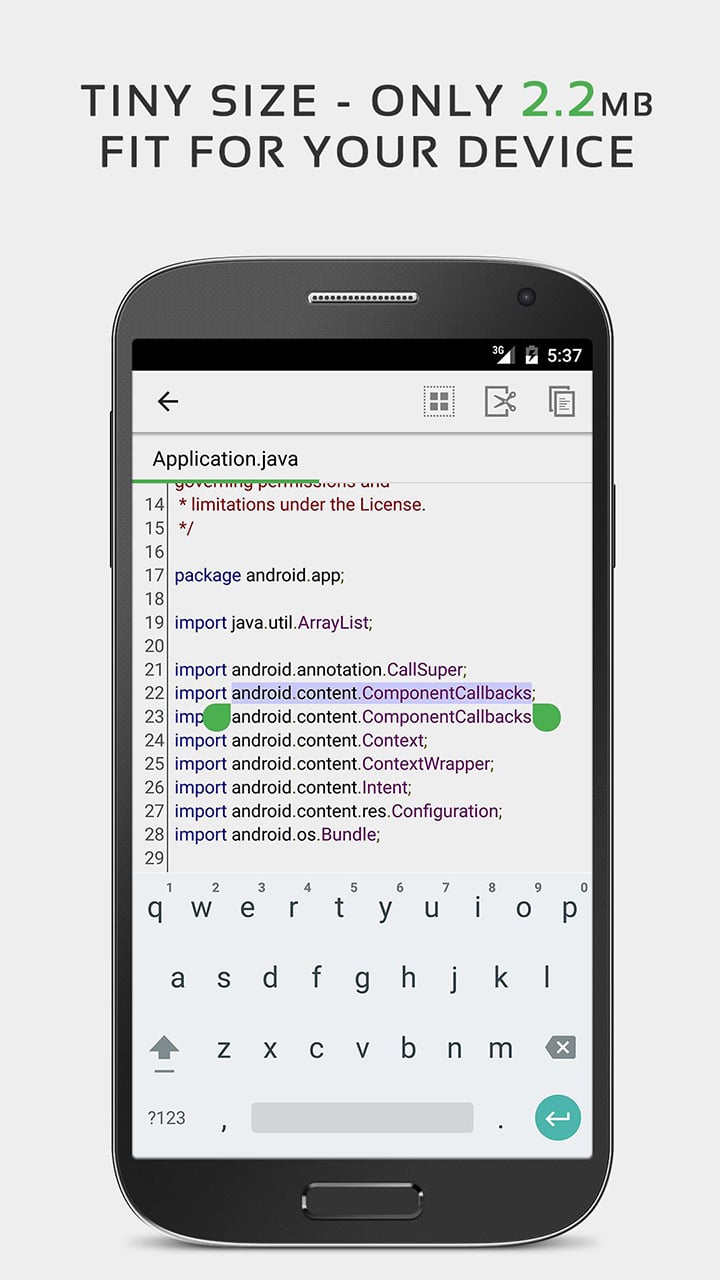 Most actions you have to do on the screen will get calculated so that they can interact just like the way you’re availing a computer mouse. Not only that, but the horizontal and vertical scrolling are also quite agile and completely matching finger motion. Once viewing the code to edit, you need to hold the screen, and then it can stop at once.

Don’t miss touching the screen so that the bottom could jump up a keyboard to help you type and fix at the same time. Also, both copy and paste tools are delivered here for greater flexibility. Make sure that there won’t be any certain mistake at all, and you need to touch the pen icon at the top of the screen.

What if you don’t do it right? Let’s undo, redo, and more because these moves have no limit. In other words, even when making an error a hundred lines long, it’s still possible to fix it with this command.

Among features, Multi-tabs is a nice feature that allows the users to open different programs at one time. Thus, they can freely edit them whenever they want. For instance, whenever finding a mistake in this program, let’s correct it in a neighboring program. Note that after fixing one mistake, remember to save everything every few minutes. When something unexpected happened, the data would be stored.

Apart from that, QuickEdit Text Editor owns the real-time feedback mode that enables you to quickly track how the clients react to these modifications. Once they don’t feel contented, instant feedback will appear and you must keep fixing it.

QuickEdit Text Editor Mod APK won’t support editing remote files straight in the present. However, every popular host including Dropbox and Google Drive can integrate with the Android file picker. This lets you open a remote file directly from the app, or allow you to edit files through the respective applications.

For those who want to download the app, its free version is great enough for average users but keep in mind that it gets supported by ads that might sometimes show up when you openj or save files. QuickEdit is a nice application for the work so the publisher has almost optimized everything. Once accessing its screen, it’s easy to see how it sounds like a web browse.