Ragduel is a unique 3D action game. You will become a cowboy in the West, participate in exciting physical gun battles for mobile devices. The game was released by VOODOO- a producer known for its unique games. The game brings a lot of new things because of the exciting gameplay. If you are bored with conventional shooters, the game will enjoy simple gameplay and be highly thrilling. Of course, you have constant smiles, and fun with random headshots.

Ragduel emphasizes the element of physics as attractive, but practical. It would help if you shot wisely based on actual physics. Your time to create the right shots, and aim to shoot down opponents in the shortest time. Currently, the game has 20 levels of crafting, and each group has interesting opponents/challenges. At each level, you have up to 4 confrontations, and a reward match. You will take a long time to conquer the challenges of the game. And you also know that publishers are constantly updating new content in new updates. You try to unlock all the weapons and become the scariest gunman in the Far West town. The game is suitable for everyone with cute cartoon images. The game runs on all smartphones or tablets.

Ragduel offers enjoyable gunfights. You control the character “face to face” with another opponent, which brings the exciting experience of a real man. You will fight others by touching the screen, and you hope the gun line will reach the right target. The more shots you shoot, the more the arm will move. If you plug in the head, then you will kill the enemy instantly. So it would help if you controlled the angle to make the final shot. Of course, if you are lucky or have a good picture, then you can use the headshot to finish the game faster than usual. Keep calm and focus on the bullet’s path!

Ragduel offers a beautiful journey as a cowboy in the West. The game is about adventure in arid deserts. You use guns to destroy opponents, and carry out missions against the Indians. The Indians are trying to cause you trouble, and you have to prove your shooting skills to win the title of “Best Sniper in the Wild West”. You need to be quick, or you need to be beaten by the opponent. If you die, you will have to pay the first part of the level again. Maybe no one wants failure, but you’ll get the inevitable failure a few times. Therefore, you need to act more carefully. If you play at higher levels, then you will have to play against more talented ADCs. All of the opponents are great shooters, and they have many years of adventure experience on the western meadow. After defeating your opponents, you will unlock more unique and powerful weapons.

Ragduel provides an RPG element. You accumulate bonuses after each battle to upgrade your character. You optionally increase health, and agility. You can become a quick gunner, or you can become a shield of steel with abundant health. The faster you take down an opponent and the minor damage you get, the more money you will receive. Therefore, you need to achieve accuracy in every match. Thus, every headshot adds more bonus to your pocket. After passing four opponents, you will participate in a bounty match. The content of the bounty matches is quite interesting. You will shoot animal dummies (like unicorns, horses), or destroy a wooden tower to earn money.

Ragduel has an intuitive match interface. You look at the top of the screen, and you will see the health bar for you and your opponent. If you shoot in the leg or arm, the opponent only reduces by 1/3 of HP. If you hit in the body, the opponent will lose half. If you shoot in the head, then you can kill your enemy with a bullet. The game is a deadly battle, so you can’t defend or dodge. To win, you only have to defeat your opponent before you are defeated. If you have combat experience, then you can shoot at the opponent’s arm to destroy the gun.

Ragduel shows appeal with millions of downloads. However, the game gets too many ads, and this negatively affects the player. Besides, the game also has no instructions on how to play. As a result, players feel disoriented at the beginning. Some people may even feel depressed when they are unable to find direction. 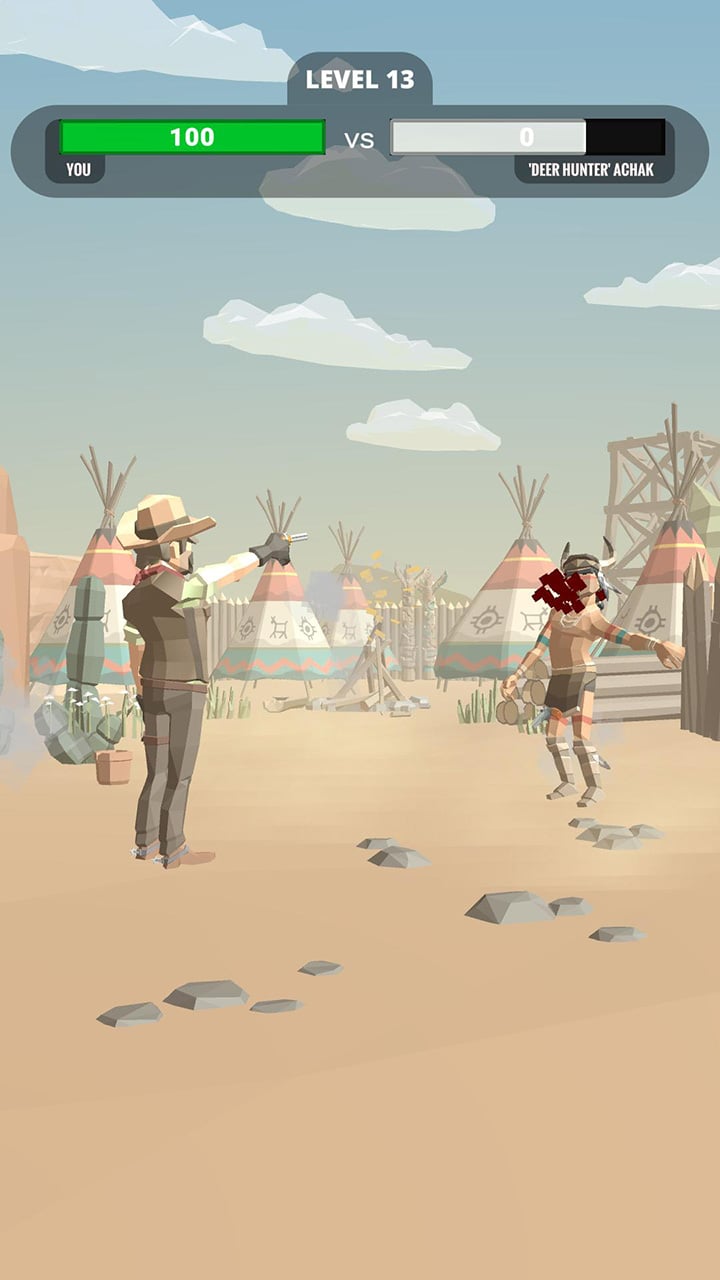 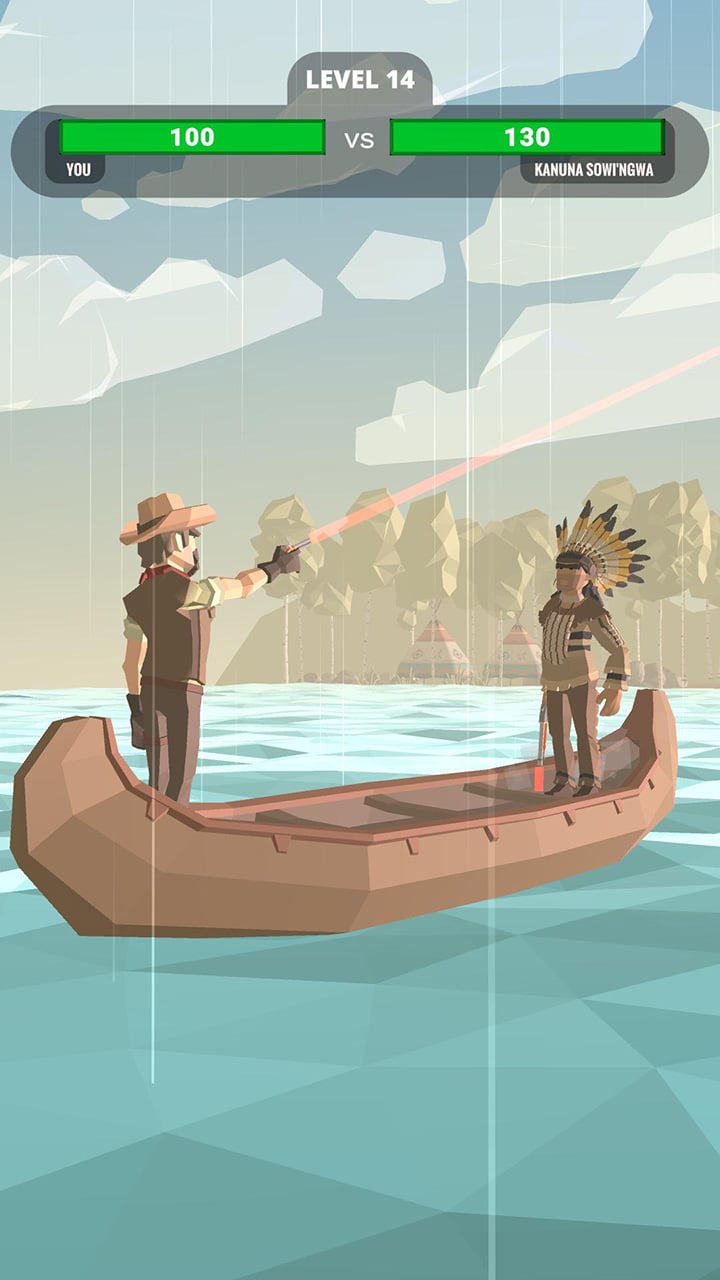 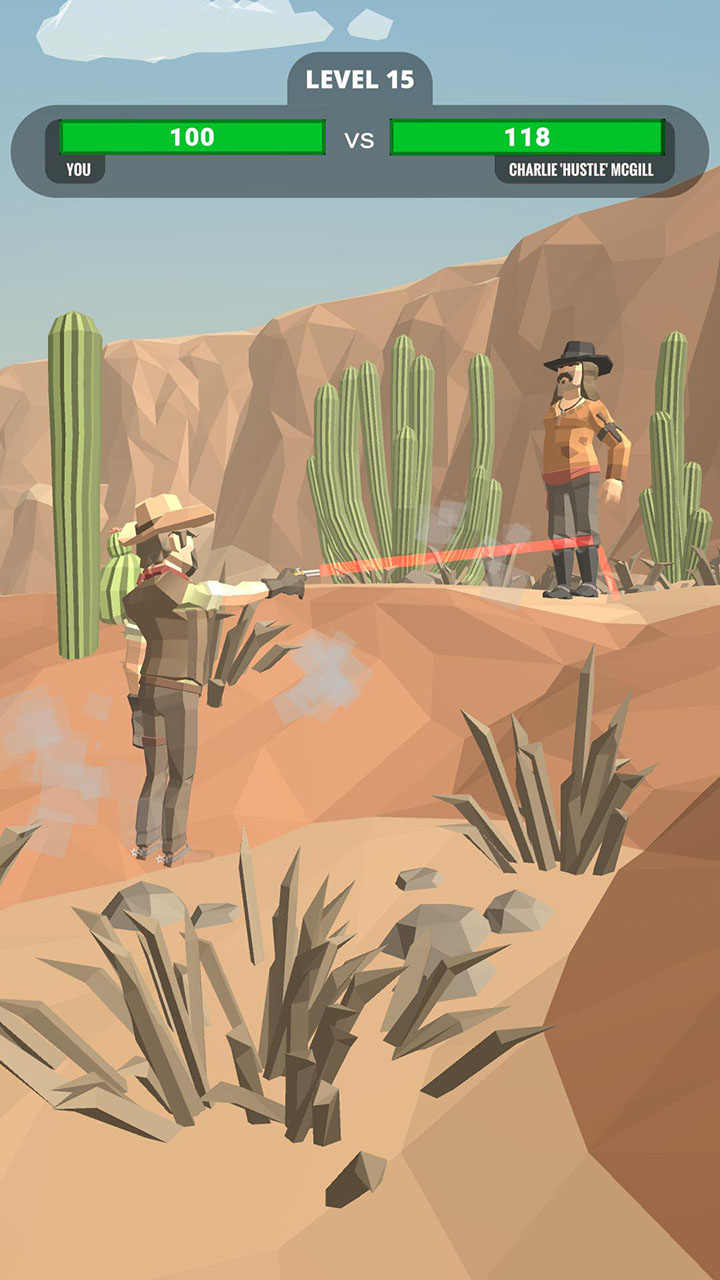 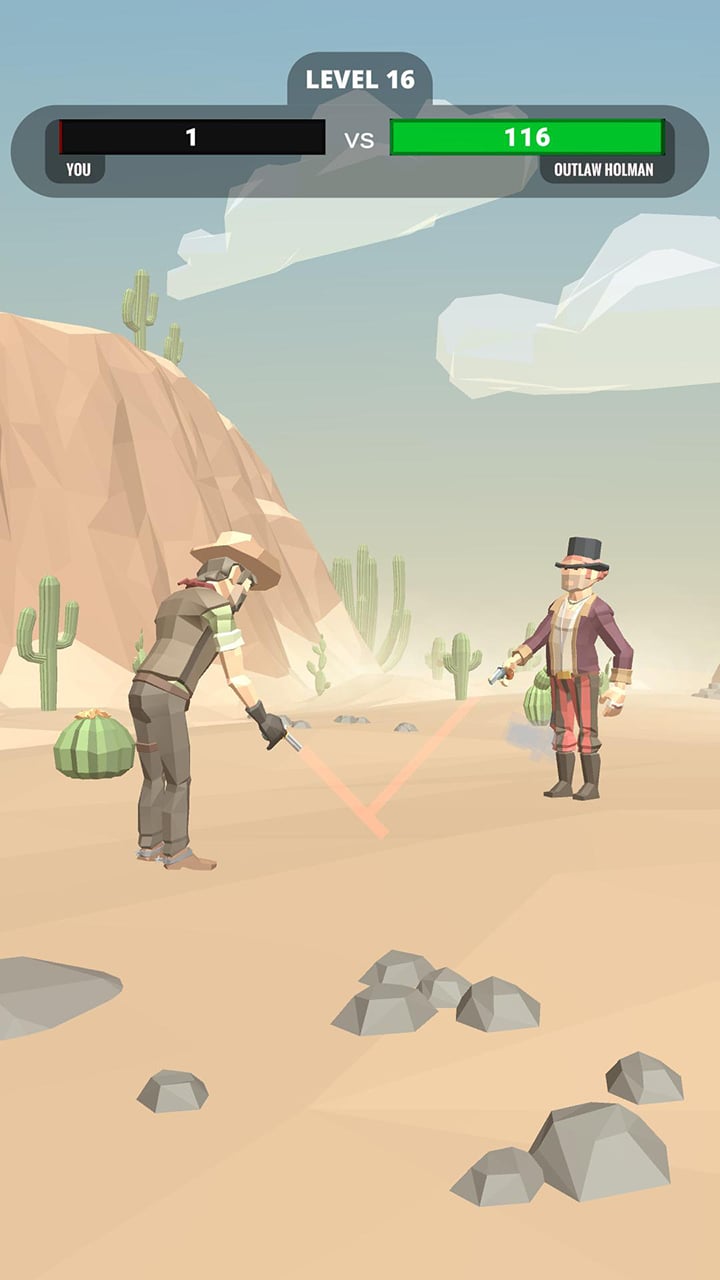 Ragduel has a simple control mechanism. You need to click to play. However, the game has no beginner’s guide. The cowboy is armed with a laser gun, and the arm looks quite loose. It would help if you quickly pulled the trigger when the character’s arm is swinging backwards, and the next swing will be at a higher position.

Ragduel has a detailed 3D graphic background and has a cartoon pixel style. Overall, the graphics are not great, but everything is quite eye-catching and sharp. You will adventure through deserts, rainforests and the sea. The game has sound lighting effects, and realistic physics movement. The play depicts the cowboys of the West well, and the gunfights take place with the most authenticity. Most of the details are motionless, except the arms and eyes are always on the move.

If you like simple fighting matches, then try “Slap Kings”. The game is fun, and allows you to make the most potent hits. Try to win first place in a difficult tournament, and unleash many special powers.

Ragduel is an excellent third person shooter arcade game. Graphics are made with three-dimensional pixel art animation. You try to win against your opponent with your pistol in a fighting match. Both your opponent and you have limited health points. But a person will die from a bullet in the head. The game is highly entertaining and has a lot of laughter because of the fun gameplay. Get ready for realistic physics-based gunfights in some of the crazy locations in the Far West. Swing your character’s arm and wait for the right moment to shoot a bullet at your opponent’s head!