If you have played Superhot before, you see that it is the same as Samurai Flash. However, you will play from a third-person perspective. And instead of shooting, you control a Naruto character holding two swords to cut everything.

The player’s goal in the game Samurai Flash is to run through levels, slash opponents and obstacles with a sharp blade, and win. Like Superhot, the time in Samurai Flash passes as you act. If you stand still, time goes by slowly. And opponents and everything also goes in slow motion. It is when you need to take advantage of to avoid bullets, cut the bullet in half, or find another direction to approach the enemy.

The control mechanism of the game v is also quite interesting. You can touch and swipe your finger on the screen to control the character to move in the desired direction. However, because the controls are quite sensitive, you need to know how to release your hand at the right time to prevent your character from rushing too fast.

If you are a fan of Samurai-themed games with simple gameplay, Samurai Flash is a name that you should not ignore. With simple gameplay by hitting the hammock to increase speed and gliding to defeat the enemy, the game promises to give players a full of exciting experiences.

In Samurai Flash, the player’s primary task will be to control his Samurai warrior moving across the terrain, passing through enemies, and using weapons to destroy them to complete the assigned missions. Depending on the game screen, the number of enemies and their ability to attack against the player will also differ. Players will need to hammocks, dodge, and move skillfully to both dodge and kill them as quickly as possible.

Each level will have a difference. You will destroy all enemies, finish the target, destroy buildings, or fight bosses. When completing the quest, players will receive bonuses used to purchase necessary items and upgrade characters. 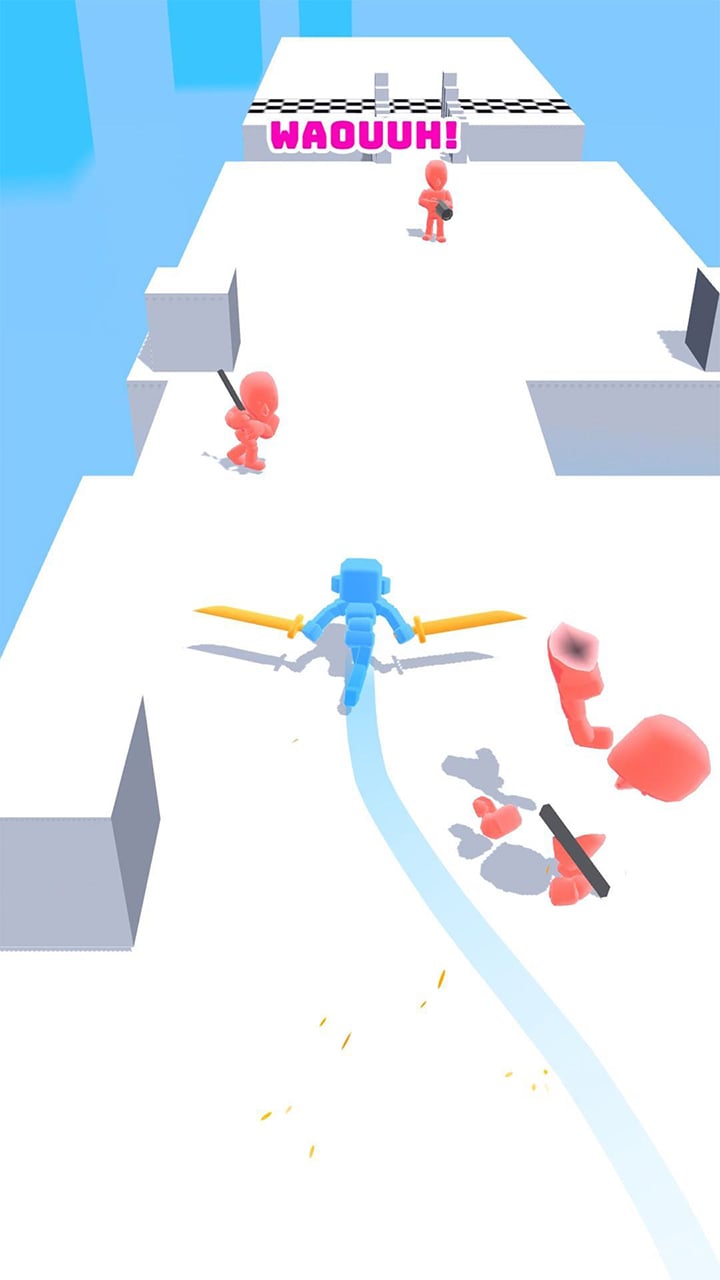 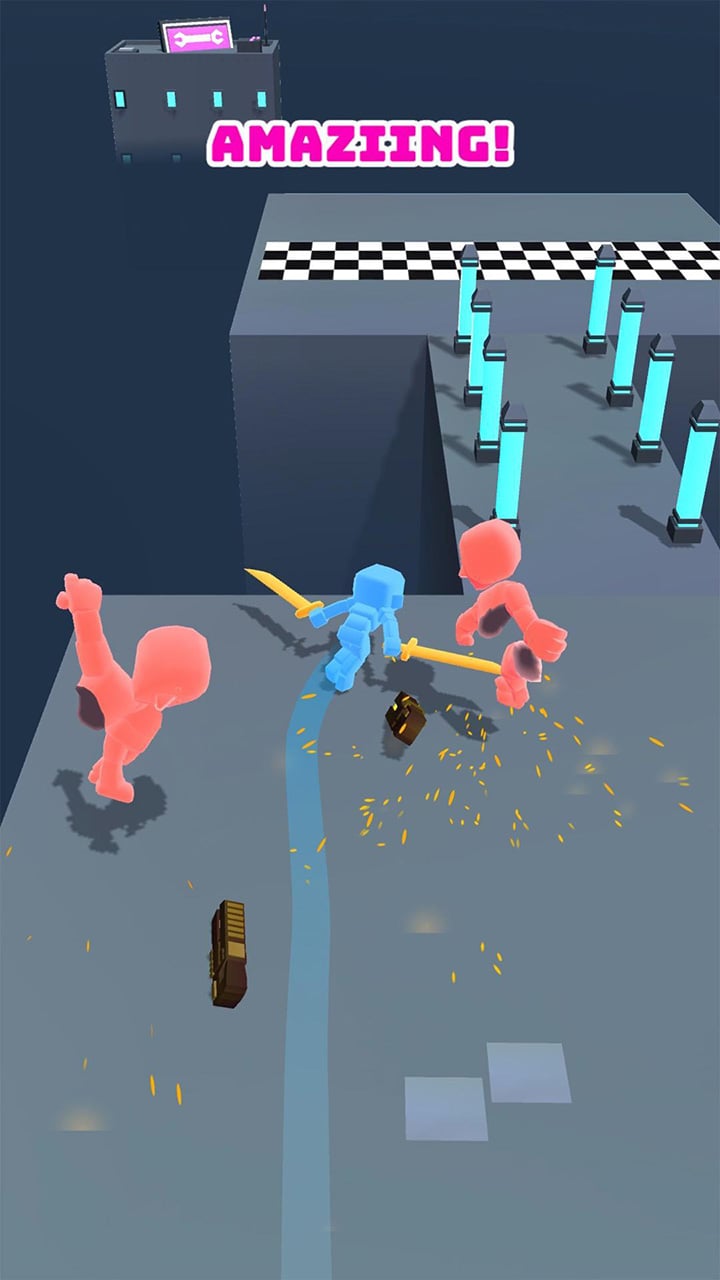 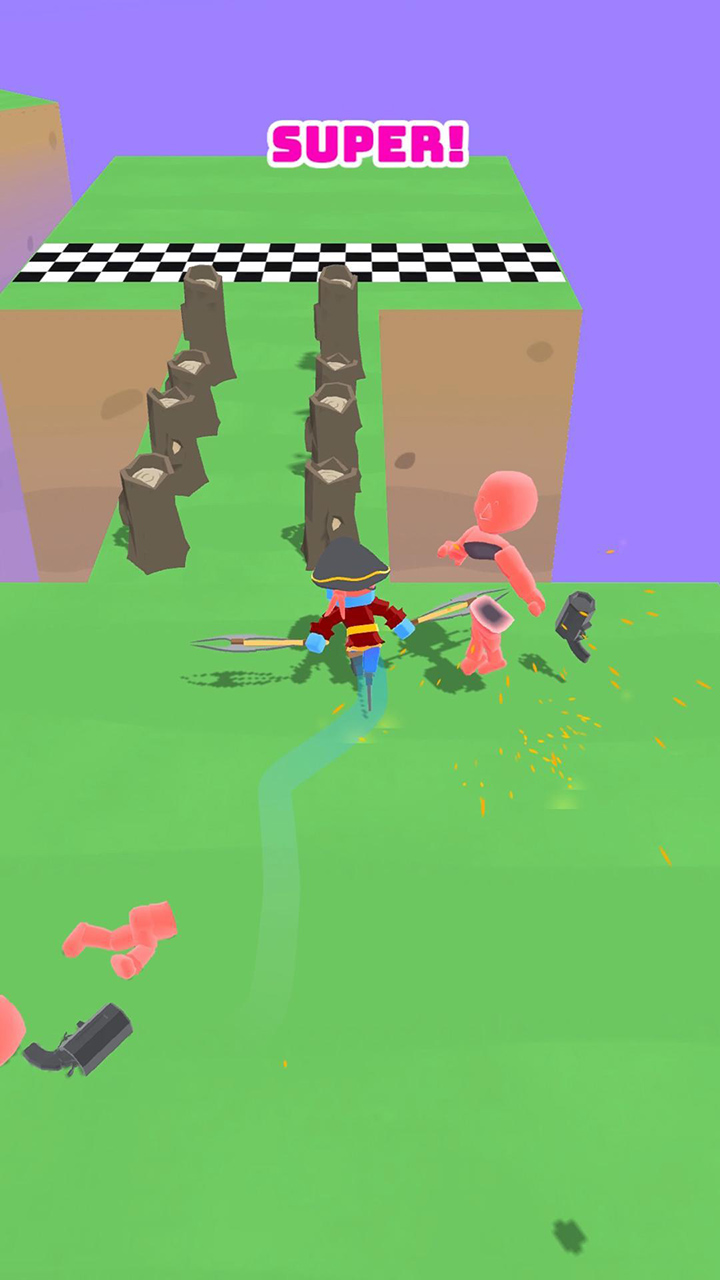 To make performing the mission simpler and faster, players can use the bonuses to upgrade their character. When upgraded, the character will increase movement speed and flexibility when turning directions. The character’s arsenal in Samurai Flash is diverse. With a multitude of different weapons such as sword, knife, and blade, players can freely collect and use them on their way to eliminate violence.

Besides weapons, players can also collect costumes for their characters of all shapes. These costumes will help change the appearance of the Samurai warrior and make the gameplay more fun and interesting.

Depending on the level of play, the designs, themes, and colors will change. It helps the game not to be boring. But it will give players a feeling of adventure and adventure more interesting. The game comes with simple gameplay. You can move, glide through enemies to destroy them, and win.

The game offers a diverse screenplay with countless enemies and bosses with countless different attack abilities. The rich fashion warehouse with colorful outfits helps to change the character’s appearance to become more beautiful. A myriad of weapons contributes to an exciting, engaging, and dramatic battle. Upgrade your Samurai to increase your ability to move, glide, and slay enemies.

In the Samurai Flash, you will become a powerful samurai. But you will face many enemies. And the weapons held by each enemy are different. You need to use attack methods when facing enemies. Then destroy all these enemies under the premise of ensuring your safety.

The latest version of the samurai flash is a casual action-adventure game. There are also different game levels waiting for players to take risks in the game. Take part in the game from a third-person perspective and fight with other characters. Players can also use various props to break through.

Samurai Flash features superb samurai who will fight side by side with you. You can face the challenges of many powerful enemies on various battlefields. The game also adds excellent game elements and pays more attention to the use of strategy. Familiar with the environmental factors of the war situation, you will help your samurai release more combat skills!

The game provides five scenes, a diverse and rich dynamic combat system. The protagonist has six skills to upgrade. Rich game content and gameplay will bring players an endlessly fun game experience. For the third-person perspective, full of three-dimensional animation characters, you can use different combat skills, multiple weapons. 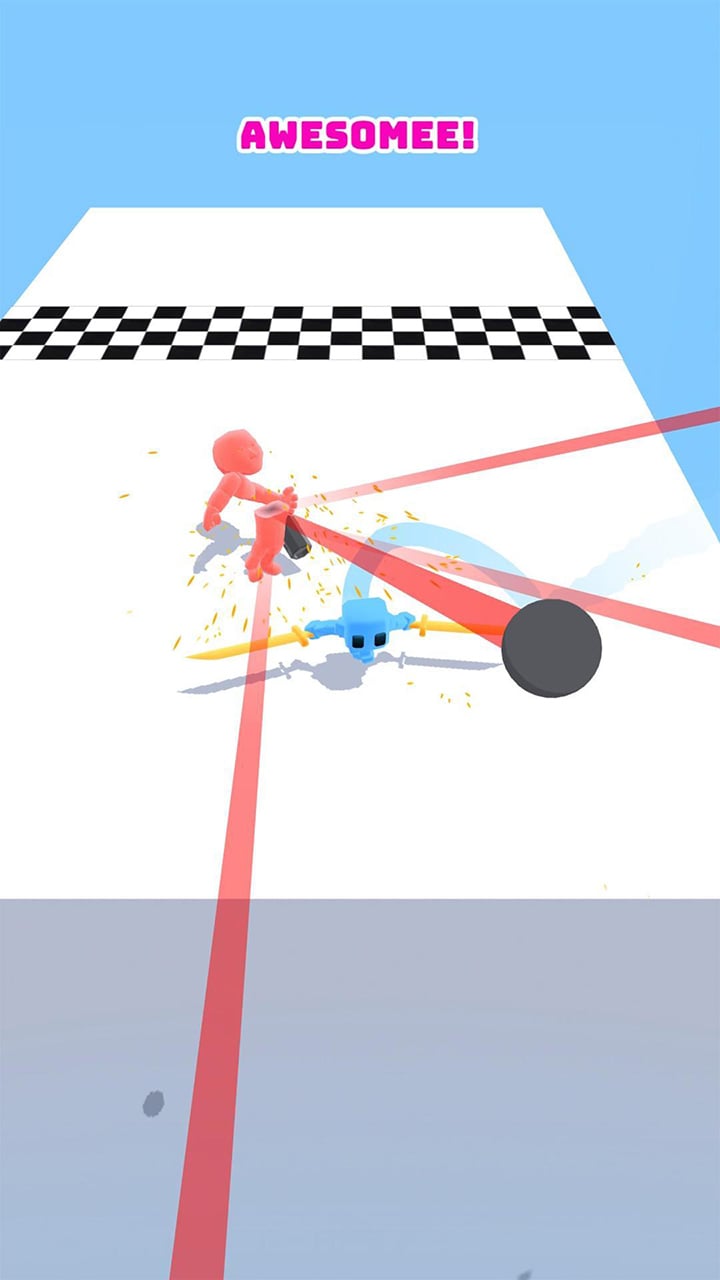 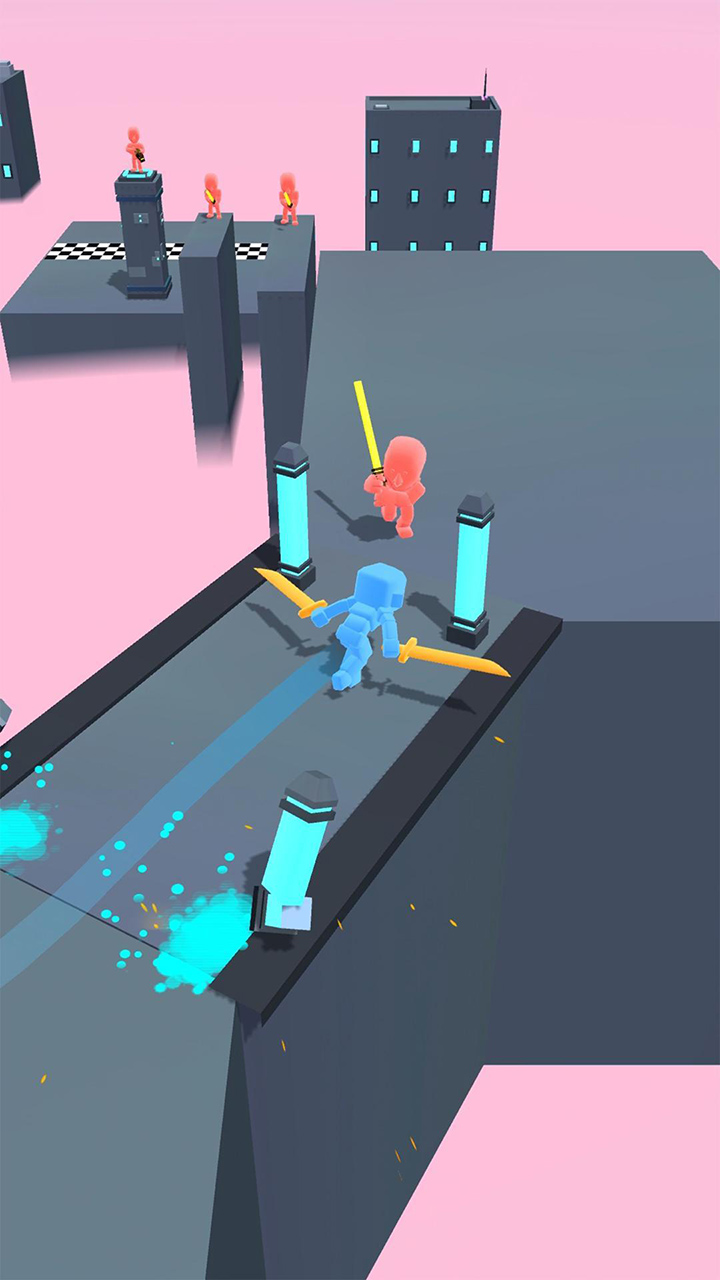 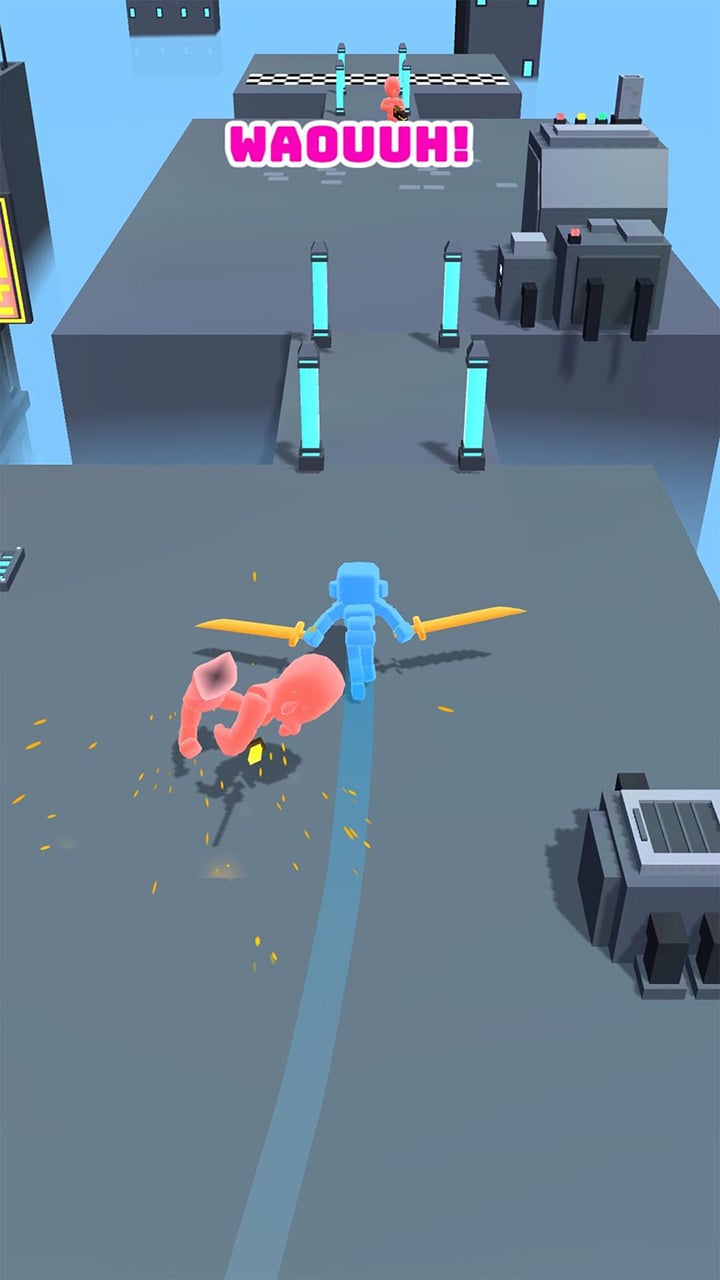 The appearance of various game props is to reduce the difficulty of the game and help you better complete the challenge. When faced with challenges, players must maintain a calm mind for a big adventure. Make the breakthrough here more challenging. In some places, players and your teammates need to cooperate closely.

Do not take it lightly in front of powerful enemies. Cooperation becomes more tacit. You can Defeat the boss and show your skills. Please dodge and slice enemies to reach the next level. Finally, full use of your speed and appreciate the slow motion of the enemy.

Stealth Master is a fun action checkpoint game. The game operation is very simple, but playing with unlimited fun. In Stealth Master, you have an evil character set, different levels of challenge. You can always be added to the battlefield with your opponent for fierce PK challenges.

You will become a supervillain, start exciting and exciting fighting challenges, and seize the opportunity to defeat all opponents. The challenges of each level bring infinite surprises. And the contents of super surprises gradually unfold, full of fun. Defeat all enemies, perfect shooting challenge, rich game activities, waiting for your participation.

The gameplay is full of infinite surprises. Try unique skills, matching methods, defeat all enemies, and win the war. You can handle various crises according to the circumstances. Then, become stronger in the confrontation, complete the mission, and take down all opponents.

You can burst out various skills in front of the opponent, defeat them all, and then get various rewards. There are many activities in the game. Every day is a different game activity waiting for players to receive a wealth of game items.

The dazzling attack methods make the whole battle process more shocking. And every attack of the player is very dazzling. The entire picture is super passionate.

The above is the content of the Stealth Master version game app carefully. There Are more exciting and rich Android game downloads on the G7 download station. Welcome to follow.

Samurai Flash MOD APK is a great game for you to relax after hard working hours. With simple gameplay, easy manipulation of the player was transformed into Samurai, moving and fighting virtually. If you love Samurai-themed role-playing games, action, download, and experience right away with Samurai Flash.

Samurai Flash currently does not have background music or sound effects in the game. The game’s graphics use light tones to help highlight the main content of the game. They design the principal character and the enemy names in a simple but extremely unique and funny shape. The game does not have too many special effects, most of which are simply moving and attacking effects, but also enough for the game to become more interesting.