Recently, Sega has revealed the new Sonic green hedgehog game. Sonic Forces allows players to customize their characters. It is the first time in the game series, the players can create a character for themselves. With Sonic Forces, you cannot use each Sonic character as before but control many characters.

Sonic Forces is an action game featuring the adventures of Sonic Hedgehog and his friends. Coming to Sonic Forces, you will experience exciting races over hills, deserts, and reach the finish line to win the highest. Explore this game now!

Sonic Forces: Speed ​​Battle is a runner game that allows players to compete against each other through a random match-finding system to increase attractiveness and competitiveness. The game also owns a series of familiar characters in the Sonic series such as Sonic, Amy, Tails, Knuckles, Shadow, and Rogue for you to collect through competing with other players.

In Sonic Forces, besides using available characters such as Sonic, Tails, or Knuckles, you can also create your character. Sega announced that information with a new announcement. It will focus heavily on the different options available to you, including body adjustments, colors, gloves, shoes, and hats. Besides, there are accessories you can use in the game such as flamethrowers or hooks. The game also provides a quick look at modern 3D action style and a classic horizontal screen 2D setup of Sonic Forces.

Sonic Forces, originally known as Project Sonic 2017, is one of two new Sonic games to be released this year. In the game, for unknown reasons, Dr. Eggman has captured almost the entire world. Sonic the green hedgehog will join a resistance force that puts an end to the dynasty of Dr. Eggman. Similar to Sonic Generations, Sonic Forces allow players to play in two classic horizontal screen styles and modern 3D settings.

Sonic Team developed Sonic Forces with the lead developer and longtime Sonic series producer, Mr. Takashi Iizuka. The team had worked on Sonic Colors and Sonic Generations. Implementation began in 2013, not long after Sonic Lost Word was born. Sonic Forces uses Hedgehog Engine 2, a remake of the engine used for Sonic Unleashed and Sonic Generations. The music of the game is played by the sound director of the movie, Tomoya Ohtani. And the scriptwriter of Sonic Forces is also a familiar character, Warren Graff, who wrote the script for the Sonic series.

Sonic Forces was first announced alongside Sonic Mania during the Sonic brand’s 25th-anniversary event held by Sega at the San Diego Comic-Con on July 22, 2017. The presence of both modern and classic styles in the tester trailer led some to believe the game was a sequel to Sonic Generations. But Iizuka later established Sonic Forces as a separate game and not a sequel. They schedule to launch the game on PC, PS4, Xbox One, and Nintendo Switch in 2017. You will join the race with two other players and try to race to the finish line to win first. In the race, not only speed, but you also need to dodge obstacles on the way. Then, collect gold rings to maintain your life if you accidentally bump into obstacles.

Besides, you can also use support items such as speed shoes and explosive bombs to attack enemies on your track and speed up the finish line. Sonic Forces has a variety of terrains as hills, sanctuaries, and city roads, and characters as Sonic, Tails, Amy, and Cream for you to choose from to play.

Win through the levels to unlock unfamiliar terrain and new characters. Upgrade for stronger characters runs faster thanks to the rings gained when winning the track, completing quests, reaching certain milestones. 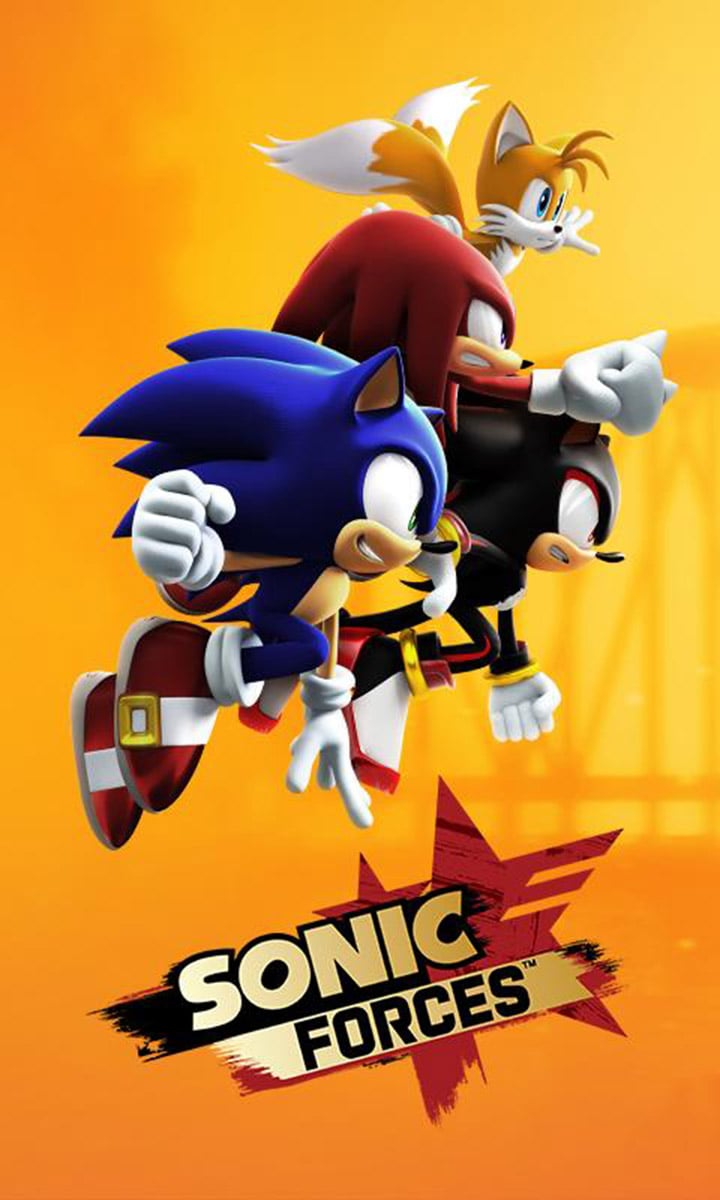 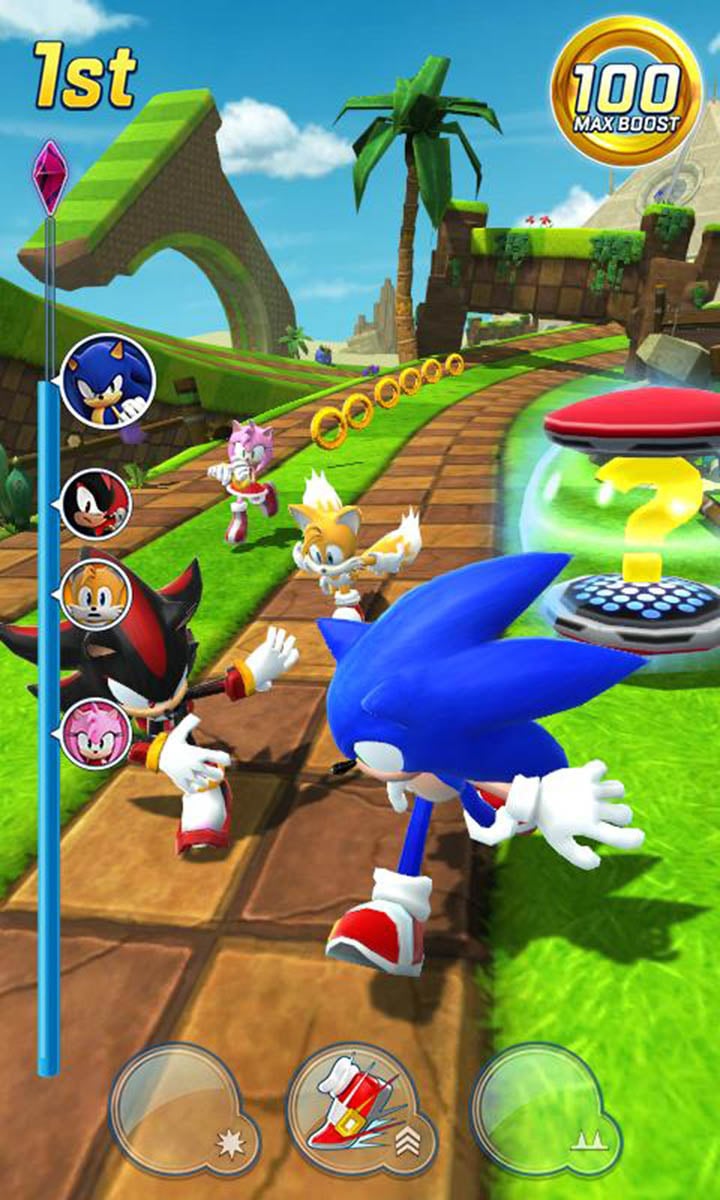 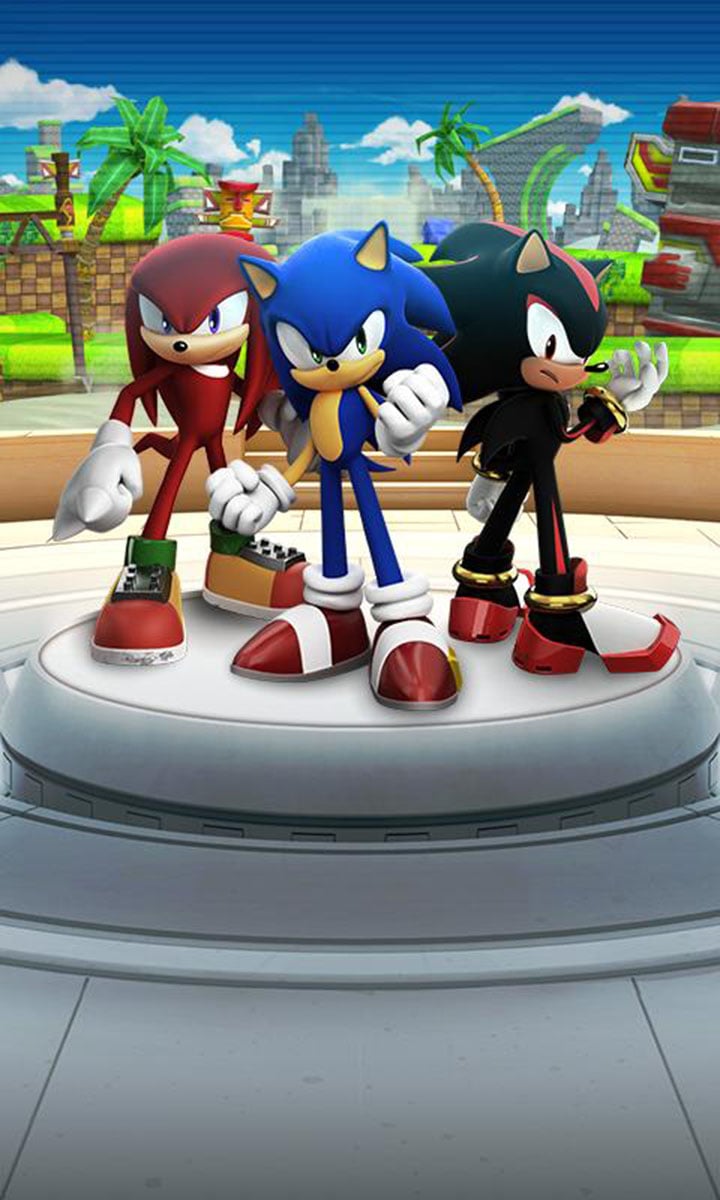 Sonic Forces have vivid 3D graphics, diverse designs for every detail. The characters in the game are also designed cutely with many types of characters. Also, the loud sound brings an exploratory sound along with various effects when collecting gold rings, speeding up, and hitting bullets. They increase the excitement for players.

Players taking part in Sonic Forces can compete in races such as Sonic, Amy, Tails, Knuckles, Shadow, and Rouge. If you do well, you can unlock new and rare characters including Omega and Vector. Then compete in every race to upgrade your character and complete quests to earn rewards. It is possible to win high rankings along with your teammates.

Sega is grappling with a rather ambiguous story which makes the legendary Sonic Runners the protagonist. With the coming of the Halloween event dedicated to him, they introduced a new character named Boo. The Japanese company is now busy apologizing to its fans for the delay. In the meantime, we tell you about Sonic Dash.

The thrilling Sonic Dash from Sega is finally available. They create this chapter based on the new comic Sonic Boom. The fame keeps the same characters and the same game format. At the level of gameplay, there are many improvements and it improves even the 3D graphics. They have also introduced a new game mode that allows you to play with three other characters.

There are also a couple of new special powers. There is a hammer for Amy and a power called to jump up and slam to attack the Knuckles. Also, the developer introduced a new game mechanic called Swing and Tilt that will allow you to take advantage of the accelerometer.

Sonic Dash has the dual purpose of playing to the Sonic Forces with the same genre. And a spin-off of the video game Sonic Boom based on the animated series of the same name whose goal was to redesign the characters by adapting them to a more Western style. Perhaps, in the eyes of the Japanese, we are seen as the fate of deformed beings considering the reprehensible design of Sonic and companions of this game.

The genre that embraces Sonic Dash is the endless runner. The game is raised third-person view slightly with three lanes and traps that invite you to jump or slide. It is the Hardlight Studio. They are the team that also brought to light the good Crazy Taxi: City Rush.

The gameplay mechanics of Sonic Forces is like popular Endless Runner games like Temple Run with simple swipes to control the character to move to avoid obstacles and collect household items. In the game, you must speed up your life. However, the difference in Sonic Forces is that you will have to compete with other players in the world in proper time, which promises to be extremely intense.

Sonic Forces has a beautiful and detailed 3D graphics background with the character lineup keeping the eye-catching design from the original. It makes the game easy for gamers to regain a feeling of childhood while experiencing the game.