It has been ten years since the first Angry Birds version was released. From a mobile game, hot-tempered birds have become a cultural phenomenon, strongly influencing other areas such as movies, TV, or advertising.

Perhaps no one using a smartphone does not know Angry Birds of Rovio Entertainment. It is considered one of the most successful mobile games of all time. A sketch of stylized wingless birds inspires the game. The first release was on the iOS platform in December 2009. After a year, the game has sold 12 million copies. Later, Angry Birds spread to other platforms, including Android, Symbian, and Windows. The hot-tempered birds are also extended to PC / Console. The publisher has also produced more than 16 titles related to Angry Birds, such as Angry Birds Evolution, Angry Birds Star Wars, or Angry Birds EPIC. One of the outstanding products is Angry Birds Match 3. If you start to get excited, let me explore it.

If you have always attached to your smartphone, you must have experienced at least one game in the Angry Birds series. From the original board to the role-playing genre to the Star Wars-based versions, one thing every player knows about the game itself is killing smug pigs.

With the classic Angry Birds game’s success, Rovio has released a lot of games following this image. Their birds of prey and slingshot have been in everything from bubble shooting to building Lego. Naturally, the wicked blue pigs are indispensable characters. And this time, Rovio continues to bring these childhood friends into the match-three game.

When it comes to match-3 games in the App Store and Google Play, you’ll immediately think of sweet candies. If you have experienced this pattern too much, you should try switching to Angry Birds Match 3. Although the gameplay is quite simple and similar to other match-3 games, the remarkable thing here is that you will meet adorable characters, not candies.

When you enter the world of Angry Birds Match, you will play the famous “crazy bird” fighting the famous pigs in the Angry Birds series. The game keeps the original lovely graphic background with amusing characters.

Each battle in the game takes place randomly and is built in the match-3 genre (similar to the diamond game). Your primary mission is to rescue more than fifty young birds from the evil pigs. When playing the game, you will have Bomb, Red, and Chuck accompanying you. They are items that increase your power as you progress through difficulty levels.

You must earn energy to activate the ability to attack by matching birds of the same type together. To activate a particular skill, the player will have to combine four or more birds of the same type. Each match will take place for a certain amount of time, and then the birds will fight with each other depending on the attack and defense stats you collect.

During the match, players can see the great accumulation points and combo effects, which has never been seen in the previous series. Your combos often make your opponent dance happily, create bubbles to block your score, and reduce your playing time. Before the time pressure of a match-3 match, you will be forced to watch the first match and wait for the birds to fight each other without controlling the match like a real RPG, except when determining when my character’s HP is depleted. Therefore, you must equip more weapons to improve the strength of the “crazy bird” with a hat and armor. Each item also has its attributes and increases depending on its rarity. You can search for new equipment through rewards after the match or purchase in the shop. If you win the battle, you will earn a lot of valuable prizes. Besides, according to the story missions of Angry Birds Match, you also gradually open up characters with different powers. It can be said that Angry Birds Match brings an entirely different look to the games of the same series. The gameplay in the game also becomes especially attractive while retaining the inherent difficulty that is entirely suitable for Angry Birds fans. 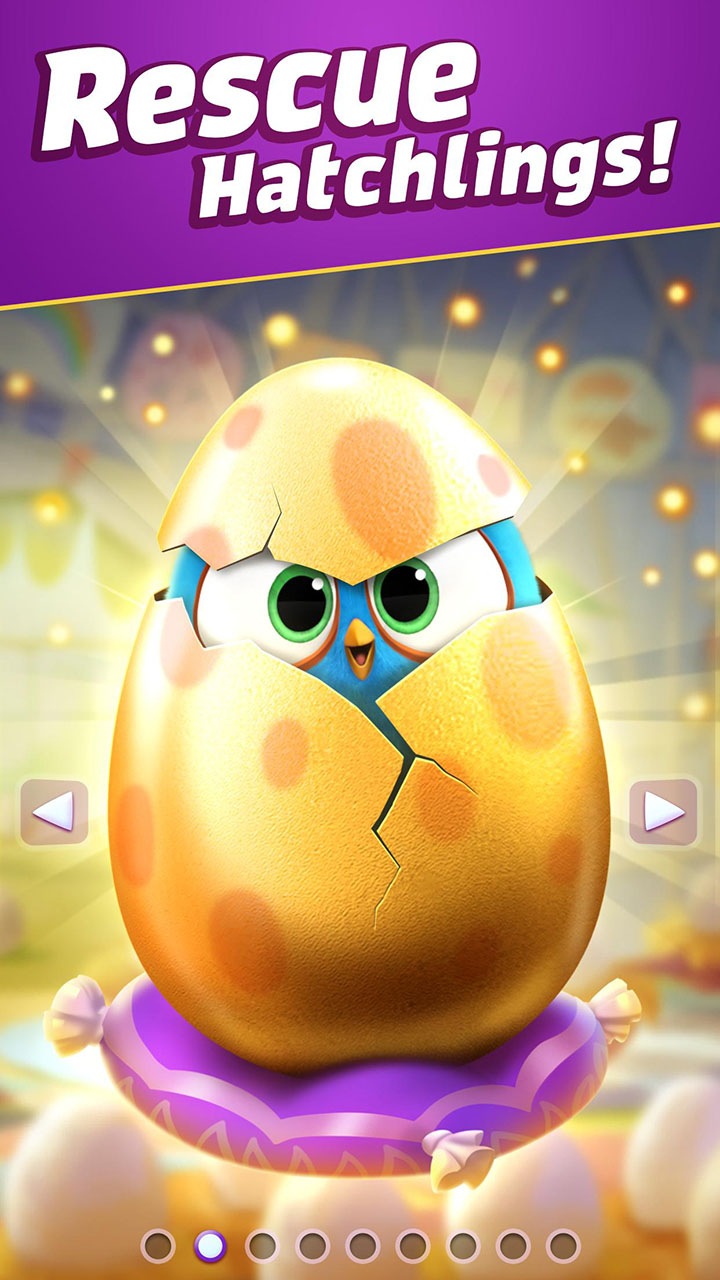 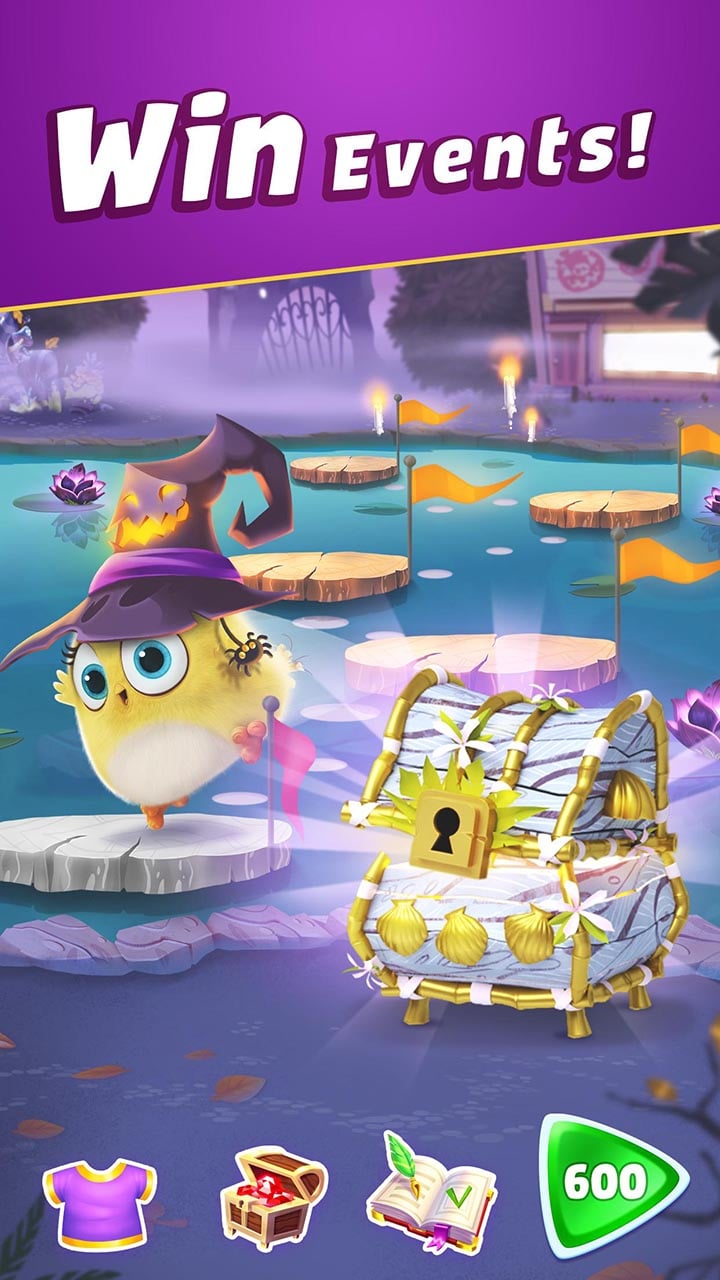 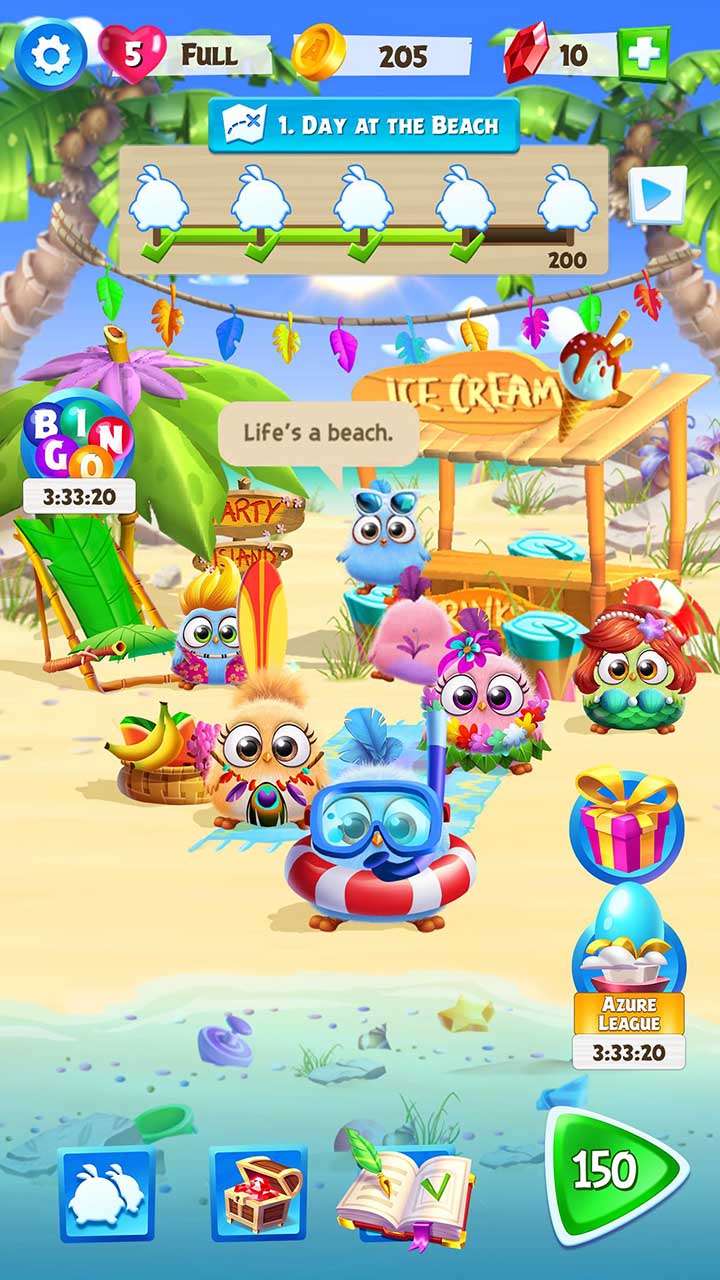 One of the reasons why Angry Birds Match three so easily conquered the world is its accessibility level. Developers have made sure that new players do not find it challenging to experience. They also have to make sure the game is suitable for seniors, young people, and children. Age factors and the level of intelligence of the player does not affect the gameplay. It meant that the developers had to make it so that everyone could make it through the levels in Angry Birds Match 3 with a little bit of thought and persistence. This factor helps the game increase relaxation and reduce stress for players every time they pass a level.

However, simplicity is also a double-edged sword. If Angry Birds Match 3 is too easy, people will quickly get bored. To increase addiction, the developers of Angry Birds Match 3 have made the game have difficulty increasing gradually, enough for players to build their tactics and methods to use each note. Thanks to that, the player will frequently be caught up in the feeling that he just struggled to pass a level and wants to continue playing to the next level. Angry Birds Match 3 looks simple on the outside, but each game screen is carefully planned and designed to attract the player as much as possible.

Level Up Easily with Flexible Playtime

Another attraction of Angry Birds Match 3 lies in the game time. Players are entirely free to play for a long or short time as they like. It means gamers can take advantage of a bit of time while in line, during lunch break, or while riding public transport. It is also a strength of mobile games, hitting heavily on customers who do not have much time to play games.

Even if the player can only take advantage of one level’s experience, Angry Birds Match 3 still has enough satisfying elements. All visual and sound effects are fascinating, no matter if you are the most demanding gamer type. The feeling of overcoming a problematic screen, destroying the green pigs, destroying obstacles in Angry Birds Match three is exciting.

From a scientific point of view, the activity of dopamine (the vital hormone in the brain related to happiness, motivation, and memory) in the brain always inspires us to find out what happens when shooting the birds. After that, players receive rewards from the game, though not continuously, but regularly receiving rewards makes gamers happy. It makes the happy hormone more created. Gamers will undoubtedly want to continually stay in Angry Birds Match 3 to satisfy the curiosity of what will happen on the next screen while also have a happy feeling.

Besides, Angry Birds Match 3 also has many other exciting features that you should experience: 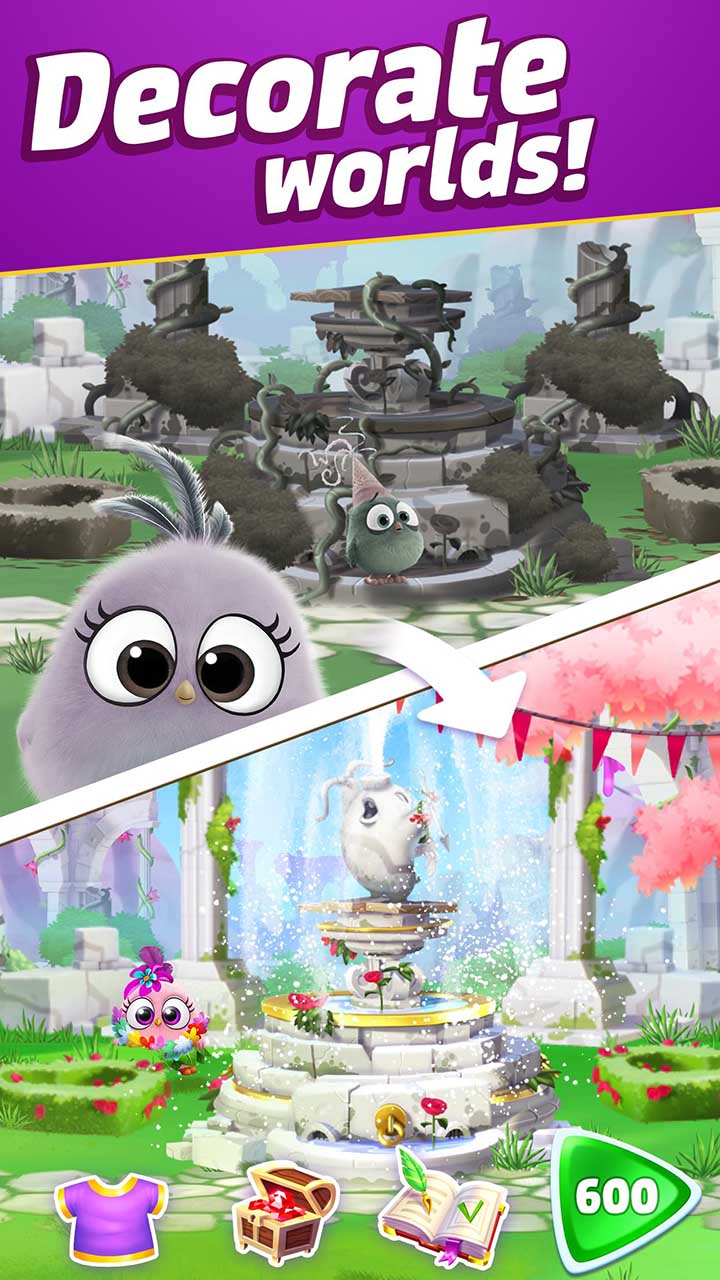 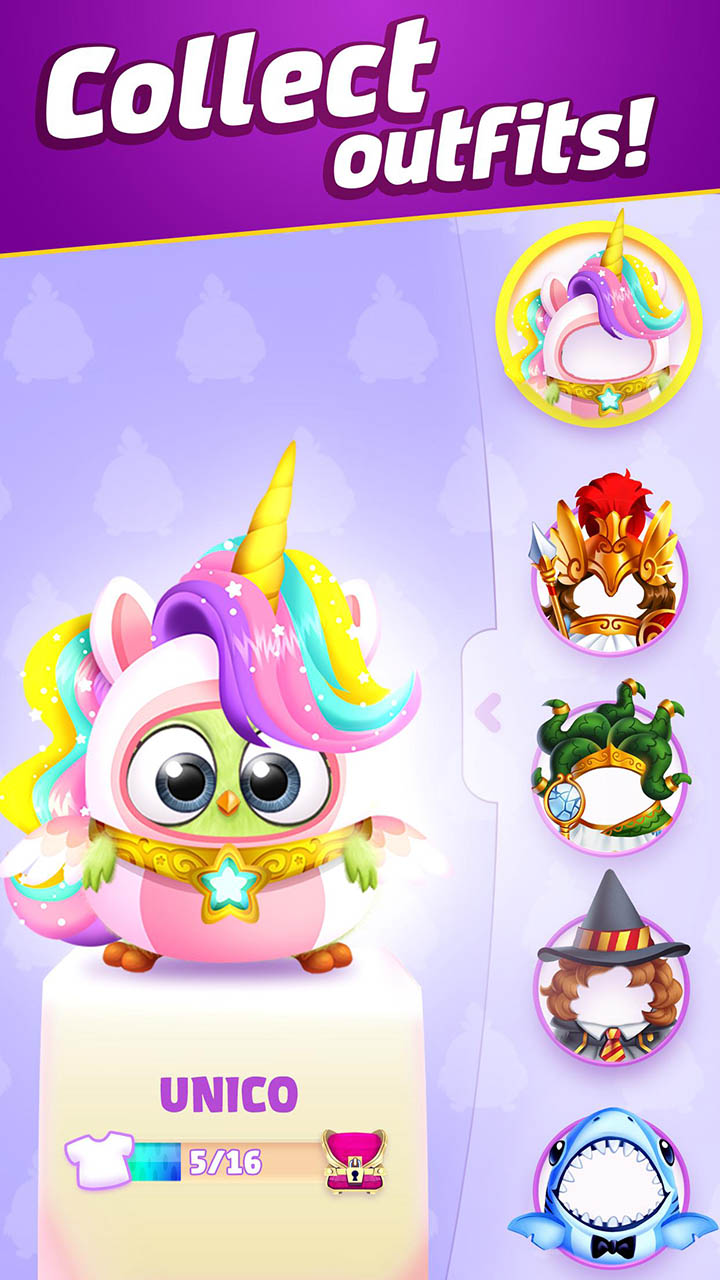 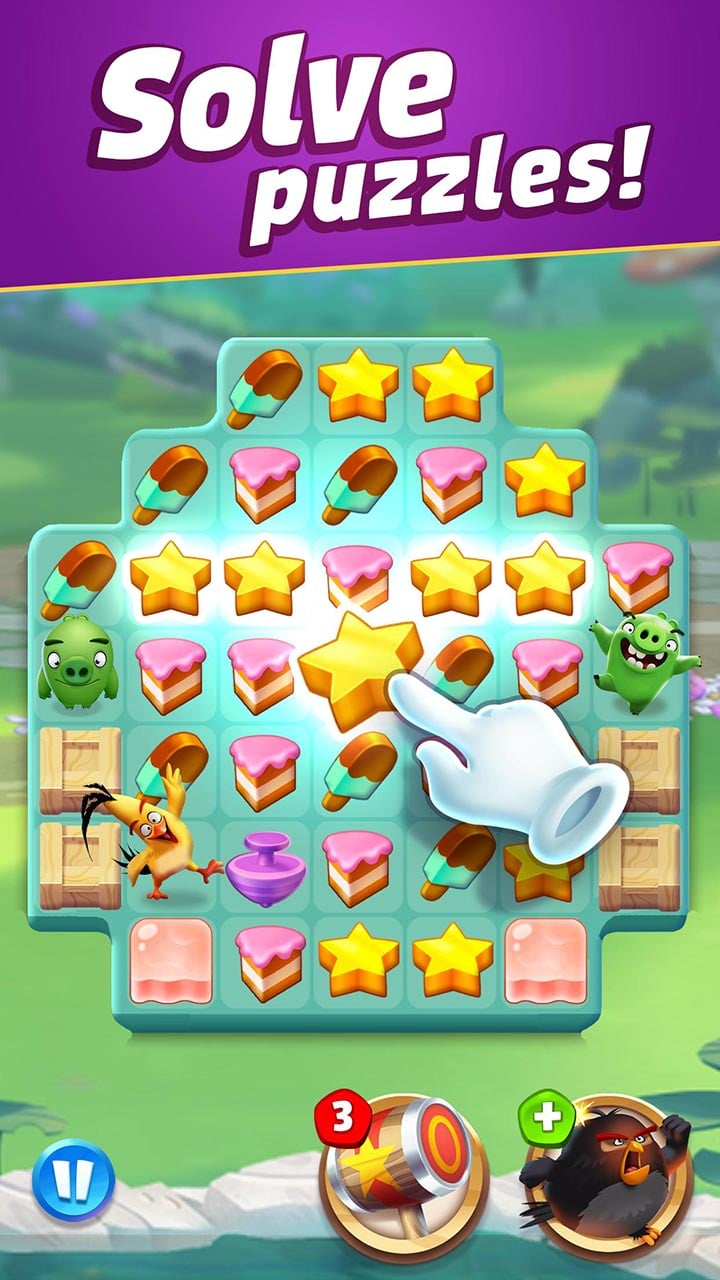 Find Ways to Get Gems and Use Them

The keys to high-end chests will have a value equivalent to the gems. When you own these chests, you can energize, buy boosters, or use additional moves. You can quickly purchase gems from the in-game store. Besides, gems also appear in chests.

Coins are An Essential Factor

You can use coins to own the necessary outfit for your chicken collection “Hatchling.” Furthermore, after you have used your key, you can use coins to open the central chest. After each level is completed, the reward the game has for you will be coined.

Besides level rewards, the game will give you additional rewards based on your existing outfits. Depending on the level of rarity, each outfit will correspond to a certain amount. If you want to see how much coins you get when you are rewarded, you can go to the “Collection” menu and navigate to the costumes.

Make The Most of The Differential Amplifiers

In Angry Birds Match 3, you will have three companions to help you through the levels are Red, Chuck, and Bomb. Make the following choices to be able to create birds on different levels:

Selecting four shapes will help you create Red. When it exercises its power, it removes a single row or column of your choice.

When you select the year in one corner, you create Chuck. He will fly in four different directions and help you destroy.

Besides, the bomb is also an overwhelming force. You choose five shapes, and it will create a bomb. They will help you to delete three rows or columns.

If you want to get an edge right from the first levels, buy a bird amplifier and select gems from the level selection screen. The game gives you a comfortable choice between Red, Chuck, and Bomb. But you can also choose all three. Besides, dragging the bomb’s image in the lower right corner of the screen will give you hints to buy new bombs from all levels.

What Tasks Do I Need to Complete in The Game?

Angry Birds Match 3 has three main types of missions that you should pay attention to Treasures, Jungle Trails, and Big Dig.

First, I will talk about the Treasure event. When participating in this event, players will have only one life and must complete five levels. If you have not completed the level yet and failed a level, you will have to start over. The treasure in the last level contains many attractive rewards. Once completed, the system will give you a gift.

The Forest Trail event is also exciting and attracts players. Here, you will walk on the forest path to find treasure. Every time you want to go one step further, you have to pass a level. This event is more accessible than the Treasure one in that you do not have to start over if you lose the level. You can continue where you left off.

Finally, the Big Dig event is slightly different from the two events above. You have to get a shovel for Chick. After you have completed the levels required by the game, choose a place for your chicks to dig sand. The more chicks dig, the more keys you need to open the reward chest. But don’t worry, even if you don’t get the key to the place you choose, you will still get other rewards like boosters or coins.

What If I Want to Change The Costume of The Chick?

When you want to change the outfit of a chick, please click on the Collection menu. Then, choose “chick” and choose your desired outfit.

What Do The Stars on The Chicks Mean? How Do I Get Three Stars?

In addition to the necessary costumes, Angry Birds Match 3 also gives players exclusive outfits with many stars available. However, they are rare items. The more complicated the costumes, the more stars there will be. They are usually found in high-end and royal chests. You can often open chests to receive.

Overall, Angry Birds Match 3 is an exciting game that any player will find interested in. Although it has simple and familiar gameplay, the graphics and regularly updated quests are the plus points of this game.

If you are looking for a game for entertainment after hard work, then Angry Birds Match 3 is a great choice. Hopefully, through this article, you can understand more about this game and are ready to accompany the cute birds.