Ball Blast game is a ball shooting game to break big color blocks to smaller blocks and destroy them. It is a simple game that is very easy to grasp. However, Ball blast is also addictive gameplay that gives you relaxing moments. It is best for a quick break between meetings.

As you can see, it comes with 2d graphics, which is so lovely that suit even young children. Let’s learn more about this cute game with the following information:

As you could have guessed, Ball Blast is merely a relaxing game, which can only provide you quick entertainment activity. Since it is not a simulator game, there is no story or concept inside. We think it is realistic because no one wants to read a long story if they have only a few minute breaks. Hence, Ball Blast focuses more on the user experience than the attractive concept.

Although Ball Blast is a simple-designed game, it still has some fantastic features that make you happy with it:

It has Simple Gameplay for Every Player

Ball blast has simple gameplay, which is even suitable for 3-year-old children. Everything you need to do is move the cannon on the bottom of the screen to the left and right to hit the color balls above. At the same time, you must avoid letting the color ball hit the cannon. If not, you fail.

That is it! All you have to do is touch the screen and move the cannon left and right. When the color ball is destroyed, the gold coins will splash out, and you need to move to collect as much as possible. There is nothing special about this game. But its simplicity turns out to be the addictive features. 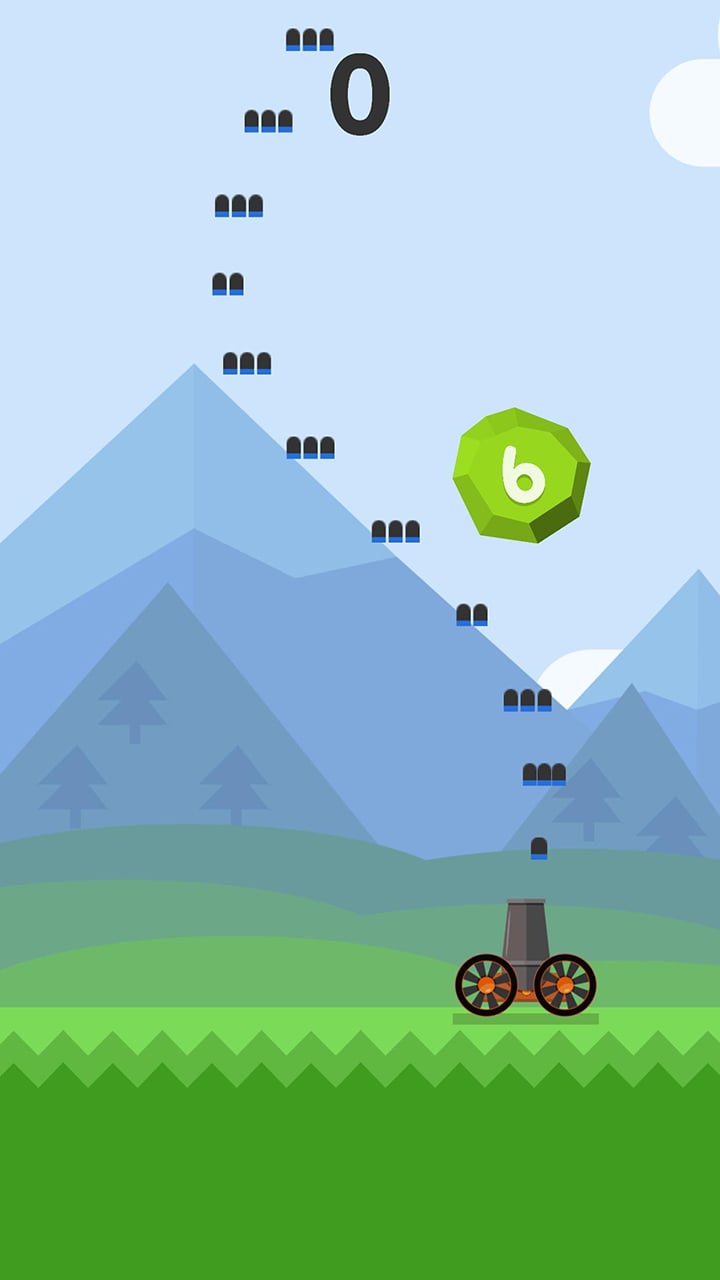 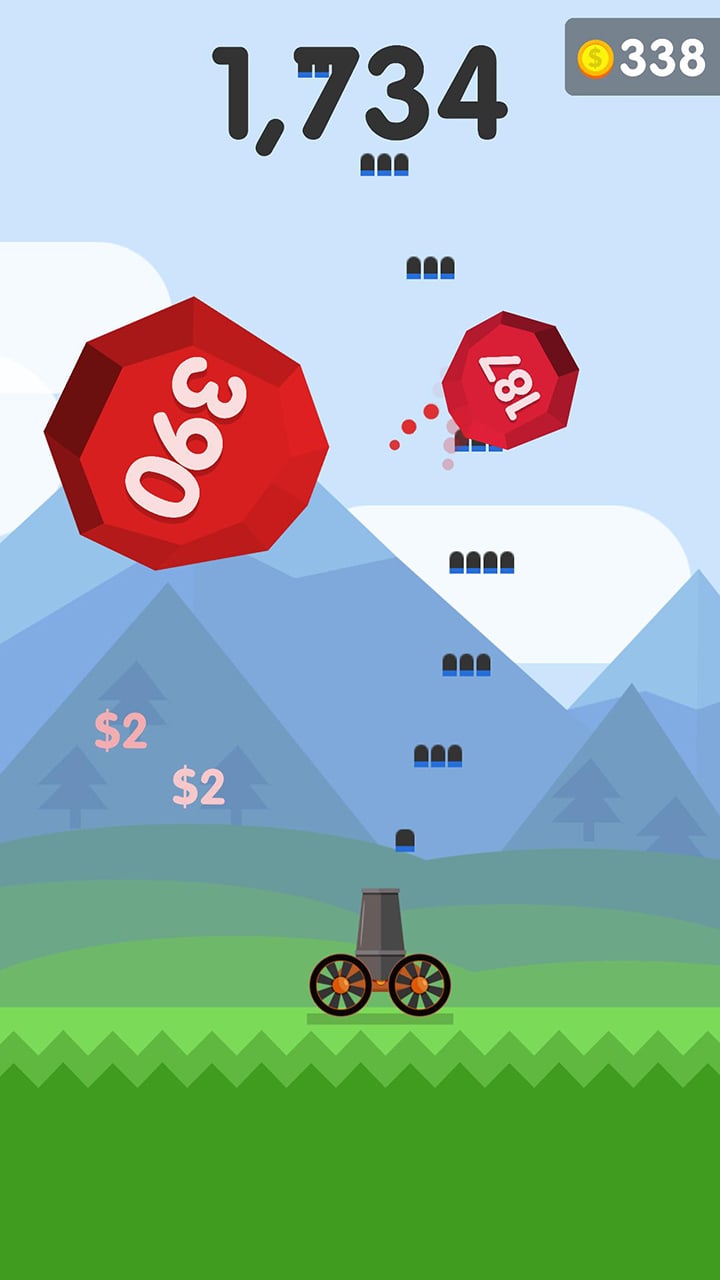 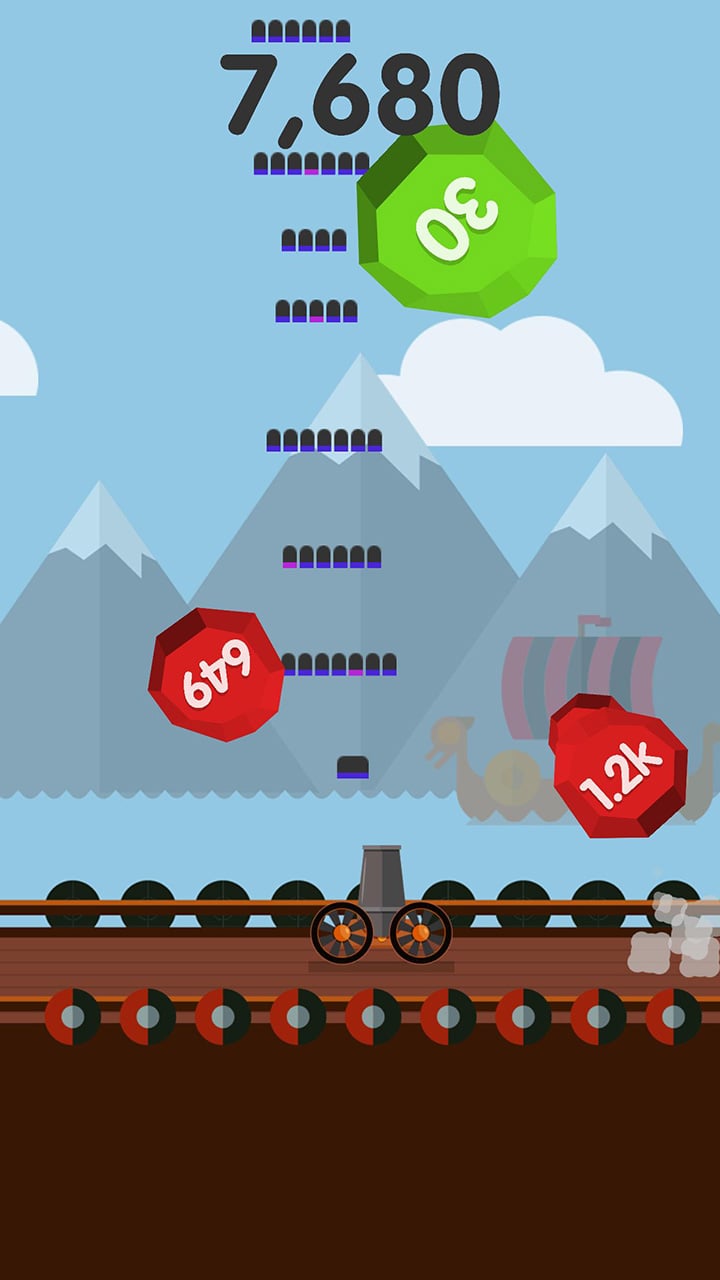 Only One Game Mode

This game goes not to have any game modes. It has only one game mode. All the game is only about shooting the ball and collecting gold. Therefore, it is not a game for you to play in the long run because it will be a little bit boring, especially for adults. However, it is very suitable for kids and children under six years old.

It has Suitable Difficulty Level

It is not as tricky as Angry Bird to get the score. But it is also not as simple as Sand Balls. The color balls will be numbered according to the number of levels that you are in. And it also decides the difficulty of this game because it will take longer to destroy the bigger balls.

For example, at level 1, you only need one shot to destroy the number-one ball. However, at level two, after one shot, the ball will separate into two number-one balls. And you need to take two more shots to wreck the ball.

Similarly, at level 3,4,5,6 and more, you will need to take more shots and more time to delete bigger balls. Besides, the more balls there are, the more risk that you will be hit and lost a life. And that feature will make the game more challenging and exciting.

Also, with each level, you will see different background design. This feature is almost the same as the Picachu game, which releases unique pictures when you finish a level. And the background leads us to the following part. 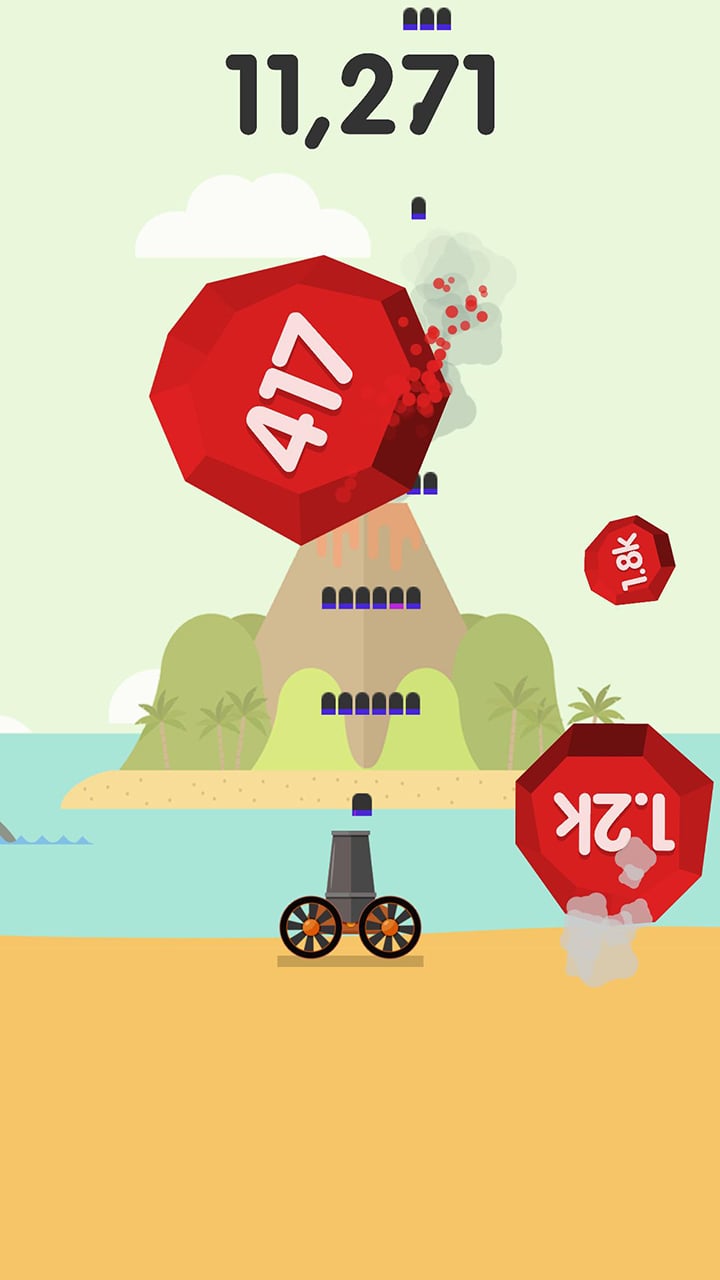 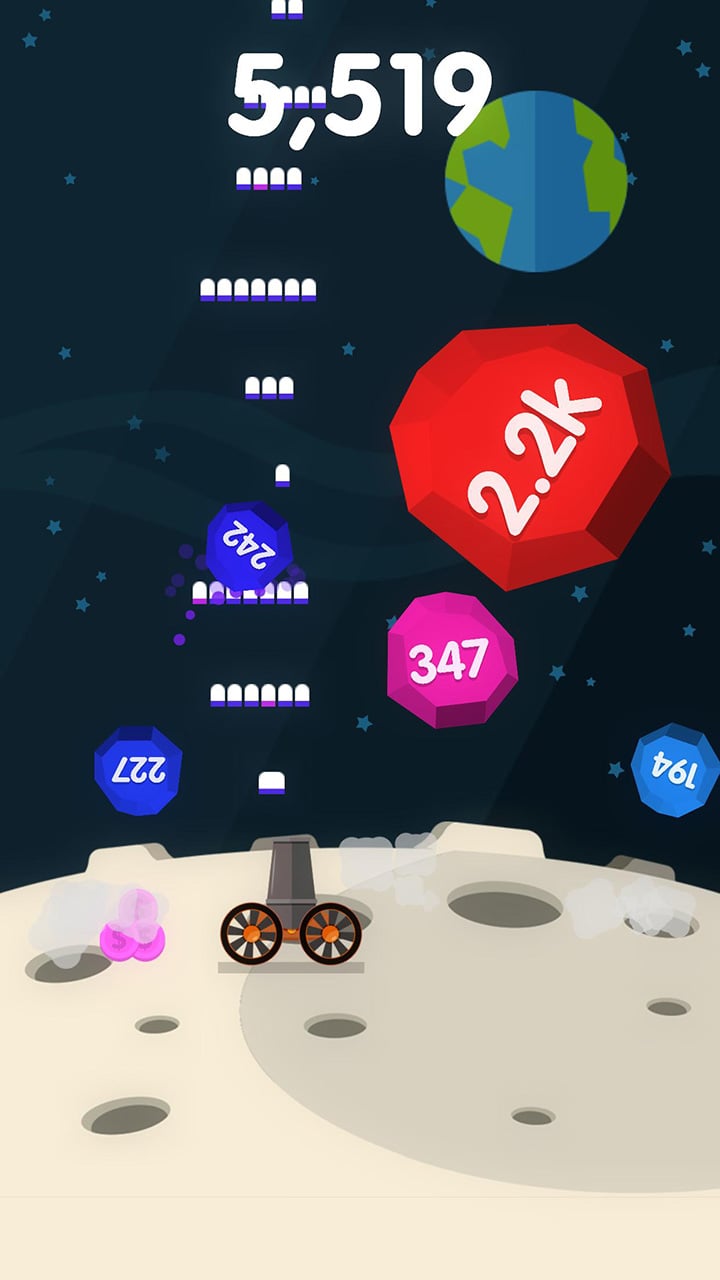 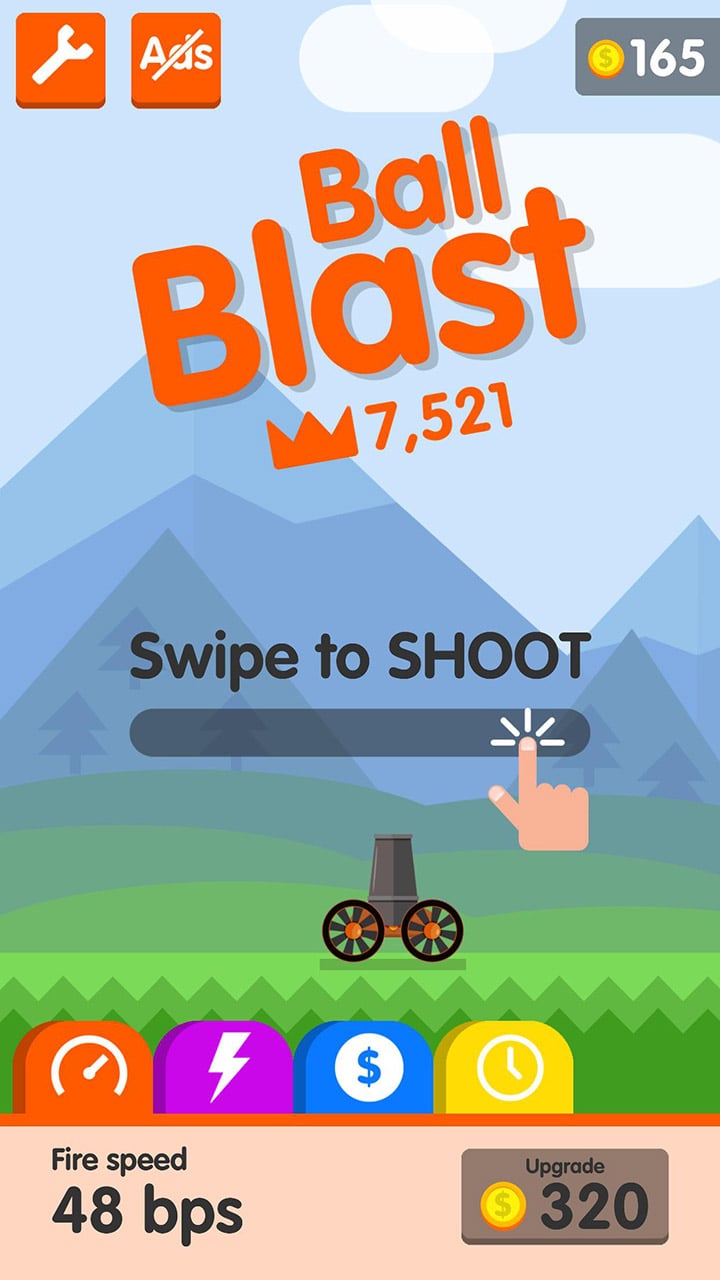 The Only Shortcoming: Too Much Advertising

If you pay for this game, you will not have to see so much advertising. But most people do not ready to pay for a game in the first trial times, and it means that you will always be interrupted because of the advertising.

This game is a 2D game. And it means that its graphics are down to earth. The balls are monochromatic and different from small to big balls. Also, the background of this game is subtly designed with pastel colors.

Moreover, the bouncing movement of the ball when hitting the grounds will make you feel satisfied. Besides, the effect of bouncing gold coins is also fascinating, especially for children.

All the movements in the game are very smooth without any snatch or mistake. This feature is a big plus because it allows you to have a satisfactory experience with the game. When playing a game or watching a music video, it is very annoying when you have to pause or your mobile stops because of the software mistake.

Secondly, this game has no sound effects. Instead, you can only choose between two modes: silence and vibration. It is okay when you are looking for a few relaxing moments on the bus, subway, or office. But the absence of the sound makes it much less attractive.

For example, the Dinosaur Egg Shoot comes with a beautiful sound when you make the right shot. And it will encourage users to improve their shots and make a point. Sound is a significant shortcoming of this game, and we hope that the producer will improve it in the next versions.

Overall, we think that the Ball Blast is an exciting entertainment game for quick playing and relaxing. It is the best choice for you to have some relaxing moments between two meetings or two classes. With the colorful balls and lovely graphic, this game will bring relaxing and fun movements for everyone to play.

And yes, this game is the game for “everyone” but not the game for the professional gamer. This game is only for relaxing, and if you want more challenging or better visual experience, it could be the last choice for you. If you are not, let’s try and share with us your experience!