The founder designs Hyper Heroes in a vertical screen style that is very suitable for gameplay and combat. Besides, the chibi character is adorable but also very fresh and has a unique temperament for players to join their favorite squad.

Hyper Heroes also owns a vibrant and diverse hero system, each with its unique skills and position in the squad. With Hyper Heroes, the strategy depends not only on the arrangement of the generals in the formation but also on the correct calculation through the drag-and-drop mechanism commonly found in billiard games or shooting balls.

Yes, can you imagine one day seeing Yasuo and Ezreal fighting along with Invoker and Lina? If you are wondering about the generals’ actual combat power in DotA 2 and League of Legends (LOL), you will get the answer right away.

Because in Hyper Heroes, not only the character’s appearance but also it recreates the skills very close to the original generals, giving simple combat phases but still playable like in MOBA matches. It only takes a few seconds to defeat the opponent and be the winner.

Thanks to the familiar game development direction, players easily grasp the pace of the game from the beginning. The players need to study the combat mechanism to create many creative and powerful combos, and Hyper Heroes players will experience a cheerful, dynamic, and equally challenging atmosphere.

Developed by 90KM, this new game belongs to the novel Sling Shot genre on the mobile. With simple gameplay, easy to manipulate, and impressive, Hyper Heroes gather hundreds of general cards from MOBA games like League of Legends (LOL) or DotA.

Besides the original version released in the domestic market, this mobile game is being published in English and Japan. Join the game; players will be active in battles by touching, swiping, and shooting.

The most attractive point in the Hyper Heroes that is highly appreciated by players lies in the aspect of graphics. With beautiful chibi-style character designs commonly found in Korean-origin games, players will conquer the challenges in their journey.

Besides tactics to build a reasonable lineup, gamers will need to consider recruiting the right Hero. The inexpensive Power upgrade is also an advantage for players to be proactive against strong opponents. Hyper Heroes also allows players to interact directly with friends by competing alongside the option of training with the machine battle mode.

The rampant emergence of card-based, turn-based GMO games has gradually made this genre become less attractive products for players. The appearance of Hyper Heroes is like opening an alternative path, a wise choice for GMO gamers. The game development department knows how to innovate and avoid the drawbacks of the predecessors.

Talking more about the gameplay of Hyper Heroes, as you know, the game was the rebellion of the Slingshot genre in 2017. The game genre “drag-drop-shoot” with many legendary game names in the past has not been well exploited until when Hyper Heroes came out.

Besides the drag-and-drop gameplay that requires high tactics, the game has role-playing elements for gamers to increase the quality of generals. They can also bring their favorite generals to adventure, kill bosses, and overcome the enemy, do not forget to defeat the opponent respectfully. So, we can also consider this an experience and role-playing game similar to LOL or DotA 2.

By combining the gameplay of the general card game, strategy, and turn-based, it creates a unique character for Hyper Heroes. The control mechanism is no more extended auto for the character to fight as before. Instead, it is a drag-and-drop feature.

Typically, the assassin can pierce the defense. The gladiator general has the skill to bounce and perform many consecutive attacks on each enemy. With this feature, Hyper Heroes will help players interact better and calculate reasonable tactical paths for each case.

Thanks to the high balance, it is likely that the multiplayer mode in Hyper Heroes will shine. The game has multiplayer items that support up to four players at the same time. You can take part in boss destruction, or PK with friends in a real-time format, supporting both general ban and pick. 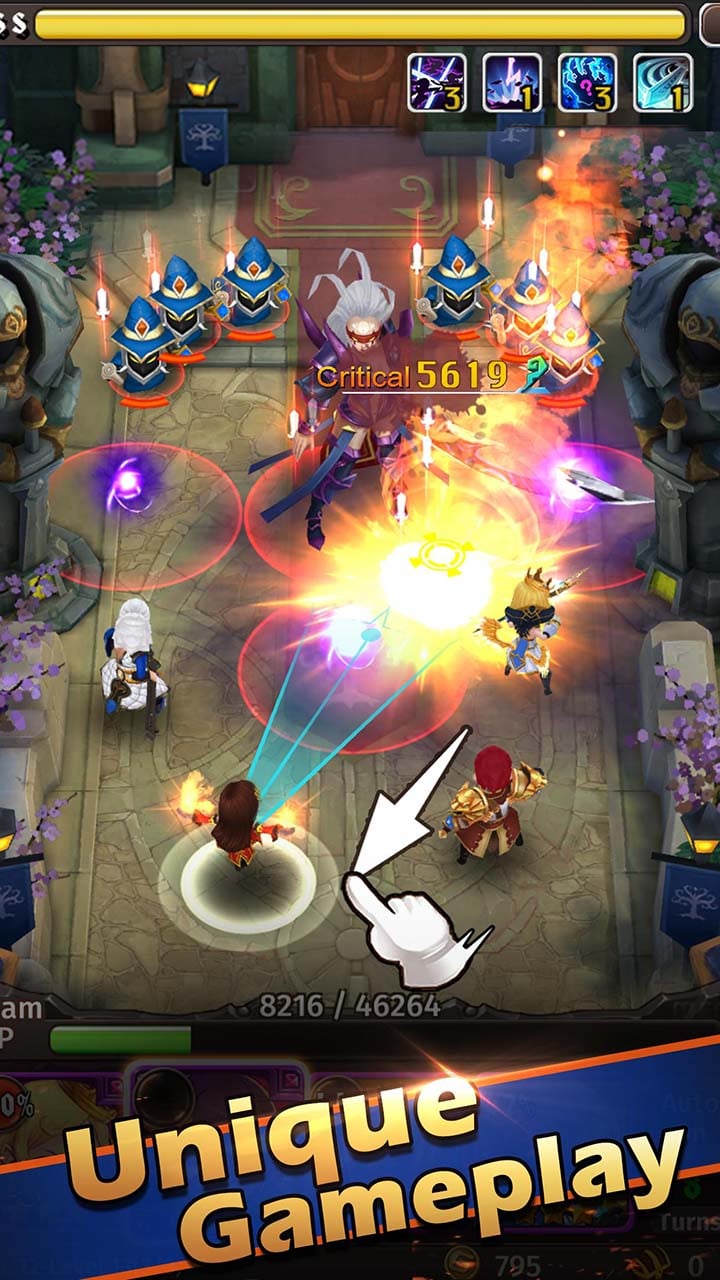 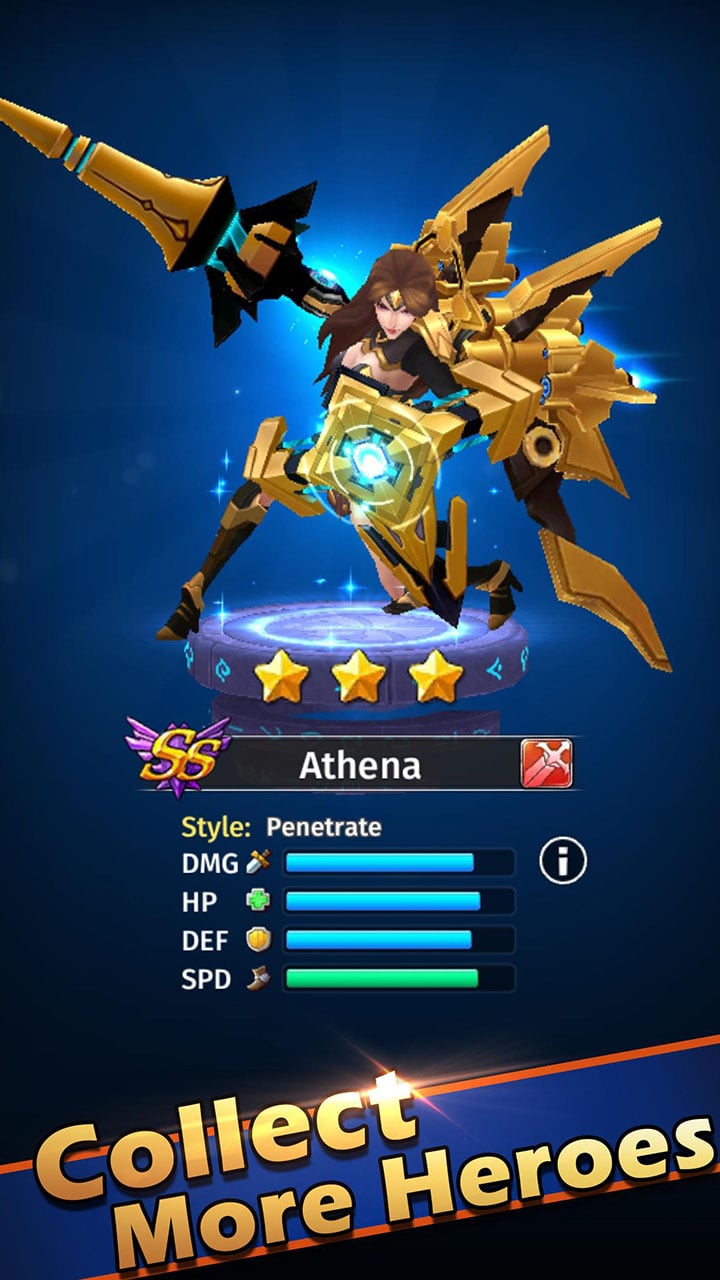 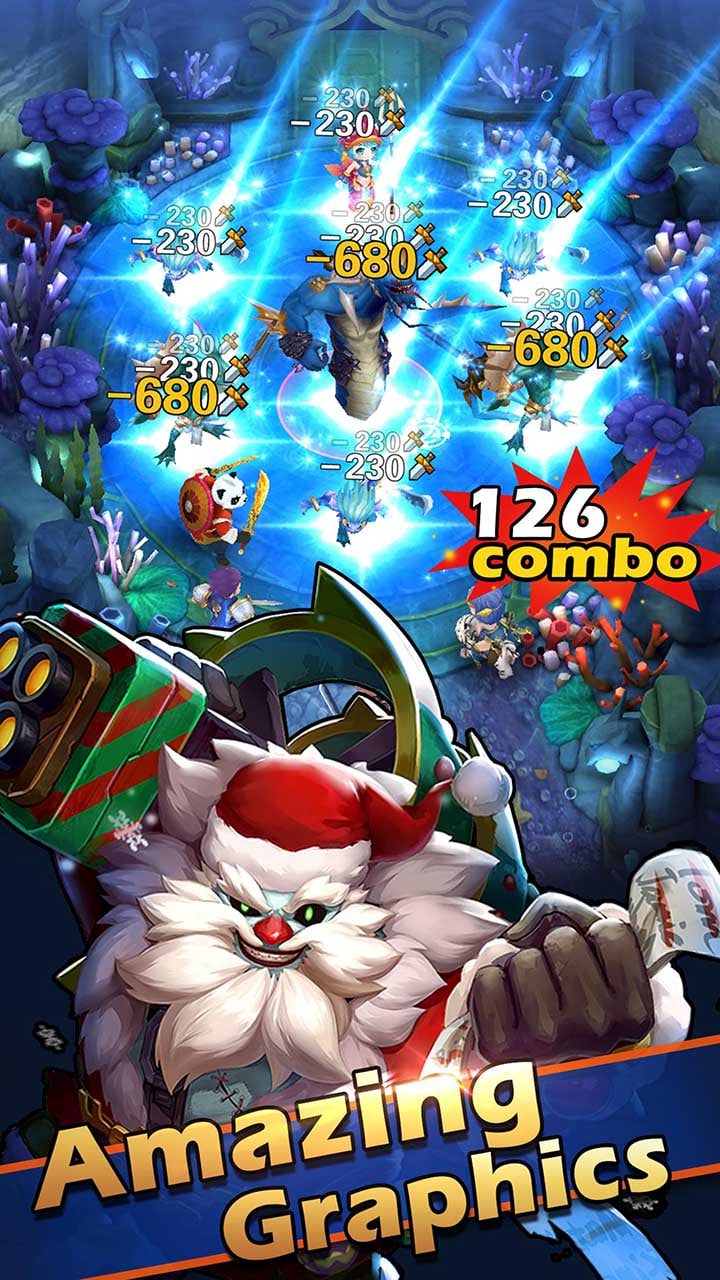 Hyper Heroes is the same as other general role-playing games for starting the game with a series of missions – from there, summoning your new heroes in a four-person lineup, and fostering a more robust list by leveling up and increasing skills. Here is our assessment of the game.

Starting the game is a fierce battle between demons and humans. Players will encounter very familiar characters, coming from different sports, not only League of Legends and DotA 2. Typically the appearance of two brothers Dante and Vergil from the super product Devil May Cry.

The first impression is the graphics in the game. They design Hyper Heroes in a vertical screen style suitable for gameplay and combat. Besides, the chibi character is charming and very relaxed and has a unique temperament for players to join their favorite squad.

Especially with eye-catching, majestic skill effects, and fast moves, players can feel the theatrical and charismatic action of nature. It challenges the player in each control of the characters’ movements or uses tactics.

It shows the image in the game in 3D with significant details. The characters are impressively shaped, and the boss on each map is massive. In particular, Hyper Heroes works very smoothly and does not encounter lag or lag as before.

Skill effects are magnificent. Majestic and realistic character movements are sharply reproduced. Besides the graphics, the sound is also a plus point of Hero Combo. We can say that the game has completed when integrating quality background music. It does not repeat soundtracks in each separate map.

Hyper Heroes also owns a prosperous and diverse hero system. Each character possesses unique skills and positions in the squad. With Hyper Heroes, the strategy does not depend on the layout of the match. It mainly focuses on accurate calculations through the drag-and-drop mechanism commonly found in billiard games or shooting balls.

However, in Hyper Heroes, it will be more tactical to apply the combat mechanism. It will control how to create the most combos, creating the most substantial damage to end the enemies quickly.

Although the drag-and-drop movement has been pre-simulated so that players can easily observe the moves when choosing the direction of attack, launching attacks directly on the weaknesses of the identified target is still the most critical point.

The player can also control so that the team members cooperate, combining combos to increase the damage the enemy takes. Thanks to that, the strategy in Hyper Heroes always has an unpredictable transformation, not like a regular match. From the basic combat instructions, players can rely on that to create their unique modes of movement, combine their combos, and surprise opponents. 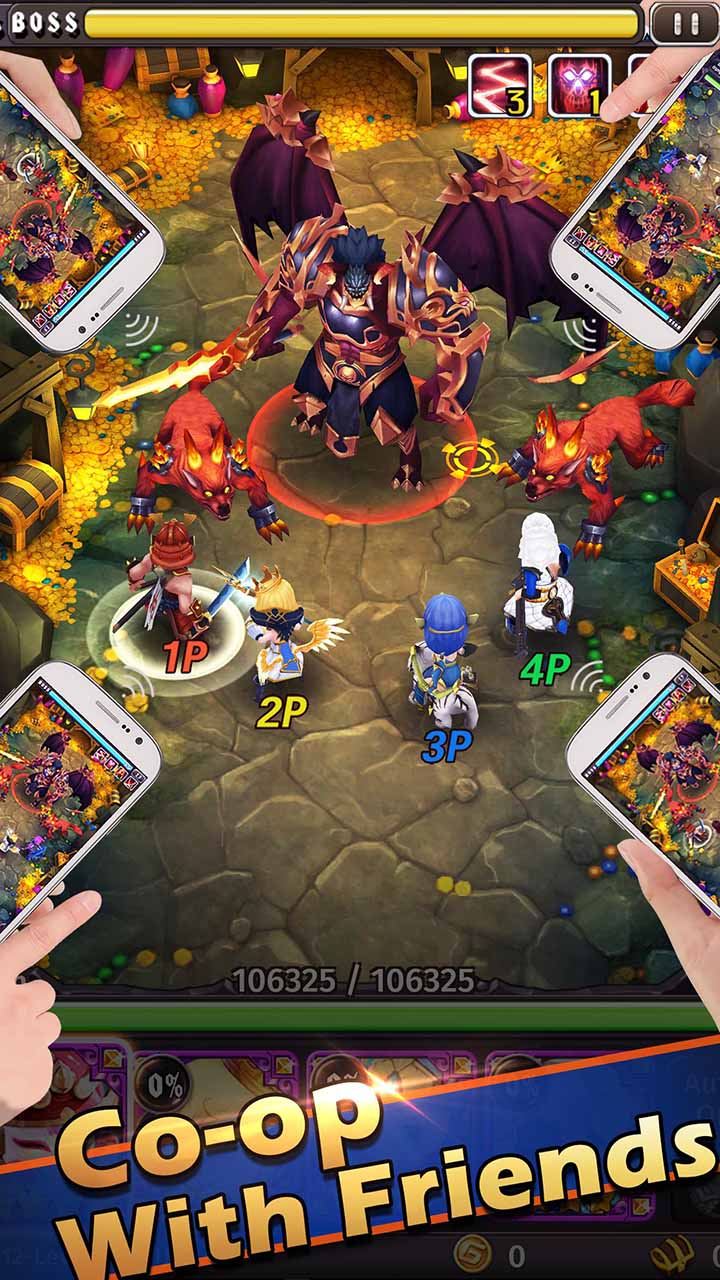 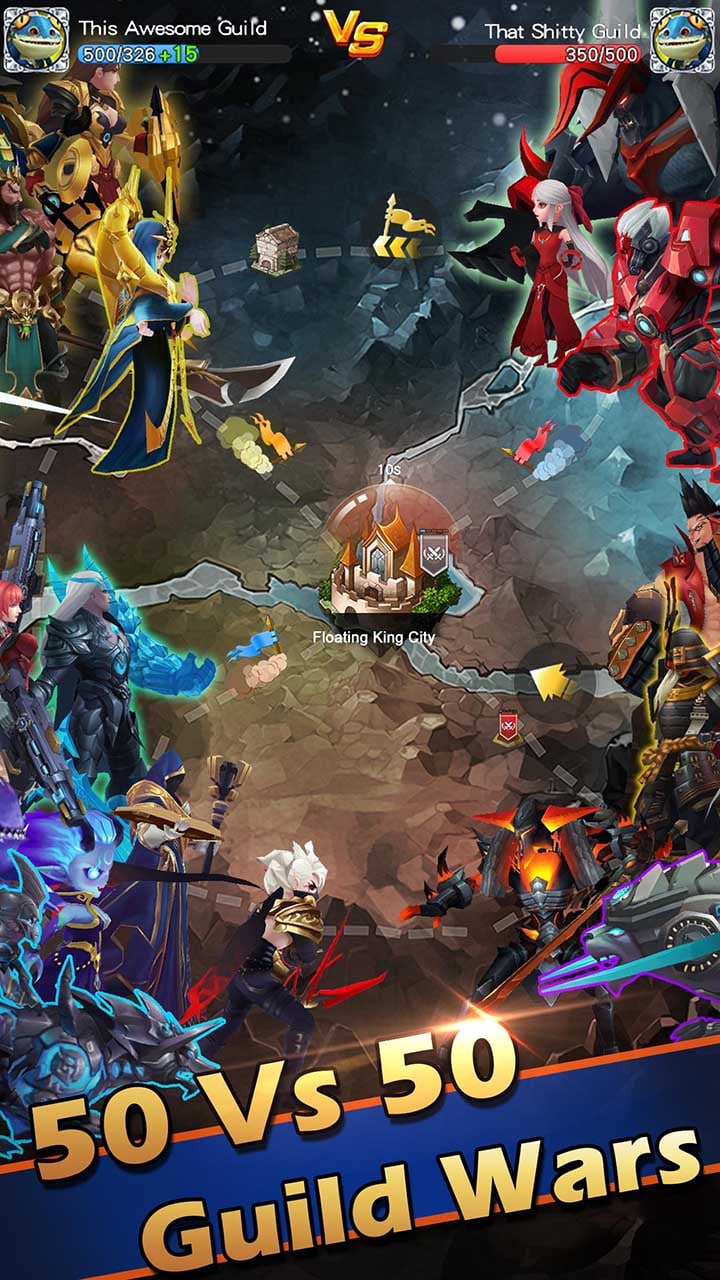 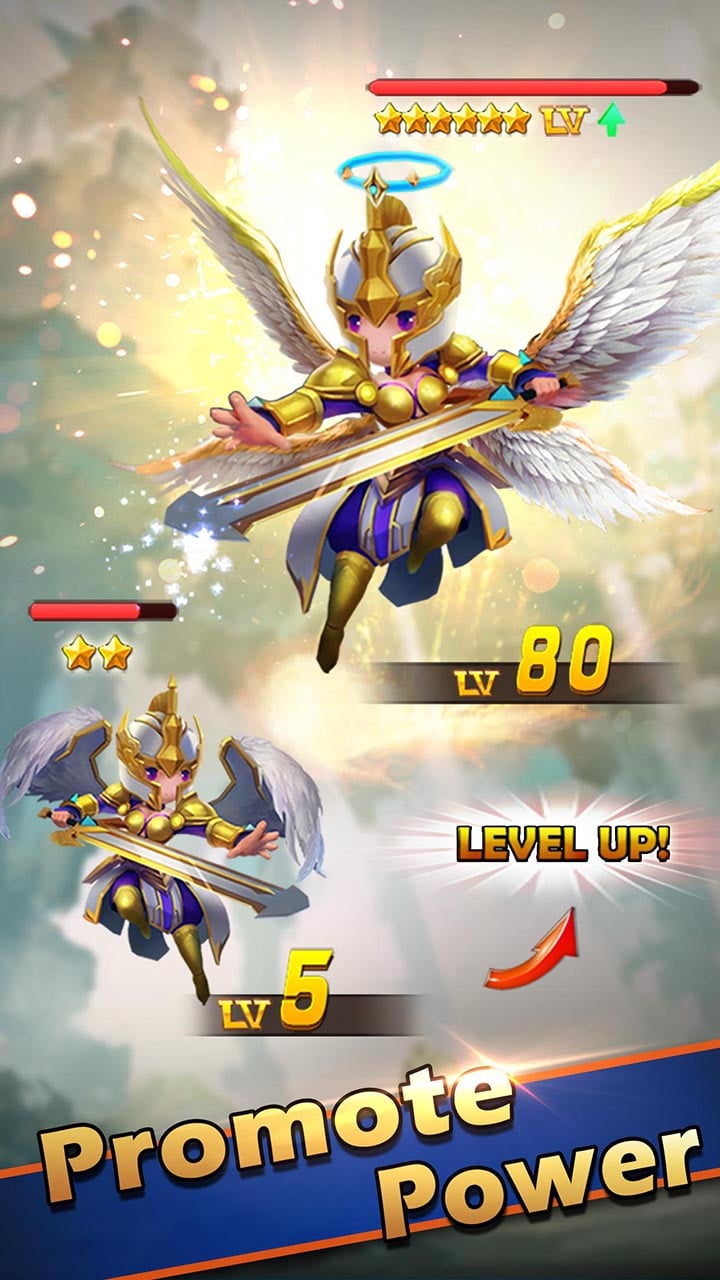 Overall, the quality and charisma of the Hyper Heroes are undeniable! Players will choose a team of four favorite generals in the shape of famous MOBA characters inspired by DotA 2 and LOL.

Not just a Slingshot RPG game, Hyper Heroes Mod APK also gives players a lot of new and exciting experiences. As you all know, Hyper Heroes is characterized by fighting based on the skill set of famous champions inspired by League Of Legends and DotA.

But the longer you play, the choice of champions to upgrade, forming a lineup that meets your ability to improve so you don’t spend too much experience and gold money on the squad you don’t use.

And here is a guide to help you get acquainted with Hyper Heroes quickly, and from there, you can upgrade your squad with the fastest speed, most reliable and least expensive possible!

With four mid-range champions that Hyper Heroes gives us in the ancient game of Riven, Garen, Lina, and Yurnero, combining them with upgrades will provide you with an incredible chain of victories.

When it is Lina’s turn, the player should aim precisely at the small circle that appears before the supreme boss. Attacking this position will increase the damage three times, which means dominating the battlefield faster.

In Hyper Heroes, creating combo combinations between champions is the most important factor that players should not ignore. No matter how considerable the damage of each winner is, it definitely won’t be equal to the four champions combined.

Also, understanding each champion’s characteristics will make it easier for you to make a lineup and combine with new generals with higher power than current champions.

How to gain more levels without spending a lot of money?

If you are wondering how to level up fastest, the answer is to “plow” quests and take part in events in Hyper Heroes.

Lots of events for you everyday

Almost a Hero carries a clear storyline and is set in a strange kingdom. Although not dominated by hordes of monsters, this land is plunging into war by the people themselves.

Finally, when the heroes fell, the villagers had to send nine other characters to fight. Funnier than when the selected people are idiots, often not appreciated. Suddenly, today has become the Hero.

Tap Titans 2, from the start, has put players on an exhilarating adventure. Here, gamers will be plunged into many cartoony landscapes. With the game, gamers will carry a sharp sword, find and destroy the giant monsters that appear more and more like a pandemic with a conspiracy to dominate the world.

People know that Hyper Heroes MOD APK is a mobile game with a slingshot genre. It is one of the new and rarely seen ways of playing in the gaming market. The player’s task is to build a squad to fight with a certain number of members and bring them to war against the enemy.

In particular, Hyper Heroes has a huge number of bosses, scattered in a multitude of large and small missions. Notably, each boss will have its characteristics and skills, even if it is a sub or supreme boss.

The features in Hyper Heroes respond to the basic requirements of gamers. Besides, there are additional features to help players have new experiences.