If you often find yourself traveling, especially to a country which you don’t speak their languages, then it’s always good to have a proper translation app to work the communication jobs for you. And speaking of which, with iTranslate, you can easily translate whatever languages from the country that you’re in, no matter if they’re in text forms or from conversations.

Enjoy working with the free translator, transliterator, and dictionary app, which provide its simple and interactive tools for you to freely alleviate any content to your preferred languages. Explore the huge collection of available languages in the app, which allow you to freely explore their vast applications. Feel free to go anywhere across the world without getting limited by the languages barriers.

Learn more about this interesting application of iTranslate and all of its features with our comprehensive reviews.

So basically, with the app available on your mobile devices, Android users will have themselves a fully functional and extremely convenient translator app, which can be easily accessed on the go. Feel free to enjoy it in many different features, as the app helps to remove any language barriers in their various forms.

Choose to translate certain languages in text by inserting the words into the built-in translator interface in the app. Or you can use the voice input option on your Android devices to translate certain words that you only know to spell. iTranslate even supports the OCR feature, which let the app read menus, signs, and physical documents using the built-in camera on your device. These should allow you to quickly translate the certain content without any troubles.

Also, you can make use of the useful translation results, which feature accurate pronunciations in different dialects or between male and female speakers. Use the app to translate up to 100 different languages. Explore the useful dictionary with clear explanations of the words, relatable examples, and the useful thesaurus. All of which will let you make the most of the digital translator app. 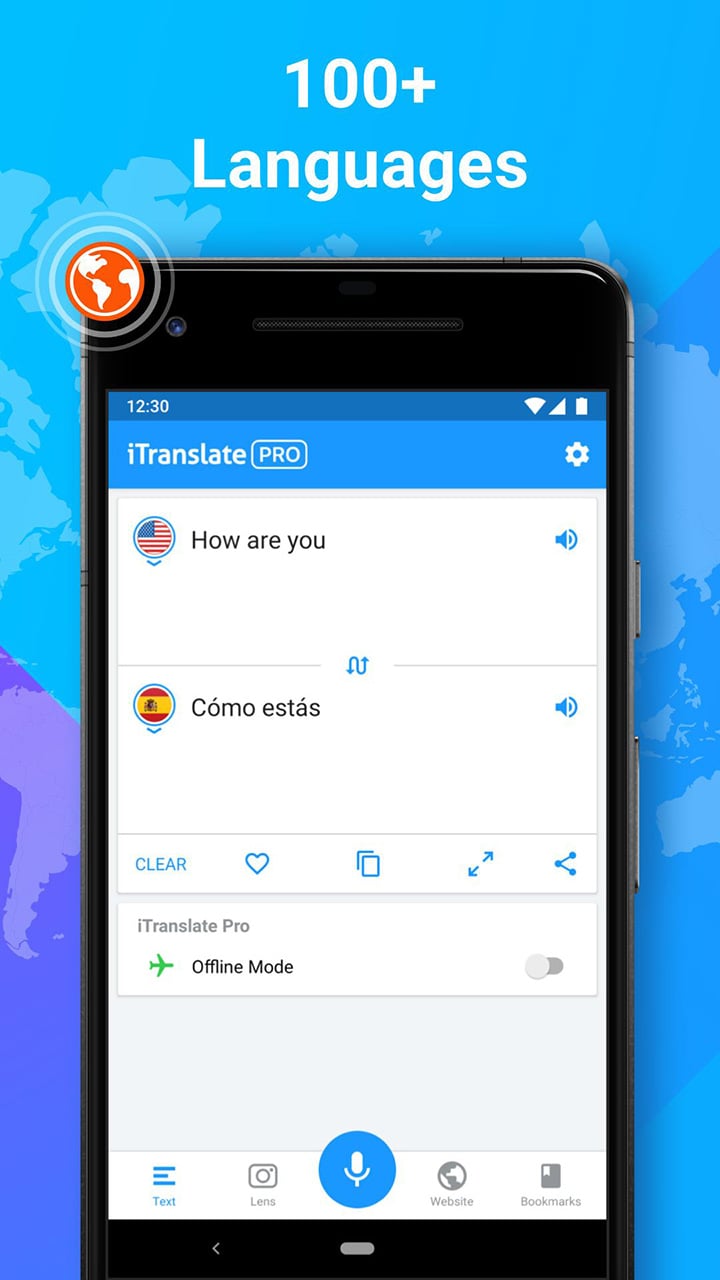 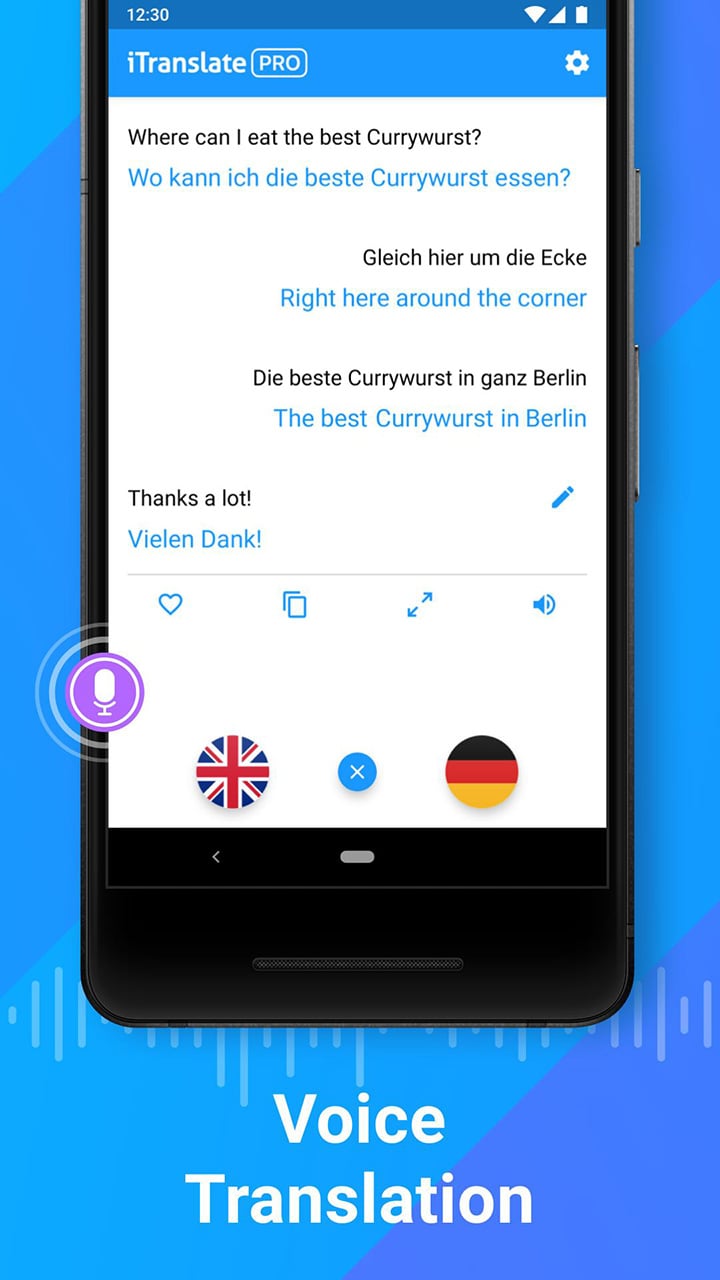 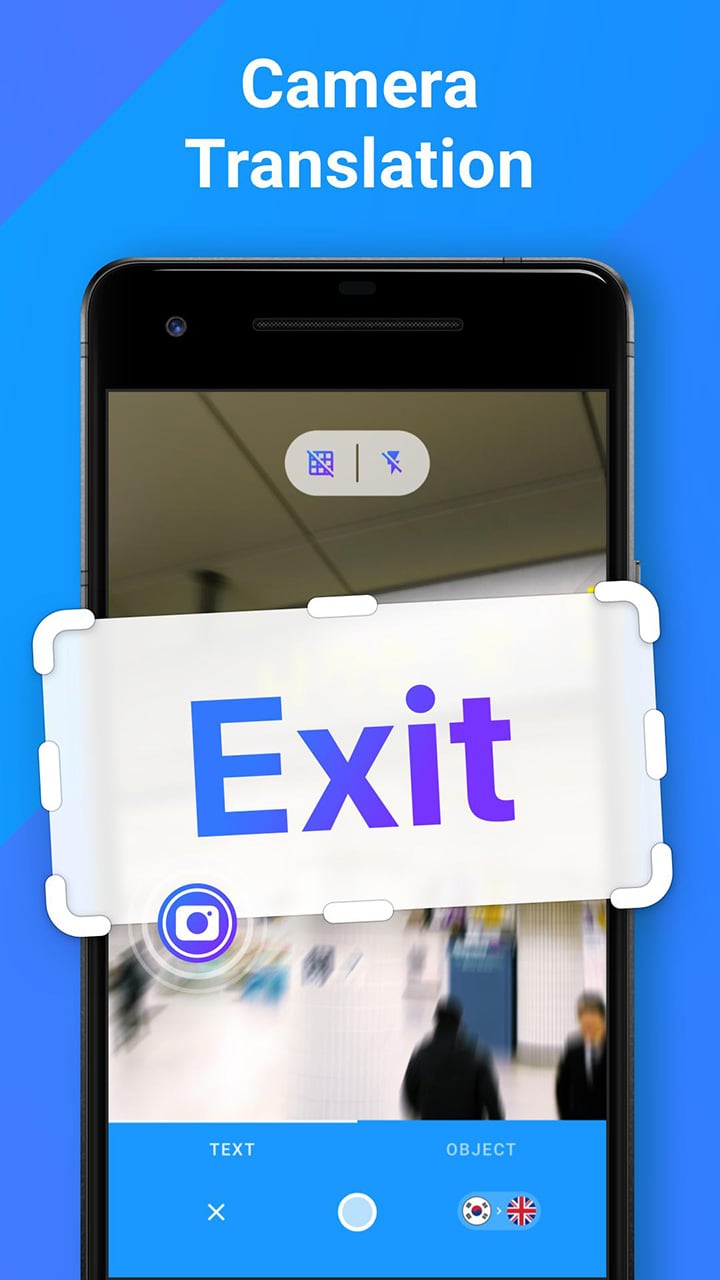 For those of you who are interested, you can now enjoy the useful application of iTranslate for free, thanks to the available app on the Google Play Store. Simply download and have the app automatically installed without having to pay anything. But if you wish to make the most of its features, there will be certain in-app purchases that you need to unlock with real money.

Also, don’t forget to provide the app with certain access permissions, which are needed to enable many of its features on your devices. So make sure to consider the requests upon entering the app for the first time. And like other Android apps, your devices should be running at the latest firmware versions to enable the compatible and stable application.

Simple and easy to use

To start with, Android users in iTranslate can quickly work with the intuitive and accessible mobile application, which features a user-friendly UI and many useful settings. Make use of the accessible translation menus and quickly execute your commands. Feel free to use it to translate any foreign languages into your natives, making it super easy for you to be comprehensible.

Support up to 100 different languages

And speaking of which, the app currently supports up to 100+ different languages from many countries across the world. Thus, allowing all Android users to make the most of its features, no matter where they’re from and what they speak. Quickly insert the words, dialogues, or documents in iTranslate to have them properly translated to your default or customized target languages.

Feature both male and female voices

For those of you who are interested, you can now feature both male and female voices in iTranslate, as the app lets you listen to the certain translations that you find most enjoyable. Feel free to select your preferred audio options with different translator voices in iTranslate.

Different dialects to work with

At the same time, the app also offers voiced translations in different dialects. Hence, depending on the certain languages, you can enjoy listening to their correct pronunciations in various dialects, which would make the dictionary app a lot more comprehensible.

Along with the quick translation features, iTranslate also allows Android users to work with the fully-featured dictionary and thesaurus, each featuring detailed and on-point translations on all words. Feel free to use it to pick up informative explanations on certain words and how you can use them in different situations. At the same time, the useful thesaurus will feature old words that will definitely impress you with their unavailability on other modern dictionaries.

Here in iTranslate, you can have yourself a fully-featured dictionary app, not just for translating but also for studying certain languages. Now, you can pick up the amazing transliteration with detailed and informative explanations of the certain words. Feel free to save your new words into the Favorites menu and take a look at these words whenever you want. Also get reminded with these new words to quickly improve your vocabulary. And iTranslate will even support word sharing for all users, thus, making the mobile app a lot more convenient.

And speaking of which, to make sure that you can enjoy the application, especially during the translation phases, Android users can now make uses of the OCR technology. Here, the useful tool will let you view menus, signs, and physical documents via the built-in camera on your mobile devices and have the texts being properly digitized without any troubles. Then, you can have the app translate certain words or sentences quite easily.

For those of you who are interested, you can now enjoy working with the interesting mobile application of iTranslate even without the Internet. Here, the app let you access the offline dictionaries, which consist of more than 40 different offline language packs. Feel free to use it to translate certain words without needing the Internet connection. Thus, allowing you to always enjoy iTranslate’s features on the go. 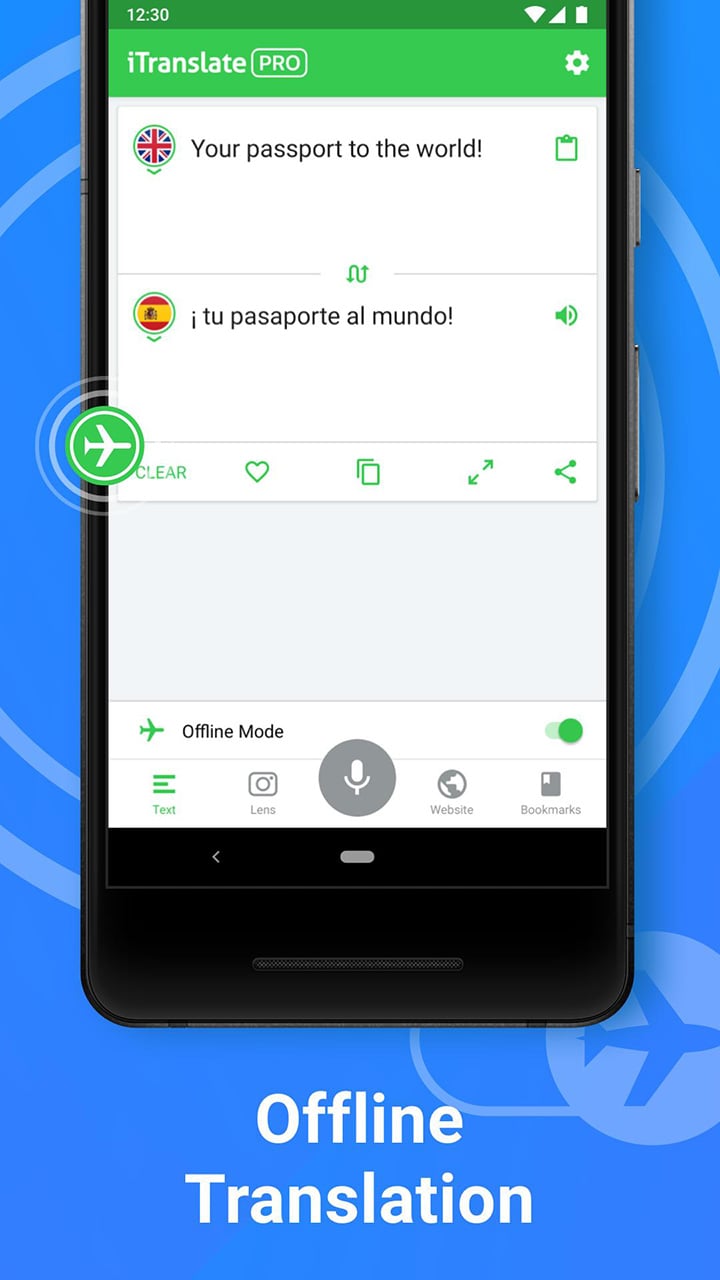 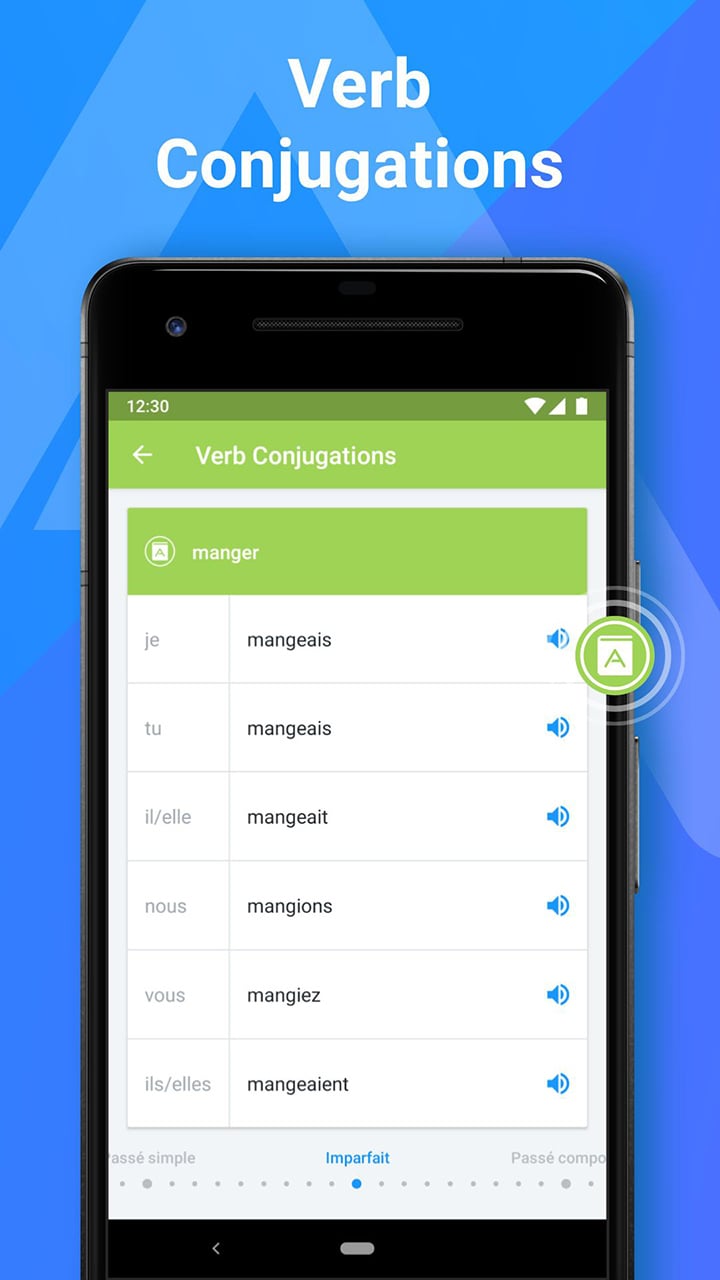 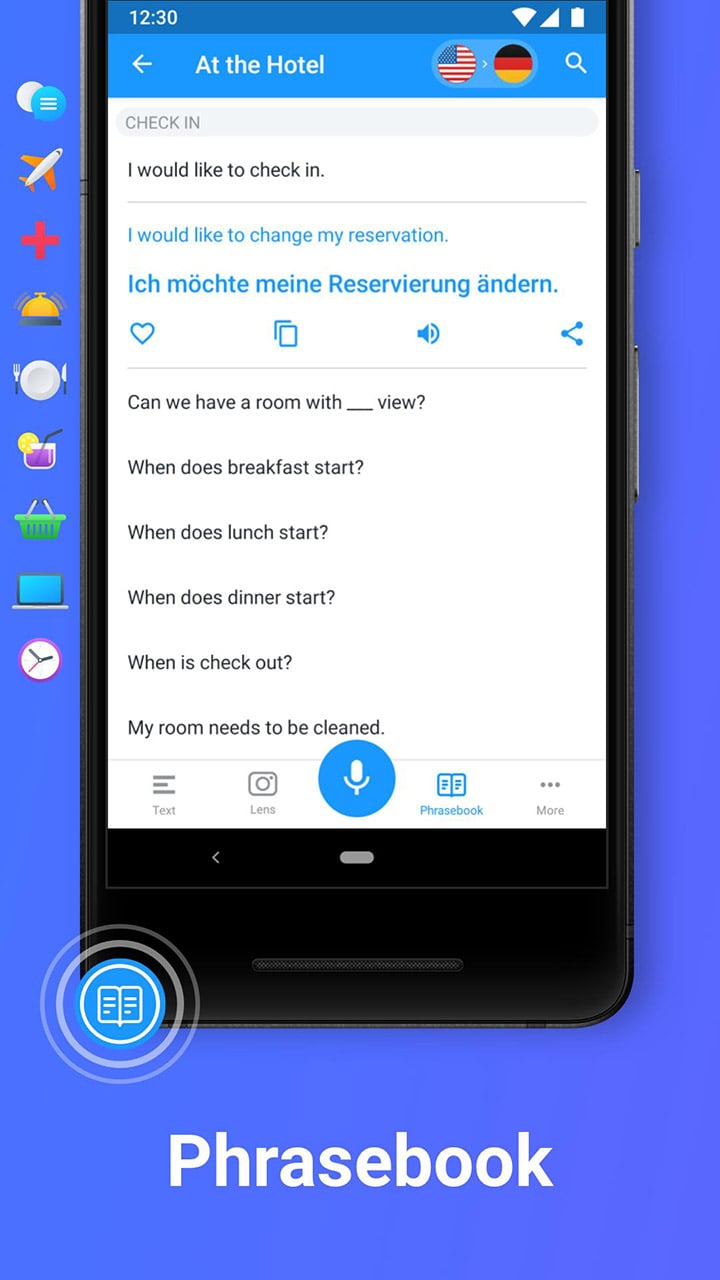 Engage in conversations with Voice-to-Voice translation

Along with the OCR feature and the virtual keyboard, Android users in iTranslate can also use the voice-to-voice translation option to insert data. Simply use the built-in microphone on your mobile devices to let iTranslate record, recognize, translate, and rebroadcast the speeches from one language to the other. This is super convenient when you’re having a conversation with others in different languages.

Learn a little bit of grammar

And last but not least, for those of you who are trying to study a new language, it’s nice to have the grammar features enabled in their translator app. And with iTranslate, you can pick up verb conjugations in different tenses and other grammars, which would make it super easy for you to study and memorize the new lessons. All of which should make you more proficient with your choices of new languages.

Enjoy the free and unlocked app with our mod

For those of you who are interested, you can now enjoy the free and unlocked application of iTranslate on our website, which will allow Android users to enjoy its features to the fullest. Here, we have gotten rid of unwanted ads and in-app purchases. So you can enjoy the app without having to pay for anything. All it takes is for you to download the iTranslate Mod APK, follow the given instructions, and you’re good to go.

Now, Android users can comfortably travel around the world without experiencing any language barriers, since iTranslate will come with all the important features to help you with that. Simply use the app to quickly translate content from certain languages to another, either in physical documents or digitized data like texts and voices. And most importantly, the massive collection of language options, featuring more than 100 available languages will make sure that you can always enjoy iTranslate to the fullest. Not to mention that with our unlocked and free version of the app, you’ll have better reasons to enjoy it.