After the success of the smash hit Mr. Bullet in 2019, Lion Studios has been releasing so many intriguing and well-known games. If you have never heard of Mr. Bullet, let me introduce it briefly for you. This is a puzzle game with lots of levels, in which you are going to defeat all the enemies with different kinds of weapons. It is just as simple as that! However, today I am going to review another Lion Studios’ game which is equally interesting.

Not so long ago, in 2020, Lion Studios decided to launch a new game with different content but the same concept as Mr. Bullet. It is called “Mr. Ninja – Slicey Puzzles”. You may wonder, why are they launching a similar game to their previous one? Well, personally, “Mr. Ninja – Slicey Puzzles” is still very different from Mr. Bullet, it is a sequel to Mr. Bullet with a variety of brand-new features that no player has seen before. Let’s get into the review and learn more about the game!

Just like its title, players will become a ninja who is equipped with various weapons. The rivals are hunting him and capturing hostages to intimidate him. His only mission is to defeat all the enemies that prevent the way. It does not sound like a big deal but do not think that it is an easy task!

When players first enter “Mr. Ninja – Slicey Puzzles”, they are introduced to a very simple tutorial with a few steps. To kill the opponent, players must slide their finger on the rivals or the objects in order to kill them immediately or make them fall and explode. Since it is not simple to do it in one slide, it is necessary that players use their intelligence and finesse in this unique puzzle game. Start your adventure now!

As I have mentioned above, “Mr. Ninja – Slicey Puzzles” is an absolutely simple game, all you have to do is slide your finger on the screen. Equip your character with different types of swords in this slash’em and dash’em puzzle experience. However, this game will test your creative thinking. The enemies will get smarter and better at higher levels, and they can even block your attacks.

As you are on a stealth mission, remember to use your quick wit and cut through all the bad guys. They do not care if you are friendly or not, they will all try to get in your way! Players can travel to different levels and themes after finishing a stage. Do not worry if you cannot earn three stars the first time, you can try again the level as many times as you prefer. 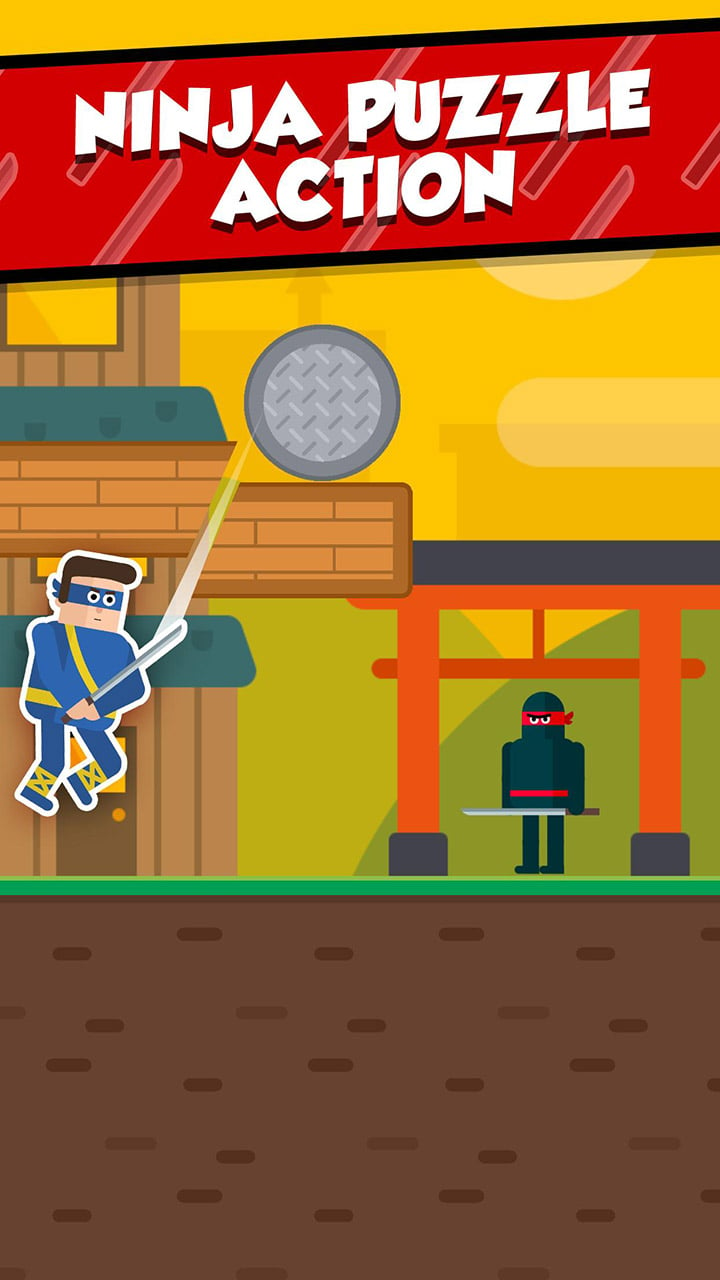 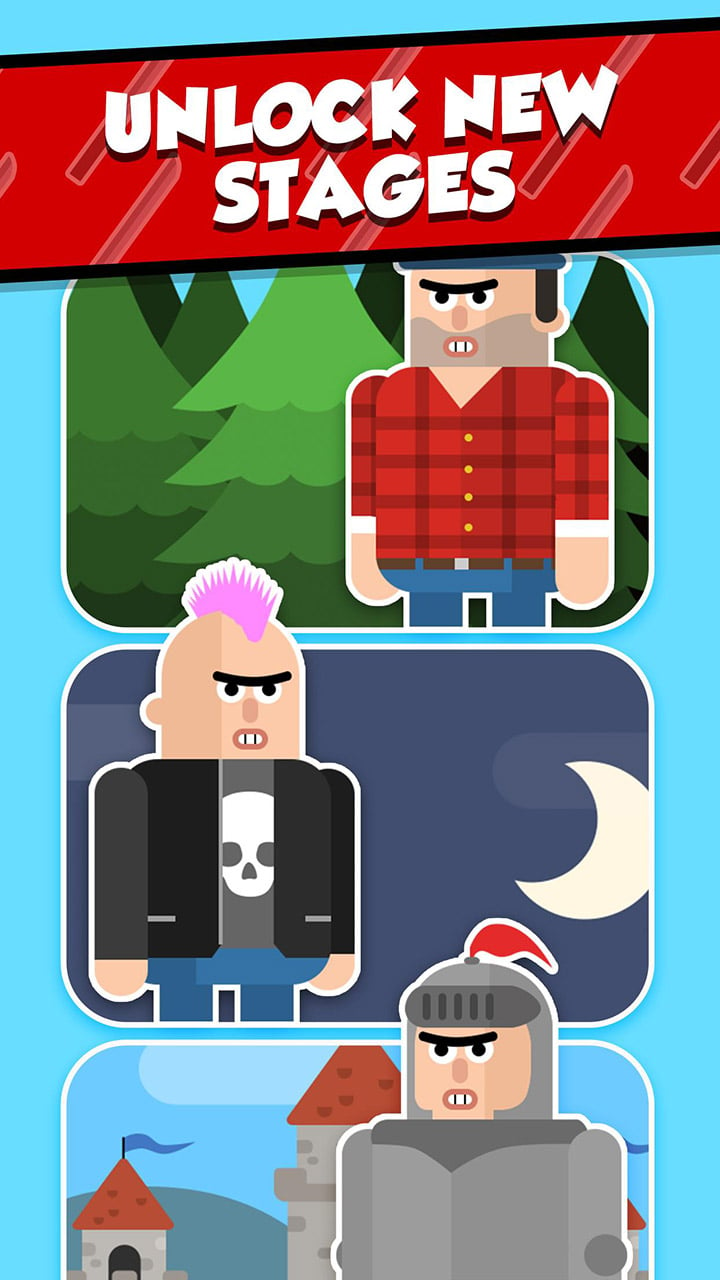 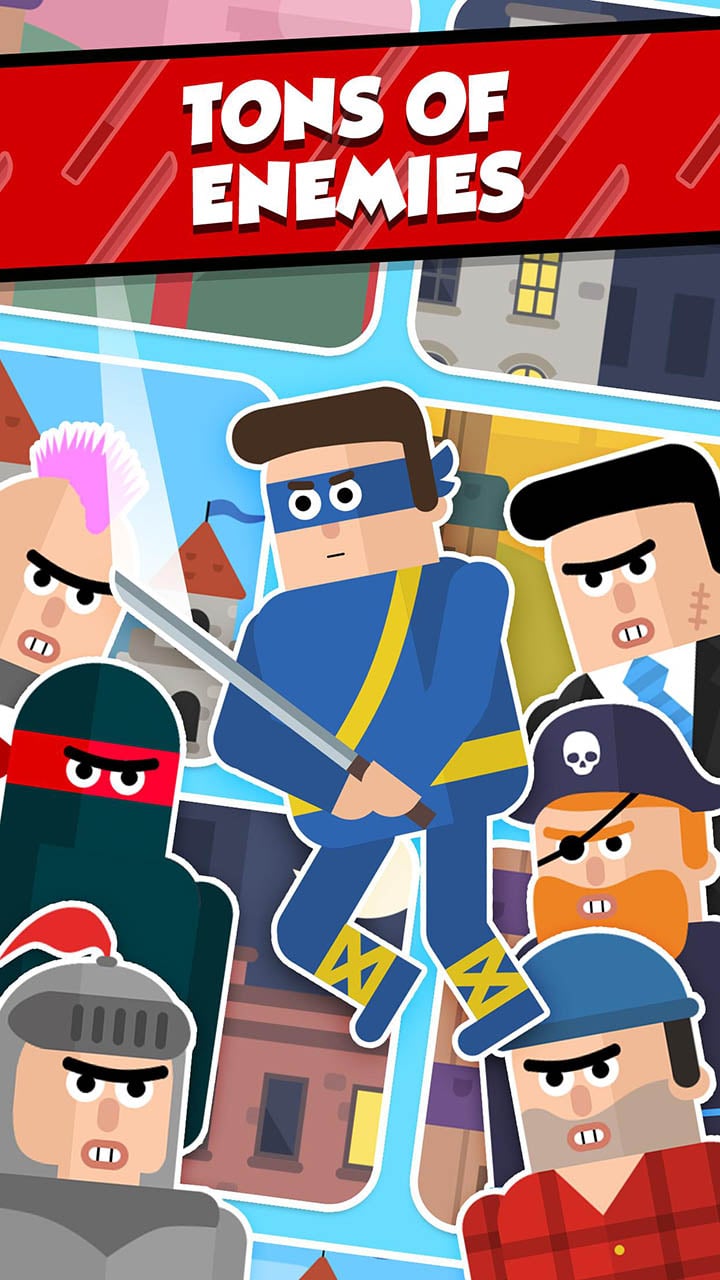 There are two modes: sword and ninja stars. In the sword mode, players will be equipped with a diversity of swords such as ice blades, golden katana, bloody hax, etc. This mode has up to 420 levels with all kinds of themes, for example, beach, japan, prehistory, and so many more. On the other hand, the ninja stars mode only has 240 levels with the main weapon is the ninja stars. It also has various map themes to enjoy. In addition, each level has three stars to obtain.

In the first few levels, the game goes super well and easily. The level ends when all enemies are down. Do not be afraid of failing, this game is so simple that anyone can play it! Besides, “Mr. Ninja – Slicey Puzzles” allows you to play any level over and over again. Moreover, you can get x2 money by watching a video. On a certain level, besides killing the enemies, players will get a side mission such as rescue hostages, throw shuriken at people, go on secret missions, etc.

Players can choose either male or female versions for their own character. There is a huge number of costumes and skins for you to purchase and put on your character in the store. You can also earn a new costume after finishing a certain number of levels. Some appearances are Viking, Vampire, Ninja, Mummy, and so many more.

Since there are two game modes, there are two types of weapons: swords and ninja stars. In the sword section, a diversity of swords is displayed for players to choose from. Furthermore, they can earn a new weapon when the progress reaches 100%. Players can see what weapon they will get after completing a level. If a hard level occurs, you can use the golden katana to get through it effortlessly.

In “Mr. Ninja – Slicey Puzzles”, the enemies are various. They can be evil ninjas, mafias, samurais, etc. The higher the level, the more they appear and the stronger they become. Players may notice that, when the opponents are knocked down, they will make hilarious sounds. 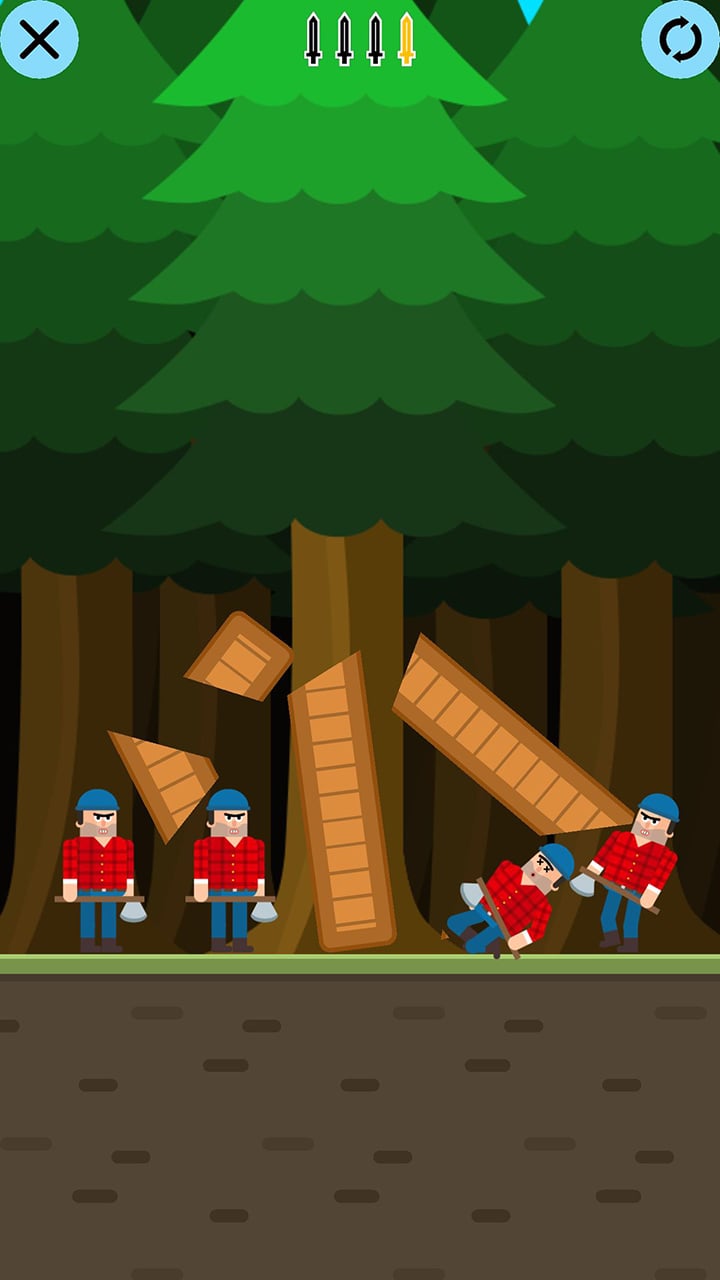 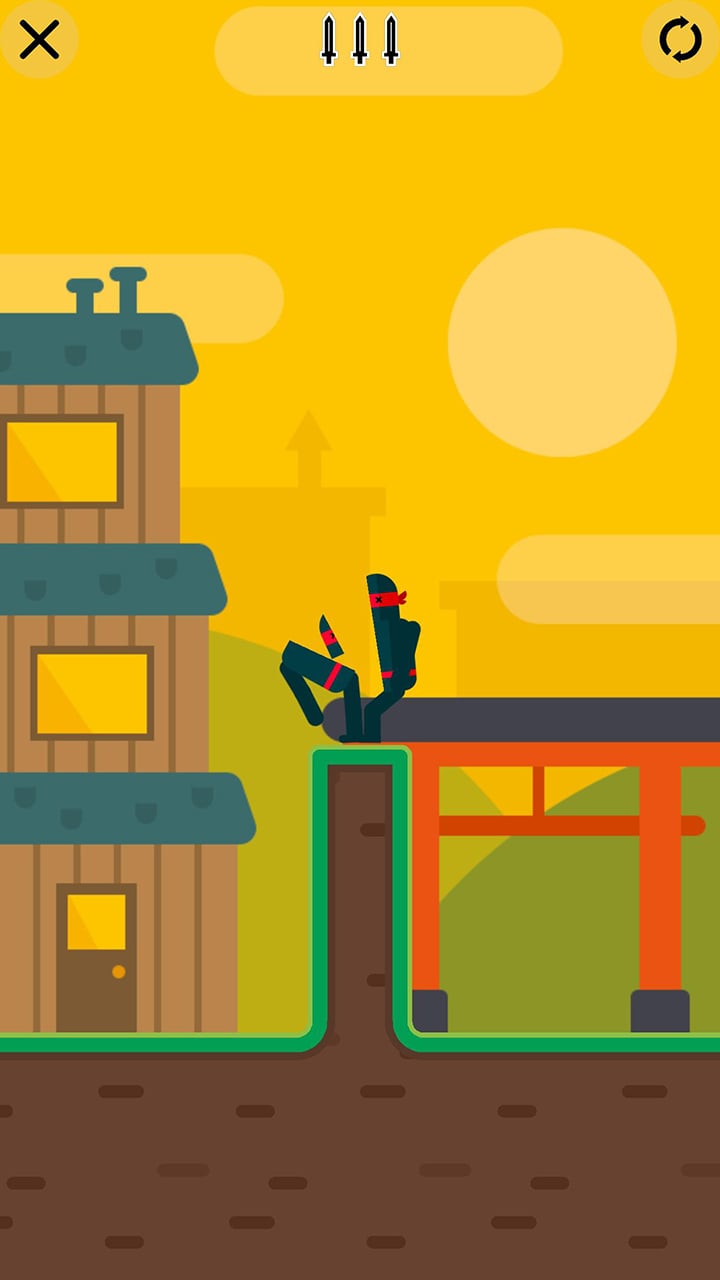 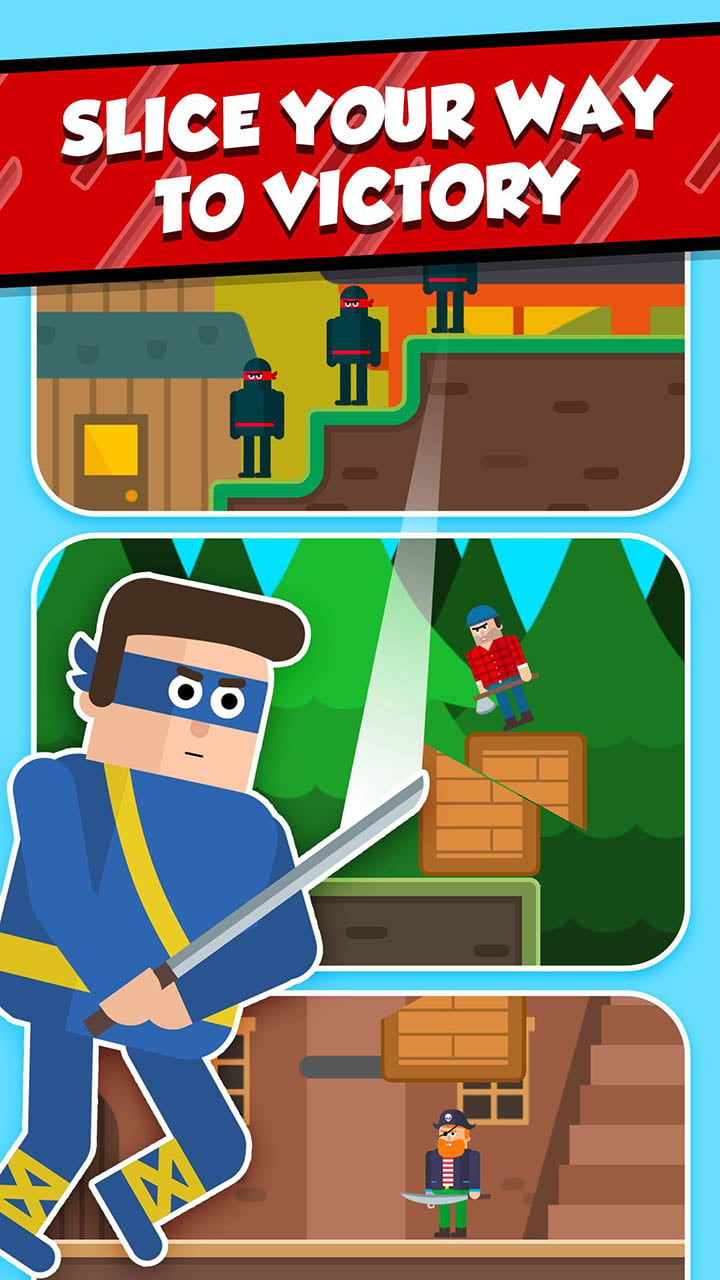 Since “Mr. Ninja – Slicey Puzzles” can be repetitive sometimes, players can get bored of playing the same thing again and again. However, a solution is here. The game will be frequently updated with new features and content such as up to date unique levels, weapons, and other skins that can amaze and please any grumpy player.

All the weapons and costumes are unlocked for free! Now, players can enjoy Mr. Ninja – Slicey Puzzles Mod APK with different costumes and weapons. It is such a joy to change contrasting skins and swords every time you play.

Although “Mr. Ninja – Slicey Puzzles” is a simple game with legible gameplay, its design is always on point. The characters and backgrounds have pleasing colors. The frame rate is steady, no bugs or glitches are found during the gameplay. Personally, even if the enemies are supposed to look evil, I still find them adorable.

As for the soundtracks and effects, there is nothing special besides the noise the enemies make when they die and the slicing sound of the weapons. They are all well-made.

All in all, “Mr. Ninja – Slicey Puzzles” is such a worth-playing game with distinct content and fascinating features. Players can enjoy the game in their free time by themselves or with their friends and family. Try this game with them and compare the highest scores!