The exciting gameplay of idle clicker will allow Android gamers to comfortably enjoy their mobile games without wasting too much of their time. Plus, it’s also equally fun compared to other titles, which should allow you to have fun with the mobile game to the fullest. And here in Planet Bomber, you can enjoy your addictive gameplay of arcade action, as you take on the planet bombing quests at their best. Have fun with endless gameplay of bombing action with many of your unique and powerful rockets. Take on many interesting in-game levels and further discover the available powers. Upgrade your rocket launching abilities with new types of fire powers, enhanced accuracy, improved powers, and interesting level ups, which will allow you to enjoy the game to the fullest. Find out more about this interesting game from VOODOO with our in-depth reviews.

Here in Planet Bomber, Android gamers will have their chances to take on the ultimate gameplay of planet bombing actions. Engage yourself in endless levels of destruction as you travel across the galaxies, looking for dangerous planets to destroy. Have fun with many planet bosses that will also repel your attacks, which will make the interesting gameplay of Planet Bomber a lot more interesting. At the same time, also enjoy the idle clicker mechanics, in which gamers can comfortably engage themselves in the gameplay of action, simply by tapping on the screen to unleash your rockets. Or alternatively, feel free to let the rocket launcher operate on itself. Allowing the idle gameplay to slowly destroy the planets. Only return to the game when you have time to spare and make simple changes and upgrades to further advance in the game.

To start with, Android gamers in Planet Bomber will have their chances to take on their relaxing gameplay of idle clicker, using the simple in-game controls and accessible UI. Feel free to launch and control the direction of your bullets with the one-touch controls. Quickly access the in-game options with the provided touch icons in Planet Bomber. And most importantly, with the idle clicker mechanics, you won’t even have to play the game to collect your in-game rewards. Just let the idle rockets hit the planets as you return to grab your rewards. 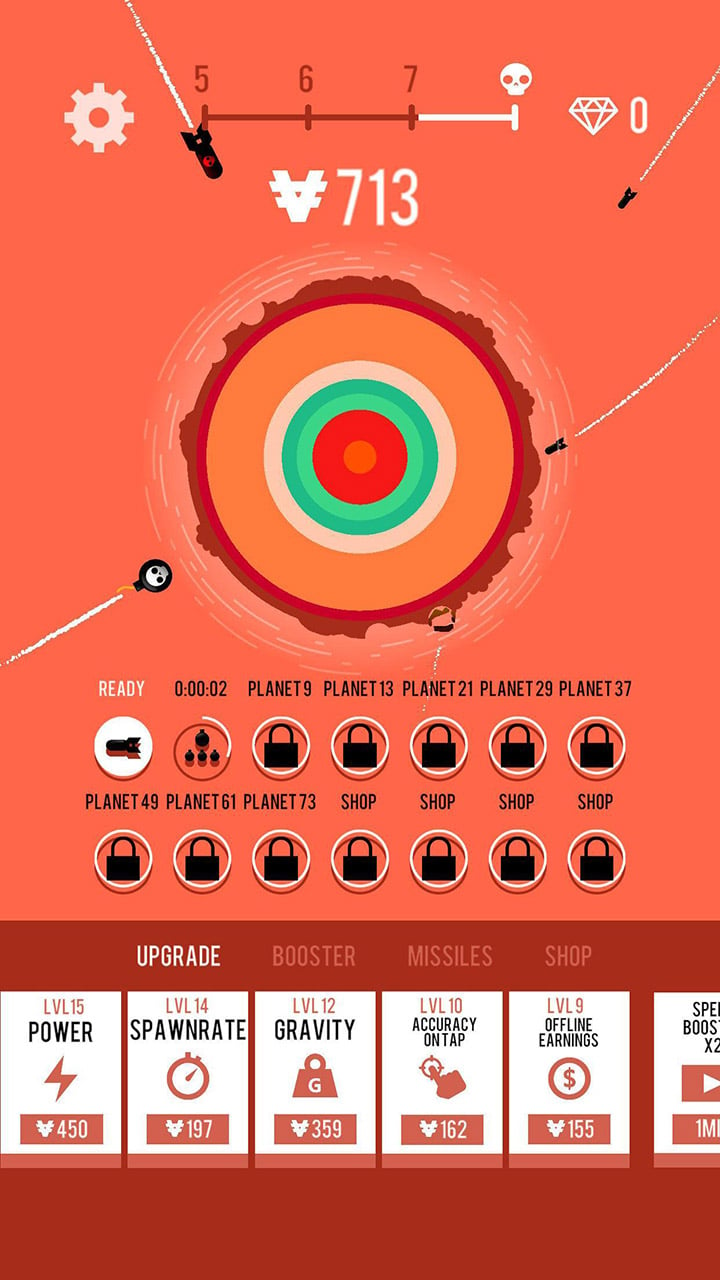 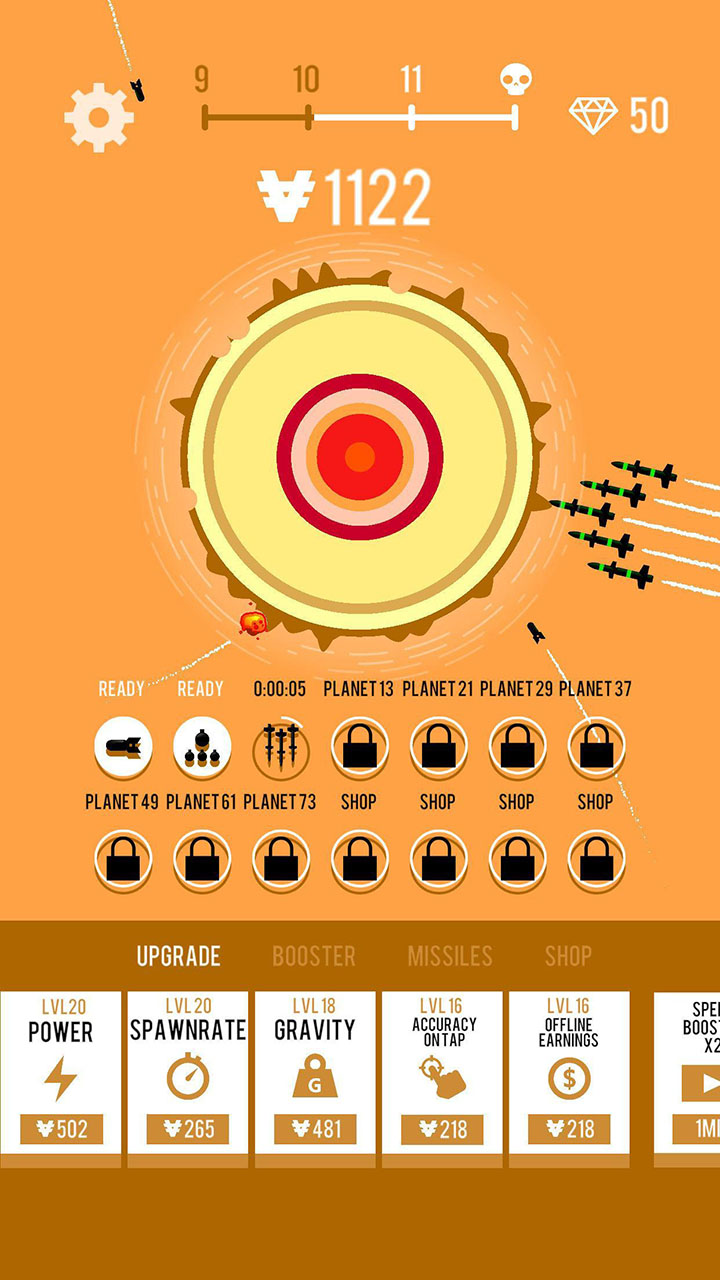 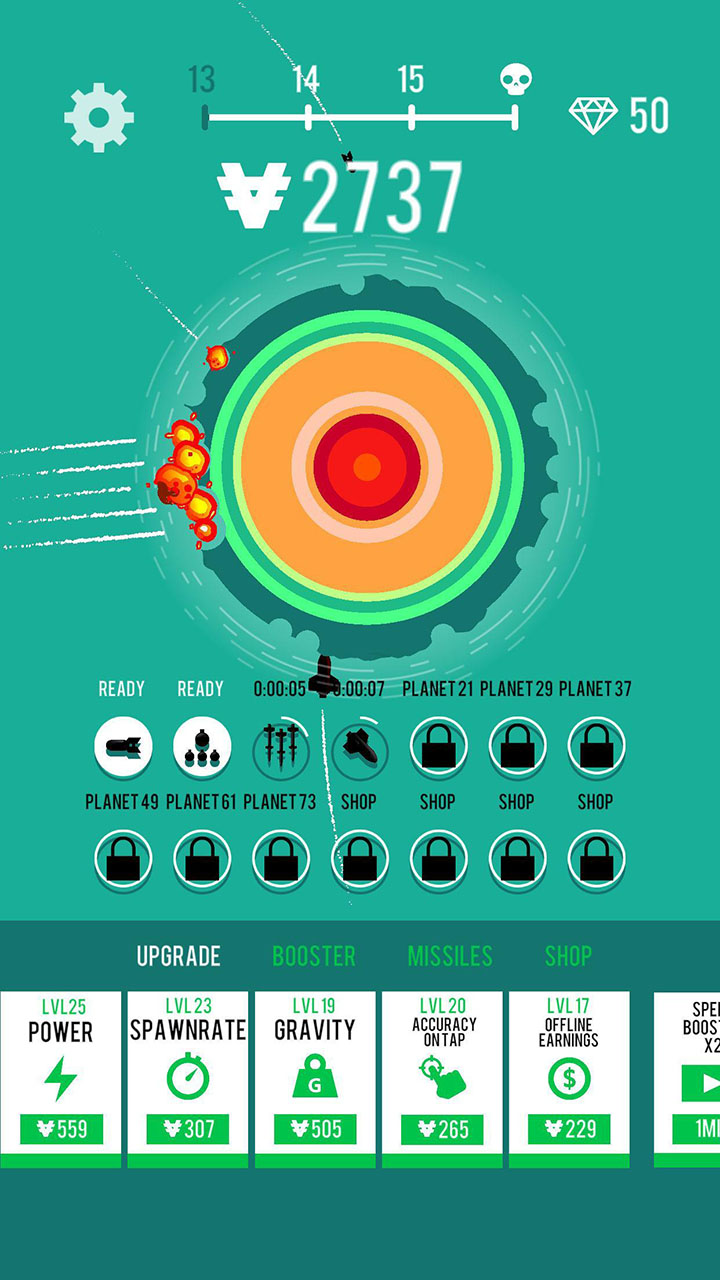 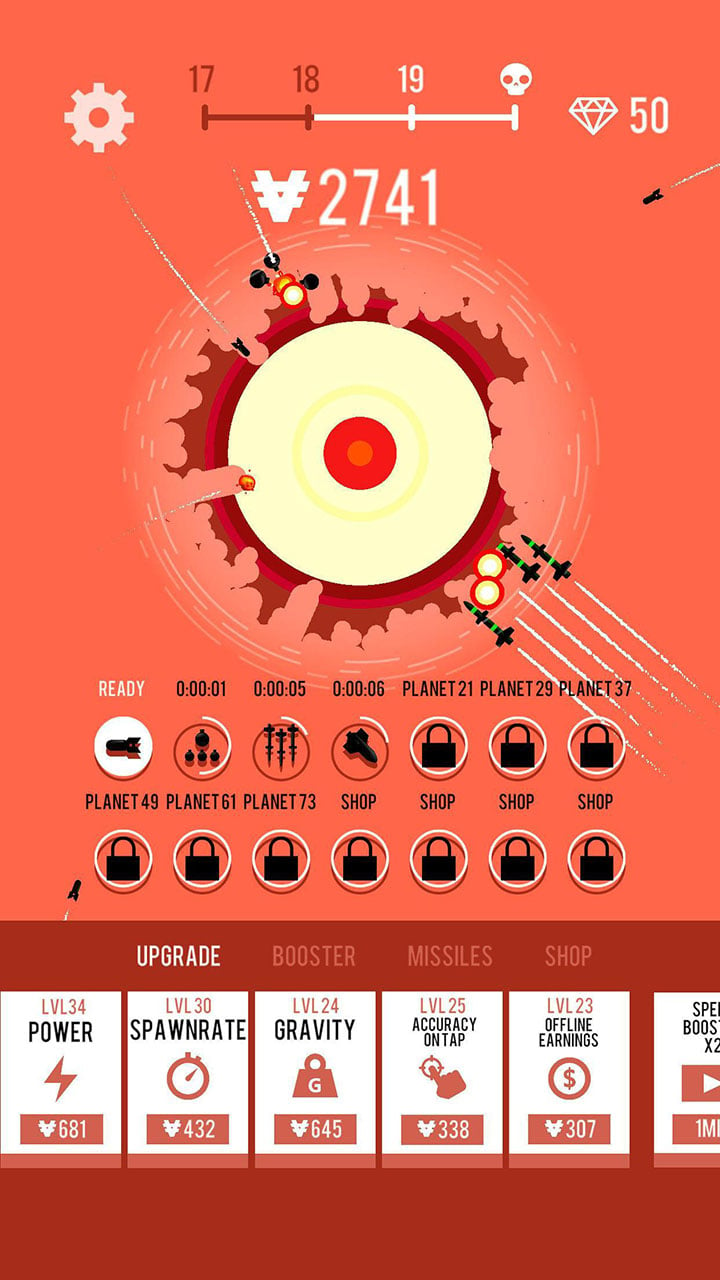 Here in Planet Bomber, gamers will also have their chances to take on multiple in-game levels with escalating level of difficulties. Feel free to take on the awesome gameplay of actions and never find your levels getting bored. Play with your different planets, each having its own unique shapes and constructions. Come up with ways to quickly take down these obstacles. And find yourself enjoying your epic battles against the enemy’s bosses that are not only difficult to take down but also have their own anti-missile defenses.

To make the planet bombing gameplay a lot more interesting, and allowing gamers to effectively deal with different in-game levels, Planet Bomber also provides different types of missiles for you to unlock and make uses of. Here, with the super-powered missiles that come with different fire powers and flying patterns, you can have fun with your planet bombing gameplay to the fullest. Have fun discovering the awesome types of missiles in the game and have more fun with your in-game levels.

Multiple upgrades to collect and enable

As you progress, the game also offers many upgrade options, which you can make to further power up your in-game arsenals. Feel free to upgrade the power of your missiles to enable better explosion. Unlock better spawn rate so you can fire quicker. Improve the gravity of the planets to make sure that your shoots will hit their targets. Increase the missile accuracy with the upgraded on tap precisions. And always collect more while not playing the game with your offline earning upgrades.

Interesting power-ups to boost your powers

Together with many upgrades, Android gamers are also allowed to pick up interesting power-ups from Planet Bomber, which provides many temporary power boosts for your missiles. Have fun enabling the time wrap option to instantly collect your rewards from hours of constantly firing. Or simply enable the speed boost and let your idle rocket launcher do the work with multiplied shooting rates.

For those of you who are interested, you can have fun with the offline gameplay of Planet Bomber, which provides many interesting in-game features for you to work with, even when the Internet isn’t available. Feel free to enjoy the game whenever and wherever you want to.

And despite all the exciting in-game features, Planet Bomber is still free for all Android gamers to enjoy on their mobile devices. As a result, you can easily find it available on the Google Play Store without having to pay anything.

To make the game more interesting, we also offer our unlocked version of Planet Bomber on our website, which features unlimited money and diamond for you to make use of. At the same time, the unlocked in-game features will certainly impress you. All you need is to download the Planet Bomber Mod APK on our website. Follow the provided instructions and you’ll be good to go.

Here in Planet Bomber, Android gamers will have their chances to freely discover the awesome in-game world with intuitive and interactive graphics. Feel free to engage yourself in addictive bombing levels with interesting visual effects. And always have fun with the smooth and satisfying gameplay on any of your mobile devices, even the low-ends.

Together with interesting in-game graphics, Planet Bomber also provides its interesting sound effects and powerful music, which will keep you hooked to the game for hours on end.

With simple and relaxing gameplay, Planet Bomber should allow for Android gamers to have fun with their in-game experiences. Feel free to discover the awesome in-game world with lots of engaging levels. Have fun with interesting missile upgrades, which will allow you to easily smash through the obstacles. And always make uses of the free and unlocked version of the game on our website, which will allow you to have fun with Planet Bomber to the fullest.