The description of Smashing Four APK 2.1.70 Smashy fans will now have their chances to engage in yet another great mobile gameplay with Smashing Four. Have fun entering the awesome Arena and get yourself ready for the fierce in-game battles against players from all over the world. Experience realistic in-game physics and hilarious gameplay, where you can easily send your smashy heroes flying toward the enemies.

Make uses of the unique pool physics to effectively take down the opponents. Win battles, gain trophies, collect rewards & cards, and experience the awesome gameplay of strategy, as you comfortably guide the smashy heroes through the arenas. Have fun in multiple in-game levels, or challenge online gamers from all over the world. All of which will allow gamers to enjoy the exciting game to the fullest.

Find out more about this awesome mobile game from Geewa with our in-depth review.

Smashing Four is a classic strategy gameplay where Android gamers can take their epic heroes through many addictive and exciting battles against the nasty enemies. Fight in hilarious smashy gameplay simply by pulling and releasing your heroes to the selected directions. Tackle the enemies and advance yourself in the awesome mobile adventures.

Take on multiple in-game levels and engage yourself in many hilarious matchups. Unlock new heroes with amazing abilities and make the most of them to effectively take down your opponents. Build your ultimate rooster with amazing heroes and characters. And most importantly, the exciting online game modes will allow gamers to have fun with actual gamers in exciting real-time matchups whenever they are ready. 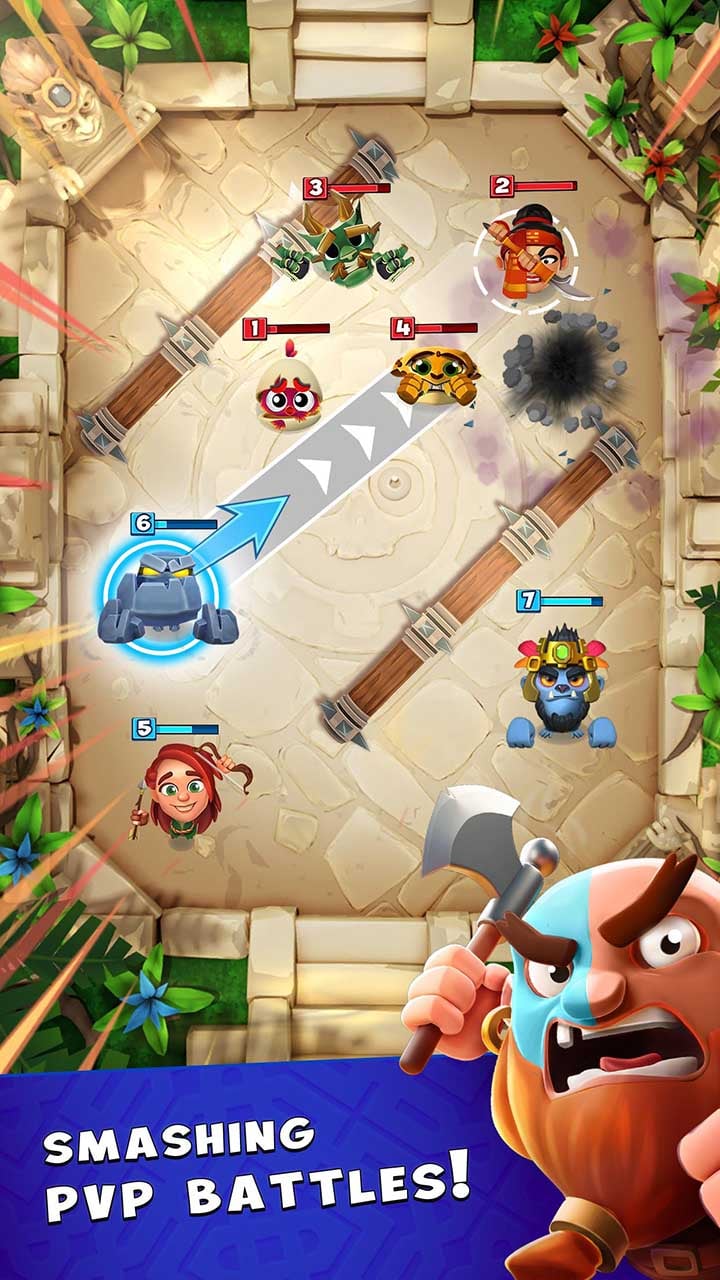 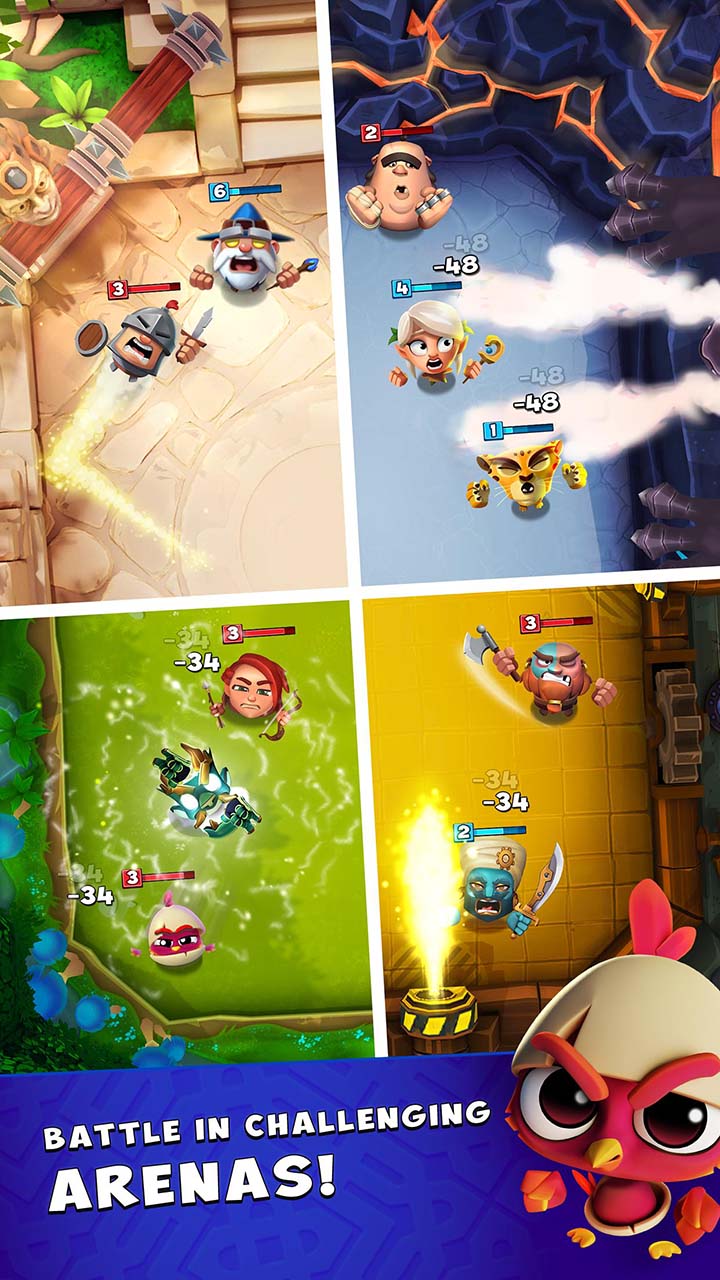 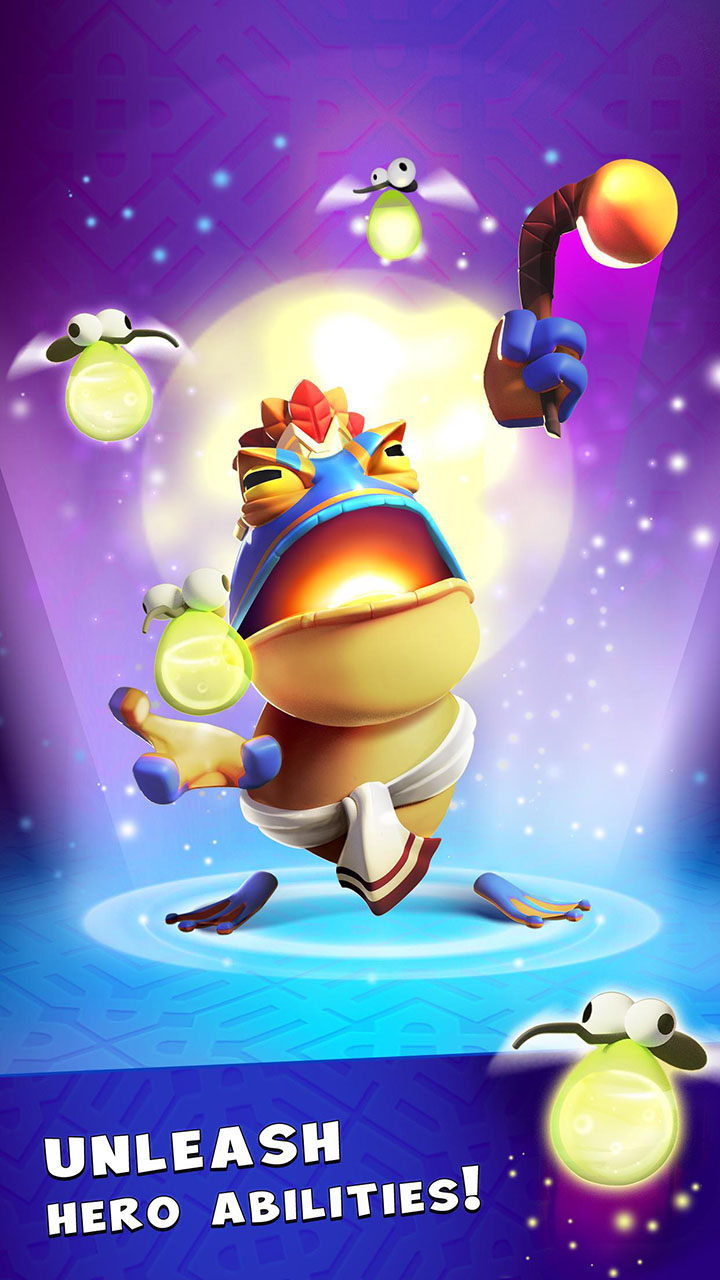 To start with, Android gamers will have their chances to enjoy the exciting gameplay of Smashing Four, thanks to its simple and intuitive touch controls, along with interesting gameplay of smashy action. All it takes is for you to aim your smashy heroes, pull them back to the opposite direction, and release your awesome shots to effectively fire the hero toward the selected direction.

For those of you who are interested, you can now make uses of the available gameplay of Smashing Four and experience its amazing elements. Enjoy the exciting PvP gameplay, have fun with real-time battles, explore the turn-based matchups, and experience unique card-collectible strategy. All of which will make sure that you can enjoy Smashing Four to the fullest.

Compete with players from all over the world

Have fun joining the awesome online matchups in Smashing Four where you can compete with players from all over the world. Duel your opponents in many challenging arenas, win battles to earn special rewards, and smash your opponents in many exciting arena fights. Complete your in-game challenges and get ranked up so you can enjoy even more interesting battles with skilled players.

Here in the game, there will be multiple heroes with interesting abilities, which you can make uses of and allow them to further enjoy their in-game battles. Feel free to collect multiple hero cards, each having their own unique abilities and attributes. Get all available and always expect new arrivals in Smashing Four.

And for those of you who are interested, you can now build your perfect team in Smashing Four and unlock interesting in-game strategies. Explore the awesome powers and abilities from your different heroes to learn ways that you can combine their powers. Create the ultimate roster, which will allow you to further advance in Smashing Four. 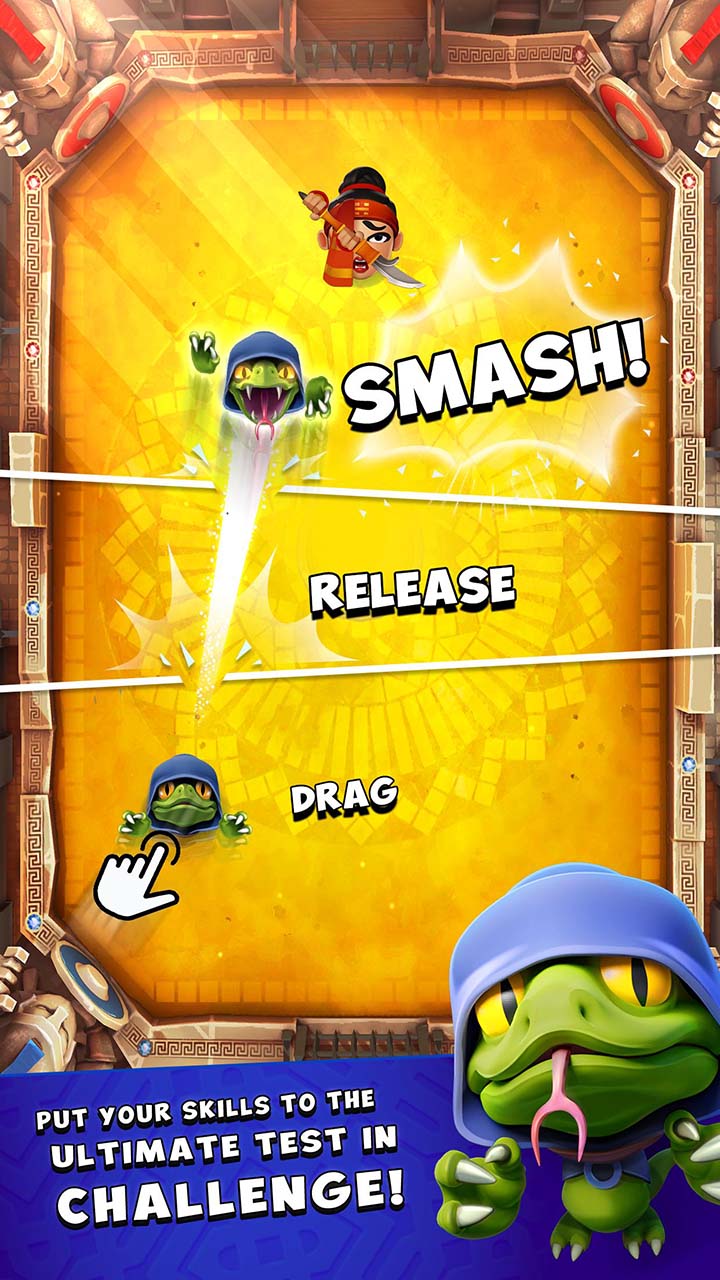 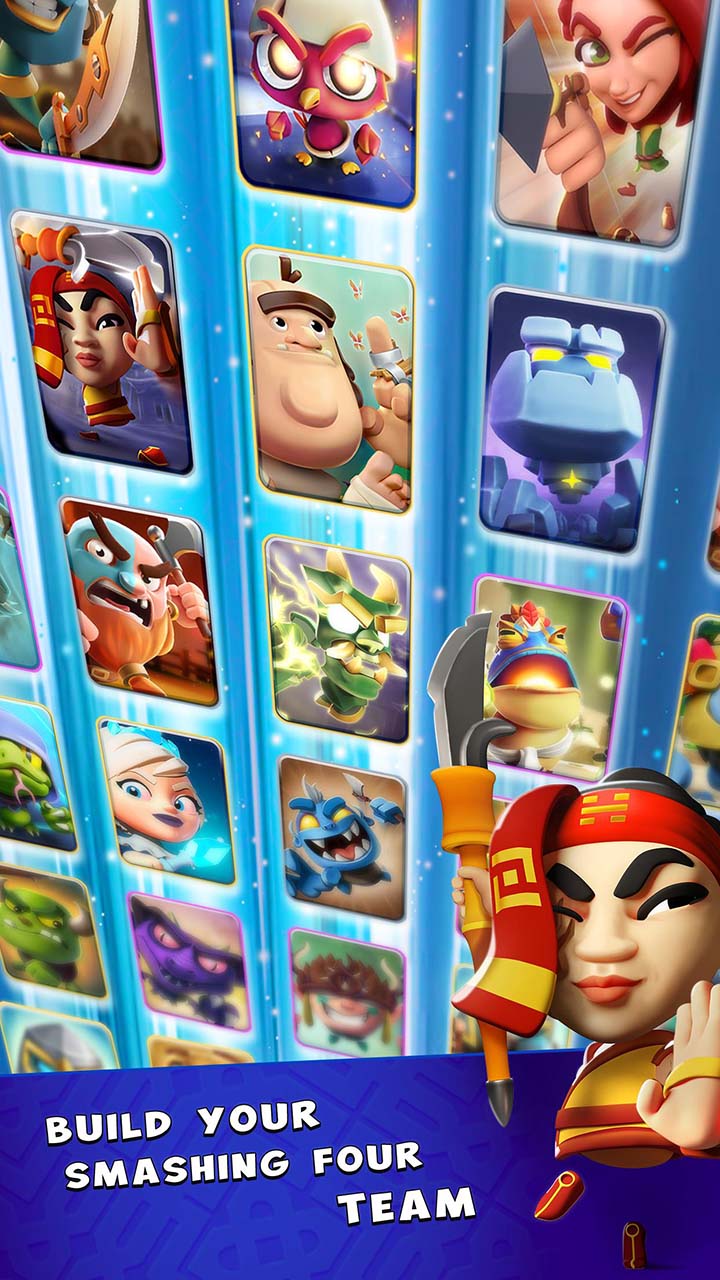 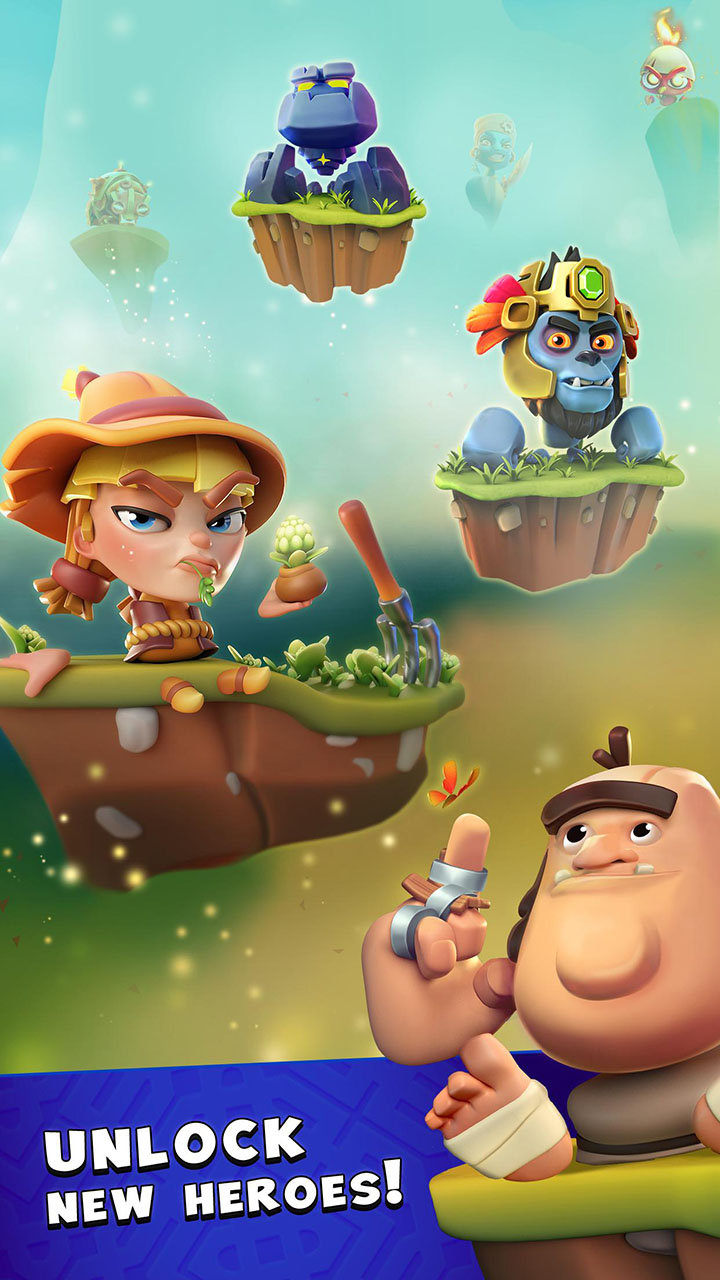 To make the game more interesting, Android gamers can now learn to work with 10 game-changing Arenas, each offering its own unique settings and addictive in-game elements. Explore the interesting environments with awesome setups which will allow you to have fun with Smashing Four in different experiences.

For those of you who are interested, you can also explore the awesome Clan gameplay in Smashing Four. Simply join an existing clan or create your own clan to start having fun with Smashing Four. Share cards with your clan mates, communicate in group chats, and have fun challenging your clanmates in friendly battles. All of which will make the online gameplay of Smashing Four a lot more exciting.

And despite all the exciting in-game features, Android gamers can now have fun with their free gameplay of Smashing Four on the Google Play Store. Feel free to explore many of its features without having to pay anything.

With the unlocked version of the game now available on our website, Android gamers can have fun with unlimited in-game money and removed in-game advertisements. All it takes is for you to download and install the Smashing Four Mod APK on our website. Follow the provided instructions and you’ll be good to go.

For those of you who are interested, you can now experience powerful in-game graphics from Smashing Four. Enjoy responsive and exciting in-game physics, as it allows gamers to further engage in the matchups. Explore powerful skills and abilities with their own visual effects. Have fun playing with the unique characters with awesome looks. All of which will make Smashing Four a lot more enjoyable.

Together with interesting in-game visuals, Android gamers will also have fun with immersive audio experiences, which will keep you hooked to the gameplay.

With simple yet extremely engaging gameplay, Android gamers in Smashing Four will find themselves exploring the awesome in-game levels of Smashing Four to the fullest. Feel free to unlock epic smashy battles and engage yourself in hilarious matchups. And most importantly, always get ready for addictive real-time battles against real players.