If one day your planet is attacked by aliens, what will you do? If you have found many ways to defeat all enemies and you want to perform that, Strike Force will help you. Strike Force is the game of the arcade genre. The game’s full name is Strike Force – Arcade shooter – Shoot ’em up. In the game, the aliens will attack your beautiful planet. So you will have to fight and protect the peace of the planet. There are many interesting things that are waiting for you to explore. Let’s take part in Strike Force now.

Dramatic battles with many colors

Strike Force is one of the games that has been built and offered by OneSoft. They are a game studio that can support you in Publishing, Coaching, Marketing – Monetization and LiveOps, to make sure your products grow to be on top. Strike Force is only available on Google Play. So you only can install the game on mobile devices that run on Android Operating System. And Strike Force is free to download and is just for single player. Also, the players can play Strike Force whenever and wherever. Because the game doesn’t require connecting to the Internet.

Besides, HD graphic is very eye – catching. With Strike Force, you will be taken to many different places. A hot desert with some cactuses, an island is surrounded by sea, a big city with many high – rise buildings, or a mountain with many trees is covered with snow, … Moreover, vivid light effects will take you to the dramatic battles in Strike Force. Light with different colors is shot from many different weapons. The game also allows you to set effect for the aircraft. Three part of the aircraft that you can set effect are Gun, Wing, and Armor. Explore them and create many new aircraft. In addition, the sound of the game is very lively. You will hear the explosions when your aircraft is hit by the enemy’s bullet or the sounds when the aircraft shoots the bullet. Especially, an exciting soundtrack will be turned on while you are playing Strike Force. This will make the battles be more dramatic. But if you don’t want to disturb others, you still can turn off the sound in the Settings. 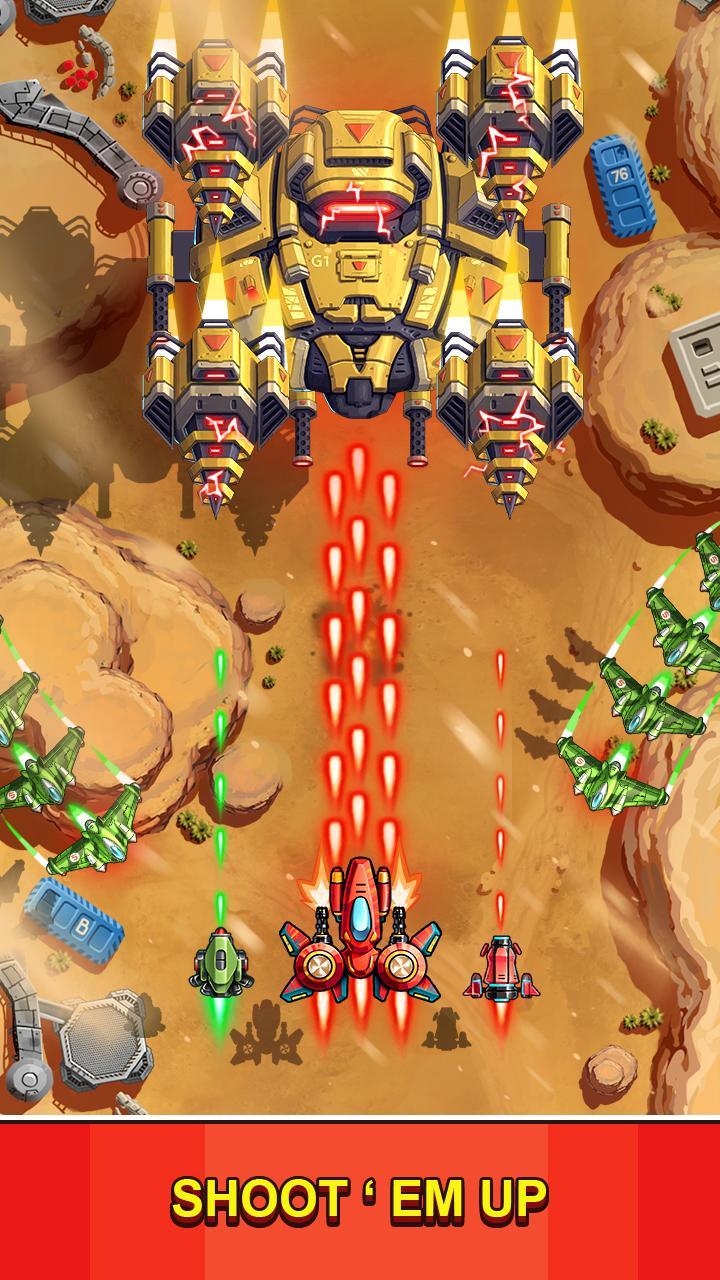 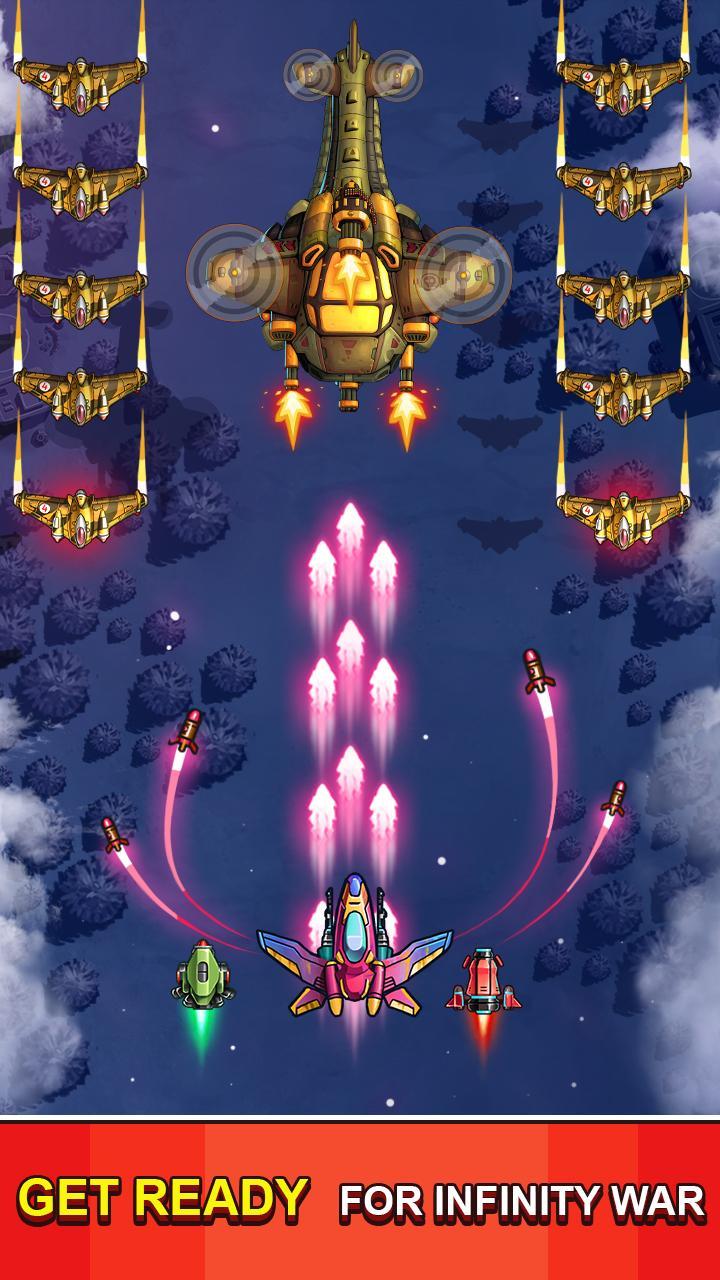 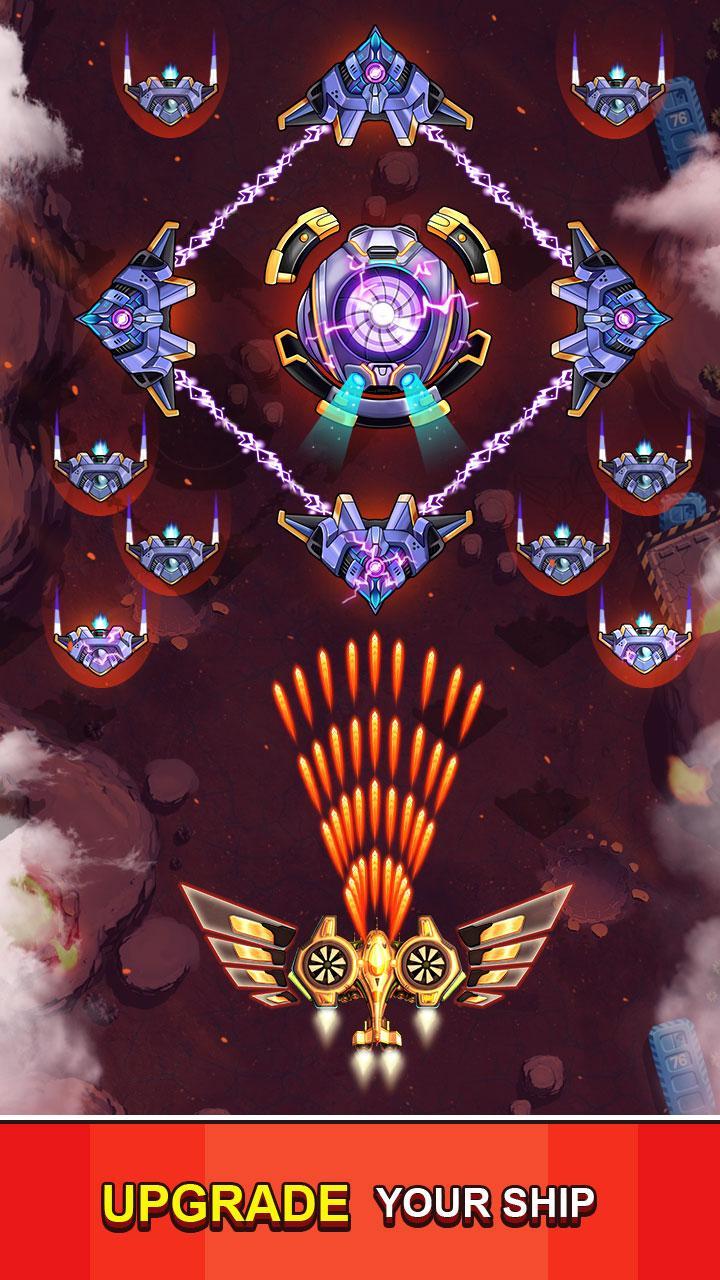 Fight the enemy and protect the planet

In Strike Force, the alien attack is coming. So the player’s main mission is to defeat all enemies. And so that you can destroy your enemy more quickly, the publisher has provided many aircraft for you. There are 12 aircraft that you can use to fight. For example, Linnet, Swallow, Dark Bat Al75, Phoenix PH90, or Dragonfly UV15, … To own one aircraft, you will have to complete a certain level to unlock it. Or if you want to use the aircraft at once, you can buy with by gold coins. Besides, each aircraft will have 6 passive skills. These skills will help your aircraft to be stronger and destroy many enemies more. But in the beginning, the aircraft won’t own all skills. Some skills will be unlocked when your aircraft evolves a new type. Especially, the higher the levels are, the stronger your enemies will be. So you need to upgrade your aircraft to increase their strength. This helps you to defeat many strong enemies.

Besides, the player also can equip many devices and assistants for your aircraft. They will support you in destroying the enemies. Grenade, Burst Gun, Laser Rod, or the assistants such as Mosquito, Bee, Butterfly, and so on. But the maximum number of devices and assistants is 4. So select the devices and assistants that are suitable for each battle. You also can upgrade them to create a strong army. to upgrade, you need to use the coins and diamonds. You can receive them when you have completed a mission or overcome the level. Daily rewards also will bring them for you. Let’s earn a lot of coins and diamonds to be able to create the strongest army. In addition, there are 3 modes at each level. Easy, Normal, Heroic. If you are a beginner, select the Easy mode. But if you want to challenge yourself, you can play the Heroic mode.

For more convenience for the players, Strike Force has supplied two control ways. The first way allows you to swipe the screen to move your aircraft. But with the second way, you just need to touch on your smartphone’s screen to move the aircraft to the position where you want. Select the control way that you feel suitable for you. This will help you to overcome the levels more easily. Besides, the player can change the avatar and name. And the game also has provided some images to change. But if you don’t want to use those images, you can log in to Facebook to use the avatar on Facebook. Besides, there is a chat group in the game where you can talk with the different players. This will help you to know more new friends from different places.

In addition, there are up to 11 languages in Strike Force. These include English, Japanese, German, Korean, Spanish, French, Russian, Arabic, Portuguese, Vietnamese, and Taiwanese. They will help a lot of players in the world to perform the missions and requirements of the game more quickly. And to change a different language, you need to open the Settings of the game and select the flag of the country that you are living in or you know about their language. 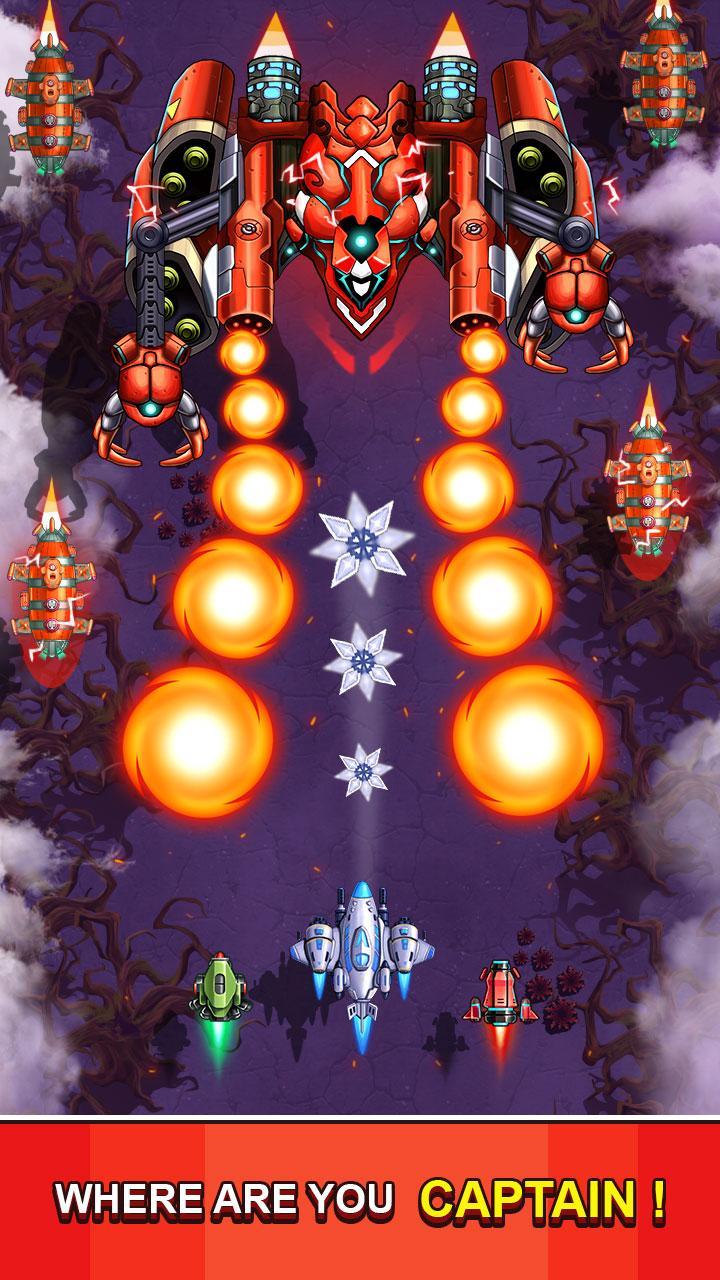 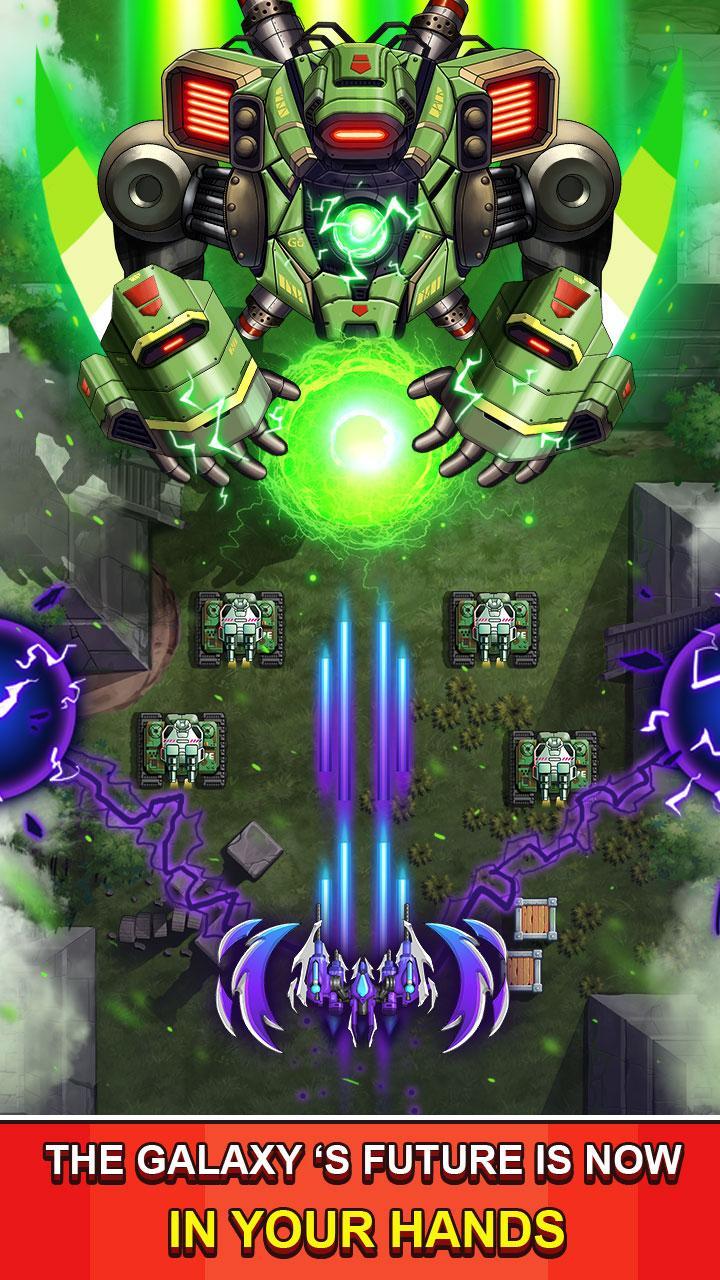 With simple gameplay, the player just need to move the aircraft to shoot the bullets at the enemy and avoid their bullet. Strike Force will be suitable for many players of different ages, from children to adults. Besides, you can create the strongest sky strike force by upgrading your aircraft, devices, and assistants. In addition to the Main Game mode, there are 4 different modes in the game. PvP, Boss, Endless, and War Zone. The PvP mode allows you to fight the different players. Here you will have an opportunity to meet your friends and experience happy moments with them. You also can defeat your opponents to become a space shooter champion. But in the Boss mode, you will have to destroy the strongest enemies. This won’t be easy if your army is weak. So solidify the army’s strength. With the Endless, you will use your skills and agility to fly through the deadly enemy territory, defeat all the alien shooter and rescue your falcon squad. Let’s install Strike Force, explore them, kill all the alien invaders, protect the sky and become the greatest Captain of the Galaxy now.