Teen Titans GO Figure is one of the games that has been built and offered by Cartoon Network. Cartoon Network is the best place to play free games and watch full episodes of all your favorite kids’ TV shows with apps and online videos. Teen Titans GO Figure is available on Google Play, App Store and Amazon. So you can install the game on mobile devices that run on Android and iOS Operating Systems. Teen Titans GO Figure is also supported on tablets like iPad. But you will have to spend less money to buy and install the game ($3.99). And the game is just for single players. The game can contain ads that feature other products, services, shows or offers from Cartoon Network and their partners. So turn off the network connection when unnecessary if you don’t like to watch them.

Besides, HD graphics are very eye – catching and colorful. Characters and expressions on their faces are designed very detailed and lively. The movement of characters also is diversified, from walking, running to fighting their opponents. In addition, the sound of the game is very vivid. Furthermore, conversations of the characters or sound effects when fighting make Teen Titans GO Figure more realistic. In particular, exciting background music will always be turned on during your play process. This will create a dramatic atmosphere for you. But if you don’t want to disturb others, you can turn the sound off in the Setting of the game. 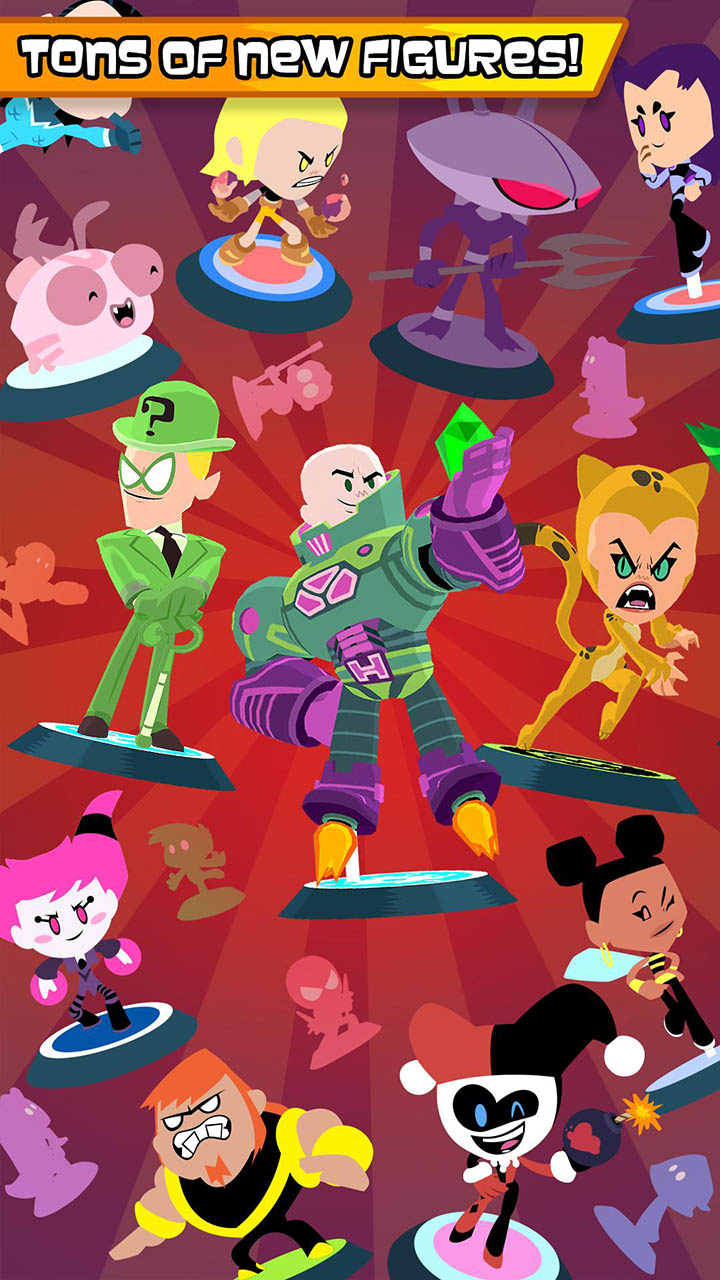 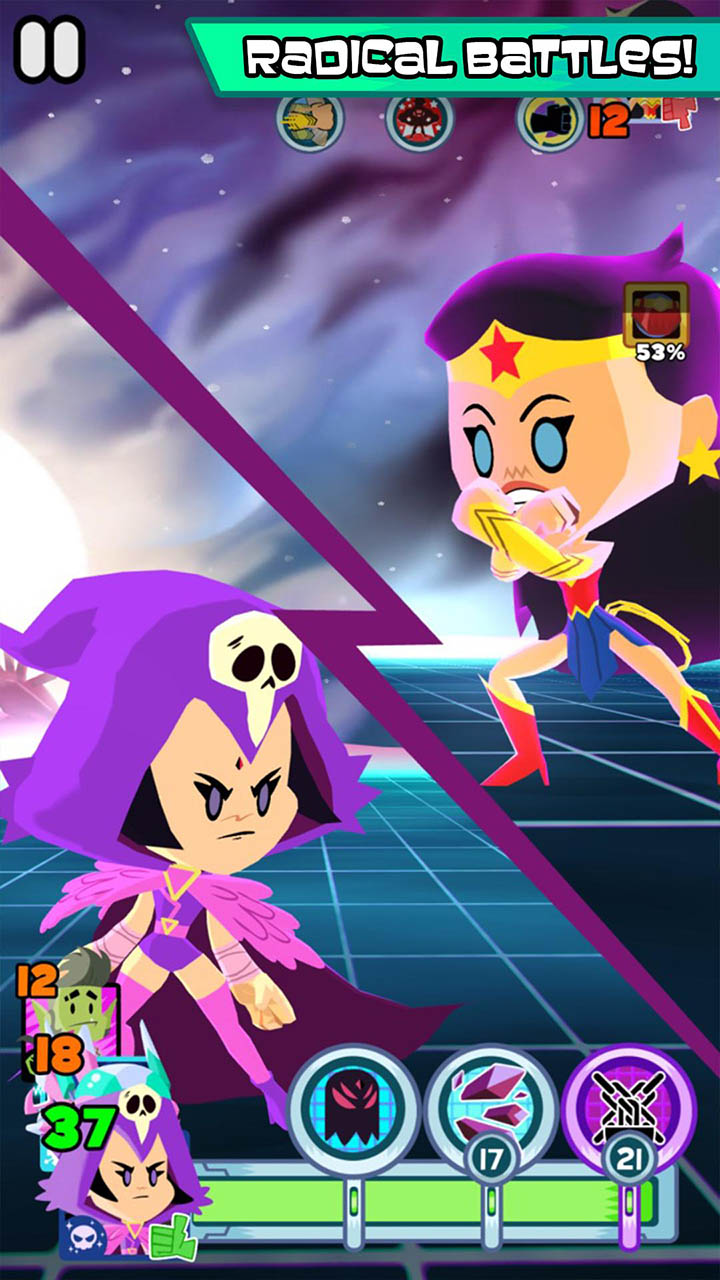 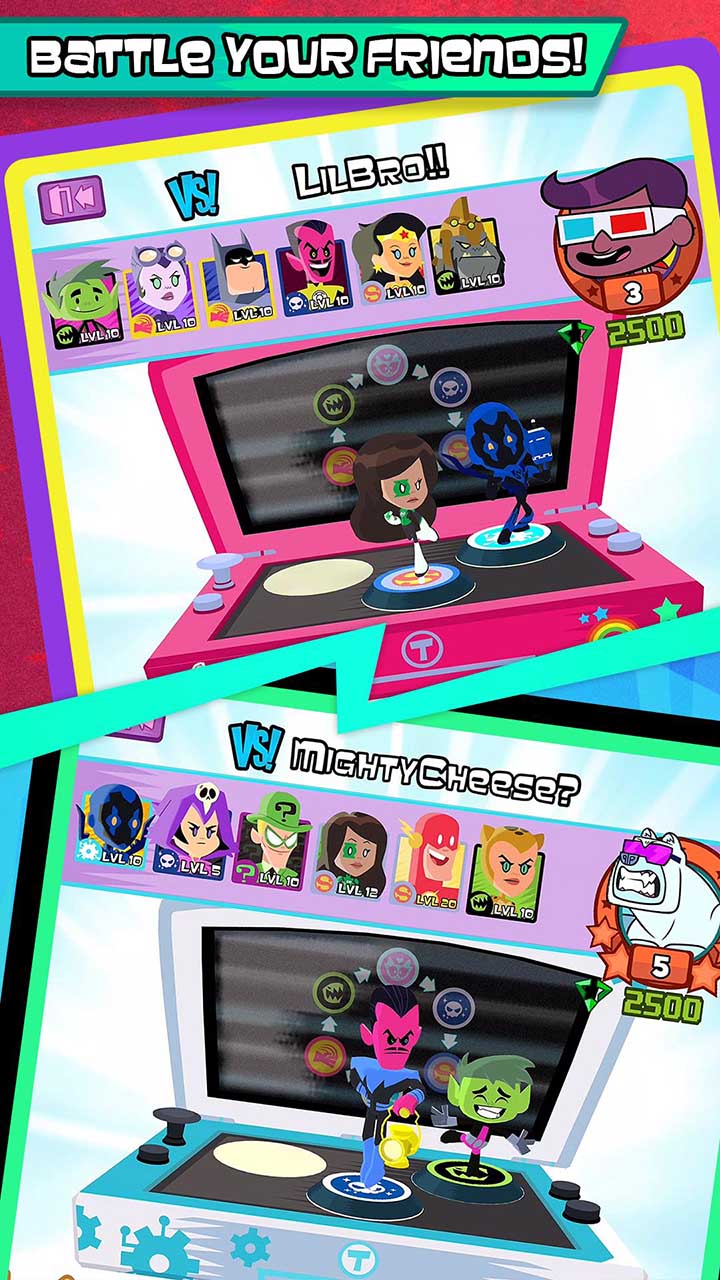 Take part in the battles and defeat your opponents

In Teen Titans GO Figure, you will face many opponents. Each opponent will have their own skills. This will be a big challenge for you. You need to gather many superheroes to fight your opponents. And to help you to create a superhero team, the publisher has provided over 100 Teeny Tiny figures in the game such as Batman, Superman, Wonder Woman, Flash, the Radical Titans, Radical Robin, and many more. Each figure also will have their own abilities. For example, Robin will have the Heroic Pose ability. When you strike a heroic pose, the power of the next ability will increase. Besides, the game also allows you to level up your figs to unlock even more powerful abilities. You also can upgrade the figures’ strength and health by the cards that you will receive when you win a victory.

In addition, the players also can customize your squad. This allows you to change your figures’ appearance. Each figure can be repainted in different ways. And to customize your squad, you need to use gold coins to buy new colors. Moreover, you also can swap the character abilities to make your team truly unique. Busting out accessories like the Bat Signal and Superman’s underpants can give you the edge in the battle. Furthermore, when playing Teen Titans GO Figure, you will have an opportunity to go beyond Jump City. Here you can explore Metropolis, Gotham and Jump City to buy your favorite superhero figures. At the same time, you also must complete special missions for DC heroes. And you can enter tournaments at iconic locations like the Hall of Justice and the Batcave. They will make your experiences newer.

With Teen Titans GO Figure, you can play the full story mode as any of the Titans. There will be 5 Titans so that you choose. The first Titan is Robin. Robin is a leader of the Teen Titans. He always takes care of his team and has an affection for Starfire. Cybord is the second Titan. Cybord is one of the oldest Titans. He has a penchant for building machines and grilling fine meats. The third Titan is Raven. Raven may be a powerful half-demon, but she is perhaps the most sensible and mature member of the Teen Titans. Of course, that doesn’t stop her from sometimes getting wrapped up in zany Titan antics.

Starfire is the fourth Titan. Starfire is an alien princess from Tamaran. Despite having now spent a good deal of time on Earth, she’s still learning the ways of this planet and discovering everything it has to offer… like adorable kitties. And Beast Boy is a carefree and often mischievous Titan with the ability to transform into any animal he wants. Beast Boy is also the last Titan. In particular, each Titan has a unique dialogue and original voiceover from the cast of the show. This is an interesting point in Teen Titans GO Figure. 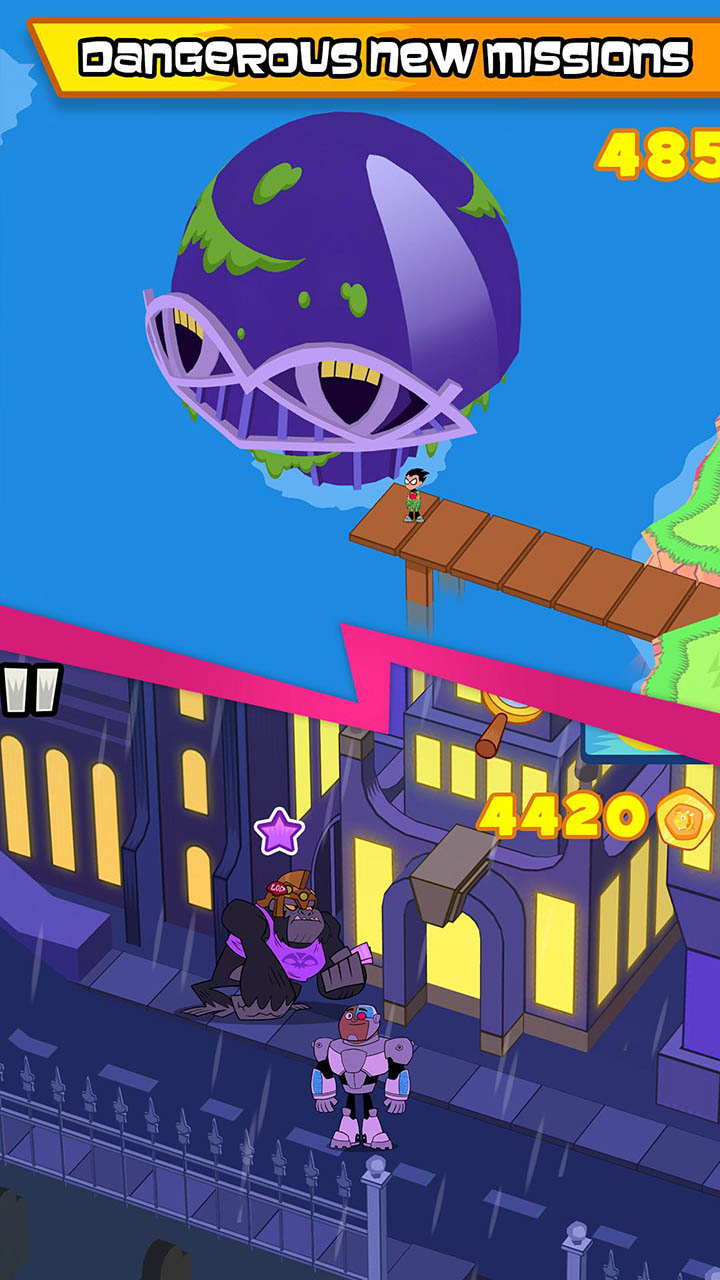 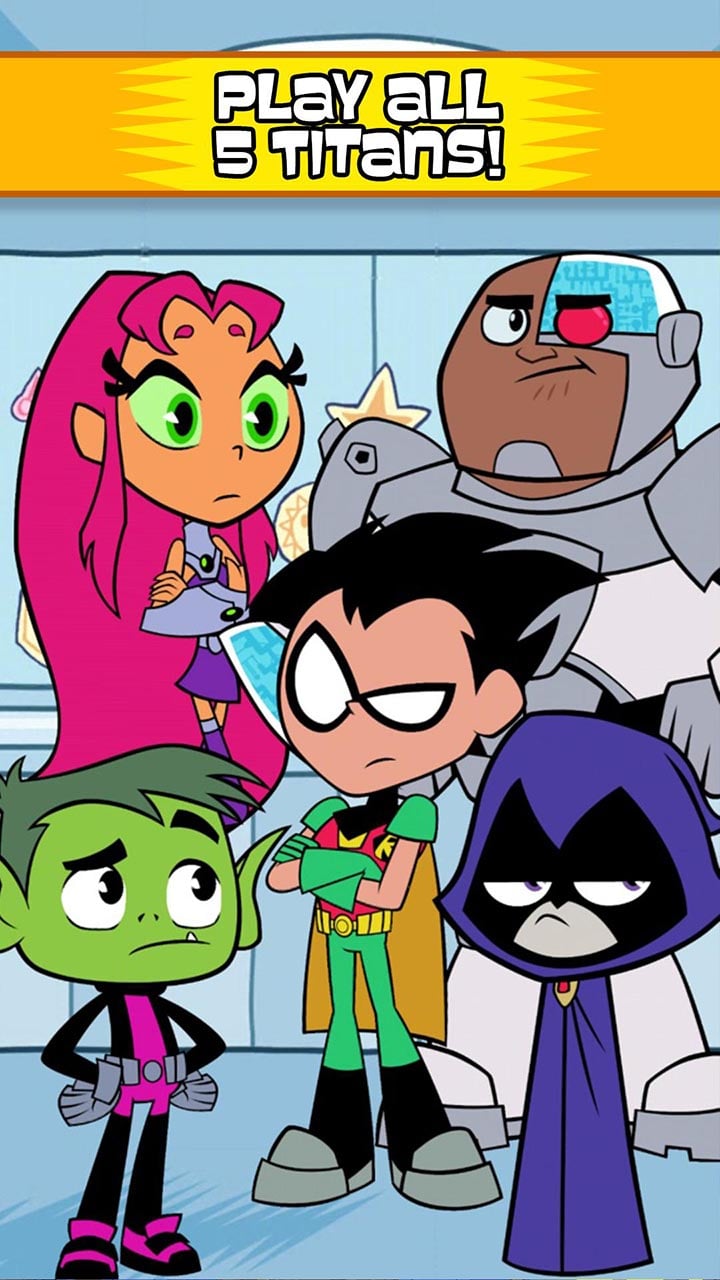 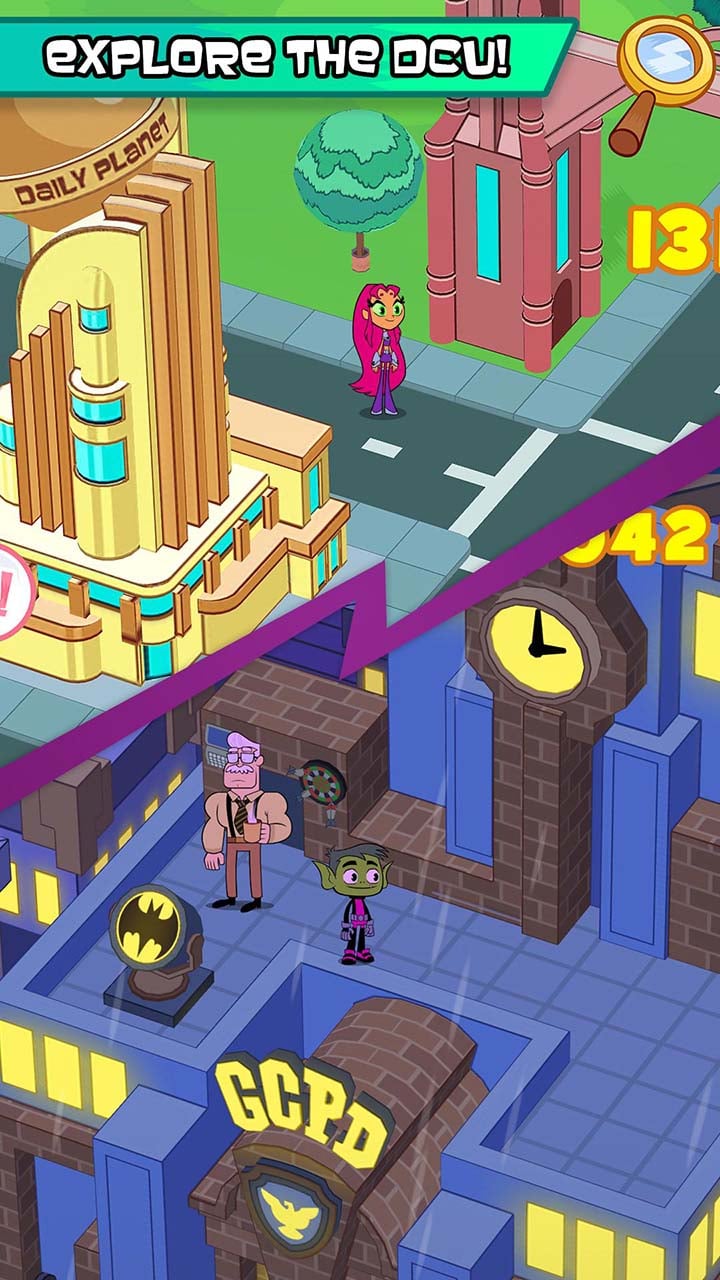 To support the players, Teen Titans GO Figure is available in 7 languages, including English, French, Spanish (Latin American), Portuguese (Brazil), Russian and Turkish. They will help a lot of players in the world to understand what the characters are talking about and complete the missions of the game more quickly. And to change another language, you just need to open the Settings and select the languages which you want to use. In addition, Teen Titans GO Figure doesn’t require connecting to the Internet when playing. Therefore, you can play the game wherever you want without worrying about Wi-Fi, 3G/ 4G. Besides, the publisher also has designed the Multiplayer Beta for the game. With this mode, you can challenge other players or even your friends to teeny battles. Moreover, you also need to rank up to unlock Legion of Doom figs. They will bring many surprising things for you. Let’s join in Teen Titans GO Figure, battle your way to the bottom of the mystery and enjoy happy and relaxing moments that the game will take.