Rhythm games are one of the most popular genres that people always fall in love with VR headsets. Thus, a lot of them would see them as being a bit too hard to play, especially when you’re not a veteran player. Beat Blade can change your mind by allowing you to experience a collection of songs on a smartphone only.

There are a few ads around here, but beautiful graphics can make up for them. With intuitive controls, the overall game lets you play through a whole host of new fun songs that will get added most of the time. Imagine that you’re playing a musical instrument while playing Beat Blade. This is an excellent example of that – a free rhythm game to jump into with minimal commitment.

Beat Blade is a rhythm game that can be tough and it might let you go through the harder challenges, but this happens when you haven’t played this genre before. It doesn’t only challenge you to the famous music library, but also make you feel like being in the VR Beat Saber. And in front of some crazy songs, you must perform intricate motions fast.

The added difficulty some players would have come from their small mobile phone screen, making it harder to finish any performance. But remember that no matter if you do anything, practice makes perfect even on the mobile platform. Overall, Beat Blade has a fantastic design and idea as well as owns a large number of decent songs.

And guess what? Beat Blade is one of the best rhythm games you can play a little every day. Feel free to enjoy a song you might love while getting used to its mechanics. As compared to other games of the genre, this needs to improve stability. You should know that a few songs own various paths and patterns, and when it’s ready to hit a large scale of notes, it begins shuttering.

It’s unacceptable to have this issue in such a title, particularly when the game shutters and freezes at the same time. We’re sure that it should have an urgent update in the stability, even some scene models are recommended to get easier than how it’s made. Besides, a few songs appear impossible to get achieved since here it’s not about VR, but you just use little devices, and your hand will cover the entire process.

Besides, coins play a crucial part in the Beat Blade game. With them, you can purchase more new songs and even cosmetics. But how to get coins from the game? Go to get them more from the Beat Blade shop, with 4,000 for $1.99 and 10,000 for $6.99. So after having money, let’s unlock your favorite songs that range between 499 and 1299 coins.

Go to earn 200 coins by only watching an ad that lasts 15 seconds. Or go to earn more coins by simply playing the game, achieving good combos, and setting up the meter at the top of the game screen. Trust me, Beat Blade is a fascinating music runner game that delivers stunning neon levels and 2020 hit songs.

By using one thumb only, you can control the characters and then chop all the blocks as well as avoid the traps as fast as possible. Sure enough, always reach the end of the track to win over the game. No doubt, its gameplay resembles Sonic Cat, an innovative game that mixes the fanciest melodies with finger movement. Just let the sonic road shine your heart and you have to find your shining rhythm. 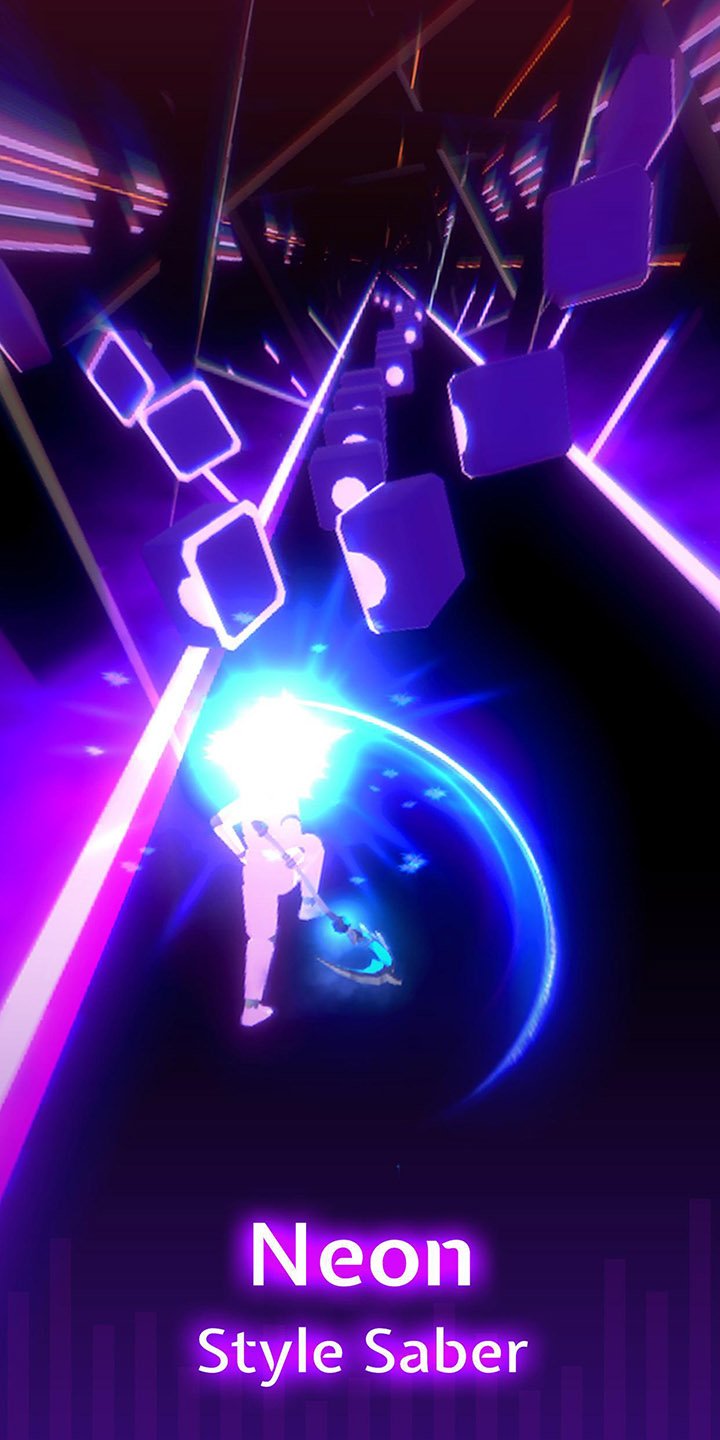 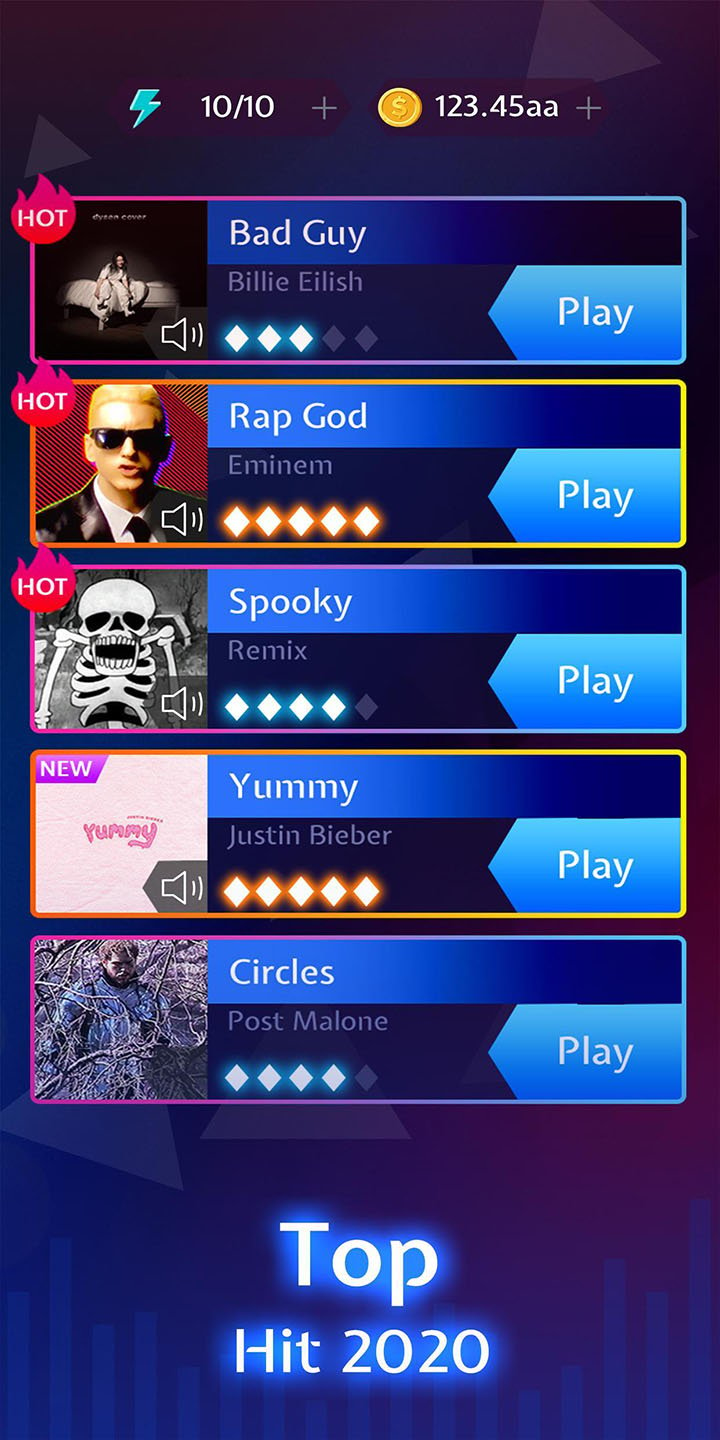 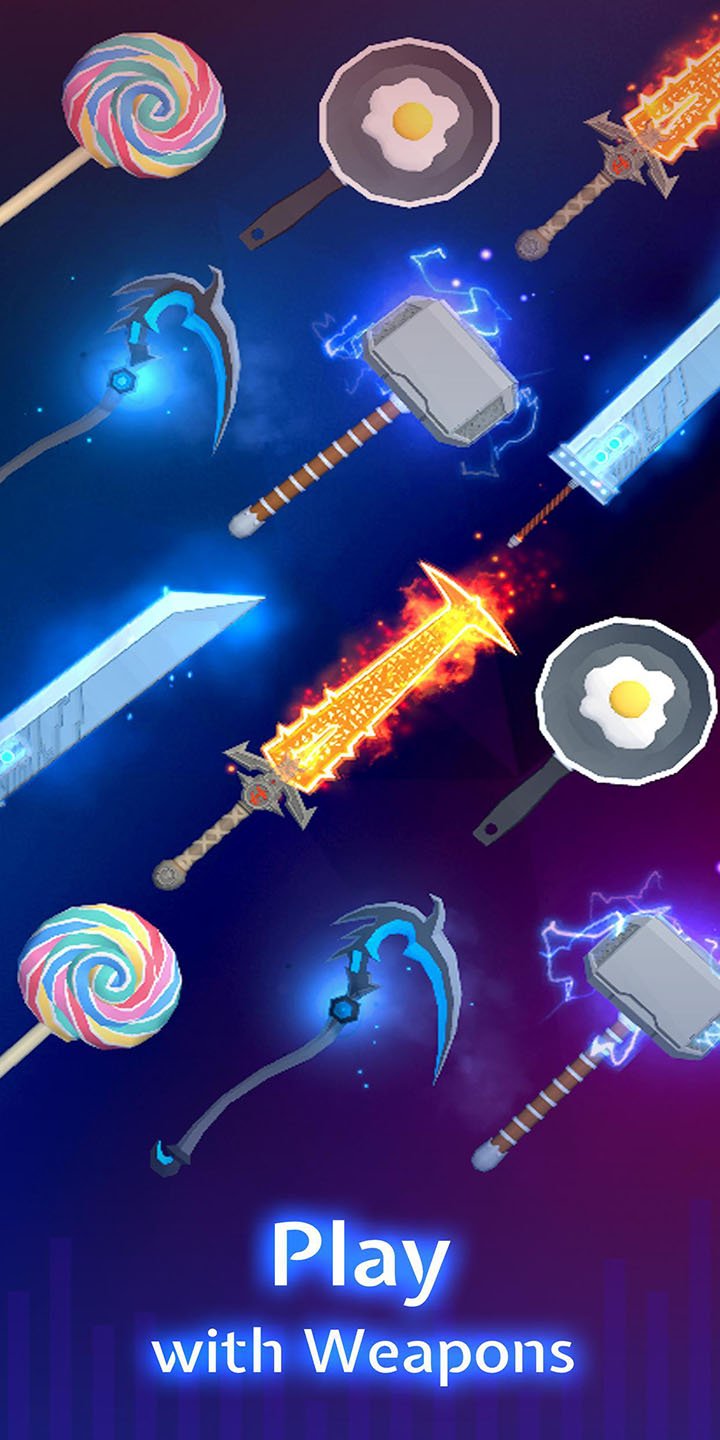 The gameplay feels pretty good to experience, and you will love it when being able to adjust the sensitivity, graphics, sounds, and more than that. According to some players, it would be more badass if the developers agree to add a few of these songs: Love Scenario by iKON2, Tempo by EXO, How You Like That by BLACKPINK, and Psycho by Red Velvet.

Besides, you might not expect the visual of this game to be this good. In Beat Blade, each weapon skin owns its effect. While some people find it a bit annoying to deal with ads, some others don’t have problems with ads since this game is good enough for them. However, they love to add more custom songs as well so that the players can play those songs from their devices.

It’s the music and rhythm that brings the best from this game. Well, they match each other perfectly, which creates such a masterpiece. The music is simple yet appealing to keep you in a calm and controlled manner while you’re gaming. You’ve got to challenge yourself through different levels of difficulty, from super easy to harder. This is also a good way for us to learn the music we love by repeating the same song.

Like most rhythm games, the only objective of Beat Blade is pretty simple. It’s all about slicing or slashing any icon showing up on the screen, building up the meter and gaining coins. Luckily, your characters will always run, and to hit the right icons, let’s move the character from side to side, blocking the icons right from the moment they appear.

Note that the more icons you successfully hit in one row without missing even one, the larger the combo becomes. Of course, the faster the meter tends to build up. Along with these, you also have to stay away from some obstacles ahead, and once hitting them, the run will get over. As this happened, go to watch an ad to keep moving.

Also, don’t forget to use the coin you make to unlock more songs, and receive various blades. It’s also essential to bear in mind that different songs could vary in difficulty – easy – medium, hard, expert, and insane. Ensure you have enough energy to spend, and to decide how many songs you can play through each day. 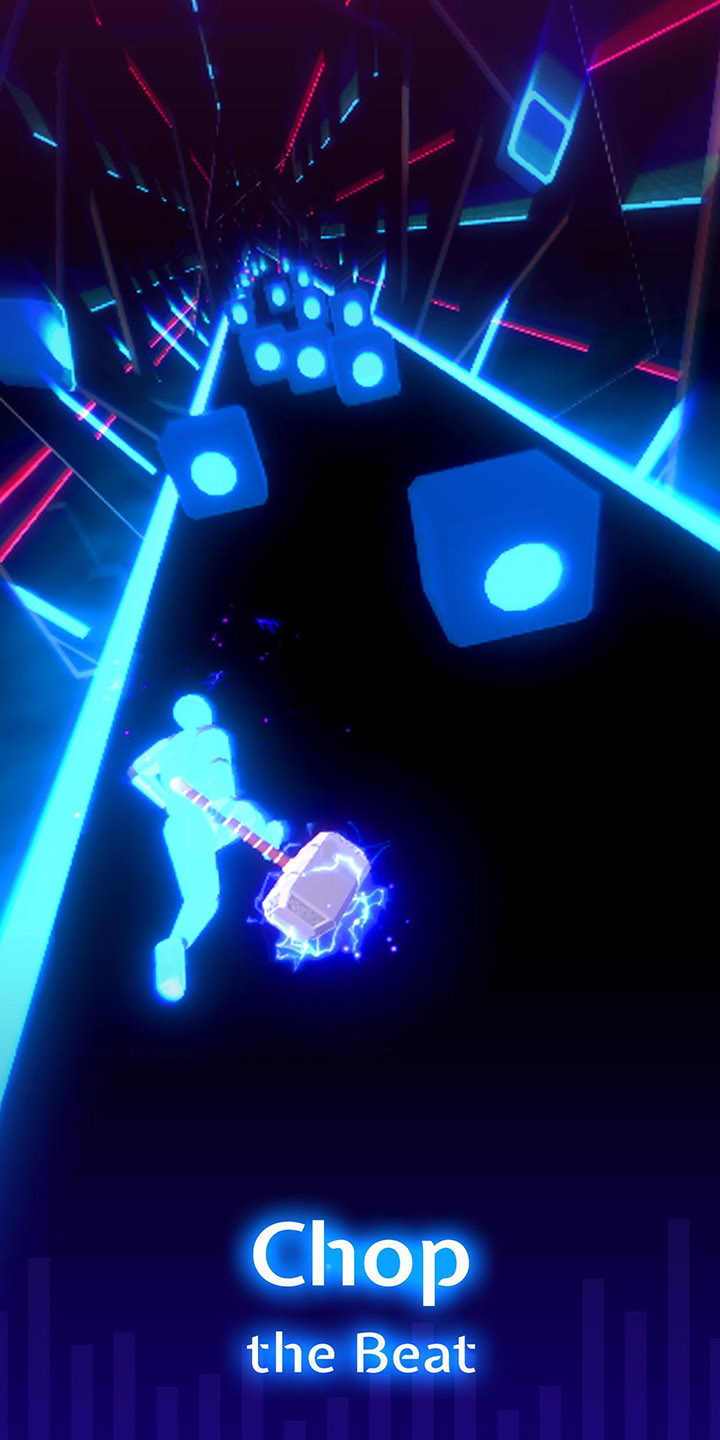 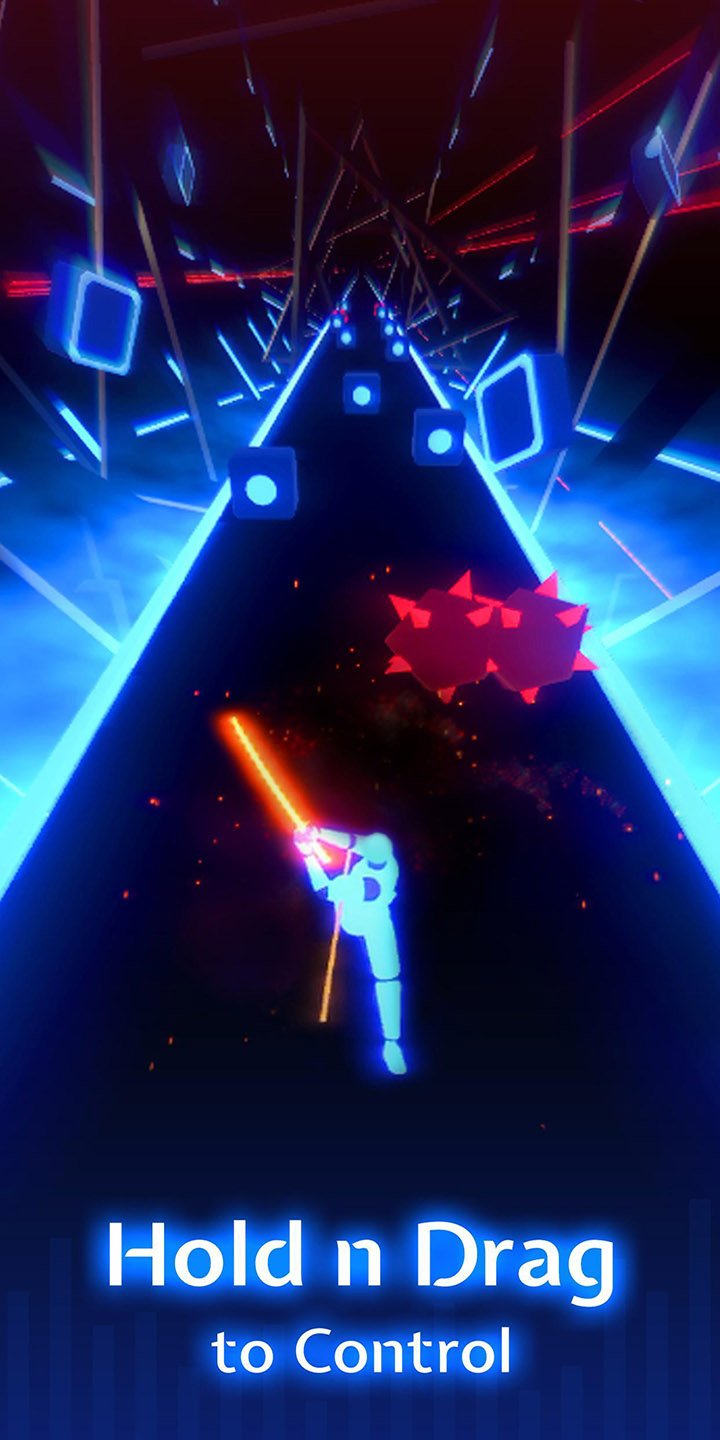 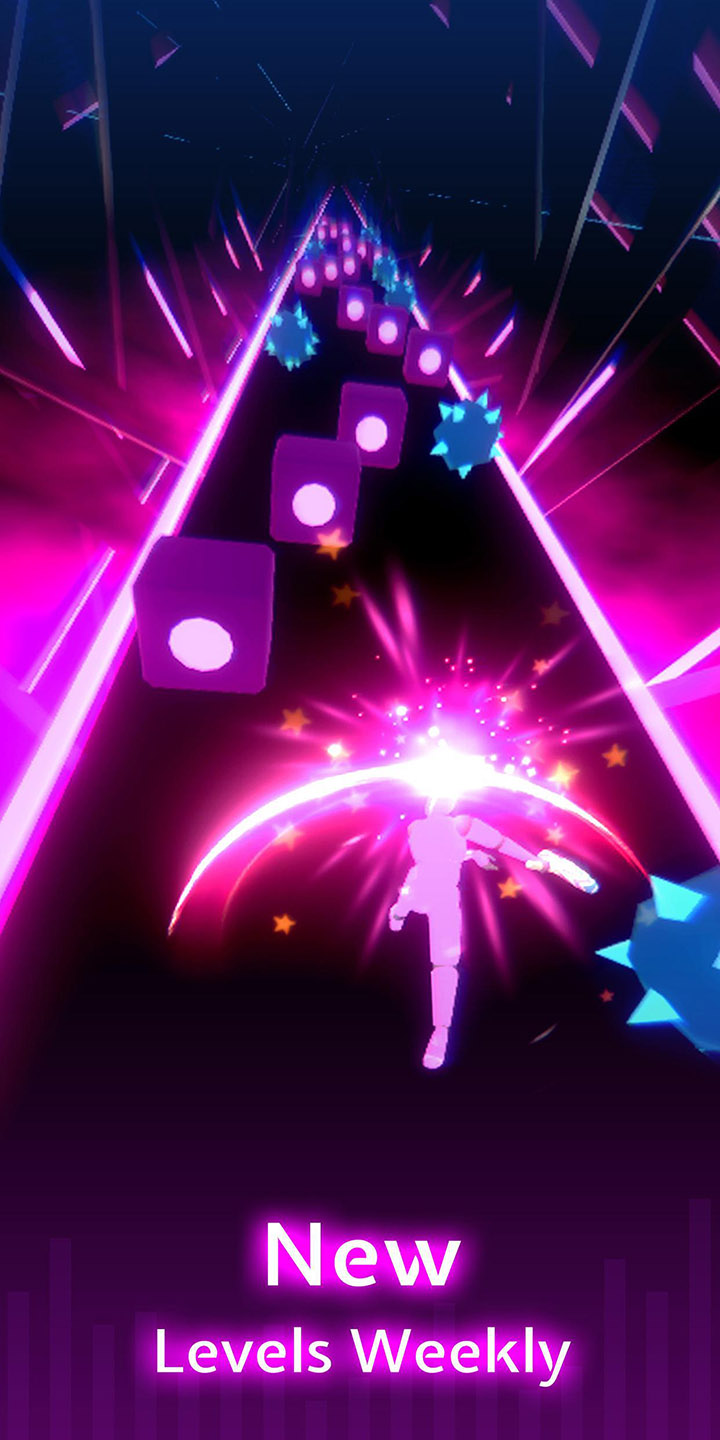 Beat Blade has cool graphics and addictive gameplay. We’re sure that you will fall head over heels with the design of the little character in the game. The other textures might use some intricate work as well.

At times, some white and colored boxes mix up with one another, which messes up the whole gameplay or makes it hard for you to see where you need to move your character. To be honest, the game has big potential, and once fixing the lag when you move the character and adding custom songs would make this a badass mobile rhythm game.

In Beat Blade, you will understand how tempting it is to touch the character or right above them on the screen. But you soon see the challenges while struggling to view what icons and obstacles are coming towards your character.

The game gives you a feeling like learning how to play an instrument. You must adjust to its mechanics and get accustomed to the songs. Last but not least, always touch at the bottom of the screen so that your view can’t get obstructed with your hands on the screen.