The description of Cut the Rope MOD APK 3.45.0 (SuperPower/Hints) Cut the Rope is an entertaining 2D game, and you’ll follow Om Nom in a legendary puzzle adventure. The game also features other works, like the cartoon “Om Nom Stories” and other great entertaining videos. The content begins about a mysterious package, and you help the little monster inside. You try to drop the CANDYs into the blue monster’s mouth. You also collect gold stars, discover hidden prizes, and unlock exciting new levels in the game. Fun physics-based gameplay, and award-winning addictive gameplay such as: BAFTA Award, Pocket Gamer Award GDC Awards, … Get ready to conquer 17 boxes with 425 exciting levels. Amazing creative physics gameplay, with lots of lovely characters. Although the 2D graphics are simple, the images are sharp and extremely cute.

Cut the Rope is about the cute Green Frog, and the frog loves to eat sweet candies. The game is famous all over the world and is loved by a lot of people. The player’s task is quite simple. You find ways to cut the ropes so that the candy can fall in the correct position of the frog Om Nom. The game has extremely eye-catching graphics, vivid sound and more than 100 different levels for you to freely show off your puzzle skills. The game emphasizes puzzle-solving, and has a very realistic physics foundation. The game is produced by Russian developer ZeptoLab. Up to now, the game has released many different parts such as: Cut the Rope: Experiments (2011), Cut the Rope: Time Travel (2013) and Cut the Rope 2 (2013).

Cut the Rope features addictive gameplay. Your task is to put the sweet candy into Om Nom’s big mouth – a tiny green monster. Besides, you must collect as many stars as possible. The game has achieved more than several hundred million downloads globally. If you want to bring candies to Om Nom, then you need to cut off the ropes by swiping over them. In addition, the game has a lot of other objects such as airbags, bubbles, magic hats, lanterns, … The game is not easy, and you need to put the candy through the obstacles, and come Om Nom’s mouth. Each level will have obstacles or support items. You need to do everything to achieve a result of 0 to 3 stars depending on the score, and the time it takes to complete the level. After a while, you use the money to buy “Super powers” to make controlling the candy easier. The game also has another interesting thing, which is the 18 hidden pictures of Om Nom. 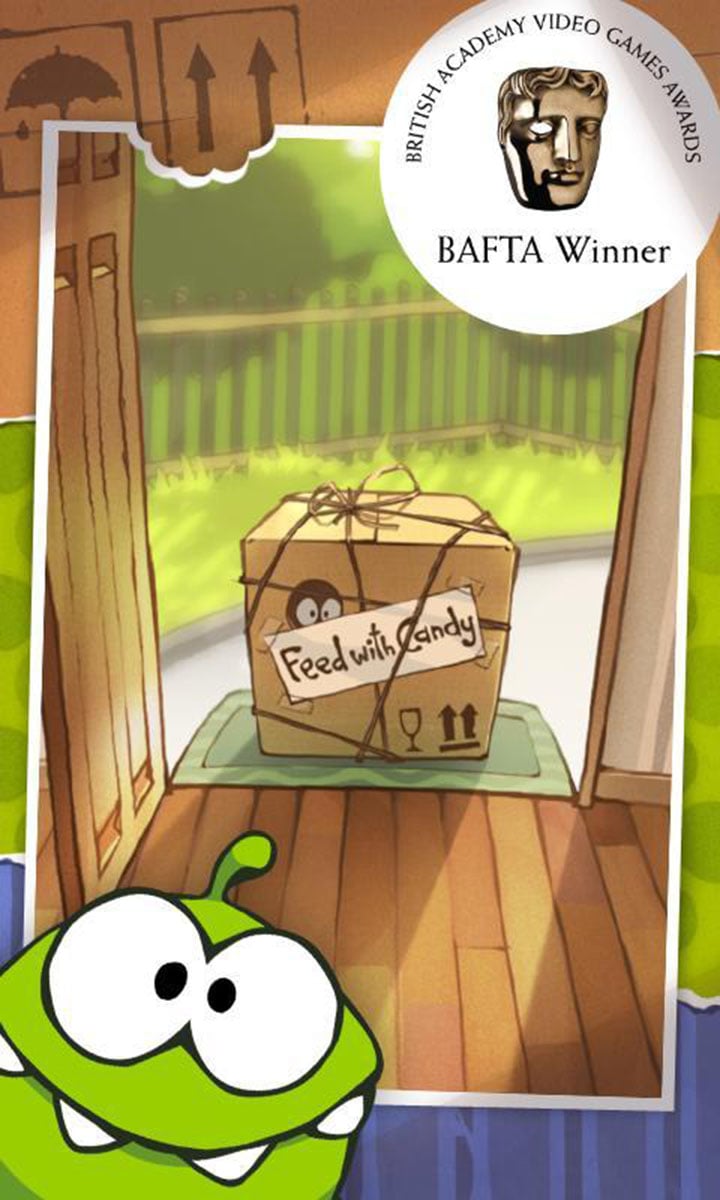 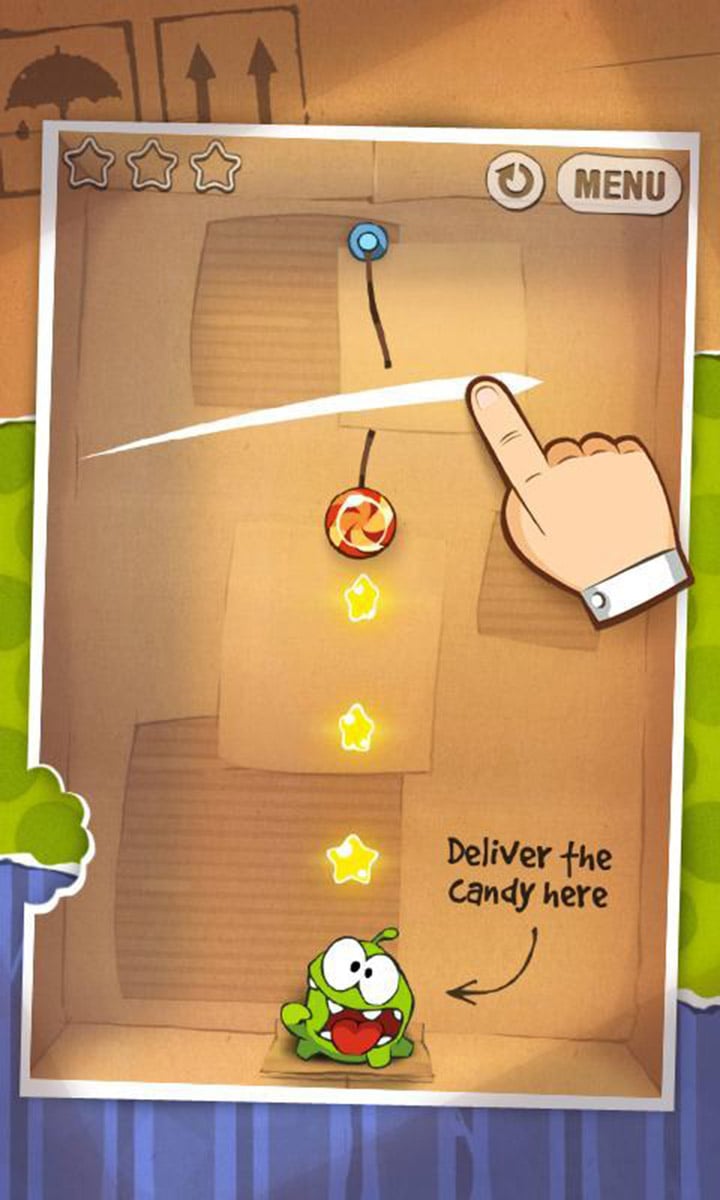 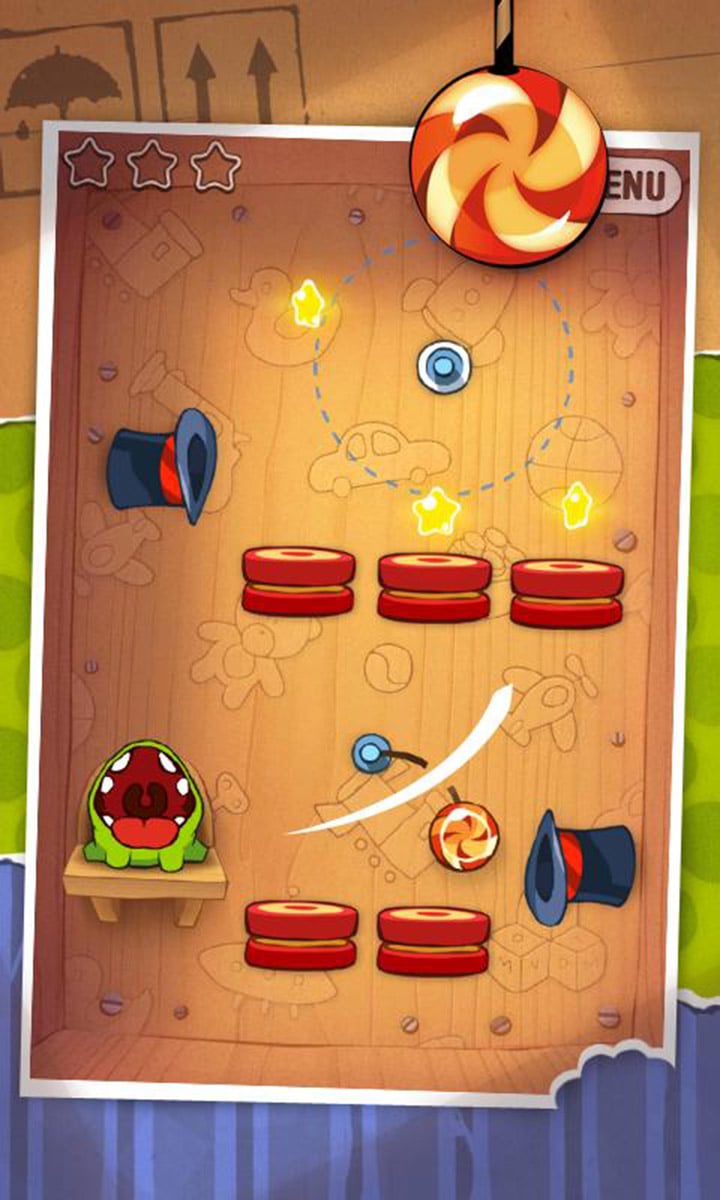 Cut the Rope is a puzzle genre arcade game. All are based on real physics, and the game is produced by Russian developer ZeptoLab. The game includes many other parts such as: Cut the Rope: Experiments (2011), Cut the Rope: Time Travel (2013) and Cut the Rope 2 (2013). Your task is to help put the candy in Om Nom’s mouth – a tiny green monster, and you must collect as many stars as possible. The game has achieved more than several hundred million downloads. The game is entertaining, but it is extremely challenging. The only task of the player is to earn a lot of stars, and help the green frog Om Nom with candies. The game has simple gameplay, but the challenge is extremely difficult, and the difficulty increases with time. Try to get the candy that could fall into Om Nom’s mouth. However, the player must also earn the most stars to score high scores. The game is based on realistic physics principles, so the gameplay will not be limited. Players need thinking, imagination, and the ability to combine movements to succeed. The game has fun graphics, vivid sound and Om Nom kute character. The game also has the ability to inhibit players, and you must always try to win.

Cut the Rope groups levels into “boxes” or “level packs”. Almost every box contains new obstacles and items to challenge players. The new “boxes” are regularly updated through the updated function, so players always have a great experience. The game received many positive reviews from experts. The game is universal for everything, and is just as addictive as Angry Birds. The game has good puzzles, and you have plenty of touch control experience, cute and personality. The game is fresh, challenging, and entertaining.

Cut the Rope has quite simple gameplay. The basic task of the player is to use any means to bring the candies to the position of the frog Om Nom. You use your finger to slide across the screen to create drag, slide to cut the ties. You activate the objects in the level, or break the ball to free the candy. You face countless obstacles and obstacles. The candy’s journey to the frog’s mouth is not going to be easy at all. In addition, you need to collect stars in the game screen. The game has 3 stars randomly appearing in the game screen, and you must bring the candy to the belly of the gluttonous Om Nom. In addition to the challenging gameplay, the game also has cartoon clips about the extremely lovely Om Nom frog. The videos will be great entertainment, and full of fun for you after challenging and stressful challenges. The sound of the game is fast and playful, creating a sense of relaxation, and extremely entertaining entertainment. You will hear a delightful “ting ting” sound when the frog Om Nom is fed. Graphics have bright tones, images are designed extremely funny. Om Nom frog is designed to be simple and has a cute and mischievous look. The game also has effects when you perform actions such as cutting strings, breaking bubbles, or creating lightning flashes.

In short, Cut the Rope is a great choice for your spare time. The game has puzzles that are not too difficult, but also has great challenges. The game will help you train your thinking ability effectively. If you love puzzle thinking games, get ready for an exciting adventure with the frog Om Nom. 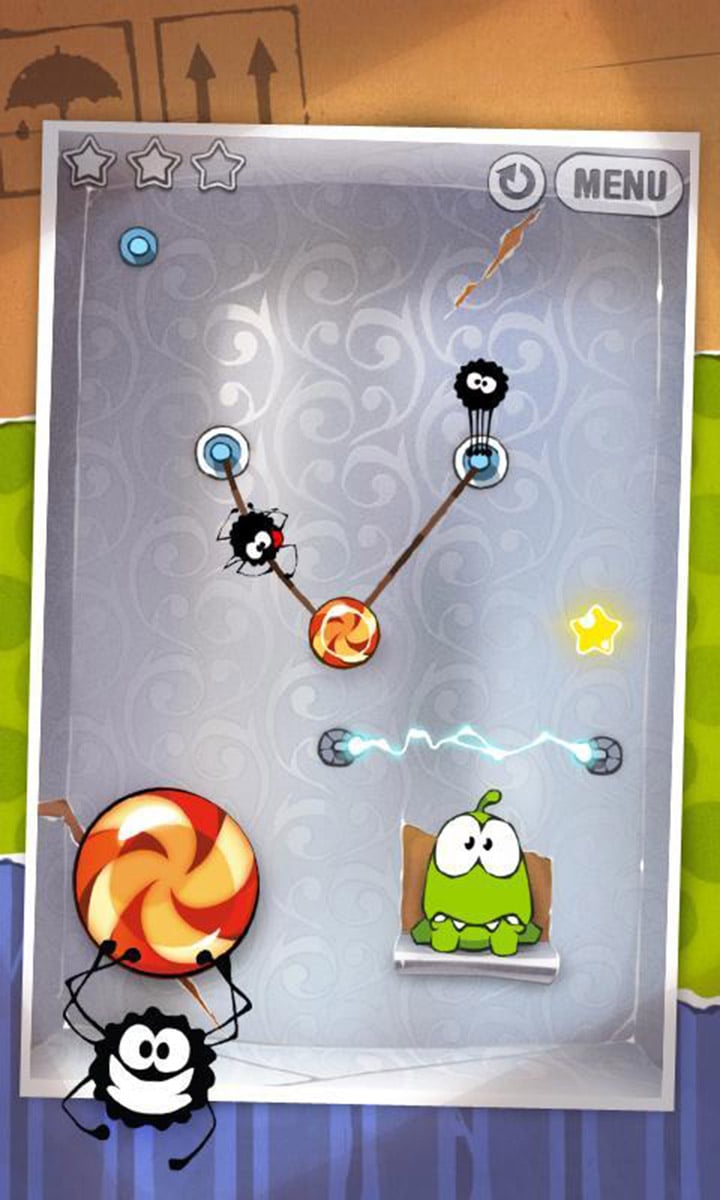 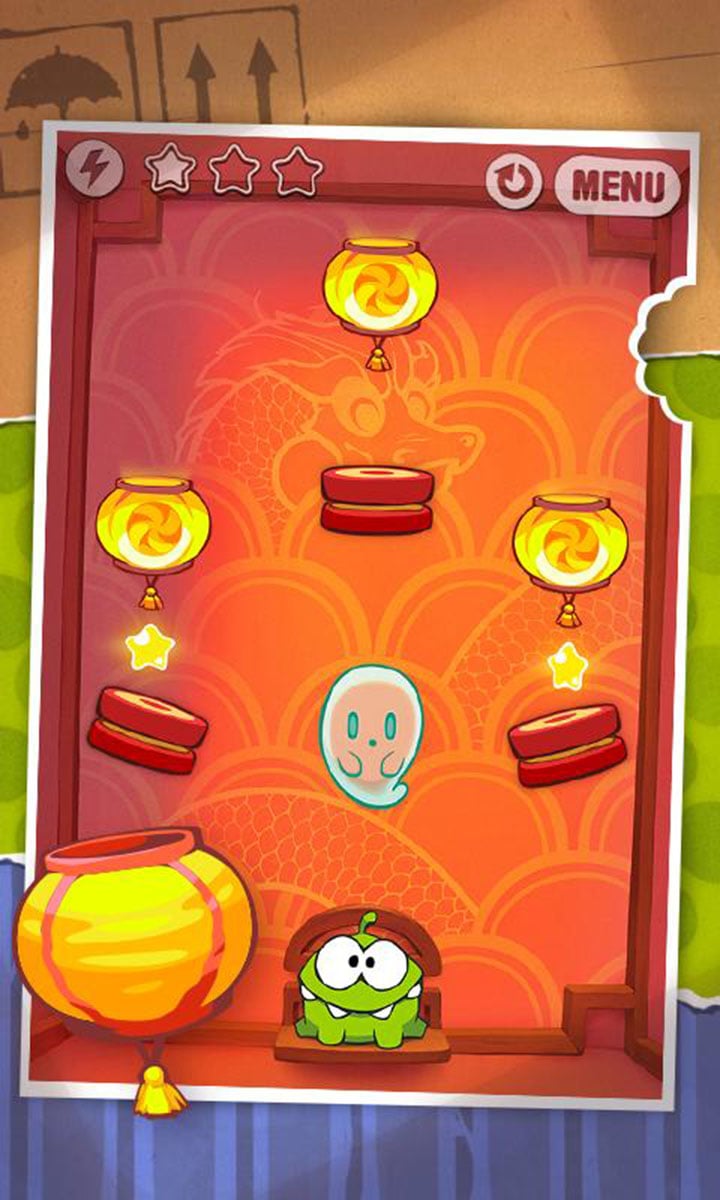 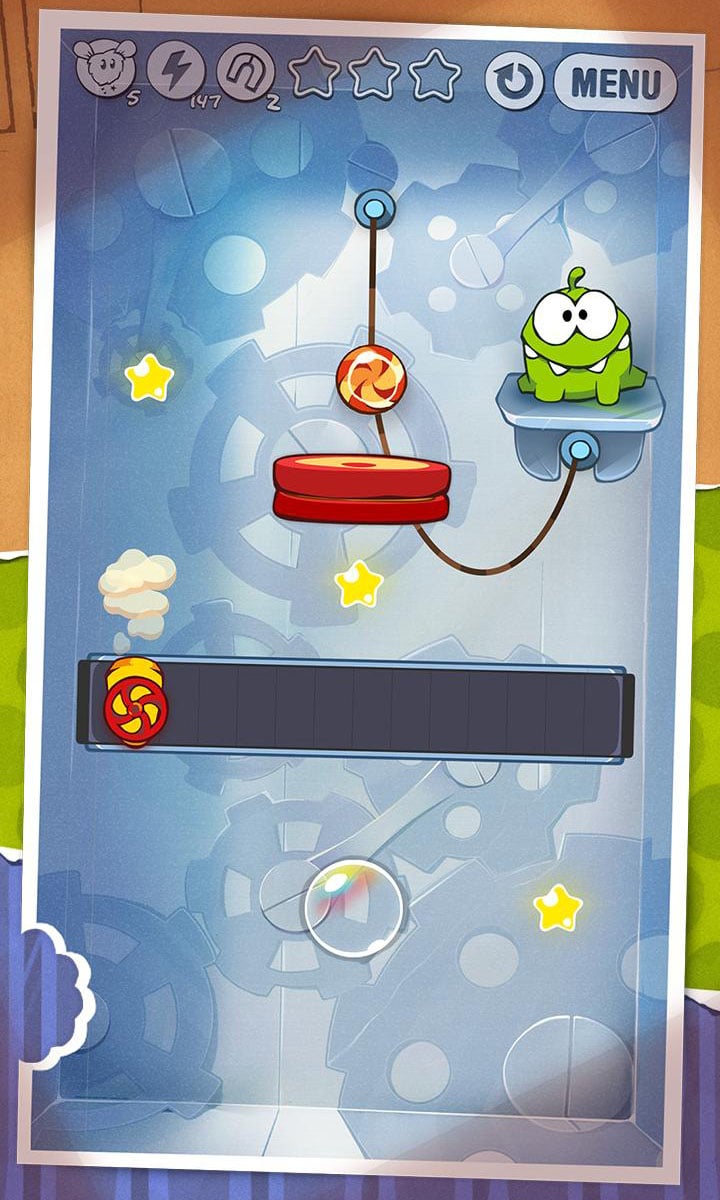