If you have a dream of becoming the hero, the game will help you to do it. That is Dash Quest. Dash Quest has an action and adventure genre. In the game, a player will become the hero, fight monsters and regain peace of the world. And at the same time, the player also will pass through many different places. Dash Quest will bring many interesting things for you. Let’s start to explore them.

Dash Quest has been built and offered by Tiny Titan Studios. They are a game developer and publisher based in London, Ontario, Canada. You can install the game on mobile devices and tablets that run on Android and iOS Operating System. Dash Quest is available on both Google Play and App Store and free to download. The game is just for simple player. You can play Dash Quest anywhere you want because the game doesn’t require connecting the Internet.

With some games, the scenery of the game won’t change. But in Dash Quest, each level has their own scenery. You will fight the monsters at many different places. For example, a forest with some trees and flowers, a palace with a lot of candle or a cave with some gems, … Especially, battles can take place in the morning or at night. This will make the battles be more interesting. Moreover, the monsters are very variety. The players will meet snakes. goblins and mushrooms that is walking in battle 1. But when you have win battle 1, you will fight against ghosts, spiders and zombies that is equipped a weapon.

Besides, the game’s graphic is a classical design. So there are no guns, bullets or vehicle in Dash Quest. Instead, the character will be equipped a sword – The weapon was made a long time ago. And your character will move by running. This will make the battles not be too dramatic. In addition, sound will make the battle become lively. You can hear the sound when the character uses their skills. Soundtrack is always turned on during the game. But you still can turn off the sound in Setting of the game. 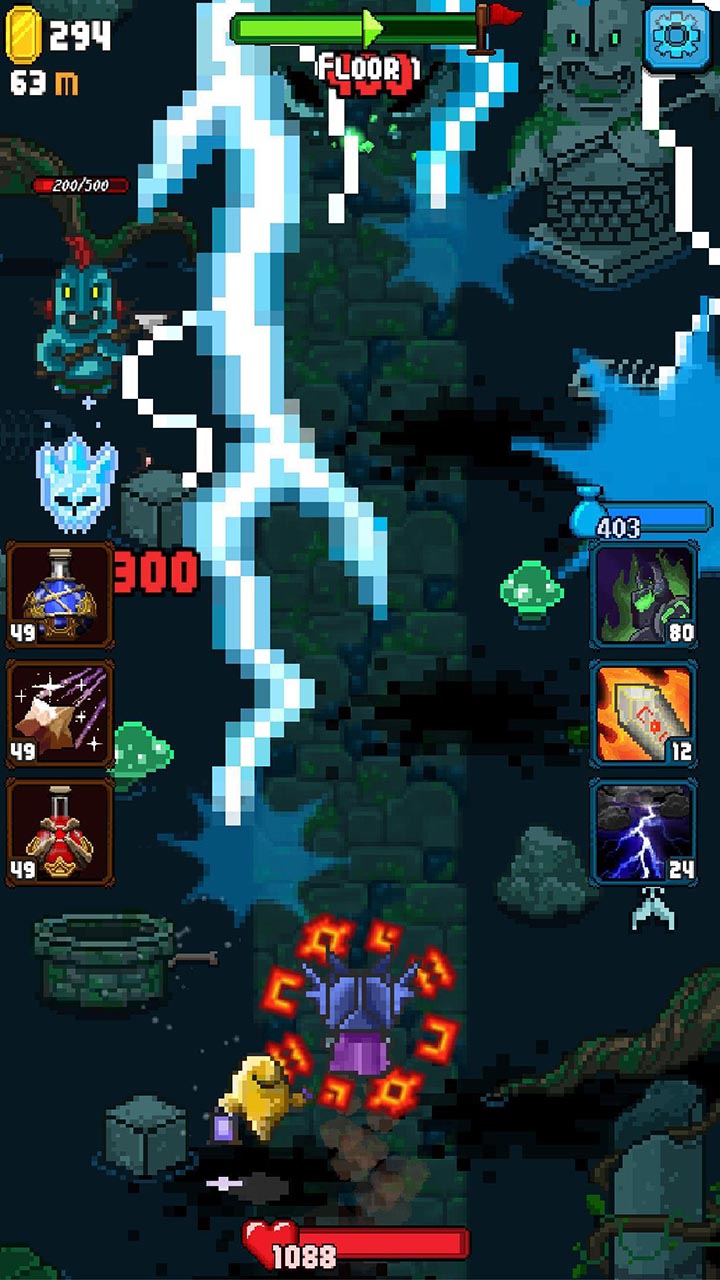 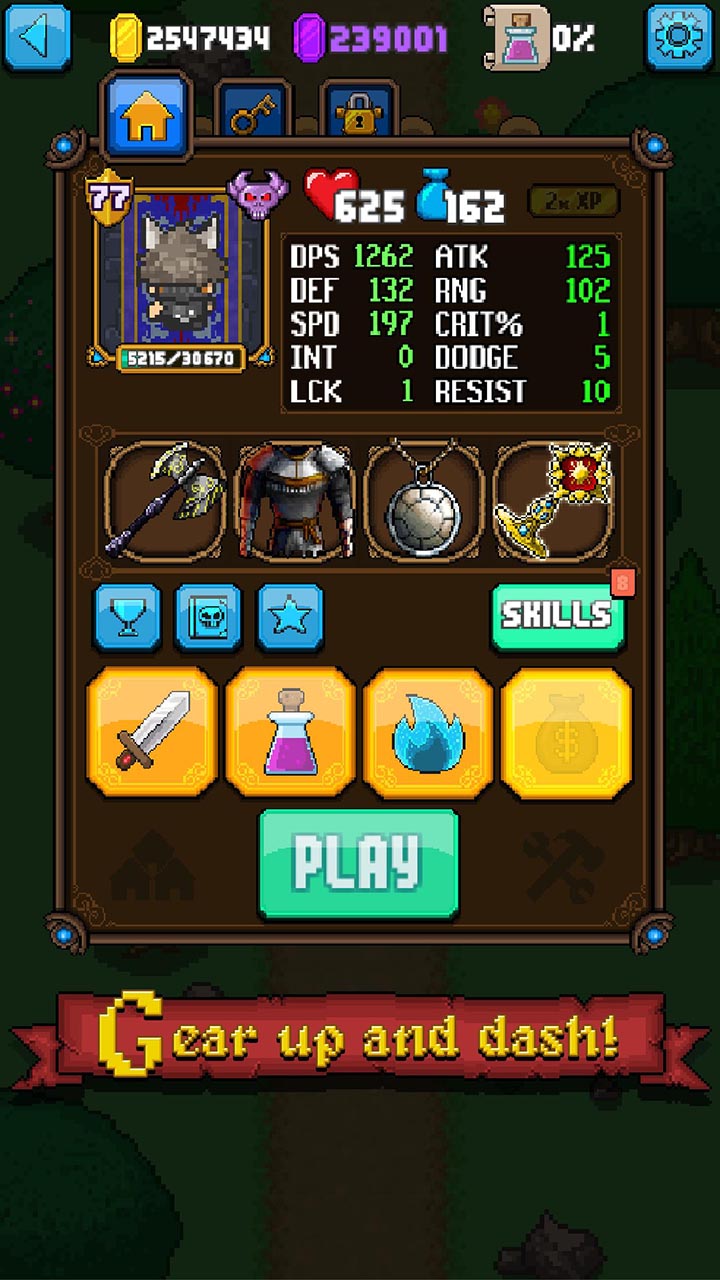 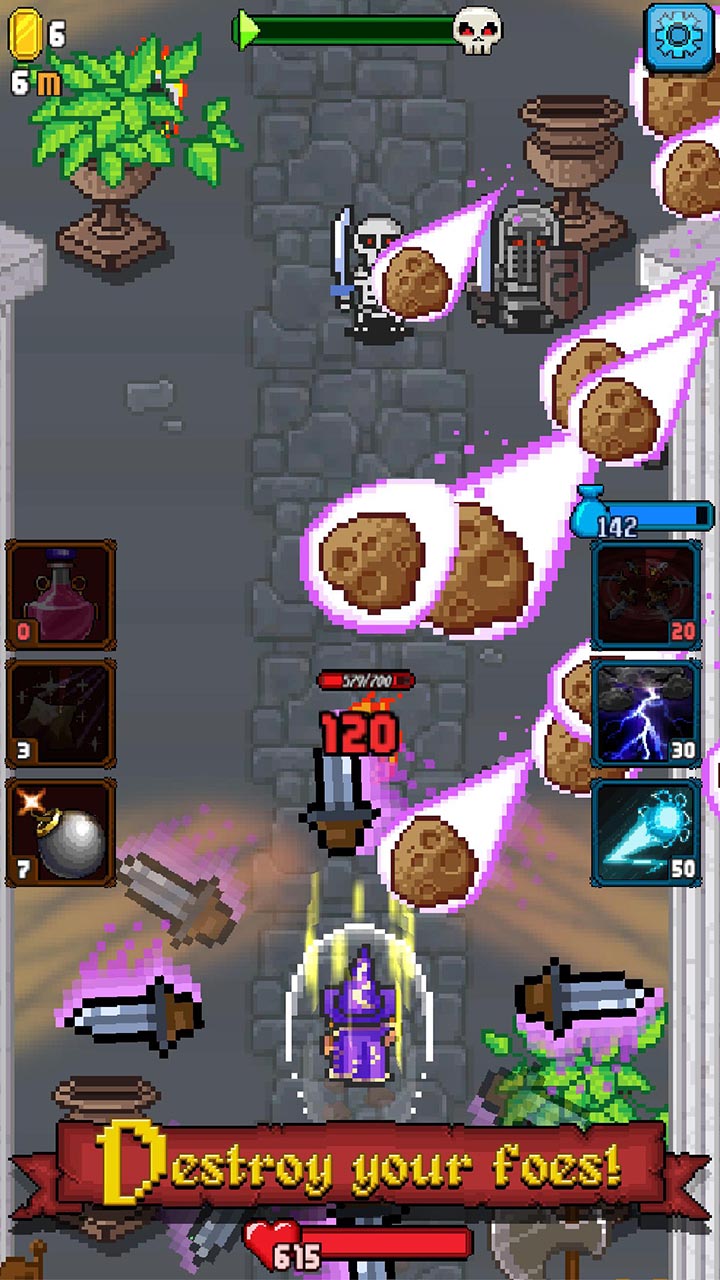 Start the game, you will be instructed how to fight the monster. It is very simple. Firstly, your character will have to attack your enemies before they attack you. To attack, you just need to tap the right side of the character. You also need to break the blows of the enemy to protect yourself. Let’s tap to the left site to block the blows. Especially, you can hold the right side to release a magical charge. The magical charge is strong than the normal attacks. They will help you to destroy many enemies. Let’s start to fight now.

In the real battles, the heroes or soldiers can go to the places that they want. But in Dash Quest, your character just runs on a fixed road. You won’t get distracted by move. Besides, when the character is moving on the road, you can pick up many useful things. They will help you to defeat the enemy and monster quickly. For example, bombs can destroy the enemy at a long distance. Or a Quest Scroll helps you to receive Daily Quests. Wanderer’s Trinket can unlock Wanderer’s Wealth bonus. If you play on consecutive days, you can increase the character’s stamina. In addition, the players will face a boss at the end of the battle. This boss is very strong and has many skills. You will need to much time to defeat it. But when you have destroyed it, you will receive many rewards. Let’s fight against the monsters to protect yourself and your kingdom.

Customize and upgrade your character

Like the different games, the level of difficulty will increase when you have overcome the level. Dash Quest is the same. If you have overcome the battle, you will have to face the stronger enemies in the next battle. The monster will have a lot of blood and skills. So you need to upgrade your character. There are up to 80 skills that the character will have to learn in Dash Guest. HP (Health Points) is one of the most important indicators in the character. The stronger your character is, the more difficult the monsters will defeat you. In addition, Combat Skill will increase damage when you attack the enemy. Sprints Skill increase the run speed of the character. Defender Skill will increase Defense. In the game, the players can’t learn all skills at the same time. You need to level up your character to unlock the new skills. For example, you will unlock Boss Hunter Skill and Charge Speed Skill when your character levels up 12. If the character is at level 75, you can learn Sneak Attack Skill. Learn a lot of skills to destroy all enemies.

In addition to skill, the publisher also has provided Gear Shop for the player. Here you can buy the new weapons such as Wooden Club, Iron Sword, Wooden Staff, Great Axe, Poison Dagger, Dragon Slayer, Pain Bringer, Redwood Wand, Inferno Scythe, and so on. You also can buy other powerful Gear. Those things will help you to create the new characters and make the game be more interesting. 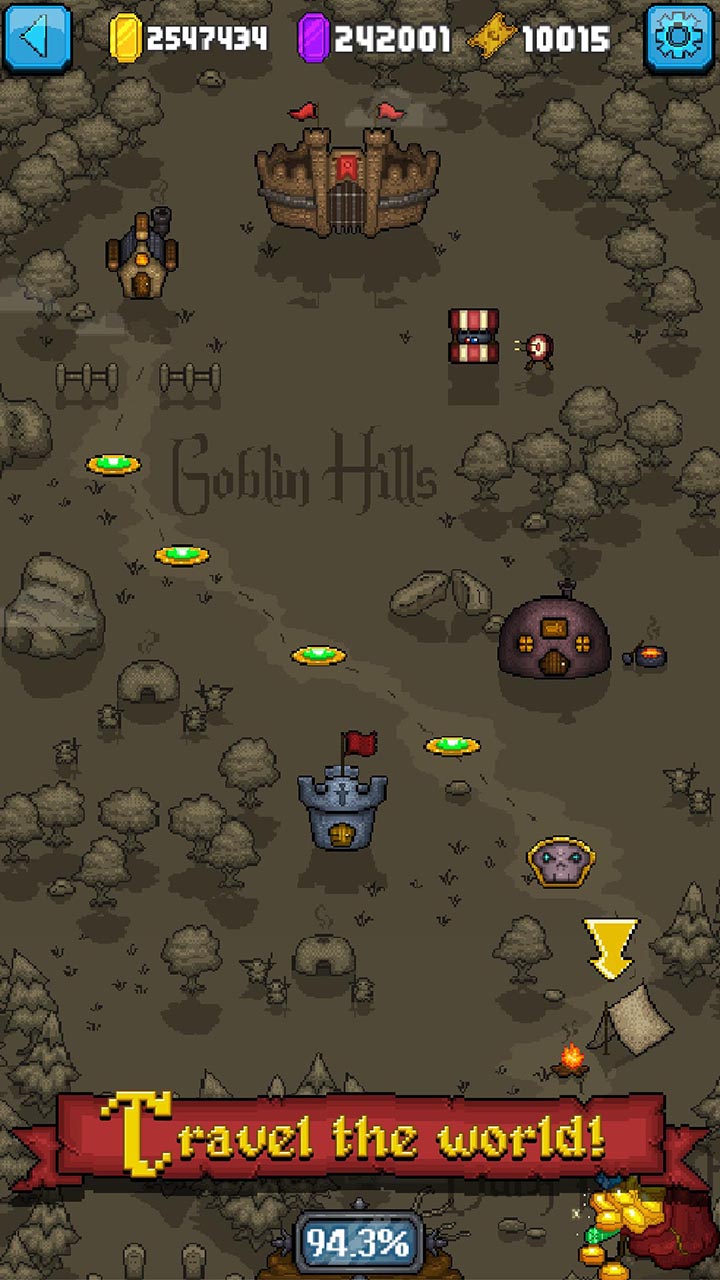 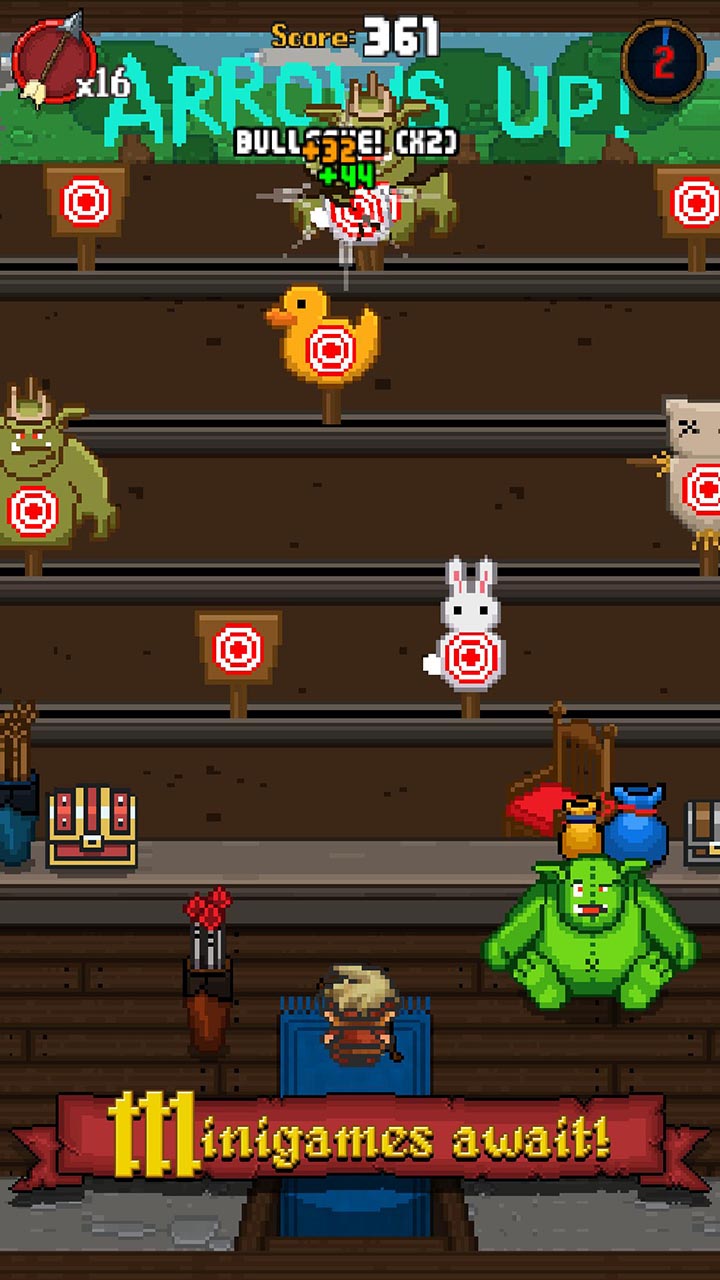 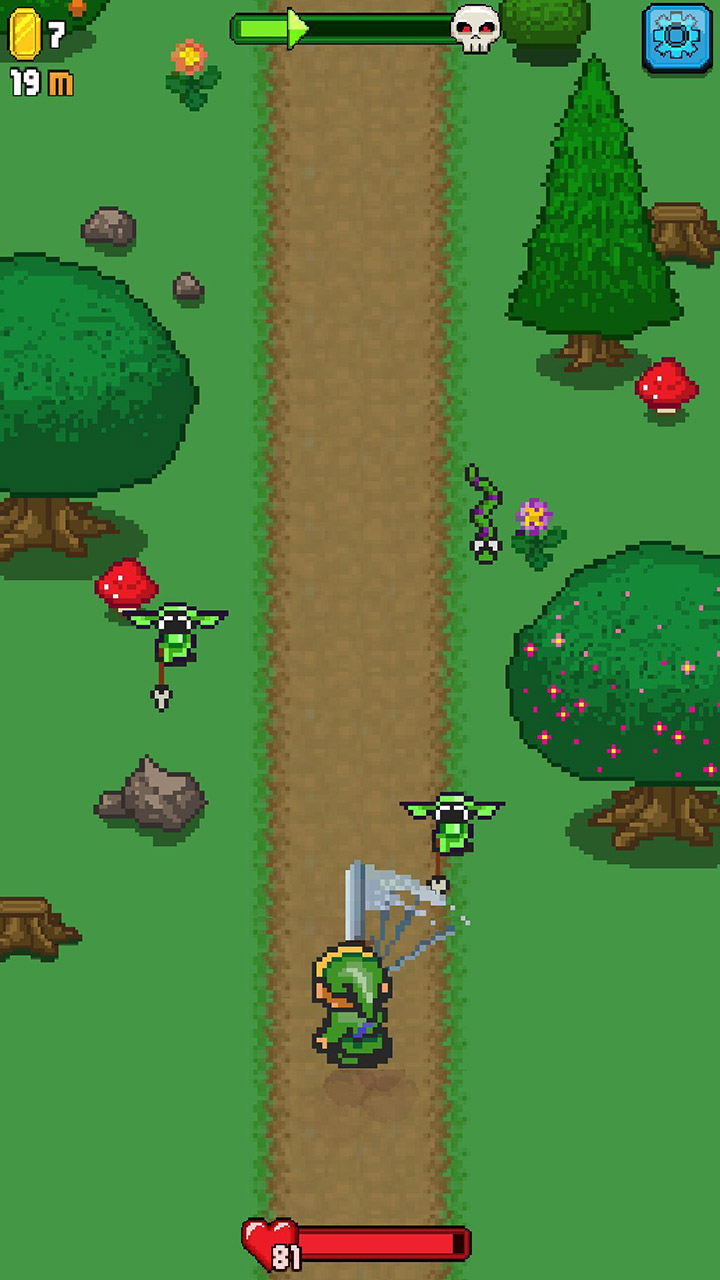 A combination of action and endless run with RPG elements

In Dash Quest, the player will have to fight the enemies and monsters to protect the kingdom. But at the same time, their character will run on the road while they fight. Besides, you will become the hero with many different skills. These things show that Dash Quest is the combination of many elements. Fantasy action and endless runner collide with the exciting RPG elements. In addition, an incredibly customizable upgrade system allows you to create the strong character with different equipment such as the weapon, clothes, ring, … Moreover, you can buy and upgrade Spells for the character. The Spells will help the character to destroy many monsters. You can also use pets to aid you in the battles. Fairy uses her magic to heal you and remove negative status ailments. There are many pets that are waiting for you to explore. Let’s take part in Dash Quest and explore the new and interesting things.