Rocket Sky is an interesting game that exploits a science topic that many people love. It is the launch of rockets from the ground to the sky. Make sure your rocket is not too hot. Otherwise, the game will be over.

In this game, launch your rocket as far away from the sky as possible. The game also forces you to purchase additional items for rocket innovation, reach higher goals, and discover new planets. Also, Rocket Sky has simple and engaging gameplay.

There are lots of different upgrade options, lots of planets, and rockets to unlock. The 2D graphics of the game are simple, but still enough for players to feel the excitement of rocket launchers coming from colorful images and vivid sound effects.

They developed Rocket Sky from Kwalee, a game developer known for many creative and dynamic, highly entertaining, online games. The game comes with the mission of launching rockets into space, which the most important thing is to time your missile to fly far away.

Rocket Sky has a fairly simple one-touch gameplay, in which it divides the missile into multiple layers of burning fuel to create a jet to bring the missile up. Rocket Sky is not touching and launching rockets, players also have to pay attention to when the fuel of the layers in the rocket is exhausted to separate that floor, reducing the weight for the missile to launch further.

With each successful launch, the player will receive a certain amount of gold, which will buy more floors or replace new rockets. Each time a missile’s floor burns out, align it so it hits the right moment to let it go, reducing weight and letting the missile fly higher.

The more you get to the top, the faster the fuel burn rate, which requires players to be extremely focused and ensure accurate clock time. If clicked too soon, the missile’s lower deck will leave when it has not been fully burned, causing waste and reducing the ability to fly.

And if the screen is clicked too late, the missile will explode and the launch fails. They also feature it in the space field, just a slight mistake also costs you dearly. However, this time, the rocket’s fuel-burning process will be individually simulated with a circle placed next to the player for easy observation.

How to Play Rocket Sky?

The space rocket launch is a simple game, which requires the quick hands and eyes of the player. In the game, you will be the one activating the explosive blocks in the spaceship’s hull to push its head as high as possible to score. In playing at a higher level, the more fun will open up for you to explore.

Rocket Sky comes with simple gameplay, just touch your hand to activate the explosives. But you need to be skillful at the right time, otherwise, the speed of the missile will not be strong enough to fly high. And if you press too slowly, the position will incorrectly explode, resulting in a failed launch. It will explode before reaching the destination.

The gameplay of Rocket Sky is like the games that require precision when pressing the keys like other dance games, but much simpler. The more you reach the top, the faster the explosive bar’s movement speed will be. It is why it has created both the attraction and fun of this game.

It updates Rocket Sky with new planets and spaceships. With 50 new technologies, you can upgrade and change the rocket as you like. The longer you fly, the more points players can score, set new records, and explore hundreds of different planets of the solar system in Rocket Sky.

After going through some practice, you will have a relative amount of money to shop for longer layers of ingredients to help the rocket fly higher. If it bore you with the image of the name in black and white, change your style. Just spend 500 gold to enter the random number, you will get a very special theme like orange, panda, flower, and bee.

Besides, when you are well versed in the practice of Rocket Sky, it will open the mode to bring people to the stars. Each time you send a friend, it will cost you a small amount of money to fill the floors of the rocket. When rockets successfully take them to the stars, you’ll get a very high payoff. But if the range is weak or exploded in the middle of the launch, you will lose nothing. 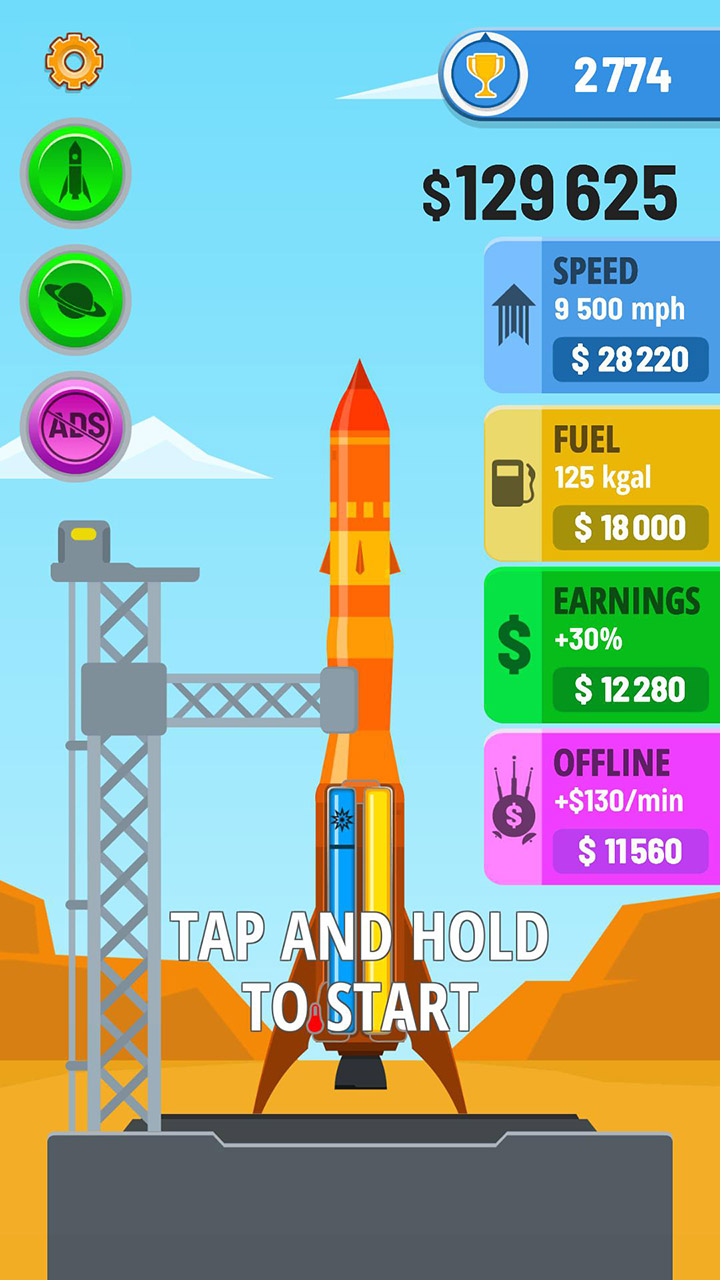 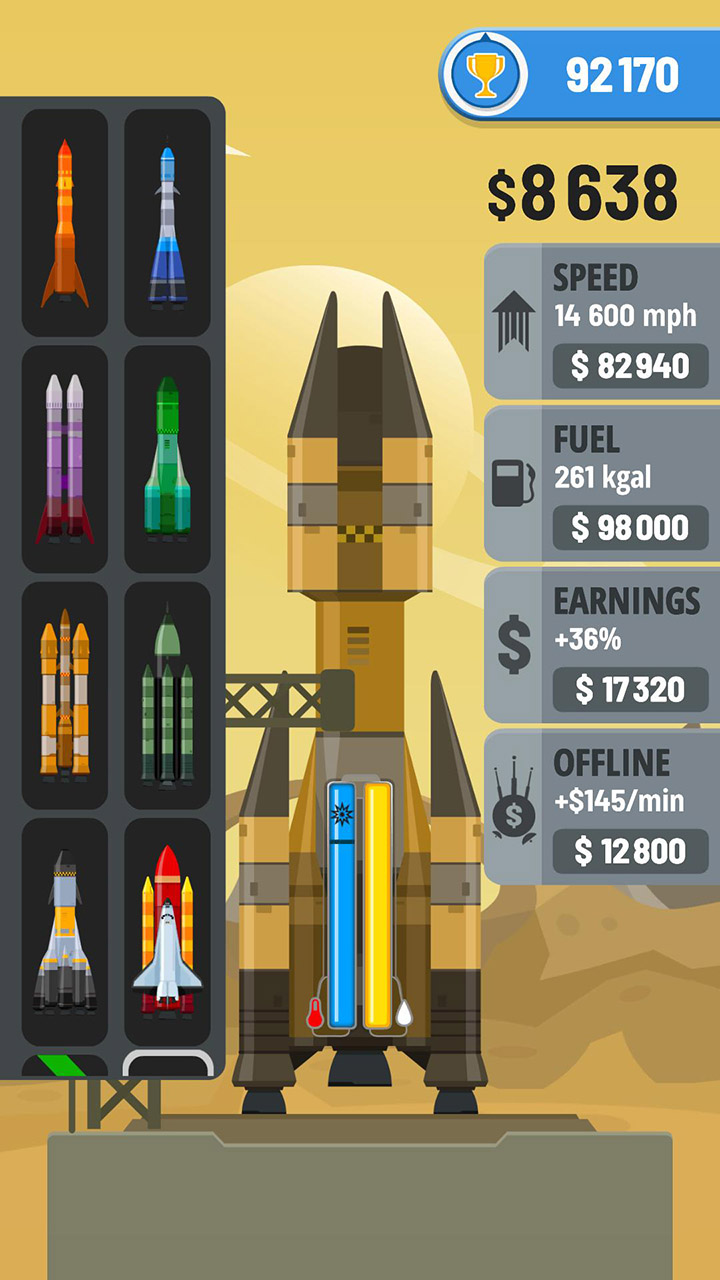 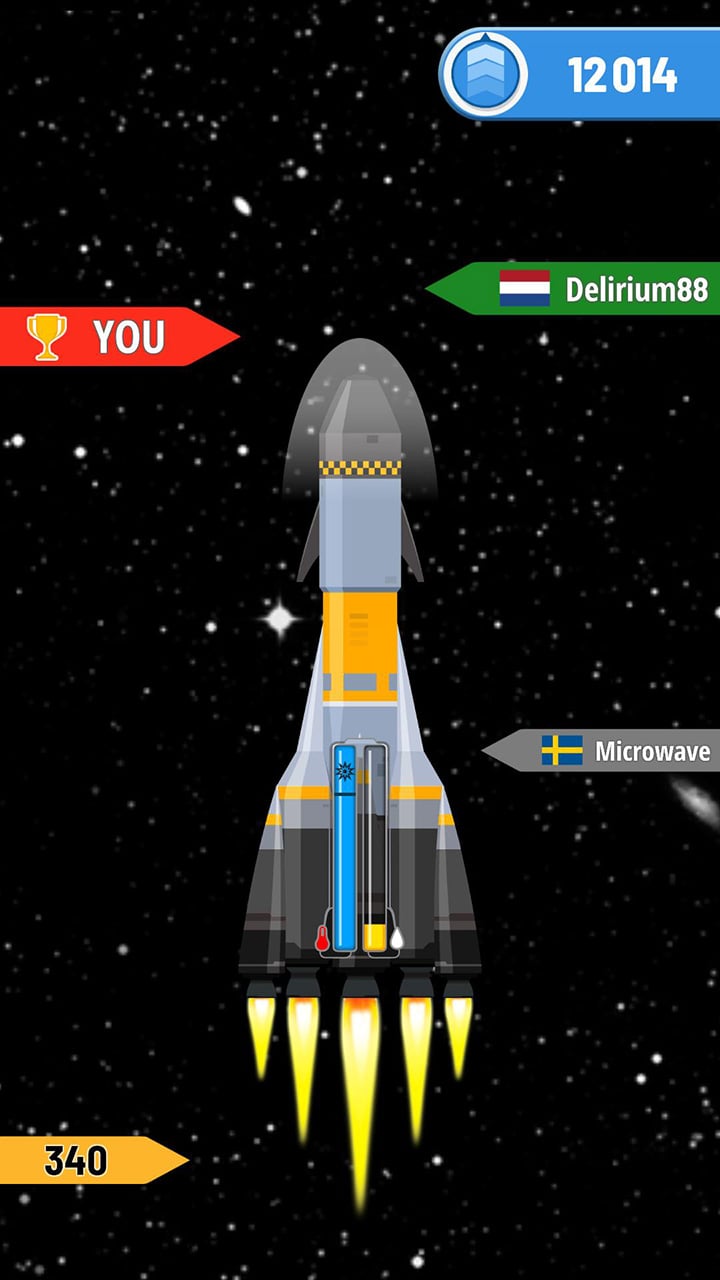 If you have already downloaded the Rocket Sky MOD APK summer game and are looking for tips and tricks to play the best in this fantastic game, then you are in the right place at the right time.

Rocket Sky is a new game from Kwalee for the iOS and Android platforms. Your goal is to launch your rocket to the sky, making use of some strategic tapping. You can upgrade your rocket for even more stadiums, unlock new rocket types, and even make it stay in orbit to be hit by meteorites along the way.

Your goal is to tap the smartphone screen as long as possible. The longer you tap, the higher your rocket or missile goes. If you plug too late, however, you will lose the rocket, it will explode and your race will be over. You can get a Good, Big, Fantastic, or Perfect classification depending on how late you can touch all the various parts of the rocket.

To get this perfect elusive first, you need to tap or tap on the rocket stage as soon as the green band appears. After that, look at the small light on either side of the current stadium to see how tall you are. If you hit it on top without popping it, you’re on top of the game. You have that perfect big push. The more you get the perfection of these movements, the higher your rocket will be.

Coins will allow you to upgrade your rocket. To earn more coins, you can watch videos that are viewed often. But they will not give you too many coins, at least until you make some updates. It will start giving you 10 coins each, up to 200 coins at level five, and so on. It will be 10% of the upgrade amount. Use these to purchase upgrades faster. In the levels themselves, you will earn one coin for every ten points, so coins can often be acquired quickly.

You can also unlock new rockets and all of them will continue to maintain the upgrade level that you are at the moment. The appearance of the whole rocket will change, not just the tip of the rocket. It will also change the citations. You might even get an excellent result if you do well enough.

As you keep updating and capping perfectly, keep checking out the top scores in Game Center and Google Play. You will see which are the best players from around the world, and you will compare your score with their scores.

The major goal when playing Rocket Sky is to manage workstations on Earth and other planets with the moons. You can buy an entire group of workers and set up a series of commands so they build rockets that can explore other planets. Now. Let’s go a little deeper into the gameplay mechanics of Rocket Sky and what we should know as a beginner.

You will start the game with an empty workstation and your first goal is to buy enough labor to help you build your rocket. The lowest level is to take the material and transport it to the elevator. The elevator guy is also the most important worker, supplying supplies for all different levels in order.

It requires the first level and the second level to craft the rocket before launching it to the moon. You can buy more levels to build a bigger rocket and get a reward for making a successful launch. Workers like machines take a while to get their jobs done. We will see jobs through the clock at all levels.

After building the missile system, now, you explore all other planets, including the moon. Each planet has its interface, and you have to meet certain requirements if you want to explore that planet. These requirements usually involve sending a certain amount of rockets to that planet to unlock the possibilities of building a space station on it.

Upgrade and Craft Your Rocket

You need to craft other parts of the rocket. We will purchase these with in-game currency. You can check the amount of money needed to buy by looking at the charging meter on the missile’s components.

In the game, you also need to upgrade. Mastering and keeping the balance of upgrades are of the utmost importance. Balance your upgrades for all workstations including elevators, deliverers, and platforms.

It will help you increase your money collection efficiency with no delay. The first step is to upgrade all platforms to the same level if possible. Then check both the Elevator and Shipper.

If you are bored and do not want to play complicated multi-functional online RPG games, then Rocket Star is the perfect alternative for you. The name of the game also shows you that the game does not require players to play every day for hours to check their game progress.

Instead, Rocket Star is a game where you get to know the machines and explore the world more. So, how to play Rocket Star? What secrets do we need to play well? With Rocket Star, if you are a beginner, note the following playing tips and tricks:

It will reward you with this space crates every day or when crafting rockets. To receive the leader, you click on the plus sign at the bottom of the screen and select your favorite person. After you assign the leader, his special abilities will help you produce faster.

Rocket Sky is another crazy game by Kwalee, which is the manufacturer of the game on fidget spinners. To make you understand, this time, its setting moved to space and makes us impersonate a space station that has to launch its rocket as far as possible in the aforementioned space. To do this, we will have to touch the rocket at the exact moment to generate a thrust that will be stronger based on how close we get to the designated point.

The game also features both a rocket enhancement and rocket customization system. Both happen through coins that are earned by playing and also quickly if you think with a few games (which last about 15-20 seconds) you get enough money to do what you want. The game is available for both iOS and Android. And like every game of this genre, it already has millions of downloads.