Skiddy Car is a game for those who are lazy with minimalistic operations, but attractive and equally difficult. If you are an ardent fan of racing games like Asphalt, Need4Speed, and Real Racing but suddenly you feel lazy and do not want too much finger activity, Skiddy Car is not a terrible choice.

Or are you looking for something light and fast? Then the Skiddy Car game that we will introduce in the article below will be a gift that developer Kwalee, Ltd gives to you.

Skiddy Car is an interesting mobile game for exciting small racing parkour challenges. It is like the previous popular dancing lines on the entire network. But the difference is that it replaces our small squares with a car.

It is no longer a smooth road but a winding road with up and down slopes. Besides keeping the lane, we also need to control the car to eat gold coins along the road. The game is very challenging, but the playability is super high. Come and try it!

They design the game with a pretty eye-catching graphical interface and colorful car models. Perhaps it will be very suitable for you to regain your spirit after a day of stressful study and work. Fun, relaxing, easy to play but also challenging are our comments about this game.

The player’s task is very simple, control your racing car to the finish line safely and try to collect lots of gold coins during the move. This gold will help you upgrade to more advanced models. The vehicle in the game is always in a straightforward state.

There is no way to stop or control its speed. The only way to control, and also the only job you have to do, is to touch the screen to change the direction of movement for the car. Touch one time, the car will turn right. Touching again, the car moves to the left. Just like that, you have to control the racing car well so as not to slip off the track and fall into the cliff.

How to Play Skiddy Car?

Among many racing games today, the name Skiddy Car is practically not too strange to players in the app store. Skiddy Car is free to download and play. What makes this product so appealing to gamers is its gameplay that emphasizes reflexes and improvisation in difficult situations.

Experience the racing game Skiddy Car tough with challenging racing conditions. It is also an opportunity for you to show your skillful reflexes. The game offers simple controls, but difficult. Not a puzzle product, but controlling the Skiddy Car is difficult.

By touching the screen you have to control and direct the vehicle’s path along the roads on the uneven road. Not only the bumpy, but the zigzag curve of the track is easy to make the player fly out.

Not to mention the sudden holes appearing in the middle of the road, causing the car to fall right into the hole. To earn coins on the track, be dexterous, and have good reflexes when driving the cars.

The game’s images come along with eye-catching colors. The visual aspect of images and colors in Skiddy Car will make many players enjoy the vibrancy. It also shows the roads in different colors and designs. And the colors of the cars also create an exciting excitement.

There are many levels of play. Passing one level after another in Skiddy Car, you will see the journey to conquer the last track seems not over. Each strange stage has certain challenges that hinder you and are difficult to overcome. The higher the level, the greater the difficulty, and the player needs to have better reflexes and handling. 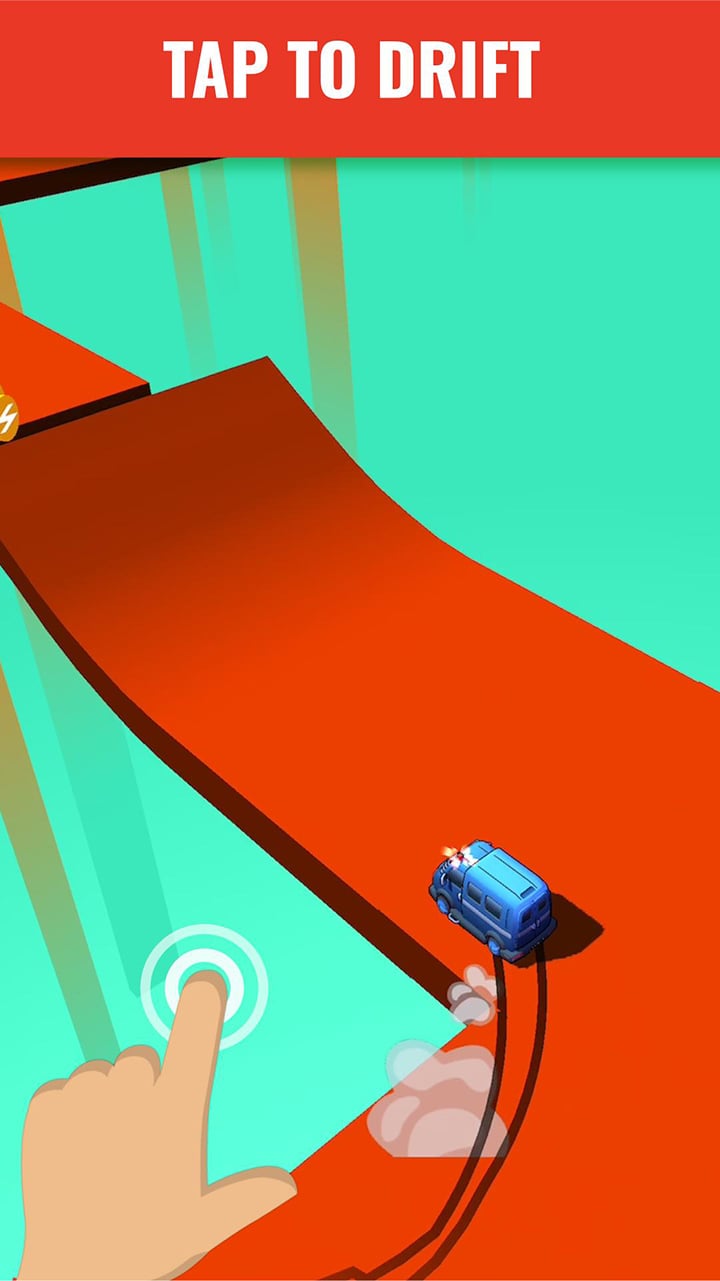 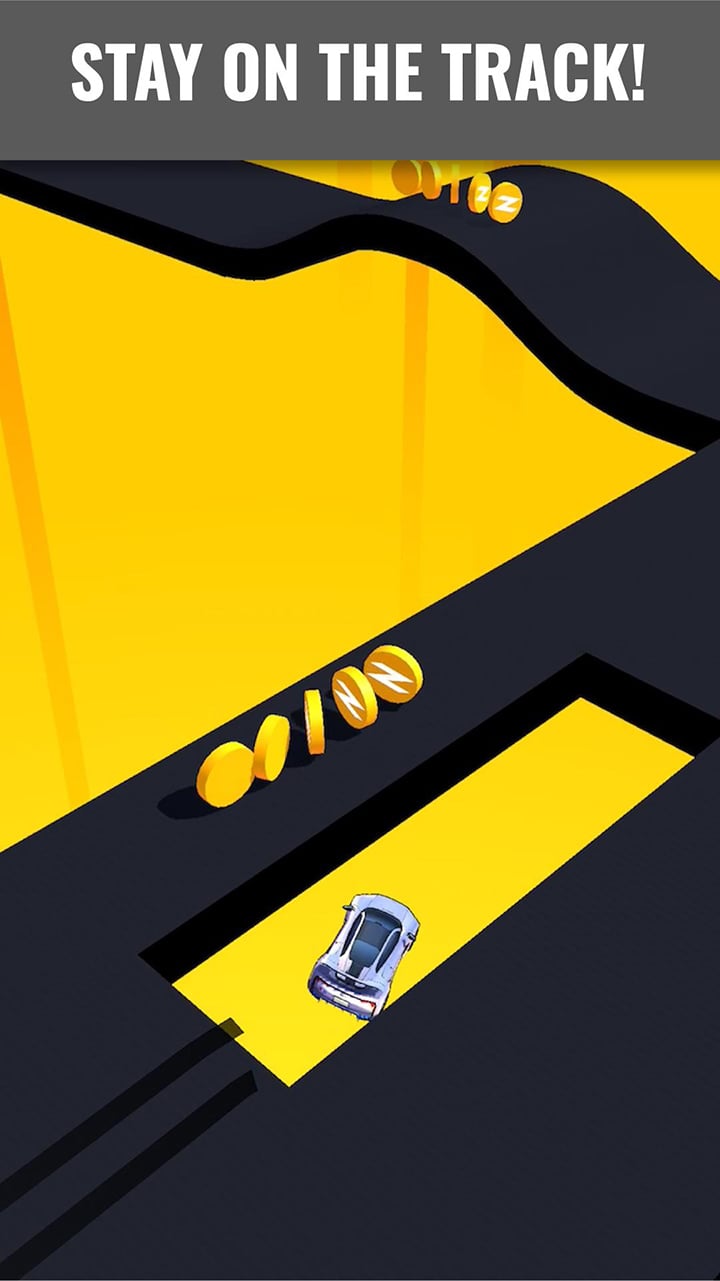 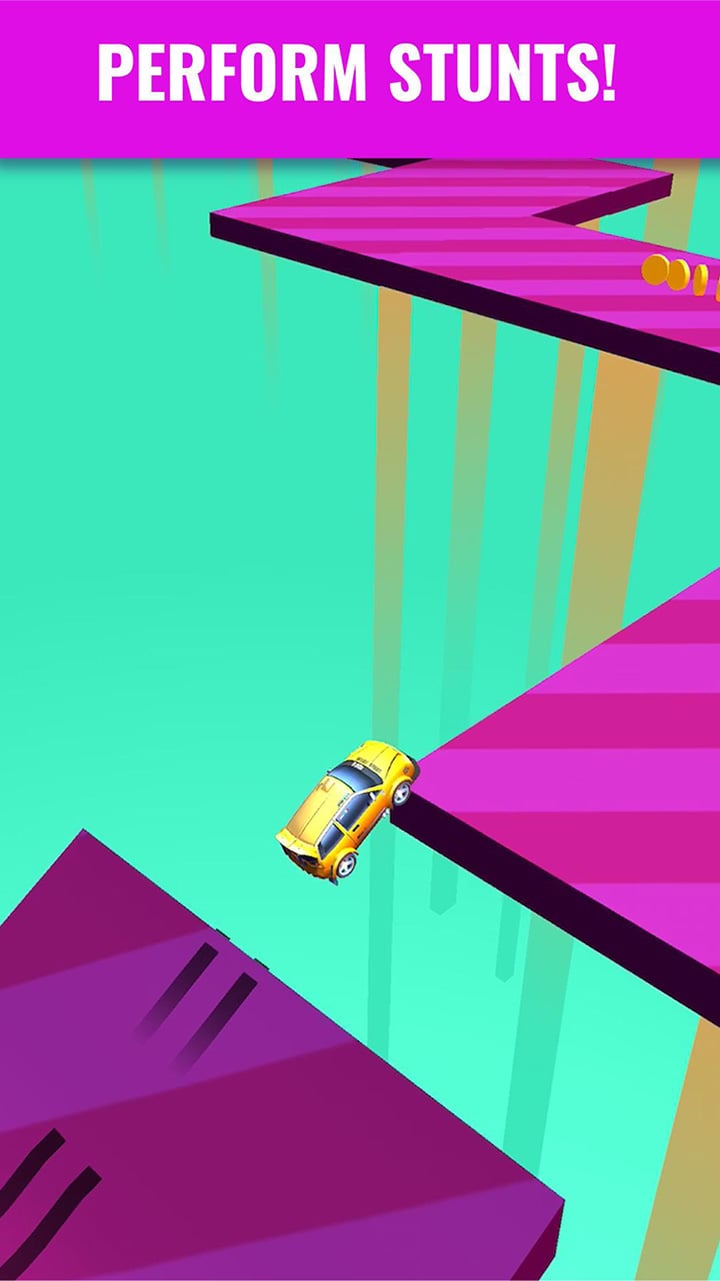 As shared above, we can consider this a game for lazy people. Because all the only work you need to do during the car’s journey is to touch the screen. Just like that until the car finishes and passes the table. But if so, it would not be interesting when we recommend this mobile game to you.

The hard point in the game is that besides running at a fairly fast speed. Our racing car also has to drift because of the intersecting bends. Not to mention that they subject the car to the inertia force, which probably game developers love physics.

It causes the car to slide one more segment each time it turns. The player must time to change direction, avoid the right turn, but still fall off the cliff and end the game. 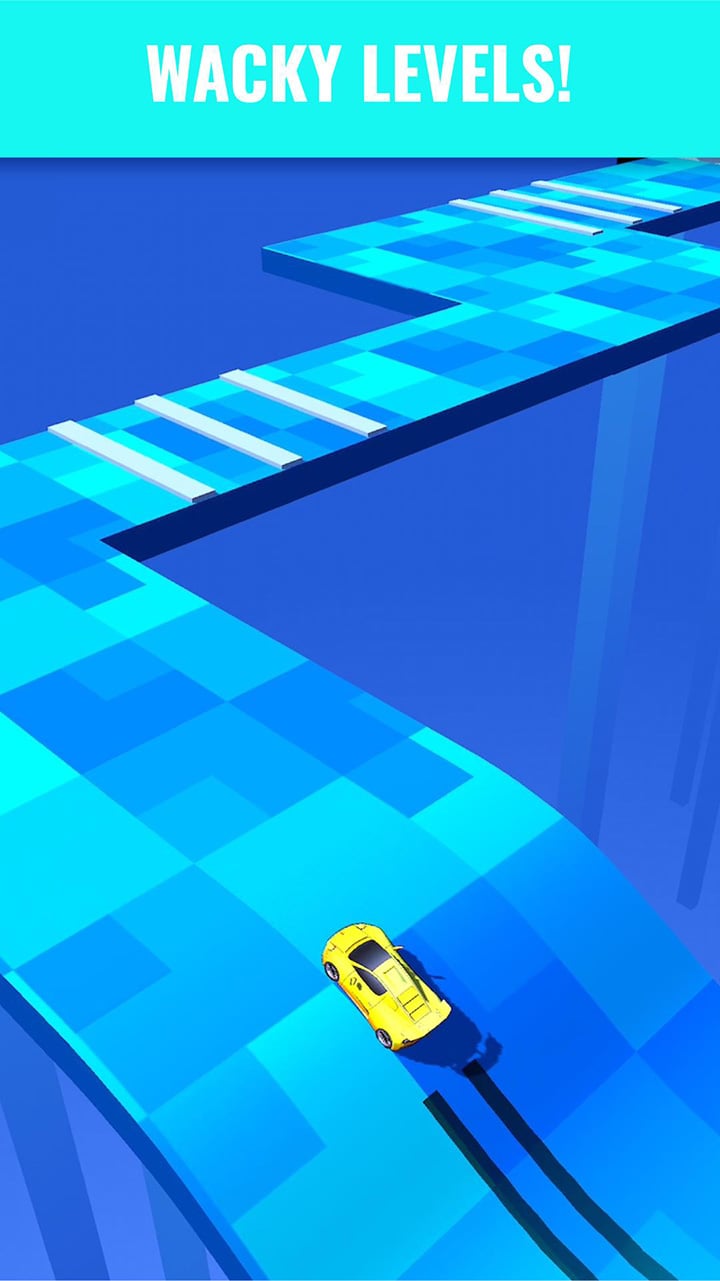 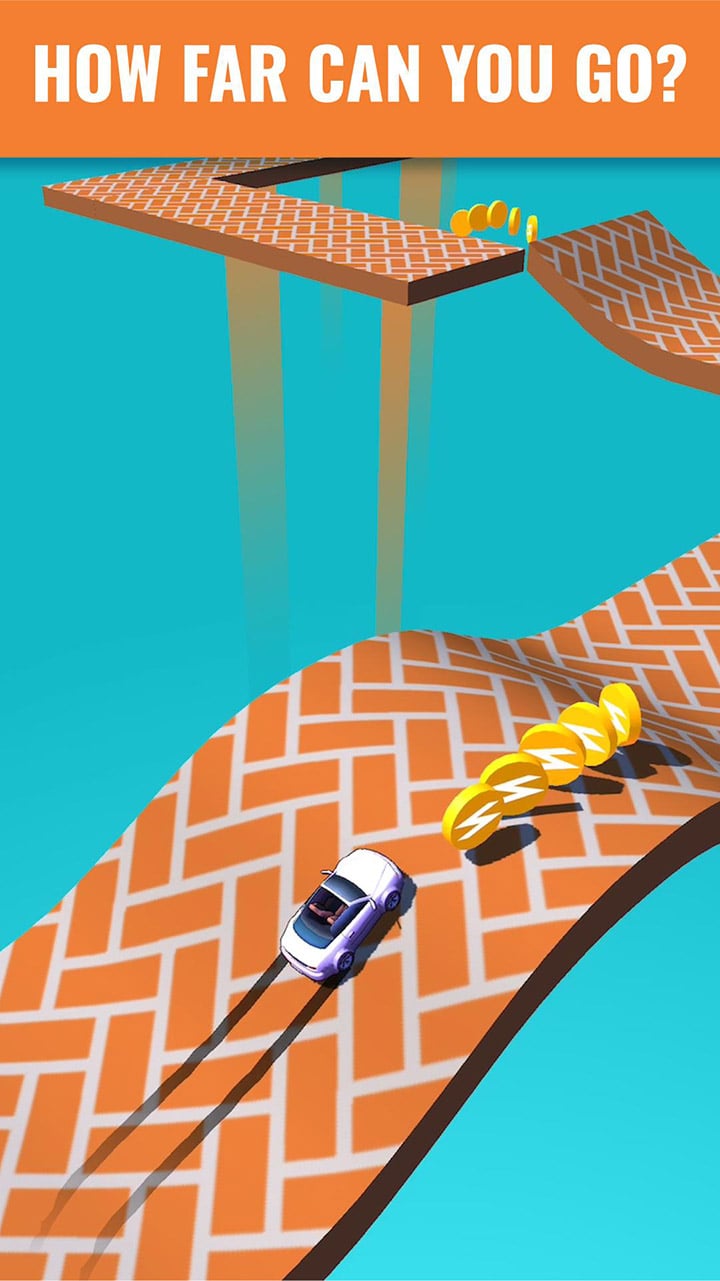 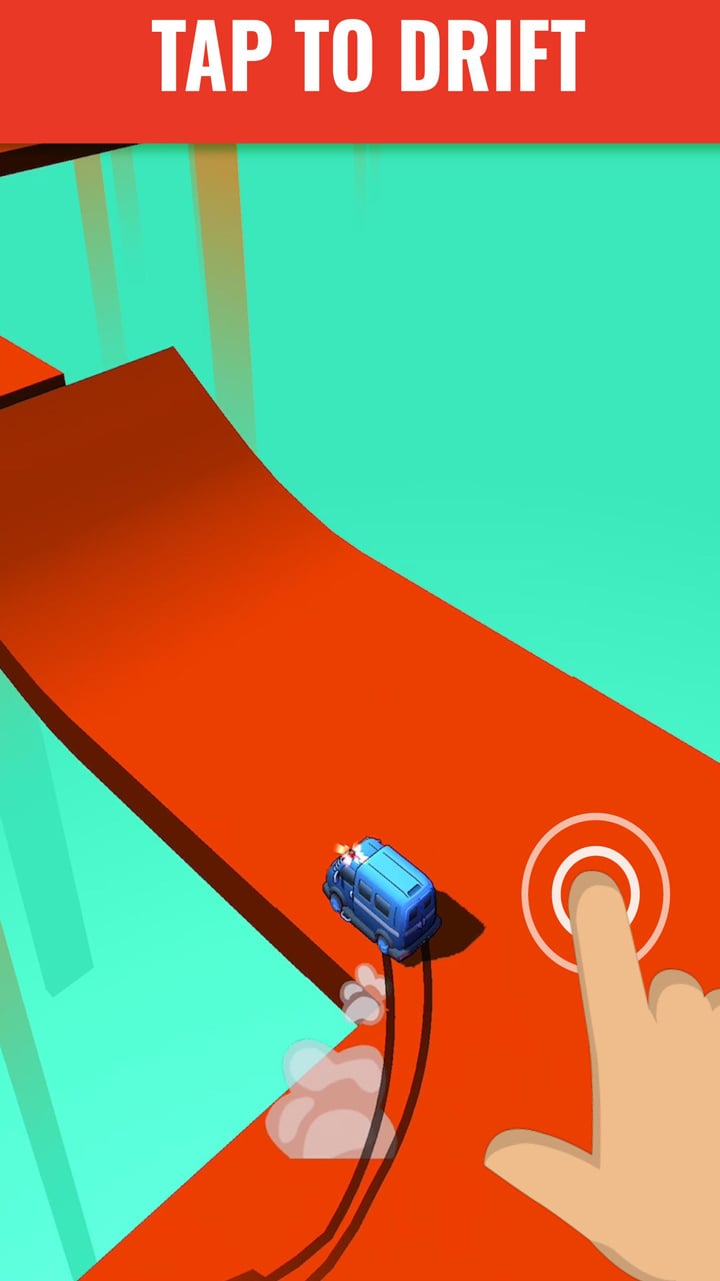 Because it is a game with high entertainment elements, the images, and colors in the game are very characteristic of the animation genre. You can easily change the color of the track with gold earned, watch a promotional video, or a cash deposit. There are over 20 different color choices.

The sound of the game is also vivid, showing the roar of the car engine as in a fierce race. Experience with this game Skiddy Car will help you relieve stress effectively.

They release the game for free on both Android and iOS platforms. However, the only thing that makes us unhappy is that the game contains too many ads. At the end of each race, whether you finish the race, it still gives you a pointless promotional video by the developer. However, Skiddy Car deserves an entertaining offline game, such as less than 100MB capacity, vivid sound, eye-catching colors, and easy to play.

Skiddy Car is a simple and colorful drift racing game provided by Kwalee Ltd. The minimalist screen and minimalist operation allow players to experience the challenging fun while being easy to use.

The gameplay of Skiddy Car is very simple. The car will automatically move forward after it starts. Players can click to control the steering of the car. They must be careful of various interruptions, traps, turns, and other problems that appear on the track. And it does not dilute the fun of the game. They do not weaken the excitement in racing at all in Skiddy Car.

Although the game screen of Skiddy Car is simple, it still provides players with a variety of detailed models as rewards. A variety of wonderful and interesting tracks, various game skins with different styles, and many game levels. Is waiting for your excavation.

For the hard-working players of racing games, the novices who love drifting but have no choice, and you who are not resistant to games with simple graphics, don’t hesitate, Skiddy Car is your first choice.

Smashy Road: Wanted is a mobile game bearing the mark of two monuments GTA and Need For Speed: Most Wanted, where players are chased to suffocate. Endless Run has been storming for a long time with a series of names such as Temper Run, Crossy Road, or Subway Surfers.

However, the linear gameplay with indispensable boredom after upgrading these famous games is a wake-up call for every game publisher that still intends to pursue this genre. In that context, Smashy Road: Wanted emerging as a gameplay breakthrough that made the gaming community crazy for its unbelievable excitement.

Playing the role of a monster that is wanted fiercely fleeing from pursuing a series of police, SWAT, special forces or even the army will also take part. Players must be able to wriggle through the streets of the city, take advantage of buildings, obstacles, and other vehicles in circulation to block the path of pursuing forces.

Smashy Road: Wanted has a very simple control mechanism, touch left to turn left and touch right to turn right. The player need not do any additional action because the vehicle will automatically speed up and reverse gear when blocked. Although the control is so simple, it is difficult to master your car as you like.

Starting with a one-star level, it will promote players to a wanted level gradually over time running away. The more stars you gain, the more forces will chase the more from civil defense, such as slow and weak patrol police cars to SWAT armored vehicles ready to crash into you. At any moment or its climax, an unbroken line of tanks kept firing on the back.

Each car will have unique properties, not just for coloring like other games. For example, the F1 racing car will always be launched at the altar speed or the crawler truck is slow but can knock any police car without being disregarded. This is the difference and the addictive element that is unique, that has never been seen in any game before.

Smashy Road: Wanted is an addictive mobile game and has a strange urge to compete. When we recommended this game to my friends, they broke my record for three days and we continued to challenge them after spending an entire afternoon just plowing and hoeing.

Smashy Road: Wanted is very focused on creating its racing cars, with over 90 different racing cars, with very detailed, meticulously built color characteristics and appearance. It will not be difficult for players to choose a car that makes themselves fall in love.

Besides context, the terrain is also a strong point of the game. With a variety of mountainous terrain, the buildings are beautifully shaped, bringing interesting feelings through each game screen.

As a racing game, the sound is indispensable. The sound of the car exploding, the howl of a police car, the rotor blades, or the horrifying car crashes. The bustling soundtracks catch the ear. All have fused to create an atmosphere, a chase giving players a feeling of excitement and excitement.

For many people, the one-touch drift gameplay of Skiddy Car MOD APK differs from other games. It is not about touching the screen to let the car run, release the car, or stop the car like in Pick Me Up. Or controlled via virtual buttons on the screen like Hill Climb Racing. However, Skiddy Car is easy to learn, filled with new challenges.

Your major goal in Skiddy Car is to keep yourself from falling off the road and getting to your destination. Along the way, you can collect scattered gold coins, which will unlock new cars, customize the track.