Catapult King brings moments of fun, and extremely relaxing action. You will control a catapult, and use the stones to destroy the fort / castle. You even have to face a huge fire dragon. The game offers great destruction experiences, and you must rescue the princess by defeating many enemies in this exciting 3D fantasy adventure.

Catapult King is not talking about complicated and novel things. You are a warrior, and your mission is to rescue the princess like the fairy tale. You must defeat fortified fortresses, defeat evil soldiers, and powerful dragons. You use all your awesome skills, powerful arsenal (like cannon and health) to win maximum. The mission is simple, but you don’t easily defeat powerful dragons to save the princess. The game offers more than 100 fun and challenging levels, with many attractive rewards. Besides, you upgrade the shooting machine and skills to create powerful magic bullets. For example, you can create a perfectly precise line of sight, use Shock Earth to blast villains, or call off a fierce Strike devastation. Lots of great skills for you to use, and enjoy interesting effects. 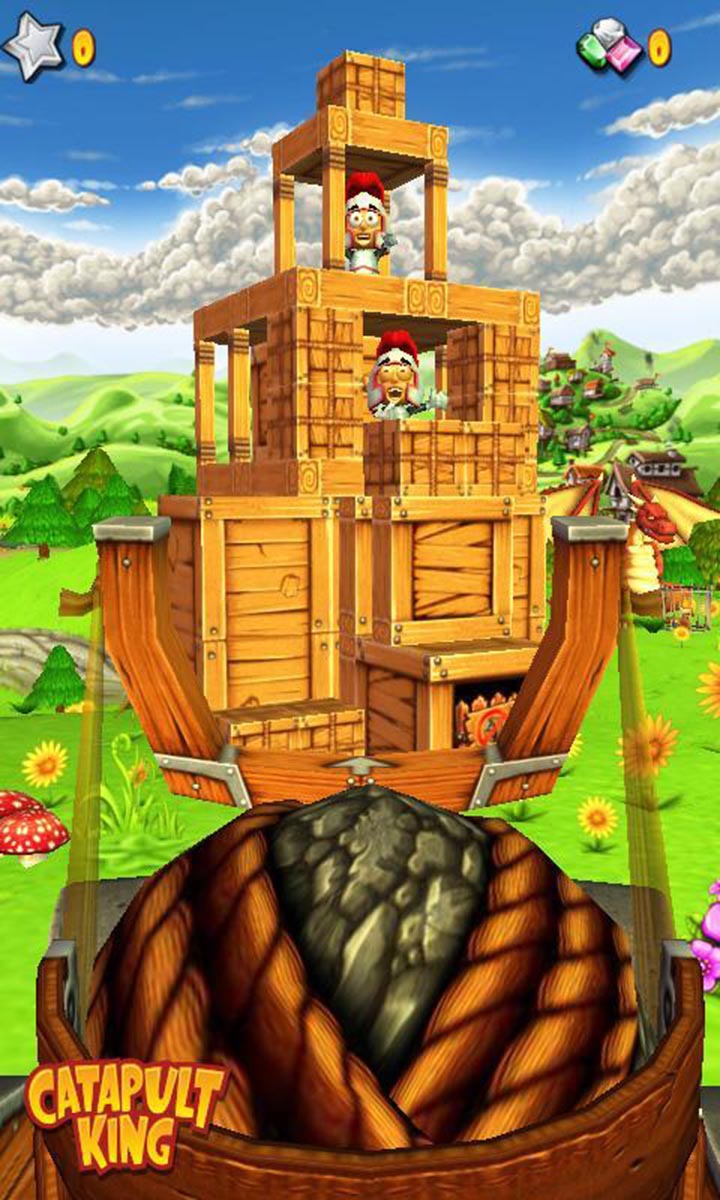 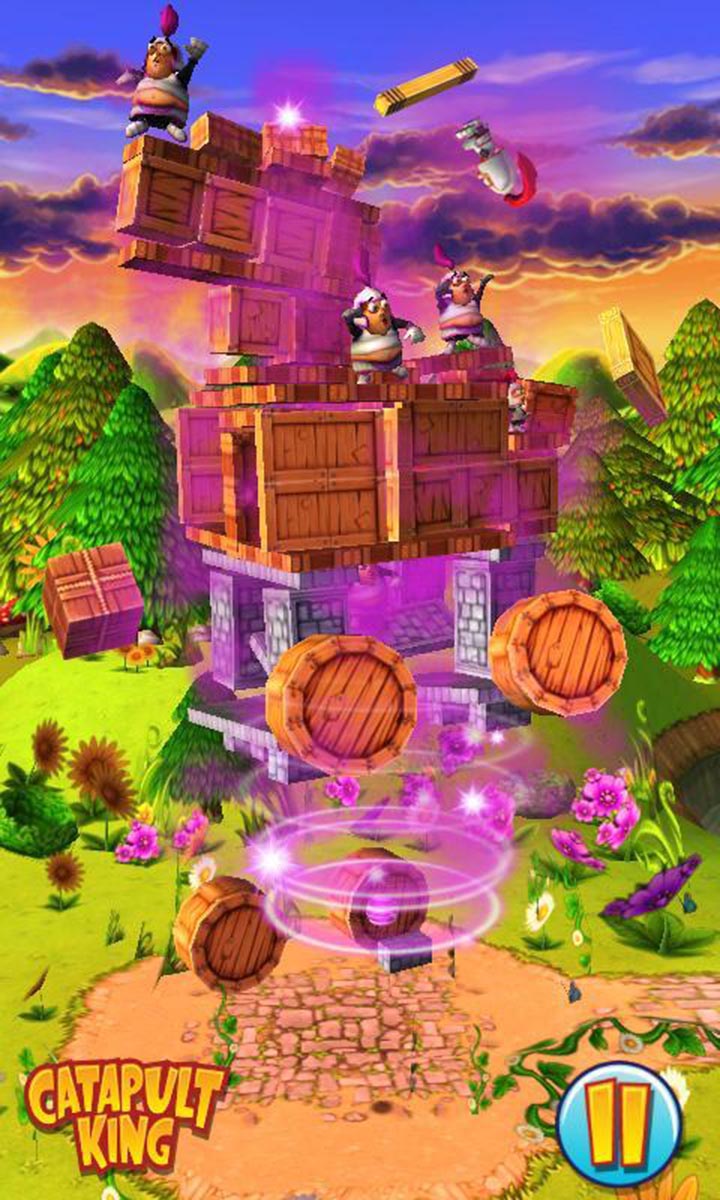 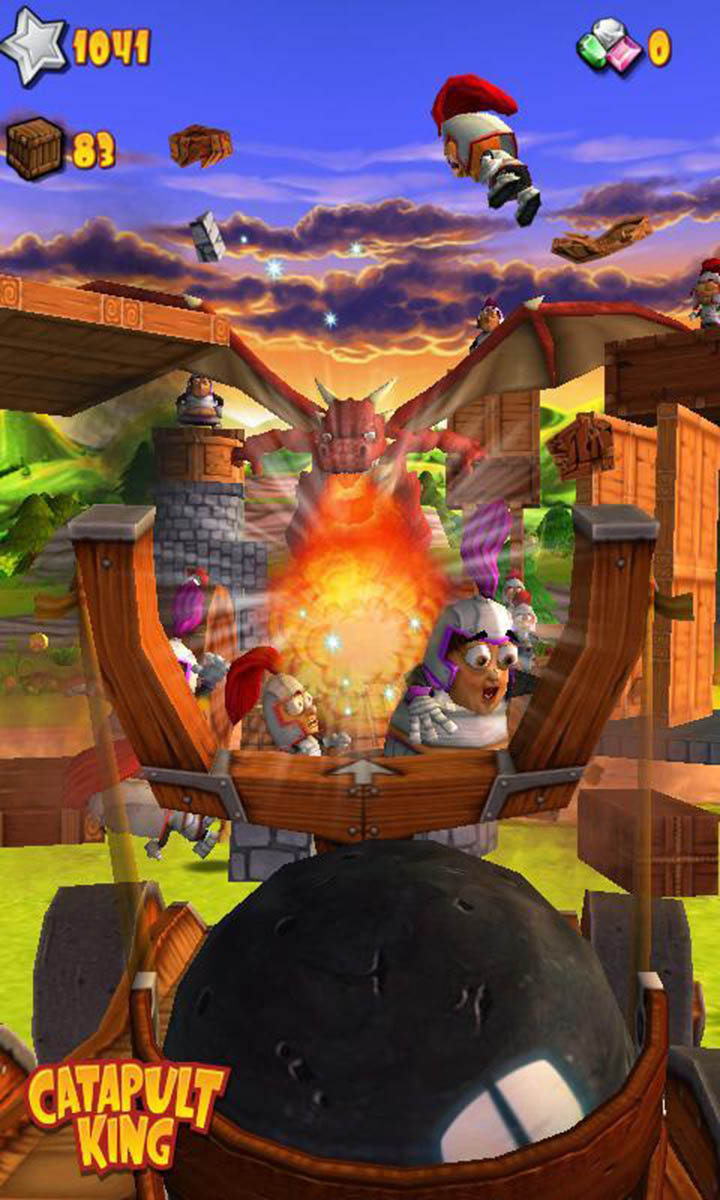 FEEL THE GREAT JOURNEY TO DESTRUCTION

Catapult King showed great destruction. All thanks to the physics effects, the amazing 3D graphics engine. The game offers great classical experiences, and you will have enjoyable entertainment. Your mission is to destroy the towers, defeat the dragon fire, and rescue the princess from countless difficulties. Of course, the gameplay is simple, but you need to do a lot to beat other tough opponents. The game offers great tactical experiences, and you need concentration to have better rock shoots. You think about the gameplay, effectively using your arsenal like a real king. Your reward is an enemy defeat, and rescue the beautiful princess. Besides, the game also introduces many great magic, and you need to use reasonable power to quickly kill enemies. The game has great graphics mechanics and many interesting upgrades. In addition, the sound system is extremely interesting, and you will have many wonderful experiences through the journey to rescue the princess.

Catapult King doesn’t say too much about a complicated plot, and all you need to care about is the destruction of medieval castles, walls and buildings. You throw giant rocks at the castle from The Catapult, and it all happens from the first perspective. The game offers the same experience as classic Angry Birds, but with a few unique differences. The game uses a one-dimensional reality perspective, so you can stare at the scene in three dimensions. Of course, the projectile will also fly from the first perspective, and all the breakdown becomes as real as possible. The game has over sixty levels, and all of them are very challenging. You need to do a lot of things to break all the complete structures. After playing and completing time, you collect bonuses to improve the catapult, or buy powerful magic to create spectacular shots. The game is very interesting, and the gameplay is simple and addictive, so you will easily have many great entertainment moments. 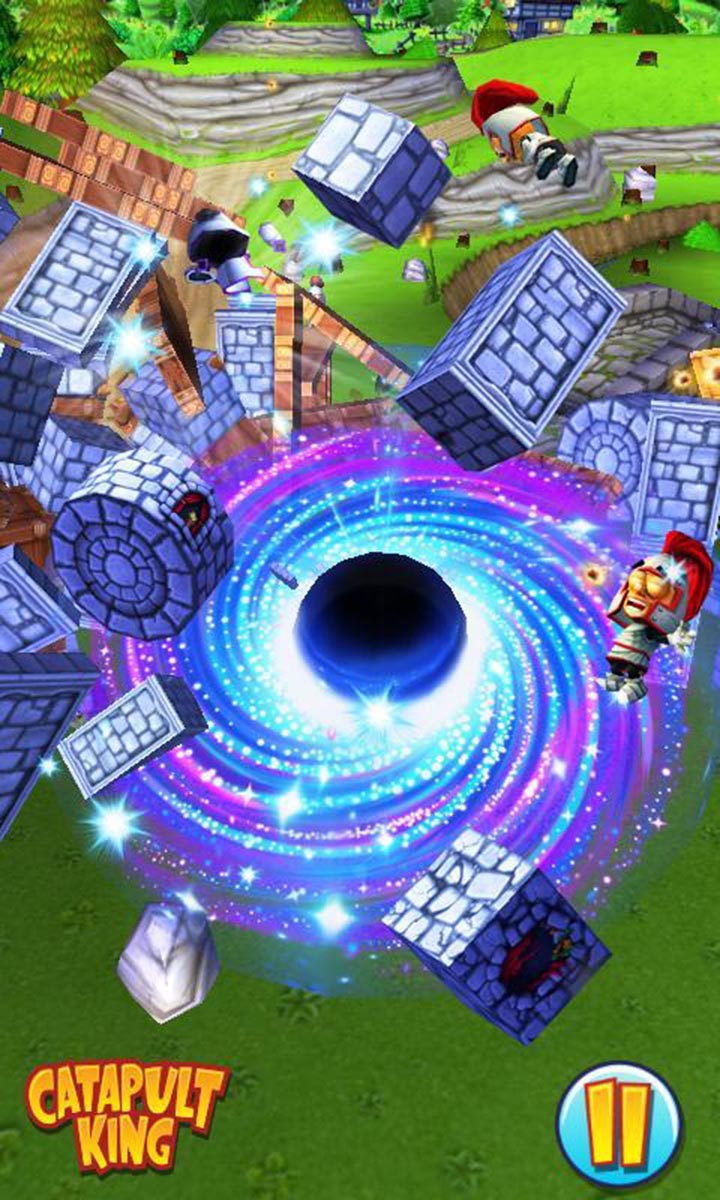 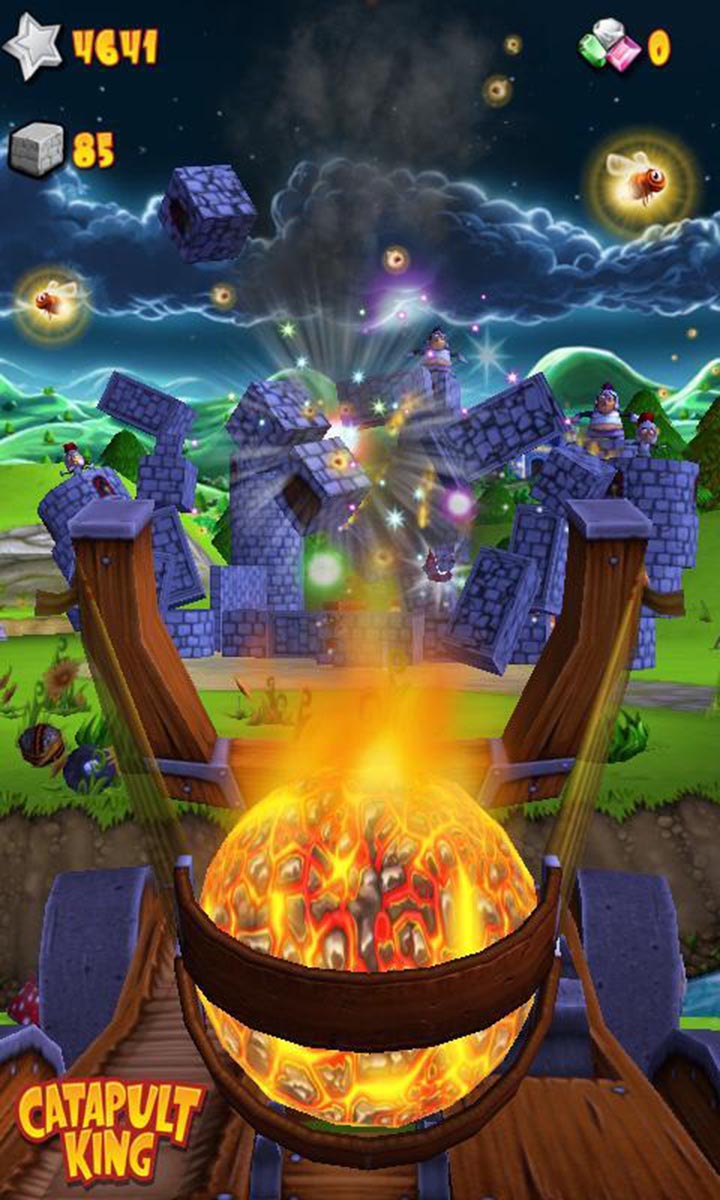 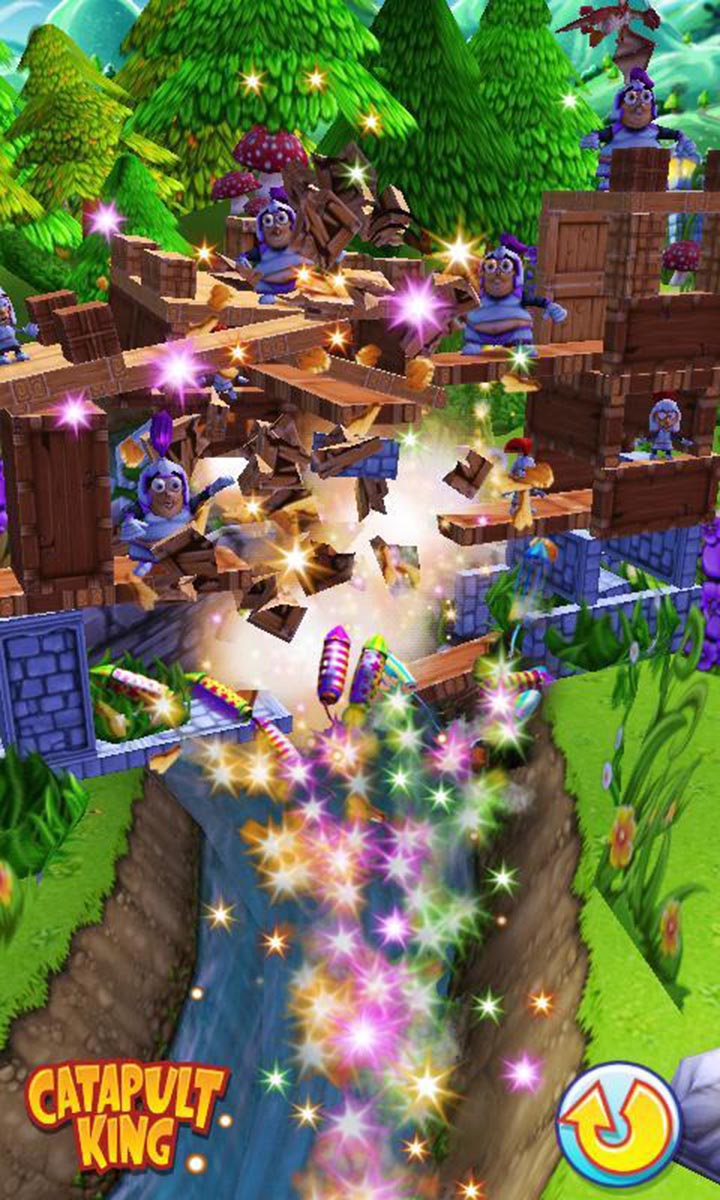 Catapult King tells about a familiar story, that is the rescue of the princess from kidnappers, and giant dragons. But the game offers extremely interesting rescue experiences. You play as the Nasty knight, and will use the powerful stone gun to destroy the dragon fortress. You have to overcome more than 60 challenging levels, defeat multiple enemies to rescue the princess, and teach the bad guys a lesson. The more levels you pass, the more interesting magic you will learn, and the more precise and destructive use of your gun. Catapult King tells the full story of the fortress destruction, and the difficult battles with a powerful fire-breathing dragon. Try to rescue the princess, and defeat all tough enemies in this super 3D fantasy adventure. Like the old story, the princesses spend most of their time kidnapped by dragons, and the princesses in this game are the same. You have to do many things to rescue them all through your arsenal, and your bounty. Get ready to fight the ferocious dragon, and keep the princess in captivity.

Alternatively, you can try “The Catapult” if you love a similar style game. The game is about missions to help the stickman protect the castle from enemies. You also use the catapult to destroy the opponent, break the walls, the siege tower. “The Catapult” has a simple intuitive control mechanism, and you use coins to upgrade weapons.

Catapult King offers many interesting, and challenging levels. In short, this is a fun adventure game, and your only task is to use the slingshot to shoot the fortress with the powerful fireball. Try to take good paths to rescue the princess, and destroy difficult enemies. Besides the basic catapult, you also use the great arsenal of weapons such as cannons, slingshot, and many other great skills … to increase the power to rescue the princess. Willing to accompany Nasty knights to win the princess confinement place with a lot of excitement and excitement.