Terrarium: Garden Idle is a pretty simple idle game that you just can’t miss so far. After its release for the Android platform, the game gains a lot of love from the players in the world thanks to its relaxing gameplay and interesting content. During the play, feel free to tap on each plant so that it can produce more oxygen to the air. That’s the basic thing about it.

Terrarium: Garden Idle is a free-to-play idle game developed by Green Panda Games. Just download it on your iOS and Android systems. In the game, all you can do is grow plants to make them emit a certain amount of oxygen every second. And this amount gets determined by what level of growth the plant is at. As you see, the game is cute and satisfying overall.

Trust it or not, Terrarium only makes you desperately want to get a plant or two for your apartment. With calming yet fun gameplay, the game never lets anyone down even a minute. At first sight, you will realize how well-made and animated the app looks, not to mention how it has adorable plants through levels. Honestly, it’s more of a clicker app but exactly a plant care program you can learn.

Not only having the ability to customize the house plant shelves, pots, but you also change the background if you like. People enjoy playing it because it’s easy to plan and addictive despite some defects that still frustrate the players. There would be a few glitches occurring at times. In the editing option, the player freely archive plants and color their pots.

However, the game won’t let you scroll down, and it will choose a plant automatically, not your own choice. In other words, It’s a bit wasteful for you to struggle hard to achieve the one you like to edit. Apart from that, you’ll love its simple and aesthetic appearance plus the basic controls that seem minimalistic. If anyone asks for variety and creativity, then Terrarium: Garden Idle is the right one.

During the game, there are a couple of boost options available for you to use and speed up the oxygen production. These tend to include Fertilizer, Intensive Watering, and Repellant. Once utilizing the boost, the countdown timer will show up and operate until you could avail of that boost again. If not, come to watch an ad to make all of these boosts available once more.

Cultivating plants is fun, but how about the weed? If you’re interested in exploring something different, then try Weed Firm 2: Bud Farm Tycoon for the full experience. The game lets you grow a weed farm empire with loads of marijuana strains, including the famous White Widow and Purple Haze. Unlike Terrarium: Garden Idle, you can customize the shop with a bunch of useful items.

Those would help you keep yourself safe from intruders. Does it sound exciting and dangerous yet? For those seeking a chill and cute idle game to relax, try Terrarium – it’s a perfect way for you to take a rest, get calm, and zen without needing to practice Yoga. After all, there comes one point where you have every plant in the world, which is pretty much a great thing to do on a mobile phone.

Come to try the most entertaining crop game where you need to discover, gain, and grow the loveliest plants. Let’s increase your oxygen income and then expand the whole garden. Also, you can make money with ads, which is not a bad thing like other games where you view the ad every second. The game itself is super nice, a kind of calming app to us.

Everything is nearly perfect, and we just love to introduce it to everyone. However, once you level up the plants to the maximum, we’re sure that you might get puzzled if it’s done or not. Therefore, it would be better for the developers to make it more clear once it gets completed. For example, you can receive coins for finishing each plant, and something like that.

Another issue that needs to get fixed is the shelves. The archive sometimes doesn’t work at all. Once these are full of plants, you must drag and drop them into the archive to free up space for new plants. However, according to the players, they haven’t put one to stick in the archive because they often bounce back onto the shelves. This causes frustration a lot.

After playing the game for a while, you will have no stress at all. People just love the graphicness of the plants. Most of them look very pleasing and adorable, especially when you can plant and cultivate all of the available plants indoors, fruits, and flowers around the world. Once playing it, you might learn one little tip that does not ever plant more than one of the same plant. 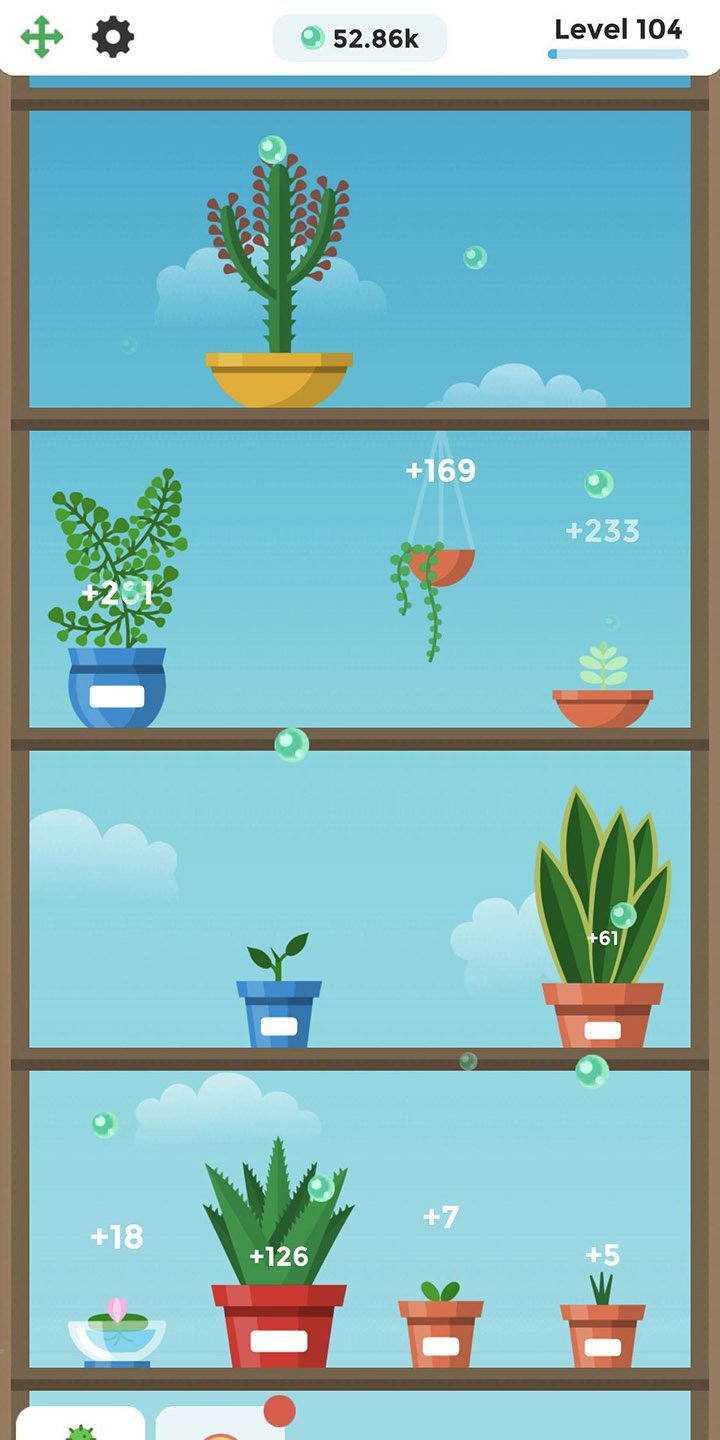 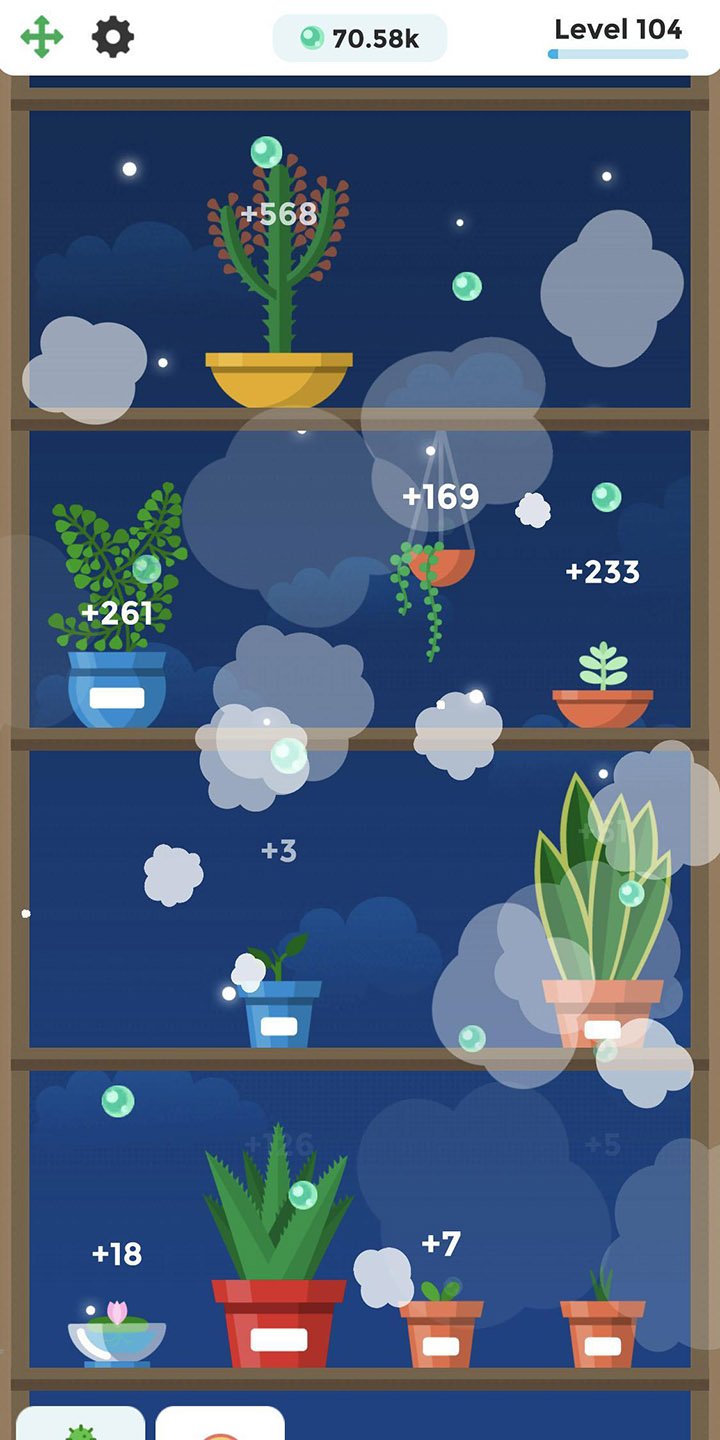 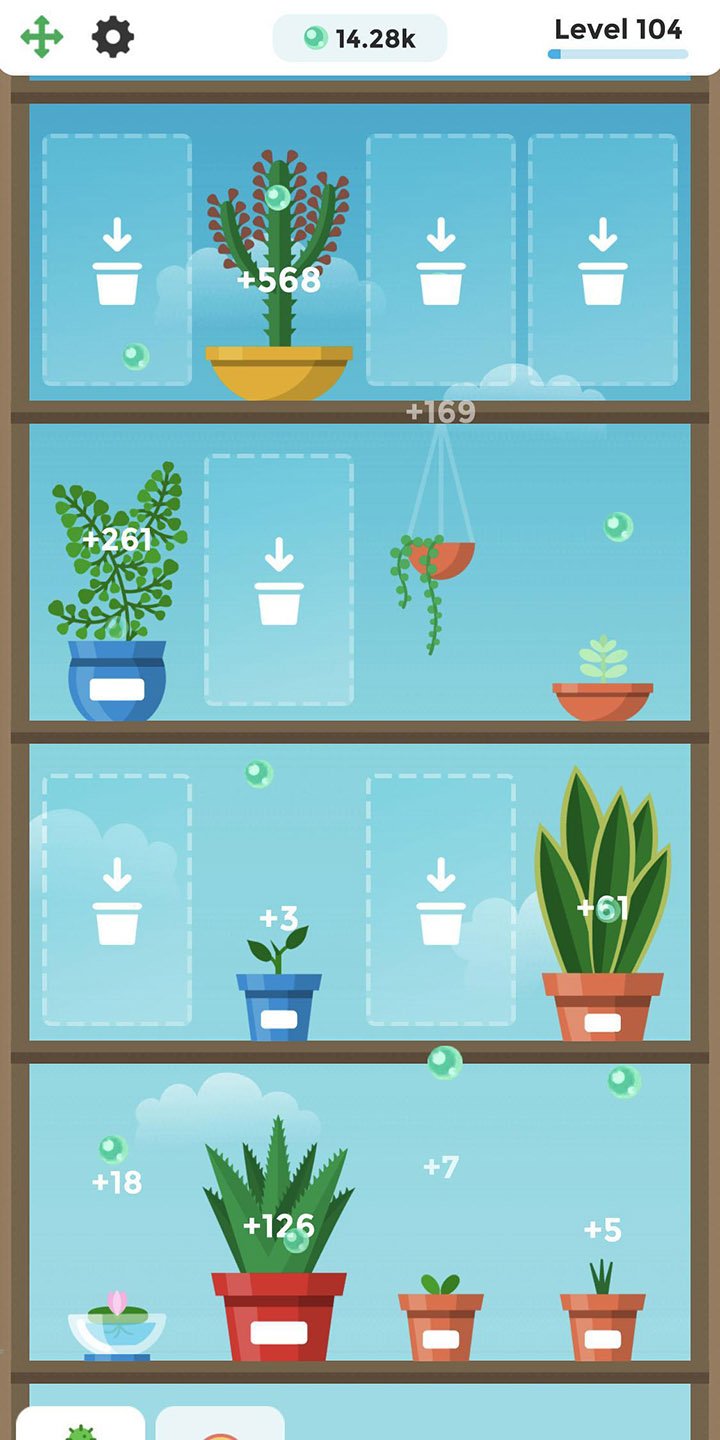 Terrarium: Garden Idle is a basic idle game that allows all purchases to increase your ability to make more money. Use the currency to make more in-app purchases for more abilities you want to have. While raising plants, oxygen is exactly the currency of the game, and you can use it to buy everything.

If this is the first idle game you’ve ever played, it’s a quite simple one and you just shouldn’t have much trouble. All you must do here is purchase and upgrade plants as well as tap each of them to earn more currency. At the same time, don’t forget to cast more skills in the rainbow to make more money.

As an idle game, the first thing coming up in your mind that no mistake could be permanent. Once spending lots of oxygen, the only currency you can use in Terrarium, on something really silly, then it doesn’t matter since you can earn that back and spend it somewhere else. Do not stress yourself and just relax while playing this game.

Besides, collecting money enables you to level up fast, and these level-ups should be claimed by the act of tapping the “level up” button in the top right corner of the screen. Leveling up would help you unlock more new plants and spaces on the shelf as well as receive a bonus of oxygen.

Last but not least, Terrarium: Garden Idle only lets the player register two fingers for tapping and only on two various plants, not one. Thus, if you want to get oxygen fast, tap the top two plants with two fingers.

Both graphics and art are quite simple, but just cute, which is one of many reasons for everyone to fall in love with this game. Not just the animated graphics, but also the plants and the tap vibrations all look gorgeous. The only thing some players regret about the game is that there are no more weird plants to gain after they finished level 190. So how to get a new plant at the moment?

The only way to do it is through your daily log-in screen, and you will receive one new plant every five days.

We’d like to recommend this idle game 100% to those who love plants or those who have been feeling stressed recently. Terrarium: Garden Idle offers a soothing way to take your whole mind off things because when growing plants, you feel like being more productive than ever.