Disney Frozen Free Fall is a 3D puzzle game with cute squares. The game is about Frozen Princess in the movie of the same name. The game has a variety of cute content with more than 1,000 interesting levels.

Disney Frozen Free Fall impresses with its simplicity, and the content is suitable for everyone. You are on a puzzle adventure in Arendelle Kingdom. The content follows the script from the animated film of the same name by Disney. You meet familiar characters like Anna, Elsa & other favorite characters. The game is a fun journey as you have to have hundreds of ice boxes to overcome the challenges. The simple game genre is so addictive, and the 3-box puzzle element is prerequisite. You use beautiful colorful tape to match the shapes. Of course, the more complex the puzzle, the more skills you need to gain. The stacking abilities increase the damage of the ice cube. The content is full with familiar elements from the movie “Frozen”, so you will also discover the young Elsa & Anna journey. Over time, you unlock other characters like Olaf, Sven, Kristoff, Hans, and Pabbie. Each character brings different special experiences and skills to help you increase your excitement. For example, you use Anna’s torch to burn entire rows of ice crystals, or you use Elsa’s glacial power to erase all ice crystals of the same color. The game has a lot of characters, and each one represents a different personality. Try using Hans’s sword to forcefully slice through the ice crystals. In addition, the game offers a bit of a constructive element through the ability to customize your own Plaza in Arendelle. After each level / level, you collect coins and rewards and unlock shops, fountains, street carts, and more. Each one decorate the castle differently, and you share your personal wonderful with your friends. Of course, the game also supports “Google Cloud” for you to synchronize the game progress. If you are a Frozen fan, or love simple style then this is the game for you. 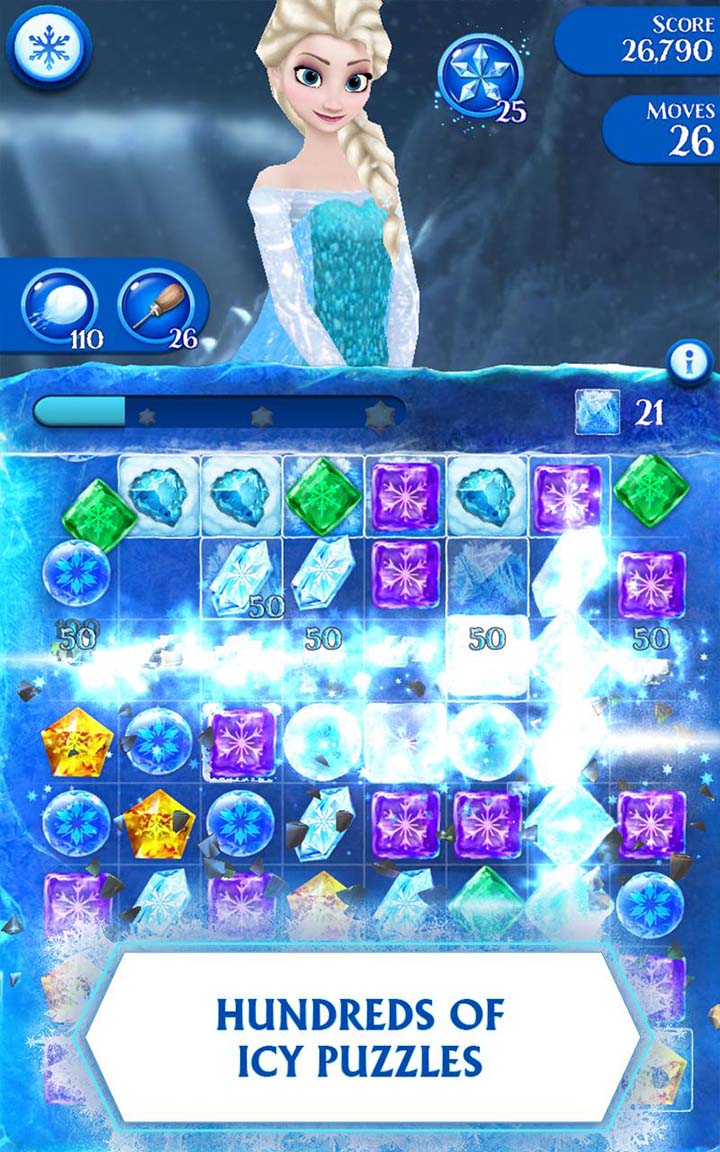 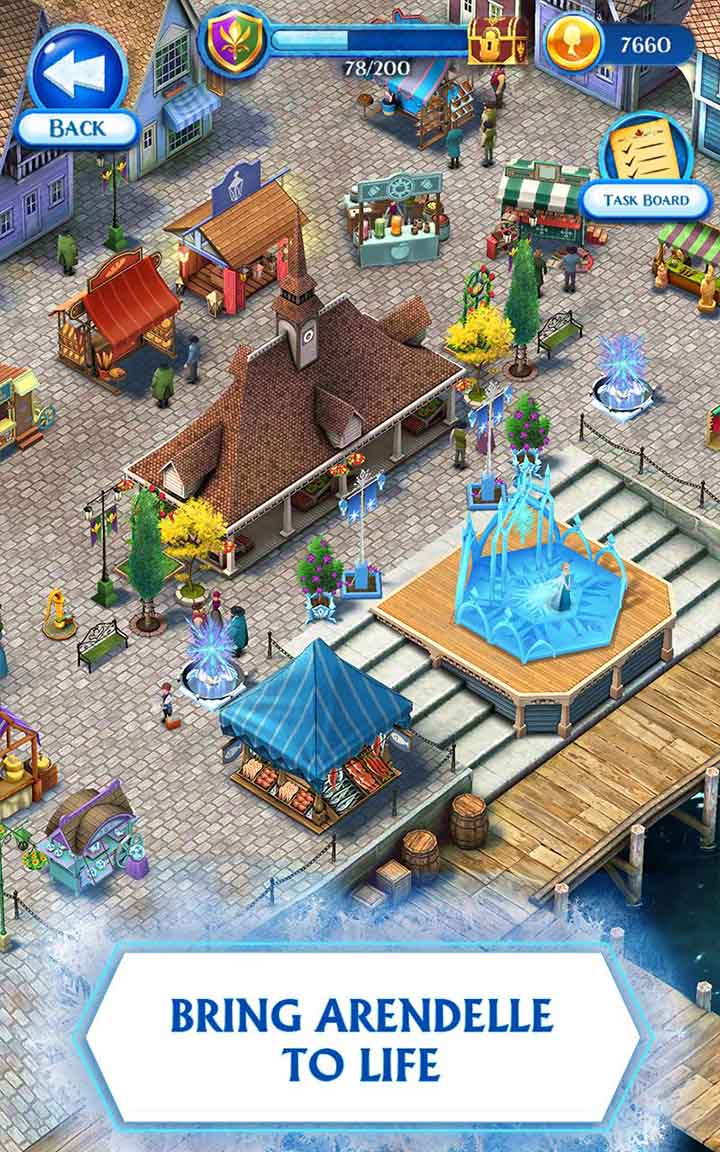 Disney Frozen Free Fall was built from the Disney animated film of the same name, Frozen. You along with Anna, Elsa and other favorite characters join an exciting ice-breaking journey. Your ultimate mission is to complete a puzzle adventure in Arendelle Kingdom. You move the positions of crystals of the same color to form a row of 3 or more. The stronger the connections you create, the easier it is to break a series of ice fragments. For example, if you destroy 4 ice cubes you will get 1 sparkling crystal with the ability to destroy horizontally or vertically; If you destroy 5 ice cubes you will get a snowflake with the ability to destroy all crystals of the same color on the board. The more tapes you can score, the more destructive it will be. Especially, if you reach the target of the level, the system will randomly destroy the crystal rows to bring more bonus points. The game has a full character system, and each character will own a type of ability such as princess Anna with a torch that will melt a row of crystals, Elsa with the ability to vanish all crystals. Hans and sword will shatter crystals of the same color in any row, … Besides the character’s abilities, you can also use support items such as brush to shatter a Crystal pieces, or snowball for 5 more plays, … The game also brings building colors when you unleash green trees or lovely bushes of flowers for Arendelle Kingdom. Each interesting building will help you accumulate bonus points and gold to open attractive gifts. 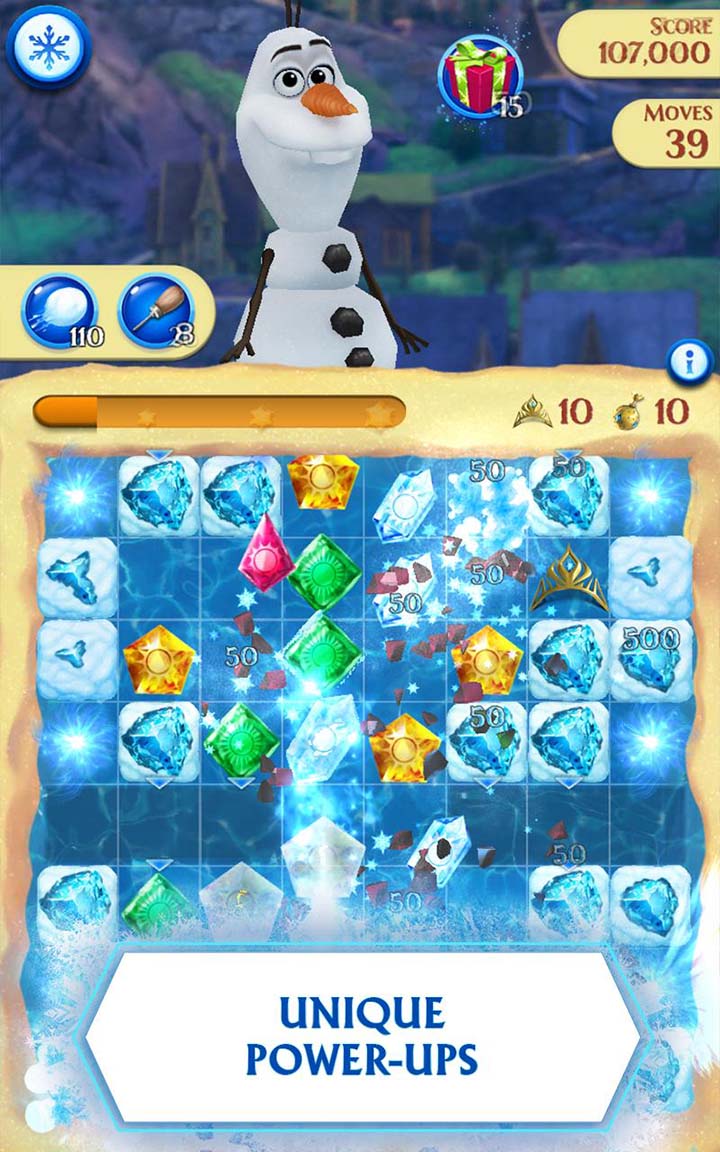 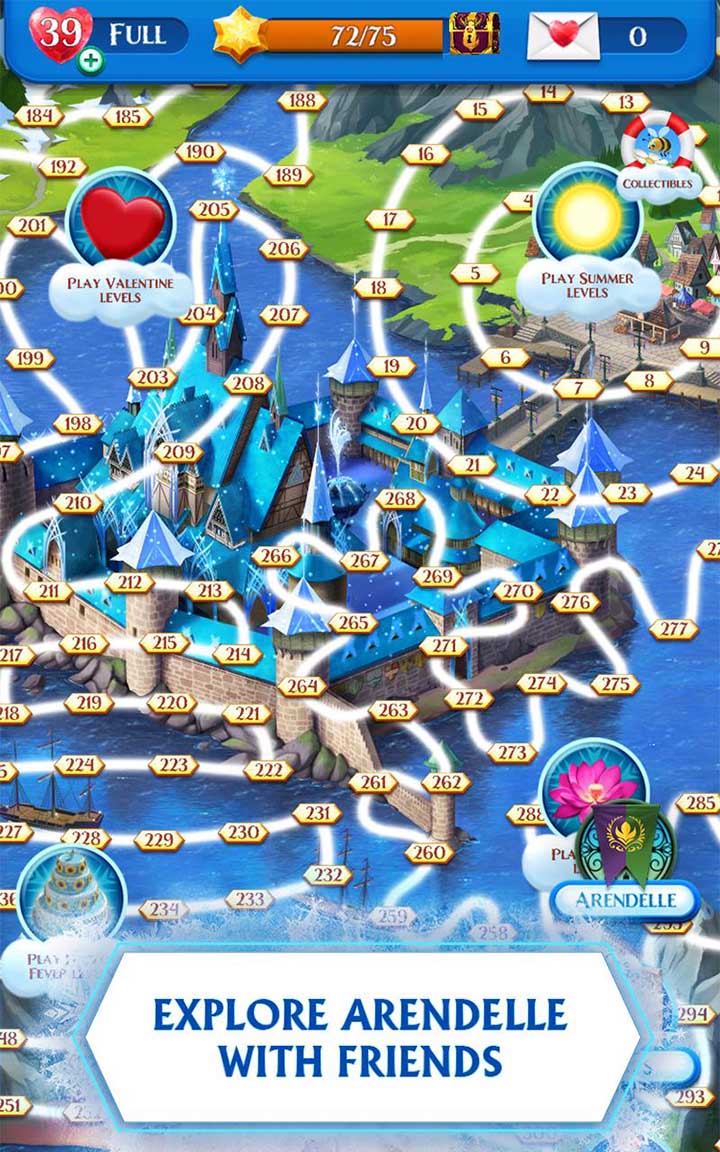 Disney Frozen Free Fall owns a 2D Graphics platform with full details. Lively game interface with cute characters like snowman Olaf, beautiful queen Elsa. The game uses bright, warm colors with colorful crystals such as blue, red, purple, yellow, … Besides, the game also has a melodious soundtrack but no less dramatic . In short, Disney Frozen Free Fall is a 2D puzzle game suitable for those who love the hit animated movie Frozen. The game gives you many intellectual challenges with colorful crystals, super cute characters and unique effects. The game is suitable for both adults and children who love cartoons. If you are busy looking for entertainment after stressful working hours, then Disney Frozen Free Fall is the right choice.