Dream Town Story is an interesting game of Kairosoft’s series of construction games. The primary task when playing the game is to build towns, sell houses, and upgrade shops. Then, you can count money at the end of the month. But the game does not allow players to relax. Players will have to calculate carefully when building a certain structure.

Anyway, Dream Town Story is still a simple management-themed game that you should try out at this point. No terrible graphics, no eye-catching effects, or a deep story, just a few 8-Bit images are enough for you to fall in love with it. Although Dream Town Story is still a pay to win game, the publisher Kairosoft’s game has never disappointed gamers. The path to becoming a village head is still far.

The story of Dream Town Story is a story about a young man. Suddenly, where he inherits the land passed down by his family. That land was also very unspoiled. So, the young man built a village for people from all over the world to gather to live. The path for becoming a village chief is as simple as that. However, building a village is one thing, running the village to a village is challenging.

The classic but very effective 8-Bit pixel graphic style has brought a familiar and casual feeling to this game. You will start arranging roads, planning land for people to rent houses, building various works to improve the standard of living for the village, attracting more residents more, and collecting money only. However, the buildings in the game cannot be built without bluff, except for houses.

You must own in your collection to build. The number is also very limited. Build large buildings so that people have a place to work, restaurants to increase their stats. Then, theme parks, urban landscapes, and public welfare works can boost moral citizens. Do not forget to put trash cans for the village to meet the standard. A lot of things to build, but the house is not available is the challenge.

So, if you want to find those works, we can find the answer in two ways. One is that you complete the game’s requirements and get a gift. The other is through purchasing special packages through some special stats sold in the shop.

Fortunately, those indicators are also easy to get. These indicators are also useful for other things, such as organizing events or reclaiming unknown land for village expansion. But do not be too eager to build many works because we limit the needs of the people. If you build too much, and your business suffers a loss to bear the maintenance fee, then you can make money to make up for all the losses. This Dream Town Story makes sense.

How to Play Dream Town Story?

We must place local houses close to each other and close to work so they can still make money. But at the end of the month, they have to pay their rent. Otherwise, both the mayor and the people will be hungry. Stores always have separate combos that must be placed side by side to increase sales. For example, we must place vegetables next to fish, or flower shops must be next to supermarkets. If you build a miscellaneous house without planning, it will deduct you for the cost of maintenance.

Elderly people cannot walk much, so they have to put their houses near places convenient for them to travel. We must place students near the school. The mayor also has to do many other things such as helping people get their dream jobs. Some occupations sound weird, like being a prodigy, a ninja, or a hero.

The guy who looks like a handsome prince in Snow White dreamed of changing his career as a manga artist. The gentle younger sister dreamed of changing jobs as a fisherman. And young people living on earth too long and bored want to change jobs to aliens. From time to time, people will take the exam who is smarter, who is more beautiful, who is more talented, but often fails more than pass. You must also motivate people to love each other, get married, and live together.

When you unlock a new store, do not build it. It is best to research to see we can build together which stores to form combos. Otherwise, the revenue will not be enough to cover losses on infrastructure maintenance fees, not to mention land and waste. It does not require a large number of stores. Each structure has a limit on how many they can build. The cost of the next construction will be higher than the previous one. If you want to rebuild it, you will regret it because it is too expensive. 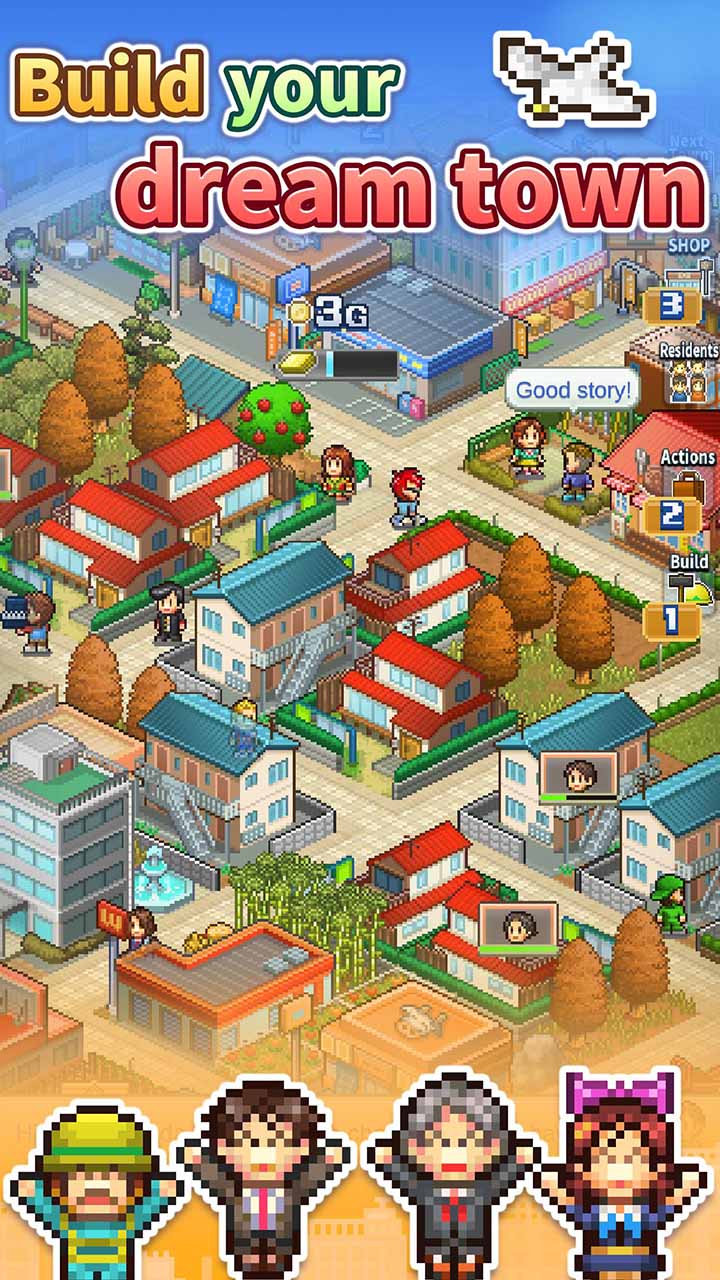 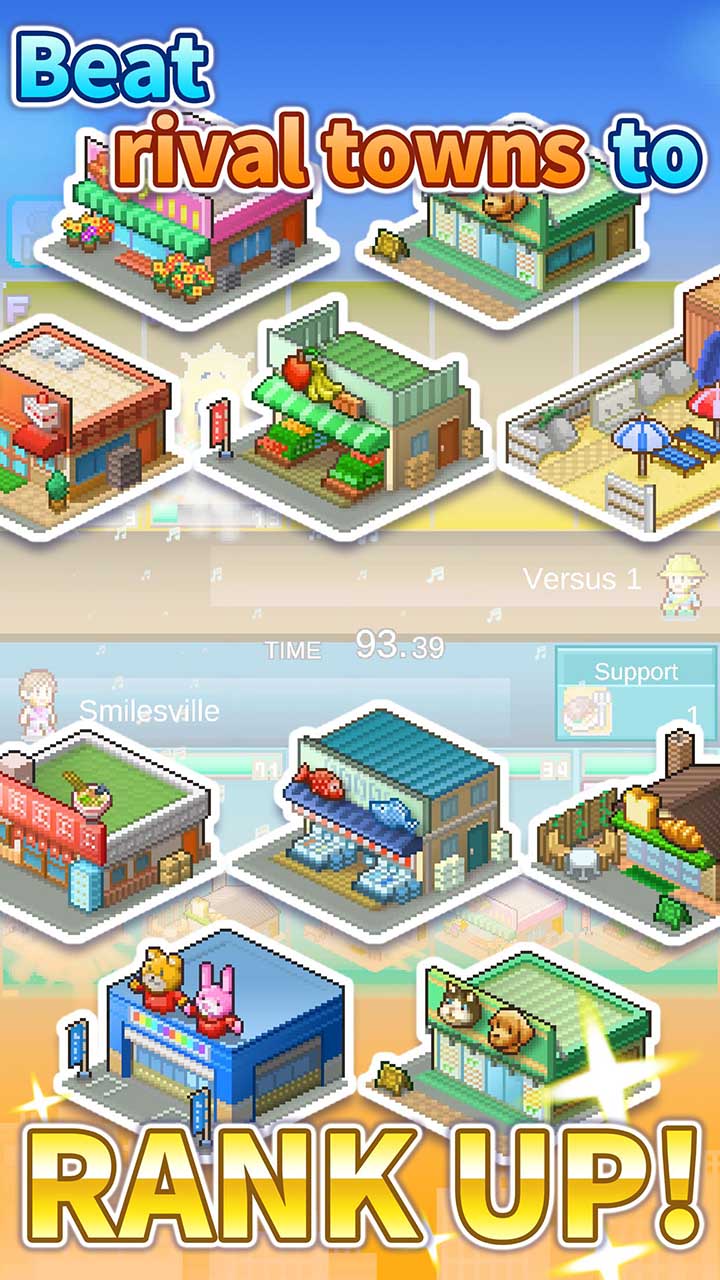 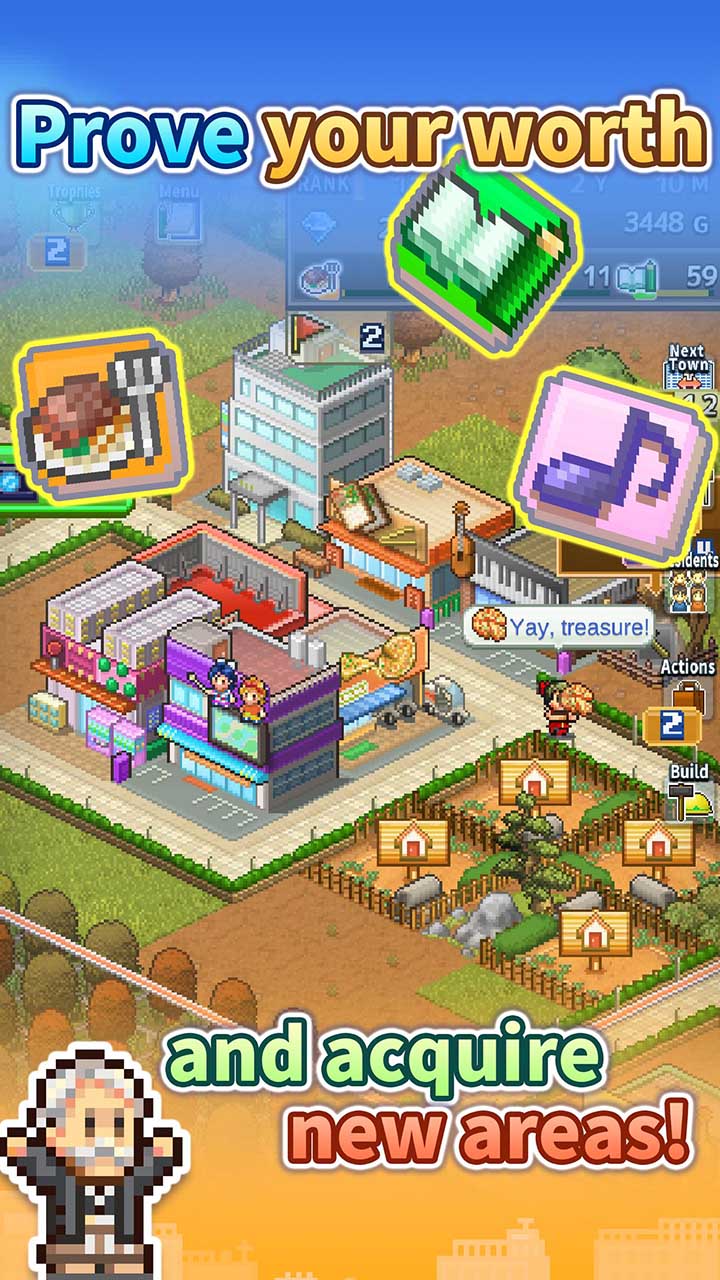 Once the population crowds, then you have to expand your village. One is to build a system of more winding roads to recruit as many people as possible. The second is to expand the realm, reclaim the land to have more space.

Every time you intend to live in an unknown land, calculate carefully because the old owner will not let you rent a place comfortably. The old man will offer strange tenancy terms that you will have to complete if you want a little of your money and effort to pour down the river. And the relocation and redistribution of houses are also a notable issue.

A free mobile game cannot be so convenient. Dream Town Story is no exception. There are a few restricted things that you have finished listening to also inhibits a lot. The first is that moving houses or buildings in the game is a pain. The strangest thing is that it does not cost any money to destroy it. But if you move your house to another place, you can only do it twice a day. Want to do more, let the money go.

The second is that no matter how hard you plow in operating your village, one thing is certain: that you will lack all kinds of resources or stats. From breakeven to loss, there are months with negative money. If you build it a little, you cannot increase the population. But when you finish it, compensate for the business losses for a few months, even in the city center. Sometimes, if we want to buy or expand the road, we do not dare to open it. We are afraid to open it, and then our people are not interested. With countless mobile games flooding the market today, a simple graphic game but in-depth gameplay is sometimes a strange food for discerning gamers. As expected, Venture Towns is like a miniature version of the famous city-building simulation game SimCity. You will live in moments as an actual manager with problems to be solved.

But unlike other in-line titles that throw you in a bunch of metrics to keep in mind, Venture Towns takes you into a miniature world with instructions constantly popping up to remind you on the right track to becoming a taste talented mayor. Starting the game, the game gives you a certain amount of capital with some pre-built structures with the first townspeople.

Dream Town Story allows players to play the role of a mayor who has just been inaugurated. You develop his hometown to be as prosperous as possible. Starting with paving roads and land planning, players will have to attract as many people as possible to develop the economy in their town.

Each resident in Dream Town Story will have their lifestyle and preferences. And you have met all their requirements and preferences. For example, this guy is a freelance who loves games and cake. The other girl wants to invade the stock market and has a hobby of walking in the park. The game will bring relaxing moments when allowing players to feel real-life activities in the game.

Dream Town Story owns an 8-Bit graphics platform full of fun and color. And you have to help them live in the freshest and most comfortable atmosphere. The more happy residents, the stronger your town’s economy will be.