Grand Prix Story 2 is a new racing simulation game from Kairosoft. In the game, you will control a Formula 1 racing team to take part in a series of tournaments around the world. Besides the usual racing mechanics such as acceleration and steering, you can also upgrade and install new decorations for your racing car with improved parameters such as speed and recoil. You can also train your racer more to achieve the golden steering wheel.

Kairosoft, the developer of Grand Prix Story 2, believes that everyone should be familiar with the game. The game still upholds the excellent pixel art style and playable game elements of the past.

We believe there must be a lot of friends who paid attention to this game when it was first launched in Japan and expected it to be launched worldwide. We expect it to be worth it because it is an amazing game.

Since the game is Grand Prix Story 2, we must relate it to racing. The game lets us be drivers to compete with others. It also allows us to build all kinds of racing cars. Players need to form a racing team of their own and take this team to become famous all over the world.

Grand Prix Story 2 is Kairosoft’s unique and interesting mobile game landing on the mobile platform. It is a very charming game that can be downloaded right now. The game is a simulation game and the player’s task is to build a racing team and conquer the speed records.

First, everyone needs to choose a racing car and lose to the mechanic to rebuild it. Each track requires an unfamiliar vehicle. So gradually, players will need to build an entire workshop to prepare for the next race. Then, the team needs to have a racer to drive.

Therefore, players need to hire a few riders and train them in the pro skills before they can compete. As players progress, players can upgrade vehicles to ensure their competitiveness, even add nitrogen oxide gas kits to break through the speed and overtake their opponents. The game offers a very interesting design on the track. 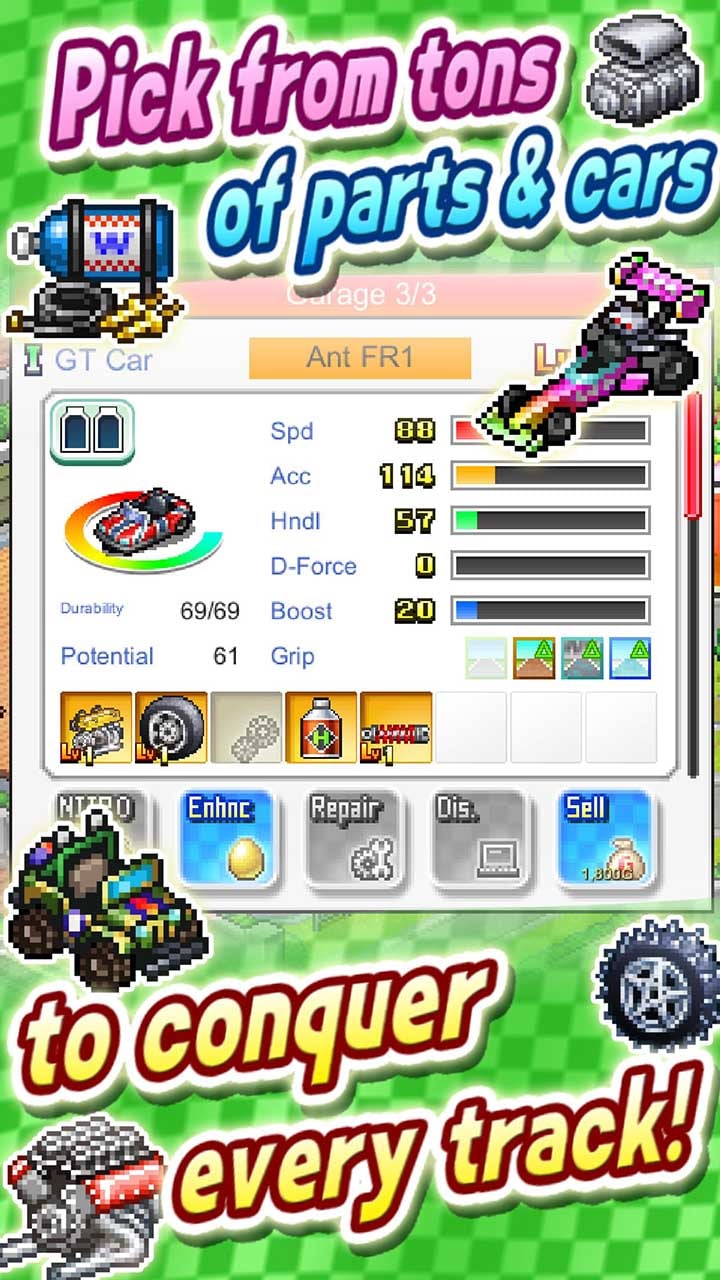 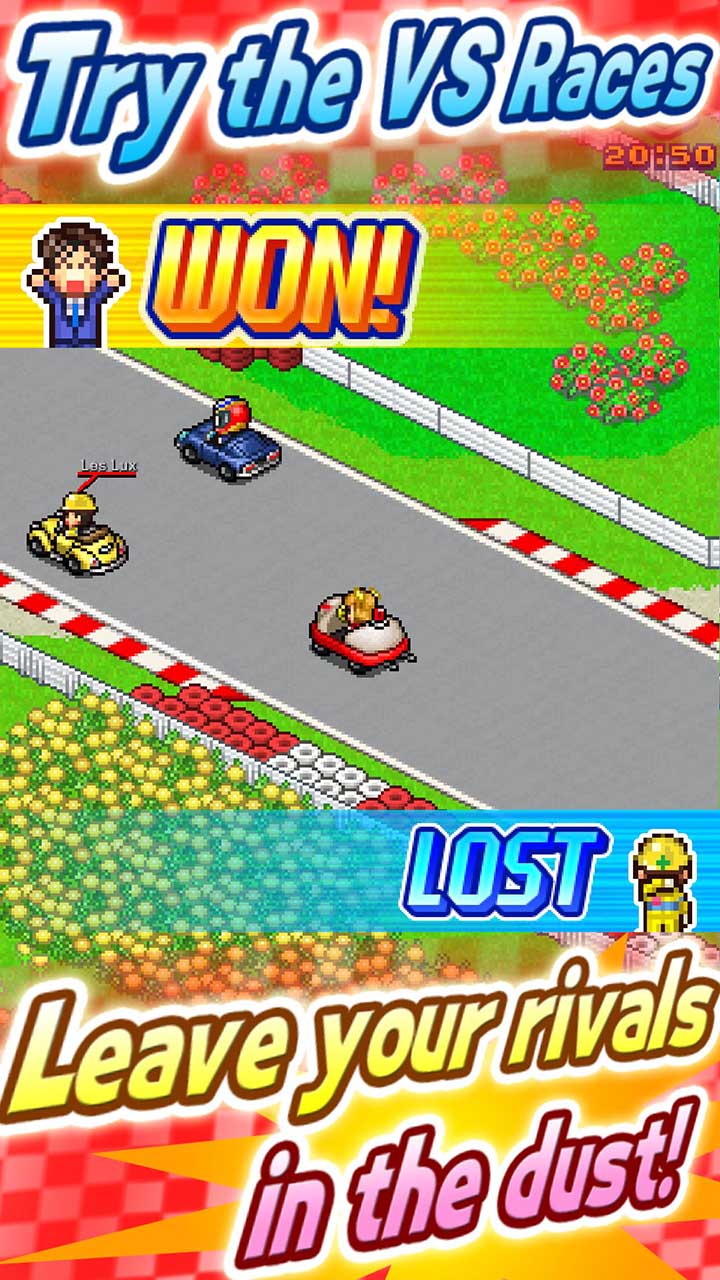 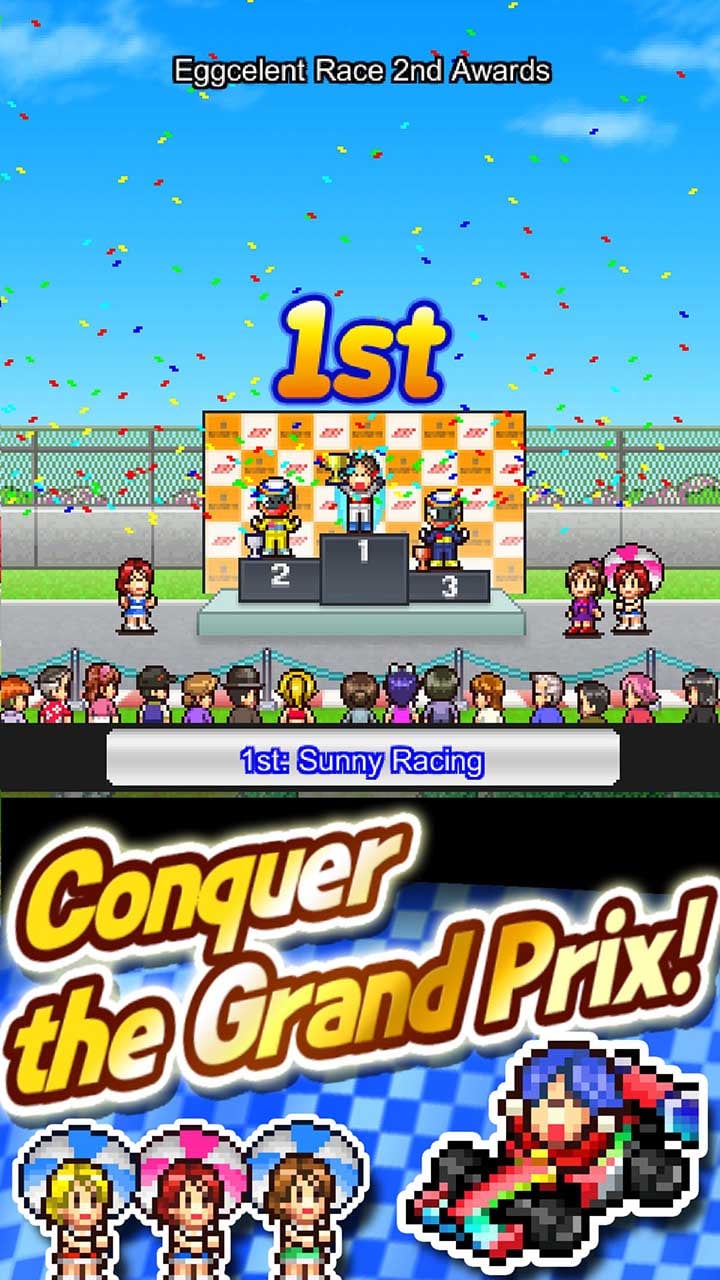 How to Play Grand Prix Story 2?

Since it is a racing team, an excellent racer is essential. Players can hire racers of different levels according to their financial situation. The higher level of the racer, the better the results are. But when we first started the game, we were not rich.

It is not enough to have a racer. We also need to hire some guys to handle the daily chores of the team. Fortunately, the game is equipped with a beautiful secretary for each player to help players manage the foreign affairs and financial situation of the team.

This hired character is very loyal to the players. When the player has a financial deficit, he will use all his savings to contribute to the team, but only once. The basic personnel of the racing team is complete. But there is another important thing, a professional racing car. We need to assemble a racing car for competition. With the continuous improvement of the player’s team, an excellent model is available, but it is expensive.

After we assemble the car, go to the race. While making some money for the team, you can also see how strong your drivers are. As the experience of the player team increases, the competitions available for participation will continue to increase. And the corresponding game prize money will continue to go up. Players need to choose one of the available matches to take part in.

After we select the game, players need to wait for a while. And when the game starts, they can start. Before the official race, there will be a qualifying race. It divides the lanes according to each driver’s performance in the qualifying race.

After entering the game, players only need to watch the game silently. Everything is out of our control. After we complete the competition, it will display the specific results of the competition. Each time we complete a race, the team’s car will be upgraded, which is directly proportional to the specific performance of the driver in the race.

Then, the exciting moment comes, the awards. If your driver does not get the top three, there is no exciting moment. After each race, the entire team must work together to repair the car.

We also need to train the drivers we hire from time to time so he can perform better in future races. It is also very important to upgrade the car. Although the upgrade requires a certain amount of expenditure, we can exchange it for a good ranking in future races and a considerable race bonus.

The team’s personnel will also develop some methods and parts to improve the performance of the car. So, the car will perform better in future races. However, research and development require a certain amount of research data expenditure.

Players can get research data during the game or by scrapping unnecessary cars. When your team becomes famous, some sponsors will come here hoping to give you some financial support. They hope you can help them advertise.

During the game, we will intersperse some important news and announcements from time to time, and players can use these announcements to understand some current situations. The game has multiple save points to facilitate players to continue and exit the game. 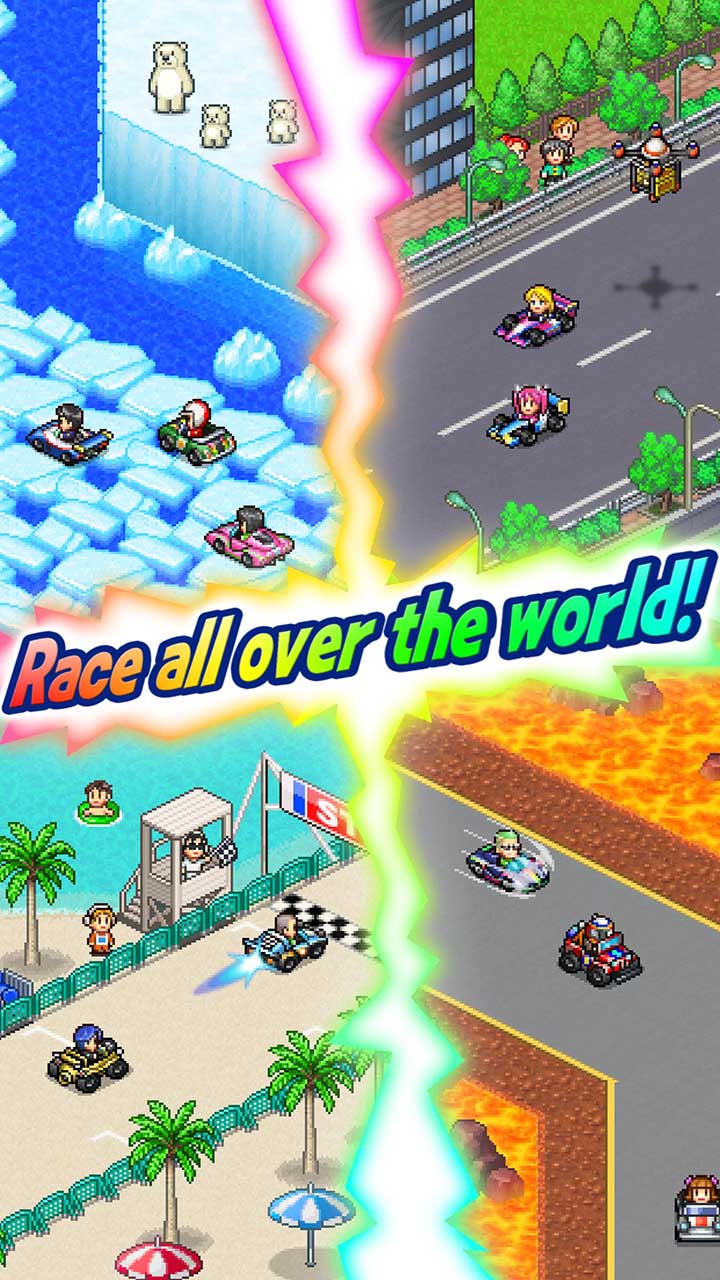 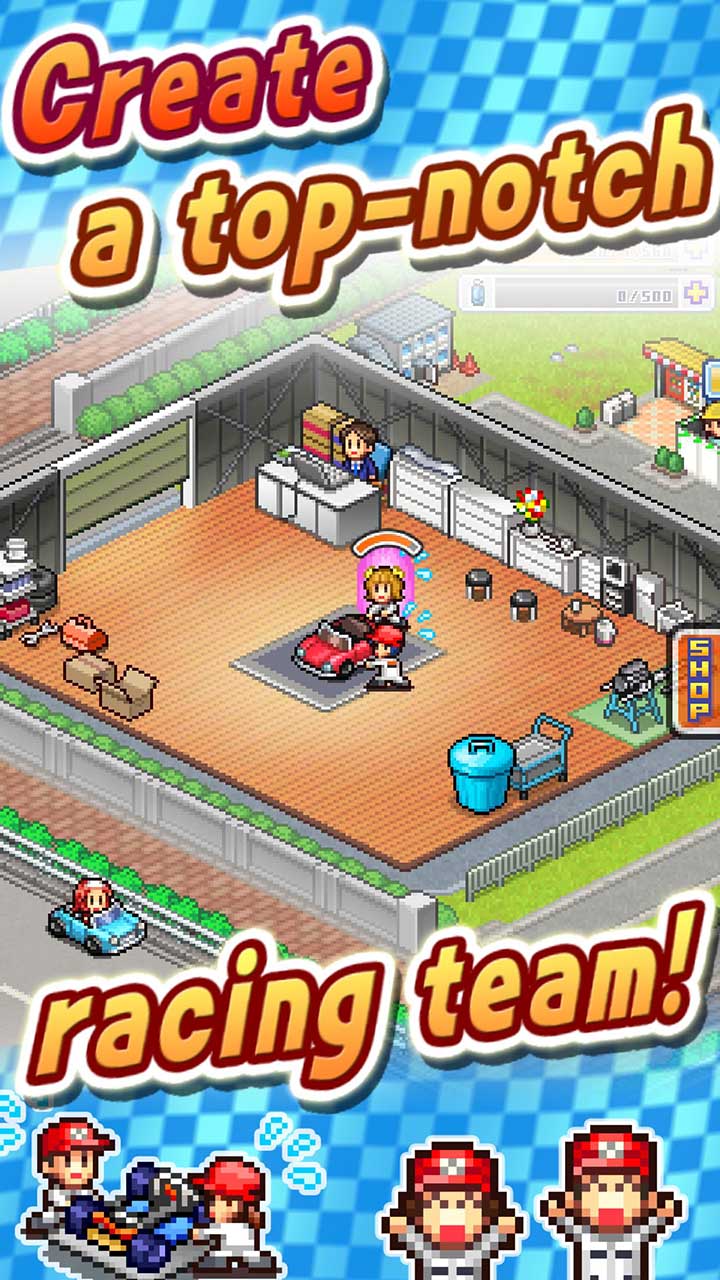 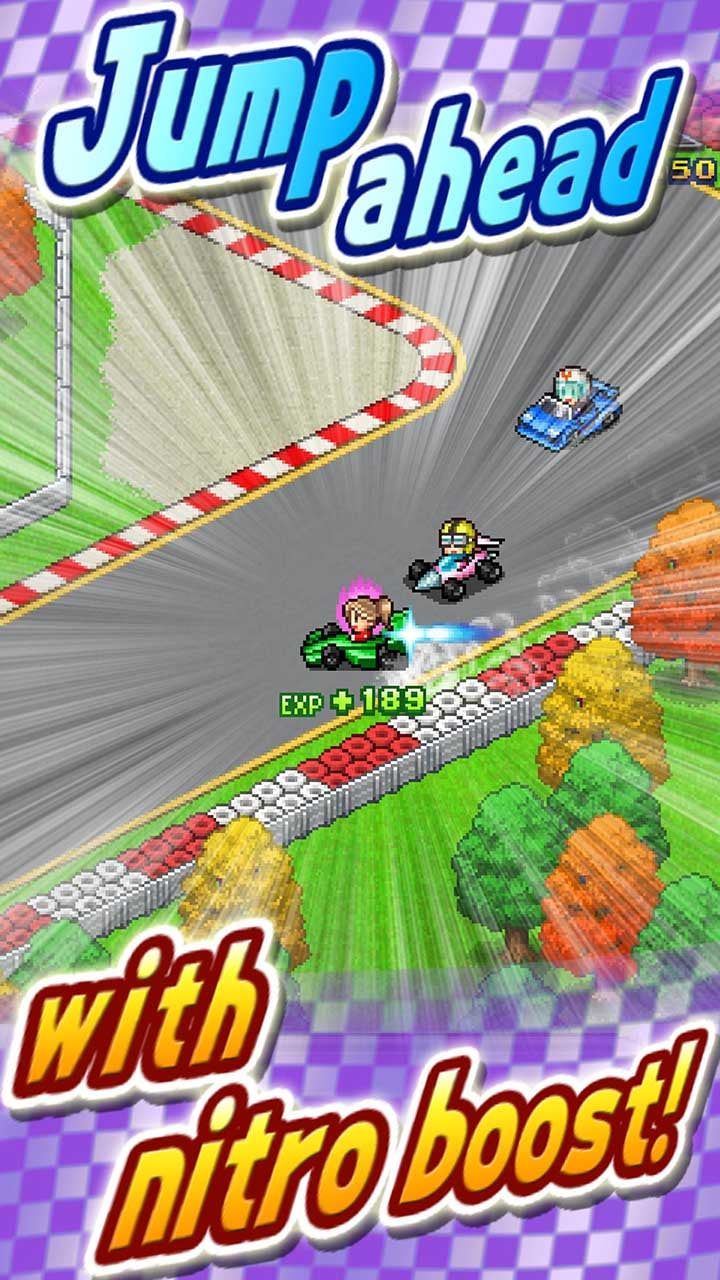 Game Dev Story is a fantastic simulation game that puts the player in charge of a video game development team. Thanks to its originality and a lively sense of humor, this game of the Japanese Kairosoft has received good acclaim from critics and audiences. To allow even the most skeptical to try the game, they have published a lite version of the application on the App Store. It limits the differences only to the duration of the adventure. Nothing is missing for what is present in the complete edition. But if in the latter version, you can continue playing for 20 virtual years, Game Dev Story Lite offers only two years.

Unfortunately, two years in the game go quickly. And to explore everything, affirming your development team to make games for the most modern consoles, go to the full edition. Although the developers have hinted nothing from this point of view, fans hope that new updates and support for Game Center or other social platforms will arrive soon.

Although the Grand Prix Story 2 racing story is simple, there are many ways to play. There are very few activities for players to take part in at the beginning. As the game progresses and the team experience continues to accumulate, many game modes will be one by one.

The unlocking is presented, and it continues to surprise players. It is a rare development game. If you like simulation games and are a racing fan, then you must try Grand Prix Story 2 MOD APK. In this game, you find that this game will bring you surprises and new game elements.