For those of you who’re interested in the classic catch ‘em all gameplay with the likes of Monster Legends and Pokemon: Magikarp Jump, you’ll surely find yourself enjoying yet another great mobile game with Dynamons World. Get ready for an amazing adventure into the world of monsters and mystical creatures in this new title from Kizi Games, where you can fully immerse in your monster-catching hobby while also having the chances to explore the profound and captivating stories as you progress.

Have fun with the classic RPG gameplay with tons of interesting character and monster progressions. Explore exciting interactions with many unique NPCs and engage in their own interesting stories. And at the same time, also enjoy exploring the massive maps with countless discoverable aspects. Find yourself truly engaged in the in-game stories. And also have fun with the exciting online gameplay with friends and online gamers from all over the world.

Find out more about this interesting gameplay of Dynamons World with our complete reviews.

The game introduces Android gamers to a strange place called the Dynamons World. Here, the lands, seas, and skies are filled with mysterious and powerful creatures called the Dynamons, each having their own unique skills and abilities.

Throughout history and time, mankind has their own friendships with the creatures and gain their trust to become Dynamons trainers. These are the people who dedicate their lives for the causes of training Dynamons and allow them to hone their skills and obtain better powers. But most of the time, the powers of Dynamons were used for a peaceful cause. Thus, life slowly passing by peacefully and prosperously in the lands of Dynamons, up until now.

However, with the Dynamons are getting stronger by the days and their trainers are growing more and more ambitious, the simple training battles between trainers aren’t enough. Now, some people will do everything to get their hands on the most powerful Dynamons and get rid of their opponents, all just to allow them to obtain the best powers of the legendary Dynamons and dominate the world at their own wills.

In the game, you’ll be playing as a young trainer from the Dynamons Camp, where people would learn the art of being friends with these creatures and how to utilize their powers in various cases. Have fun battling with other young trainers to hone your skills and power up your Dynamons.

Find yourself embarking on your own ultimate Dynamons adventures after a sudden attack of a mysterious cult into your camp. Now, your quests must be to hone your skills and power up your Dynamons, while discovering the secrets behind the unknown cult and their targets. Put a stop to all of their schemes with your mightiest Dynamons roster, and thanks to the help from other NPCs.

Enjoy the exciting campaign that will take you through multiple challenges

To start with, Android gamers in Dynamons World will have their chances to take on the ultimate in-game experiences with the exciting campaigns, that will take you through multiple places around the map. Feel free to take on the captivating and engaging stories while diving into addictive stories with Dynamons World. Find yourself fighting against nasty enemies, interesting opponents, and engage in exciting stories. 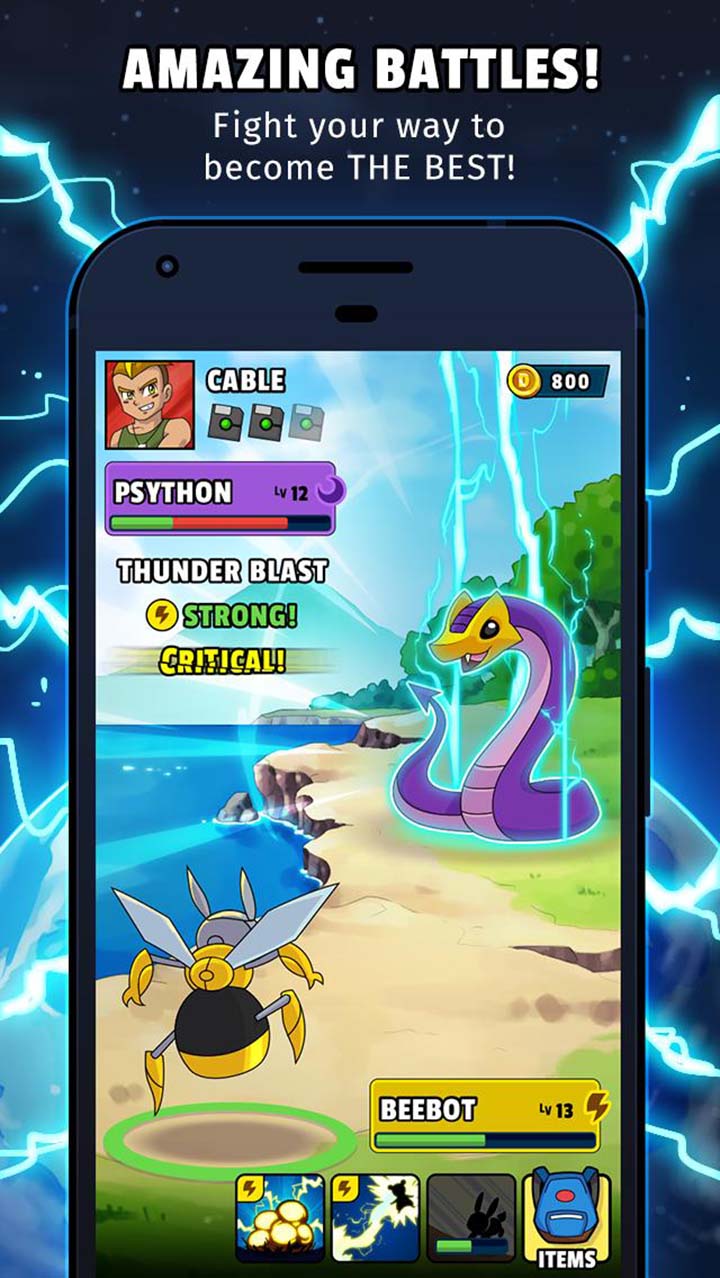 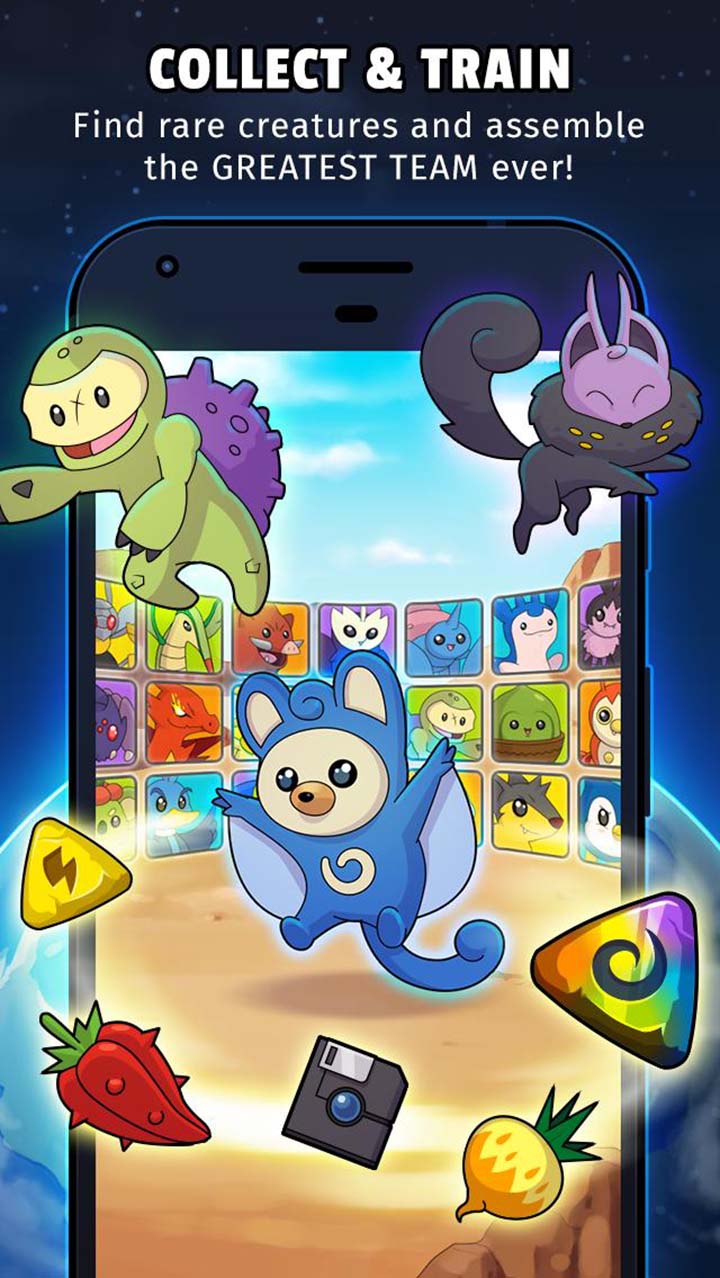 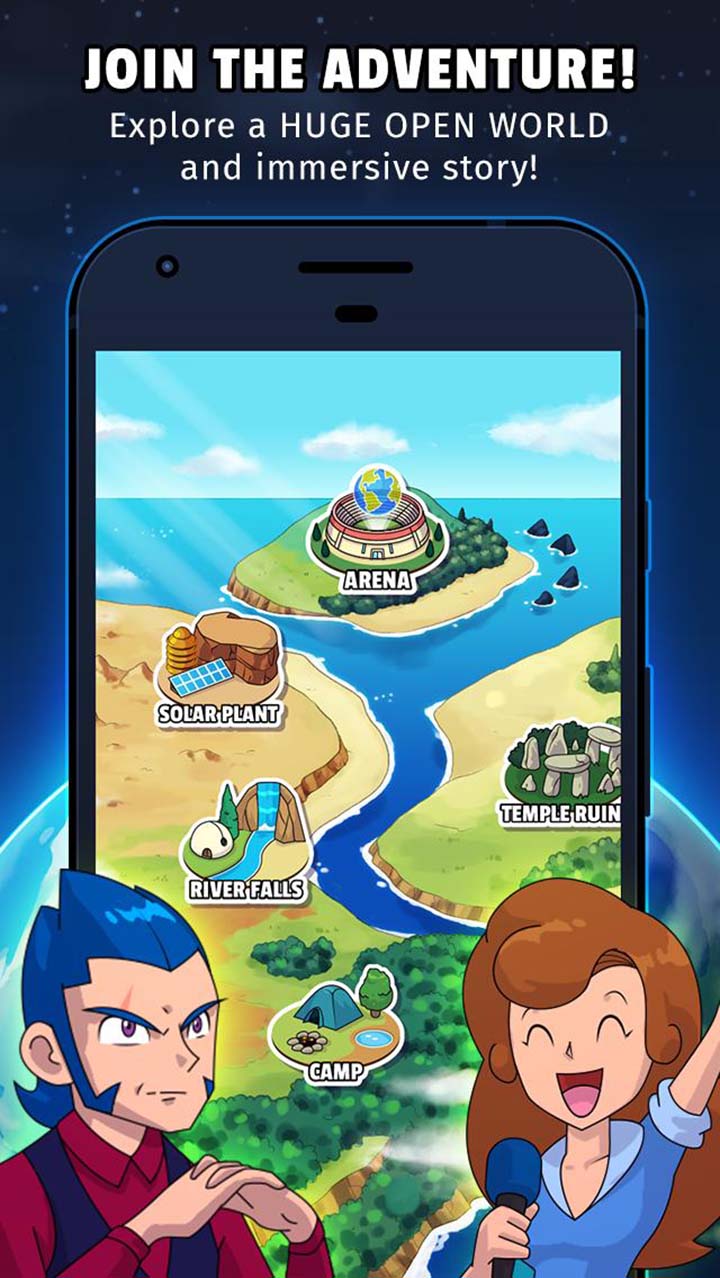 Have fun with the enjoyable online experiences

On top of that, to make the game more interesting, Android gamers can now experience exciting online gameplay, which allows you to free dive into hilarious matchups with friends and online gamers from all over the world. Feel free to explore the Online Battle Arena, where you will find yourself challenging your friends and other actual gamers in epic trainer battles with all your mightiest Dynamons. Engage in awesome 1 on 1 gameplay of tactical RPG, along with the addictive turn-based combats, Dynamons World will allow you to truly enjoy yourself.

Dozens of unique Dynamons with varied powers and abilities

For those of you who’re interested, you can now enjoy the exciting gameplay of Dynamons World with tons of interesting Dynamons, each having their own unique powers and abilities. Feel free to catch, train, and power them up throughout the addictive in-game experiences.

Collect dozens of interesting monster types, train them through exciting Dynamons battles, and have them unlock their full potentials with ultimate evolutions, which will allow them to attain new powers and a lot better stats. Dynamons World will allow all of you to enjoy the epic catch ‘em all gameplay whenever you’re interested. Explore the world of interesting monsters with various species of Dynamons and their unique power types. 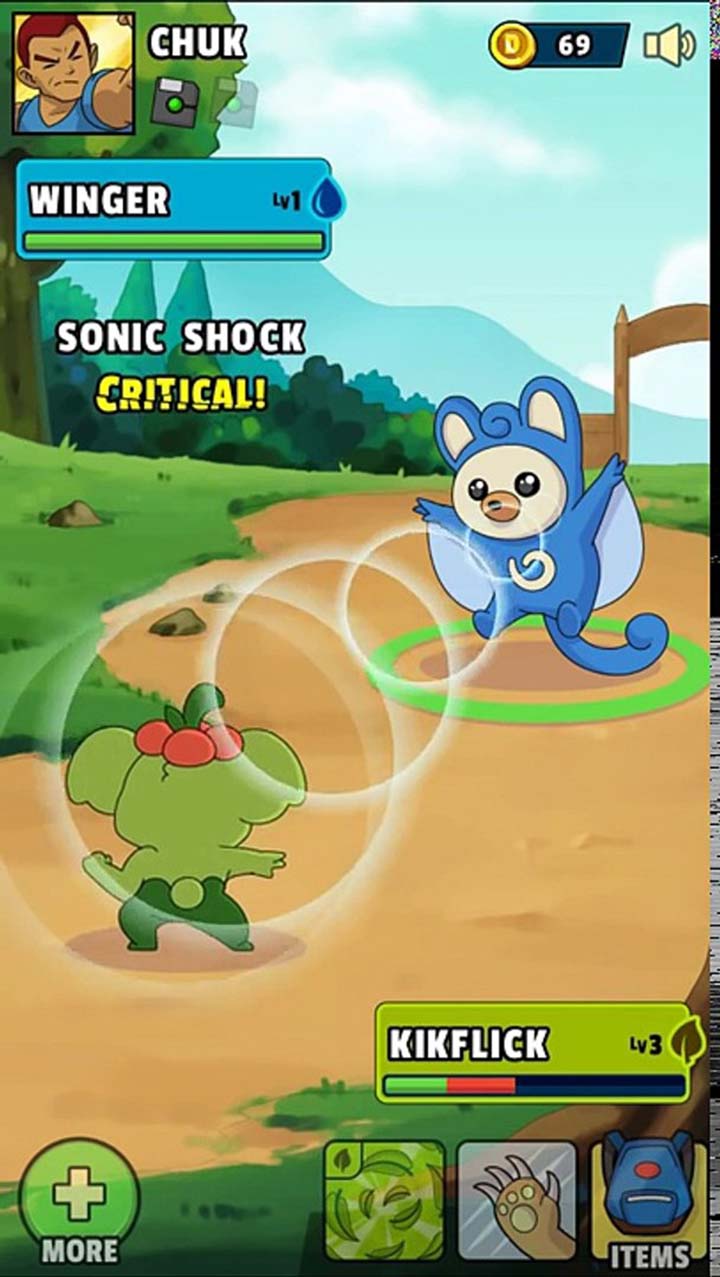 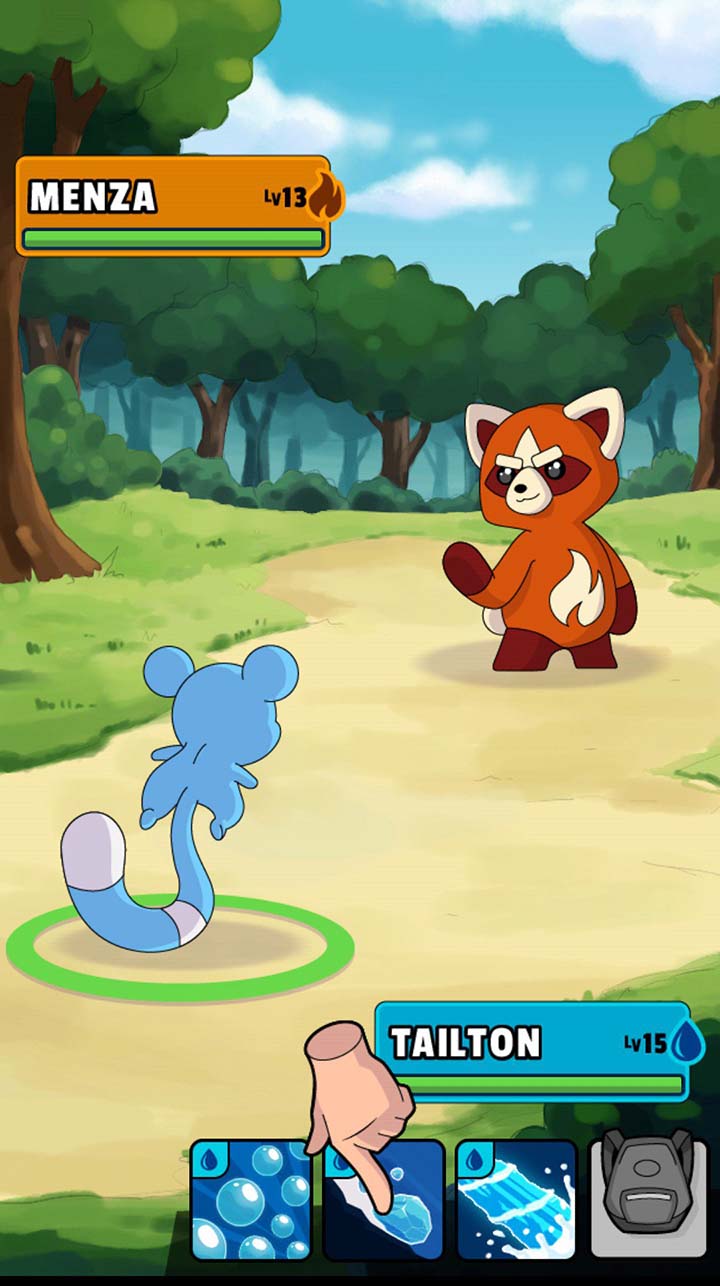 Useful items and boosters to make uses of

Also, to make the game more interesting you’ll also find yourself having access to multiple in-game items and boosters, which can have multiple effects on the gameplay. Feel free to explore the different key items and use them to effectively capture Dynamons, train them, and giving them awesome powers. And at the same time, you can now make uses of multiple boosters and power-ups, which will allow you to effectively boost the powers of your Dynamons in and out of the battles, giving them better traits with upgraded abilities, or just simply to heal up team members when they are low on HP.

Enjoy the tactical turn-based battles with many strategic elements

As you dive into the exciting battles in Dynamons World, you’ll also find the game offering its extremely addictive and enjoyable turn-based battles with many interesting strategy elements. Feel free to build up your ultimate team of Dynamons around various approaches and tactics. Introduce your Dynamons to certain key skills that you find essential and effectively combine them during the battles to win.

For those of you who’re interested, the exciting element-based mechanics will allow your Dynamons to have both contradicting and complementing powers, which would make the team building and battle phases a lot more exciting, as you’re now introduced to multiple choices and options. Have fun as you attempt interesting tactics and approaches with the fights while enjoying exciting team challenges.

Plus, with the new monster type of Dark and Electricity, along with many existing ones, Dynamons World will offer even more exciting team battles for Android gamers to engage in. Also, the improved skill card mechanic will make the traditional turn-based battles more fluent and enjoyable.

Multiple areas on the maps for you to travel

And here in Dynamons World, Android gamers will find themselves having access to a variety of different areas on the map for you to travel and fully explore. Feel free to enjoy the Dynamons Camp where you start your journey with a few initial opponents and challenges. Keep going and explore the River Falls, the Temple Run, the Solar Plant, and more. Engage in many interesting quests and matchups with exciting NPCs while exploring the captivating stories. And finish your journeys at the Arena where you’ll expect the most challenging battles and the toughest opponents.

Tons of new updates with interesting content to expect

And most importantly, with Dynamons World you won’t ever find the game running out of interesting stuff for you to do. Having said that, the awesome mobile title offers its frequently updated Dynamons quests, battles, monsters, and many interesting events that will take place throughout the year. So you will definitely find yourself enjoying the awesome gameplay of monster-catching whenever you’re in the game. Feel free to dive into the experiences and advance through engaging challenges. Always have fun with your best gameplay of mobile catch ‘em all.

For those of you who’re interested, you can now get the exciting gameplay of Dynamons World for absolutely free on all of your Android devices. As a result, you can find it completely free to install on the Google Play Store. Feel free to get the game ready on your devices and start enjoying its awesome content whenever you’re ready.

Also, as you progress in the game, you might find the in-game purchases and ads being somewhat annoying. If that’s the case, then you would want to have our modified version of the game installed on your devices instead. Here, you can enjoy unlimited money, unlocked content, and most importantly, completely removed ads. All it takes is for you to download the Dynamons World Mod APK from our website, follow the provided instructions, and you should have it ready to enjoy.

For those of you who’re interested in the exciting gameplay of monster-catching, Dynamons World will offer you the most immersive and enjoyable catch ‘em all experiences with its powerful visual elements. Feel free to enjoy the beautifully designed monsters and engage in the game with your cool characters. Take on epic fights with incredible visual effects and truly engage in the actions with smooth animations. Dynamons World will allow gamers to always find themselves completely satisfied with their experiences.

Also, along with the powerful visuals, Dynamons World also features incredible audio experiences for Android gamers to truly enjoy on their mobile devices. Here, you can have fun with amazing sound effects, powerful music, and many interesting features. All it takes is a simple tap into the majestic world of Dynamons World.

For those of you who’re interested in the exciting gameplay of monster catching and would love to enjoy your ultimate catch ‘em all experiences, you won’t find a better title than Dynamons World. With in-depth stories, interesting gameplay, and dozens of exciting monsters to collect, you can always find yourself completely hooked to the in-game experiences from Dynamons World.

And most importantly, with the game being completely unlocked and free gameplay on our mod, you can now enjoy Dynamons World to the fullest. Thus, there are no reasons for you to now playing this awesome game, right now.